Welcome to the 1980s! This is the twelfth post in our series exploring the geographic and architectural attributes of Denver’s single-family homes. For previous installments, please use the links below:

The 1980s was Denver’s thirteenth full decade as a city. With 1974’s Poundstone Amendment in place, the days of Denver annexing new subdivisions on its periphery were over; although, ironically, the 1980s had the city’s largest annexation ever: 53 square miles from Adams County in 1988 to provide the site for Denver International Airport. While the vast majority of those 53 square miles was for the airport itself, part of the annexation included a 1.5 mile-wide “flagpole” needed to connect the airport site to the city. So even though the DIA annexation was primarily about creating space for the new airport, a consequence of that annexation was the addition of several square miles of new Denver territory along Peña Boulevard for non-airport development, as well as the opportunity to redevelop seven square miles of land at the former Stapleton International Airport site for residential, commercial, and industrial development.

For Denver (or any consolidated city-county entity in Colorado) to annex new territory, the Poundstone Amendment requires an affirmative vote for the annexation by the people in the county losing the territory. In 1988, after a heated campaign, Adams County voters approved ceding the land to Denver by a 56%-44% margin. A subsequent election in Denver in May 1989 to approve the airport project (not required legally but forced politically by airport opponents) passed 63%-37%. The DIA annexation has proved to be not only the city’s largest annexation in size, but also perhaps its most important from a long-term economic development perspective.

From 1980 to 1989, approximately 4,700 single-family detached homes were built in Denver. This represented the fewest number of new single-family homes built in the city in one decade since, possibly, the 1880s. While we know that today there are about 2,600 homes still standing from the 1880s, the total number of homes actually built during the 1880s, including all those that have since been demolished, remain unknown (at least not without significant research). Regardless, the 1980s was a transitional decade for Denver in many ways.

In the 1980s, Denver lost population for the second census in a row, mirroring so many other large cities across the nation that were struggling with an array of issues including population loss, urban decay, and intense competition from the burgeoning suburbs. During the decade, Denver dropped in population from 492,365 in 1980 to 467,610 in 1990, a 5% decrease. While Denver and many other big cities reached a nadir in the 1980s, the last part of the decade represented the start of Denver’s resurgence as well. The development of Denver International Airport, the creation of the Lower Downtown Historic District, the passage of a $250 million bond issue in 1988 for a host of civic improvements, the pursuit of a major league baseball team, and the visionary leadership of Mayor Federico Peña energized Denver to “Imagine a Great City” that led to the remarkable revitalization we are still enjoying today. 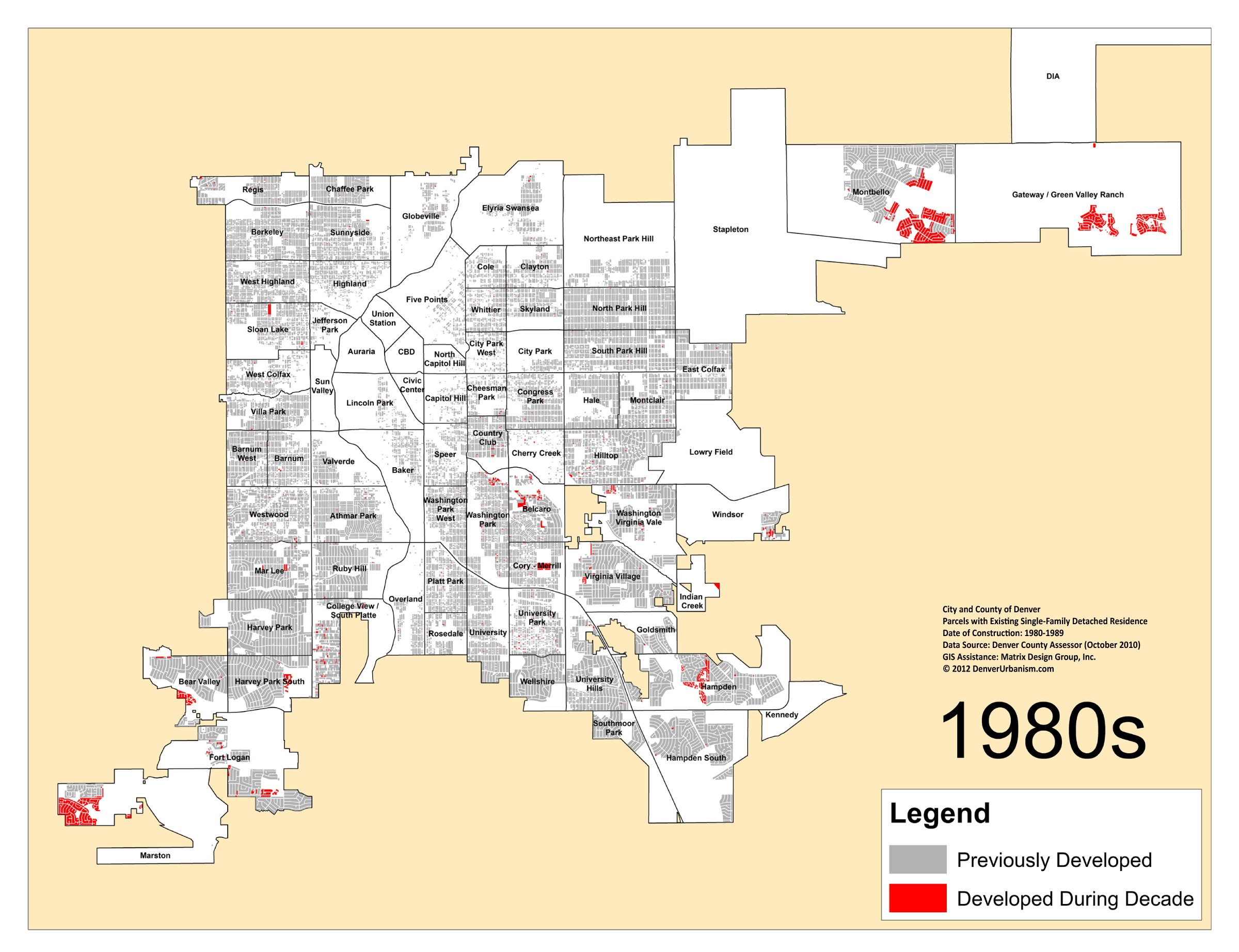 Clearly, the new single-family homes developed in Denver during the 1980s were found on the city’s edges, primarily in the Marston, Hampden, Montbello, and Green Valley Ranch neighborhoods, with some smaller infill developments in and around the Belcaro area and a few other neighborhoods.

Here are the 1980s parcels colored in red over a current Google Earth aerial: 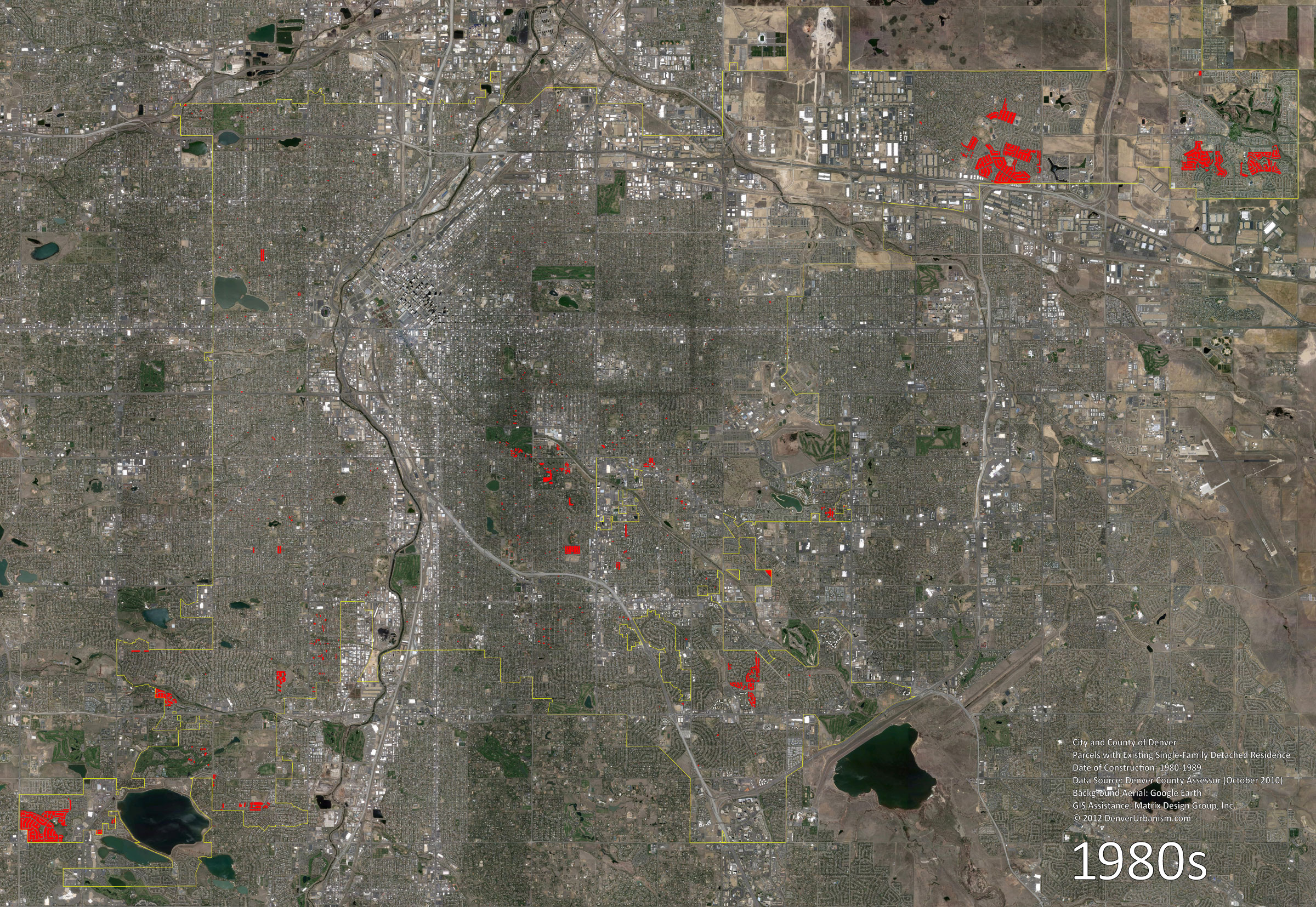 The Eclectic movements alternating emphasis on period styles based on earlier architectural tradition and Modern designs that eschew historic precedent has once again shifted. Historically based styles again become the dominant theme in American home design.

1. Ranch. Once again, the Ranch style features asymmetrical single-story homes with very low-pitched roofs and broad, sometimes rambling facades. The eaves may be either boxed or open with the rafters exposed and have a moderate or wide overhang. Both brick and wooden facades are common, sometimes in combination. Modest traditional detailing, usually loosely based on Spanish or English Colonial precedents is common and frequently entails decorative shutters and porch-roof supports. Ribbon windows are common as are large picture windows in living areas. Here are some examples from the decade of the Ranch and its variants. Top left (Green Valley Ranch), top right (Marston). Bottom left (Green Valley Ranch), bottom right (Fort Logan): 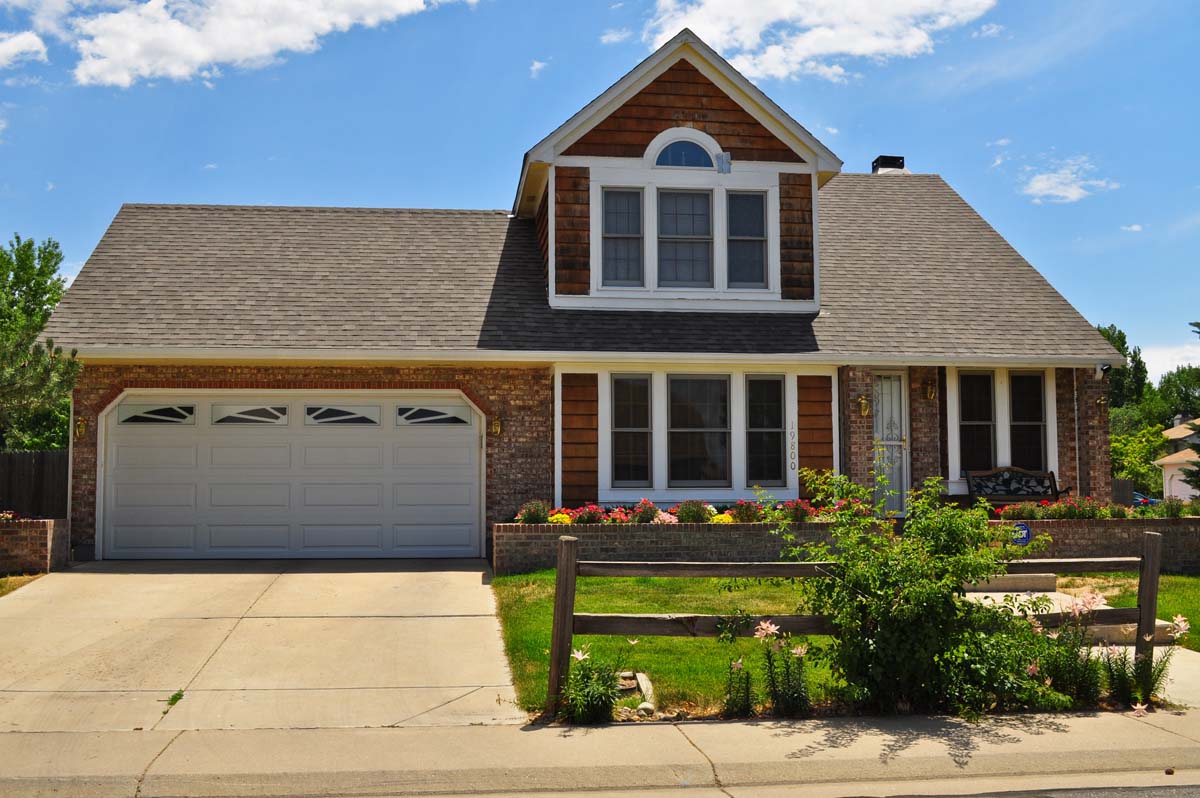 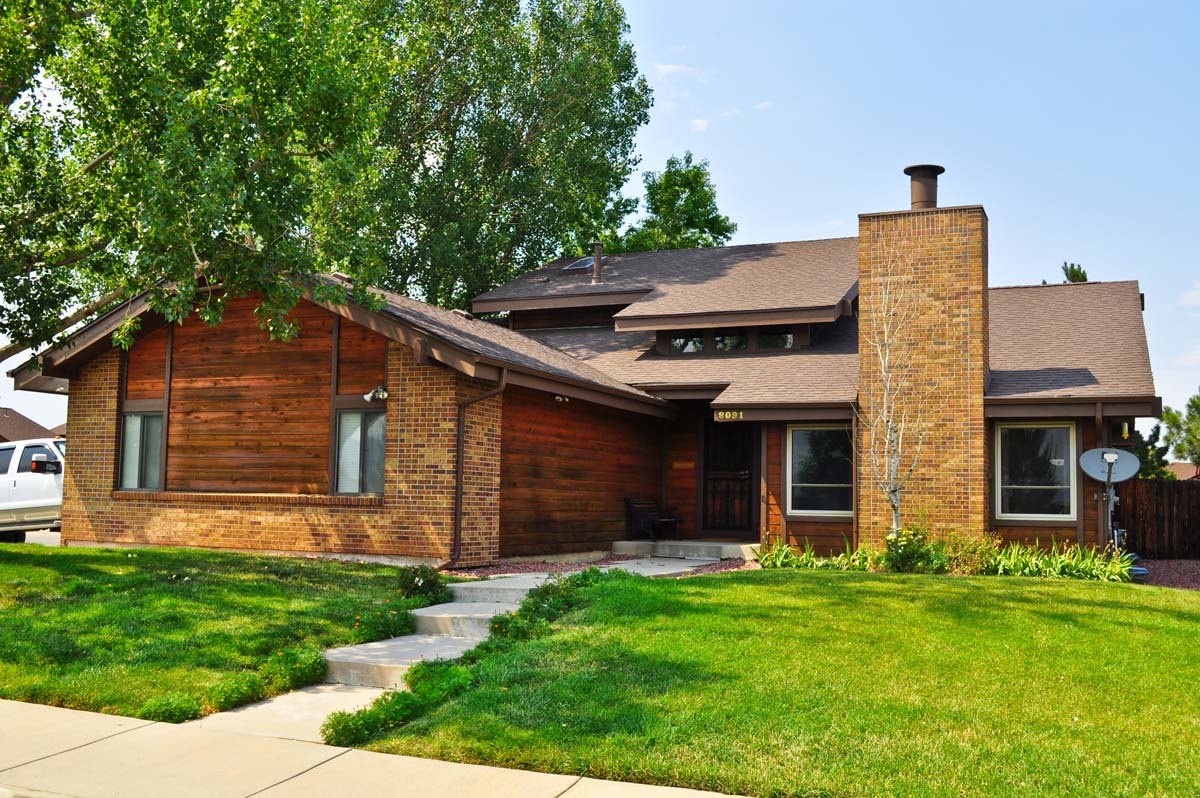 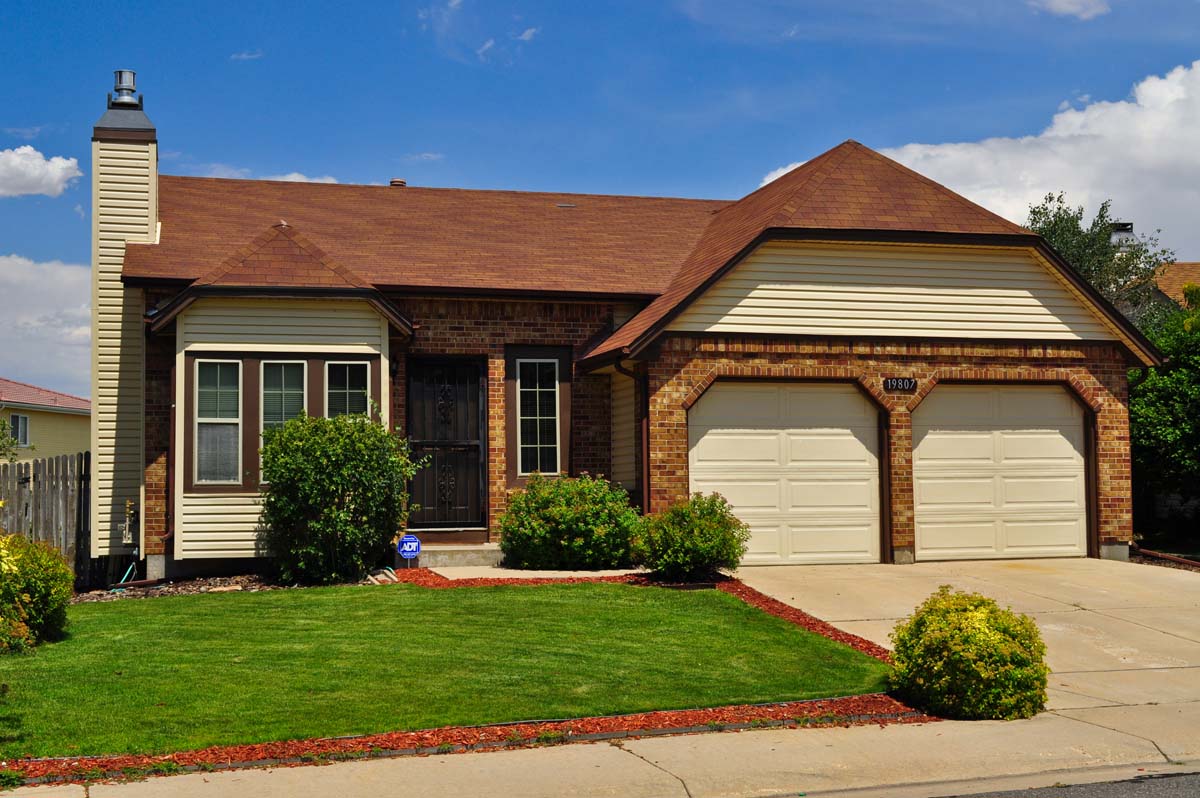 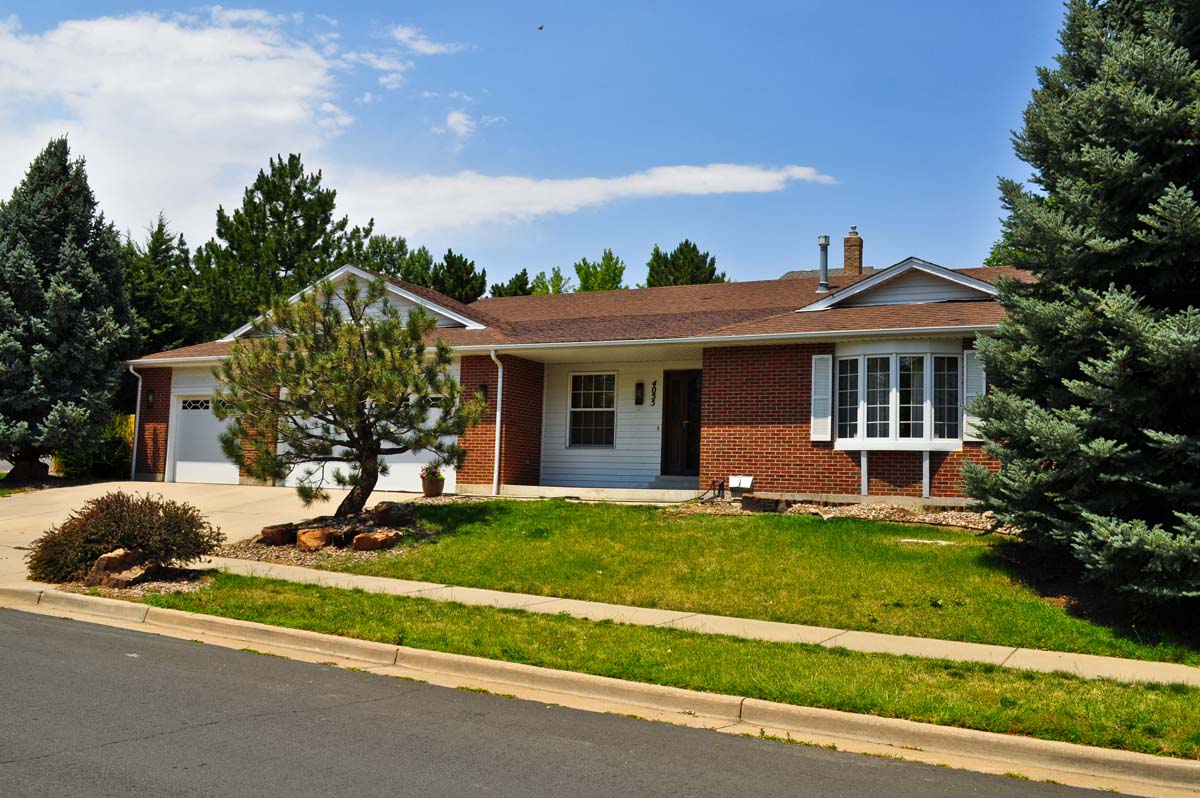 2. Shed. The style features a multi-directional shed roof that in shape appears to be one or more shed roof elements (sometimes with additional gabled roof forms) joined together creating an effect of colliding geometric shapes. Wall cladding is typically wood-shingle or board siding. Roof-wall junctions are smooth and simple and have little or no overhang. Entrances are commonly recessed and obscured. Windows are generally small and asymmetrical. The overall effect is of prominent diagonals, contrasting shapes, and multiple massing. Left (Hilltop), right (Hampden): 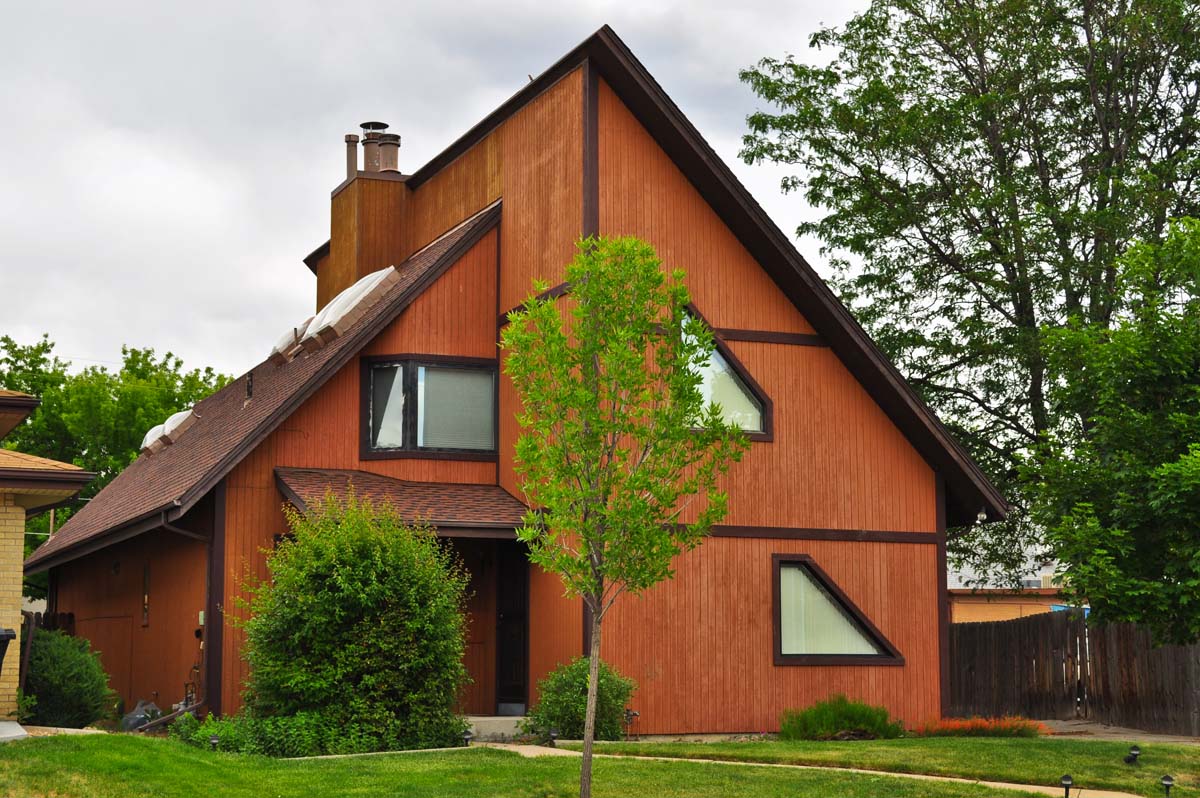 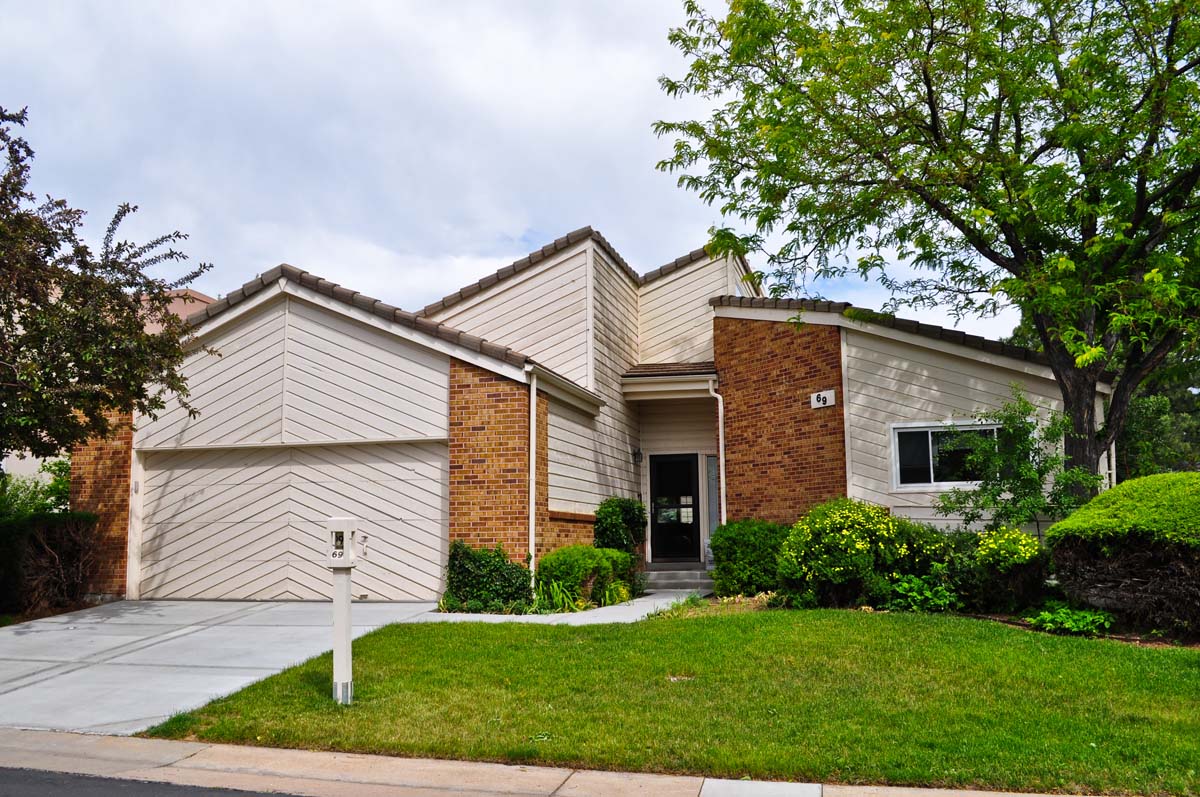 3. Late Modernism. As described previously, Late Modernism refined and reformulated earlier Modern concepts and revived disfavored Modernist features such as radial corners, belt courses, and glass block. Defining characteristics include a horizontal orientation, use of industrial materials such as concrete, ribbon windows and belt courses, hooded or deep set windows, large areas without windows, no ornament, decorative use of functional features, walls are eaveless or with boxed or cantilevered eaves, and flat or shed roofs (Washington-Virginia Vale): 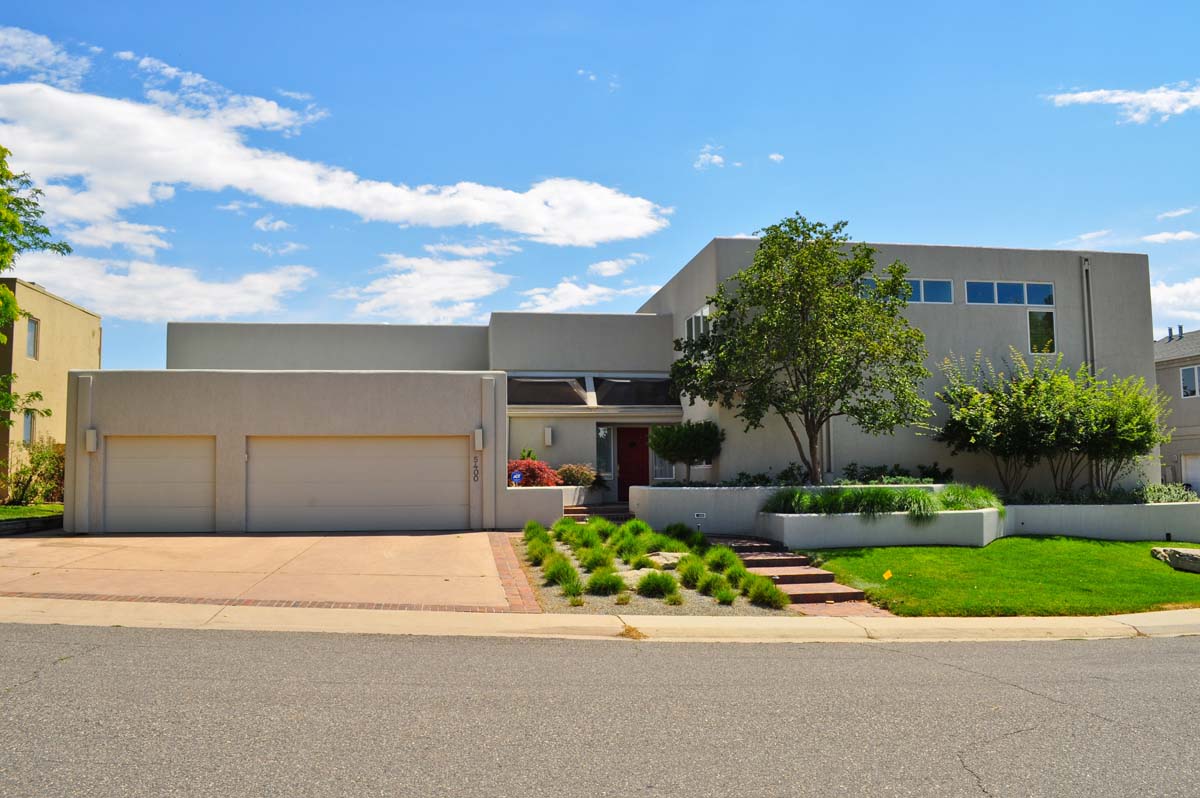 4. Neoeclectic/Neo-Tudor. The style, similar to its Tudor predecessors, characteristically features dominant front-facing gables with steeply pitched roofs. Decorative half-timbering detailing is nearly universal and windows are grouped and sometimes include diamond-shaped panes. As with other Neoeclectic styles, little attention is paid to precisely copying its Tudor antecedents (Fort Logan): 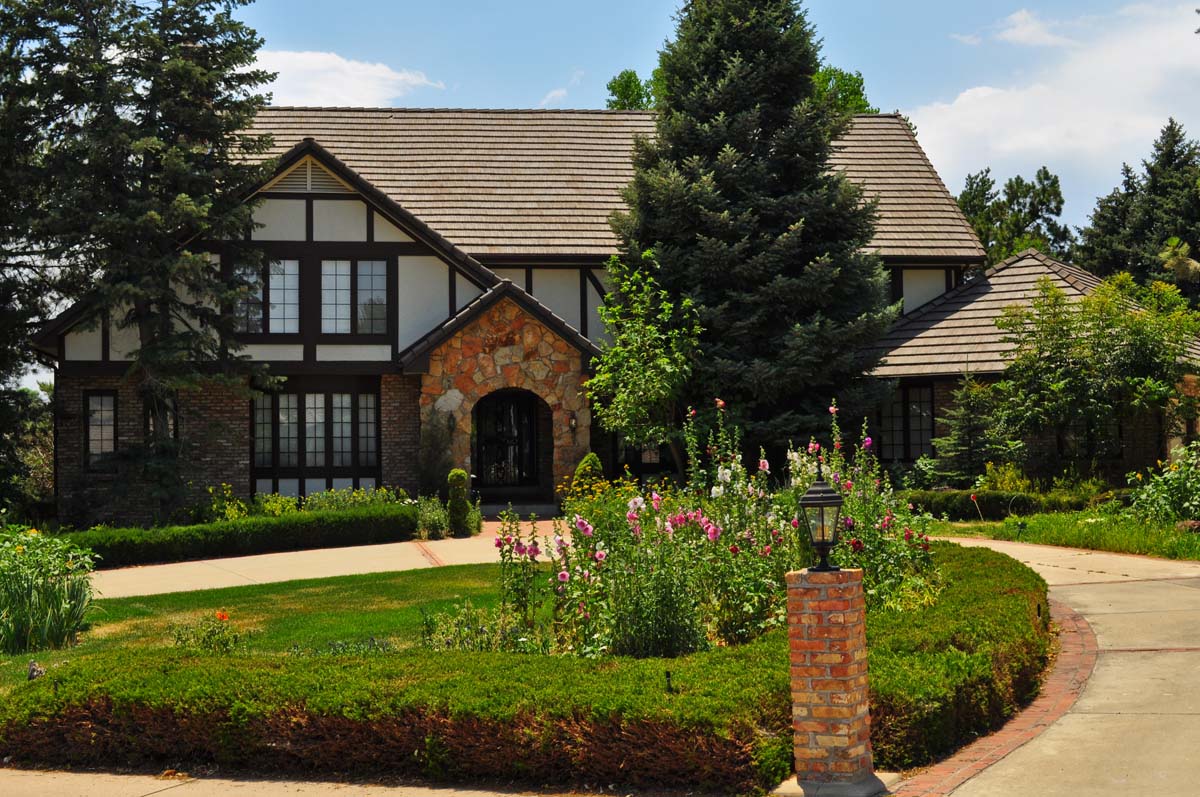 5. Neoeclectic/Mansard. As previously defined, the style first appeared in the ‘60s and was named for its characteristic roof and was frequently used for commercial buildings and apartment houses as well. Builders realized that an inexpensive way to gain a dramatic decorative effect was to slightly slope the upper wall surfaces and cover them with decorative shingles and detailing. Left (Cherry Creek), right (Fort Logan): 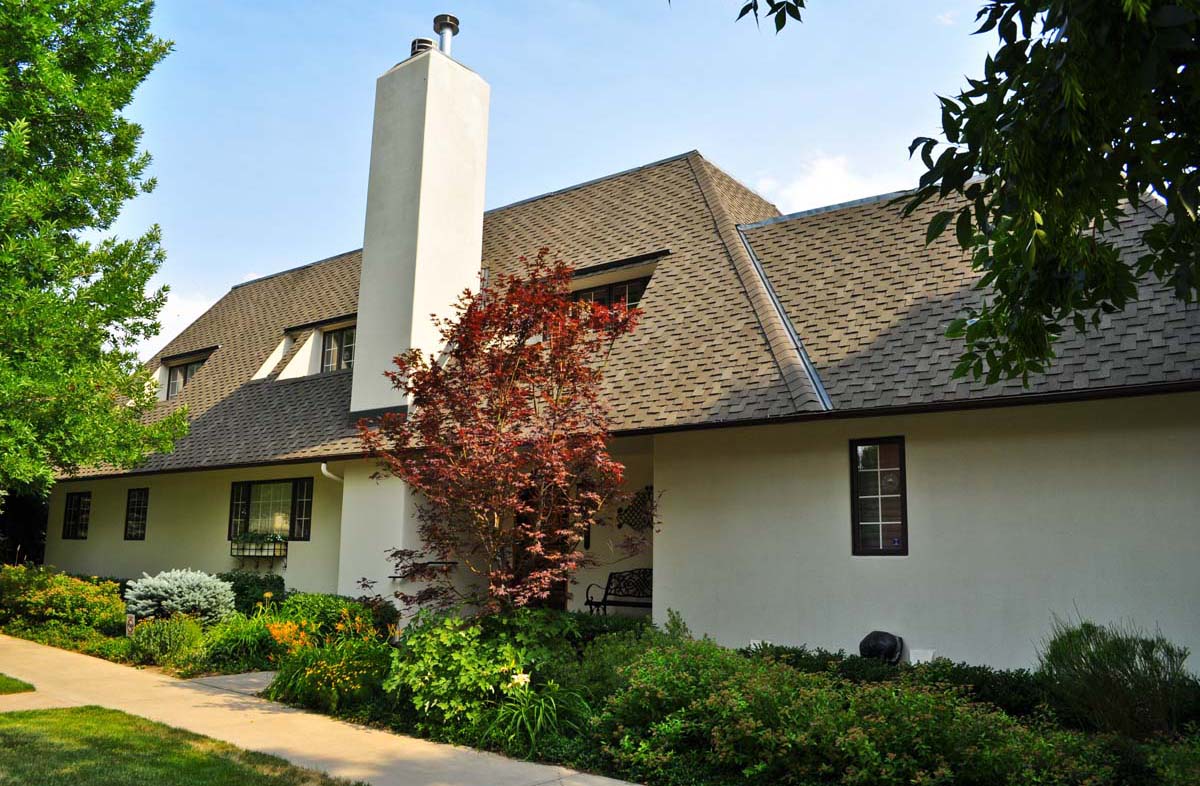 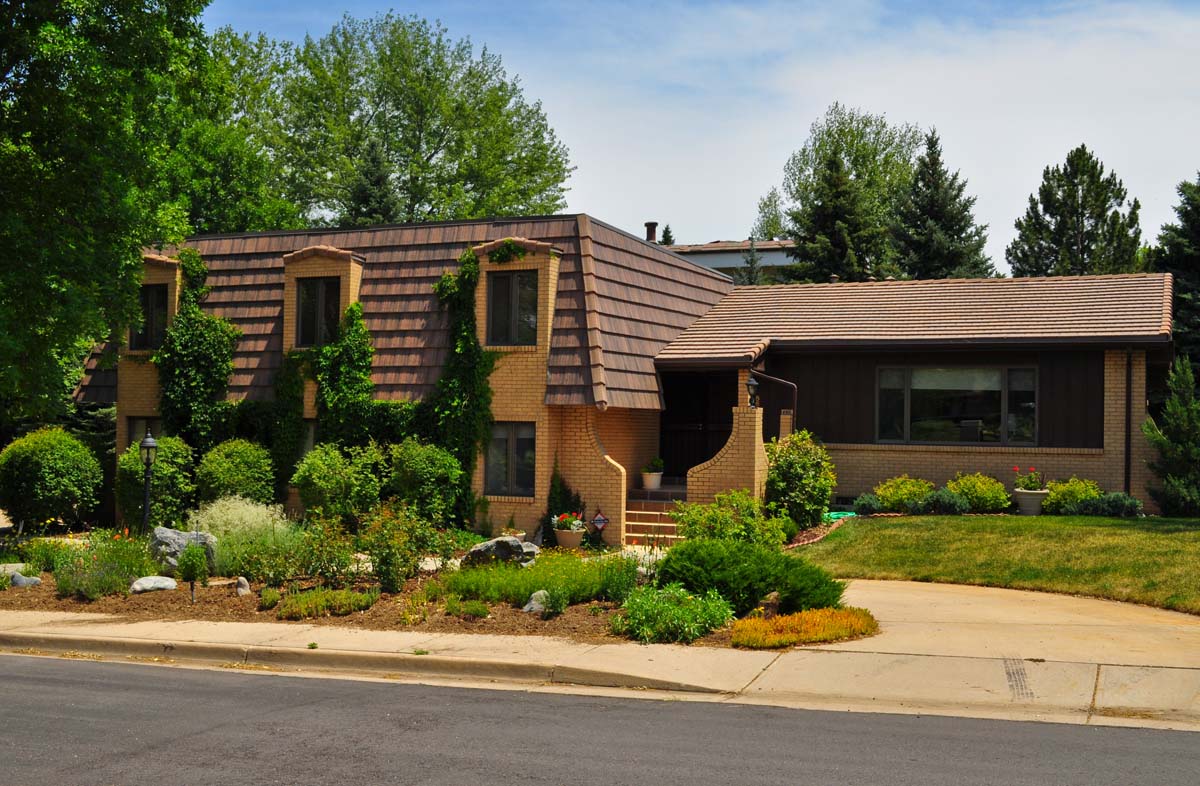 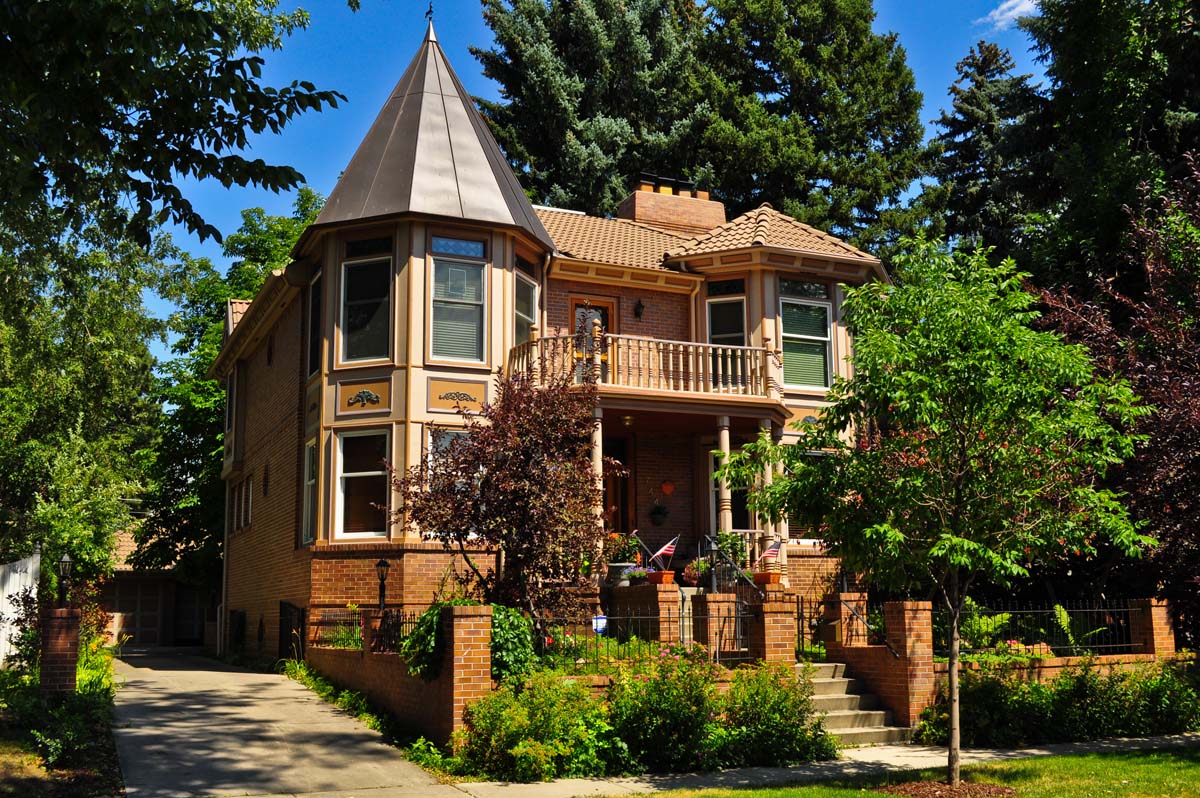 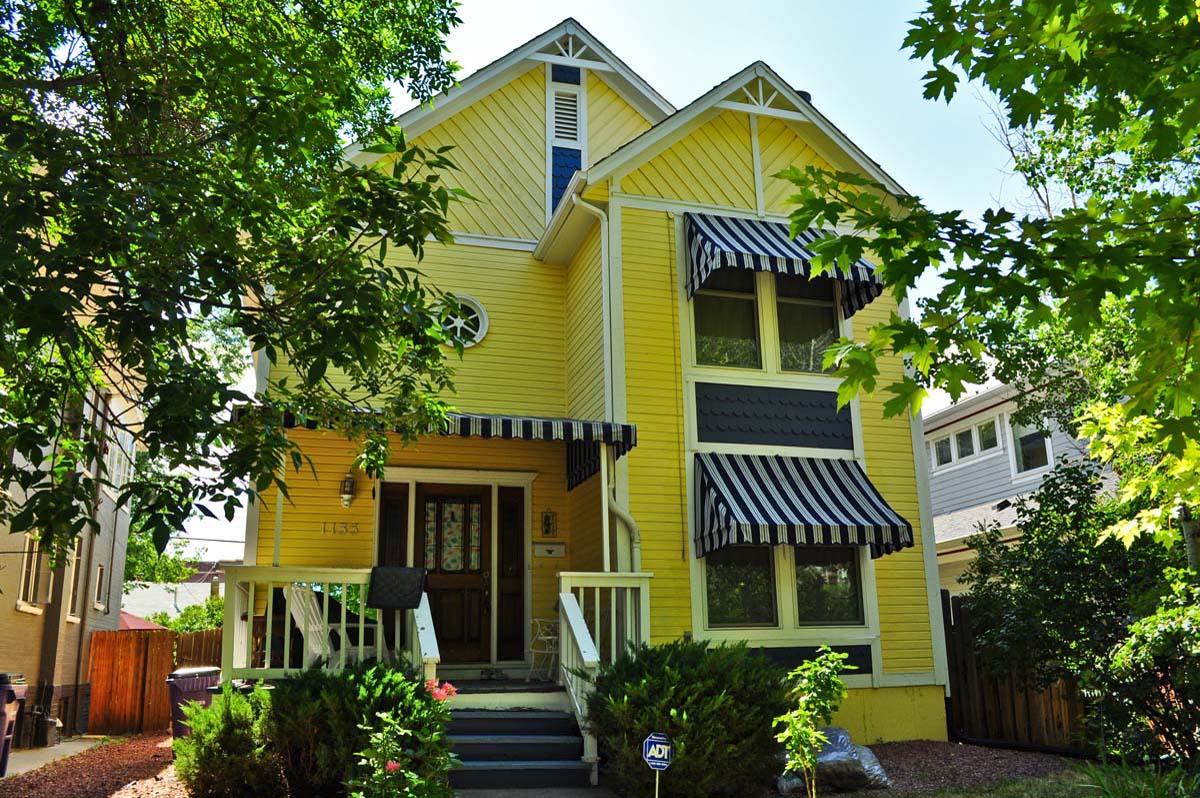 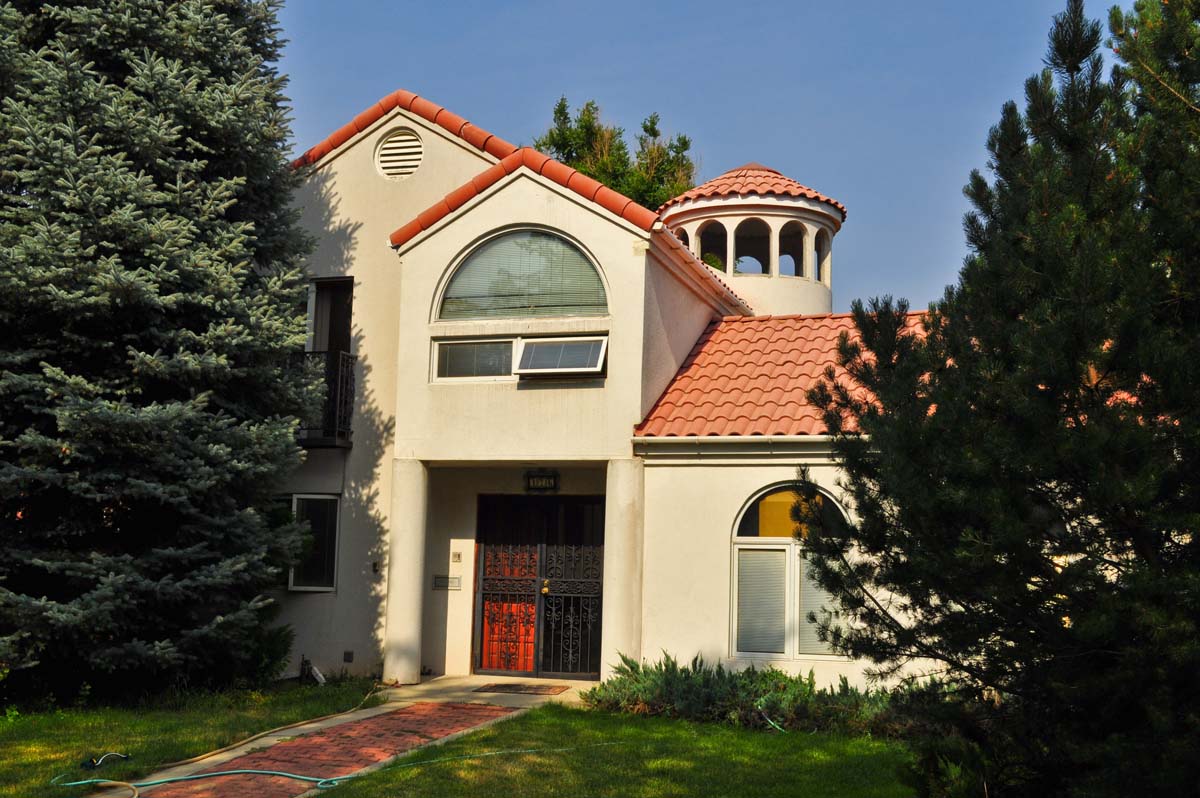 8. Various. While the majority of new construction was built on the fringes of the city, a modest amount of infill was occurring in established neighborhoods during the decade. The following examples are from the Sloan Lake neighborhood and represent builders attempts to mimic the historic building stock prevalent in the area. 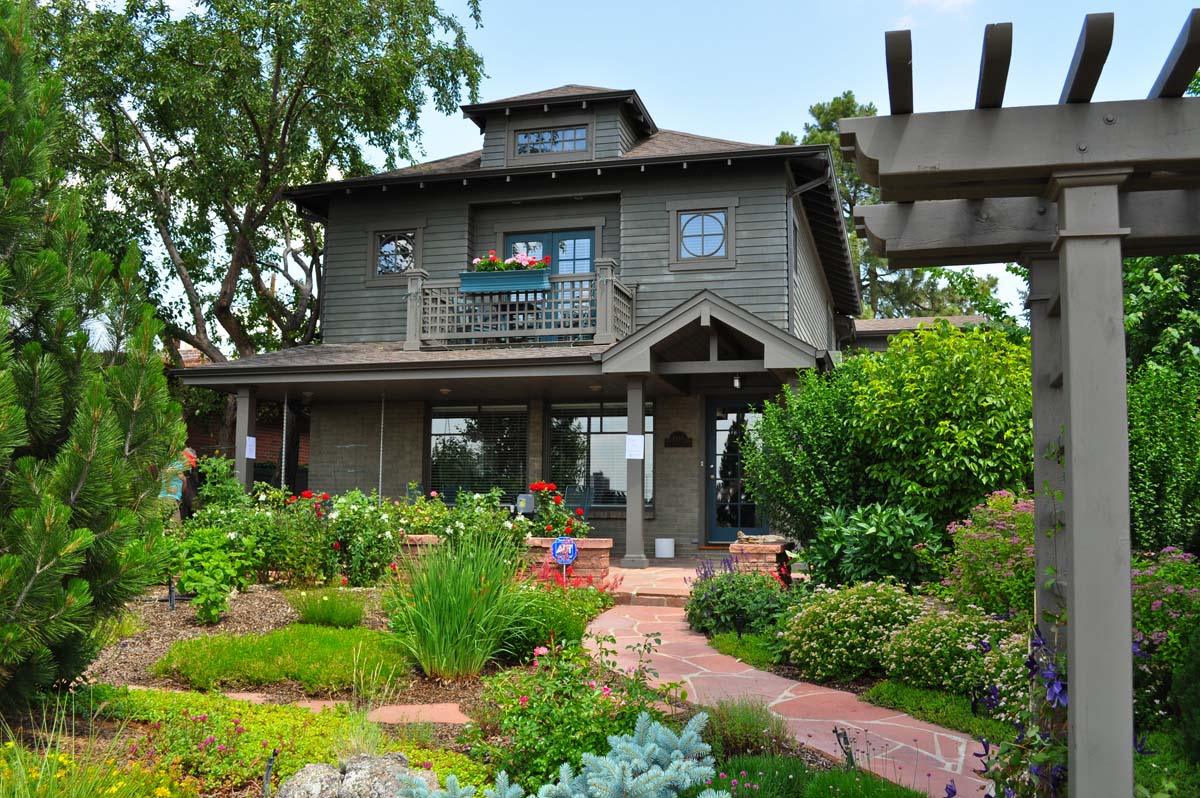 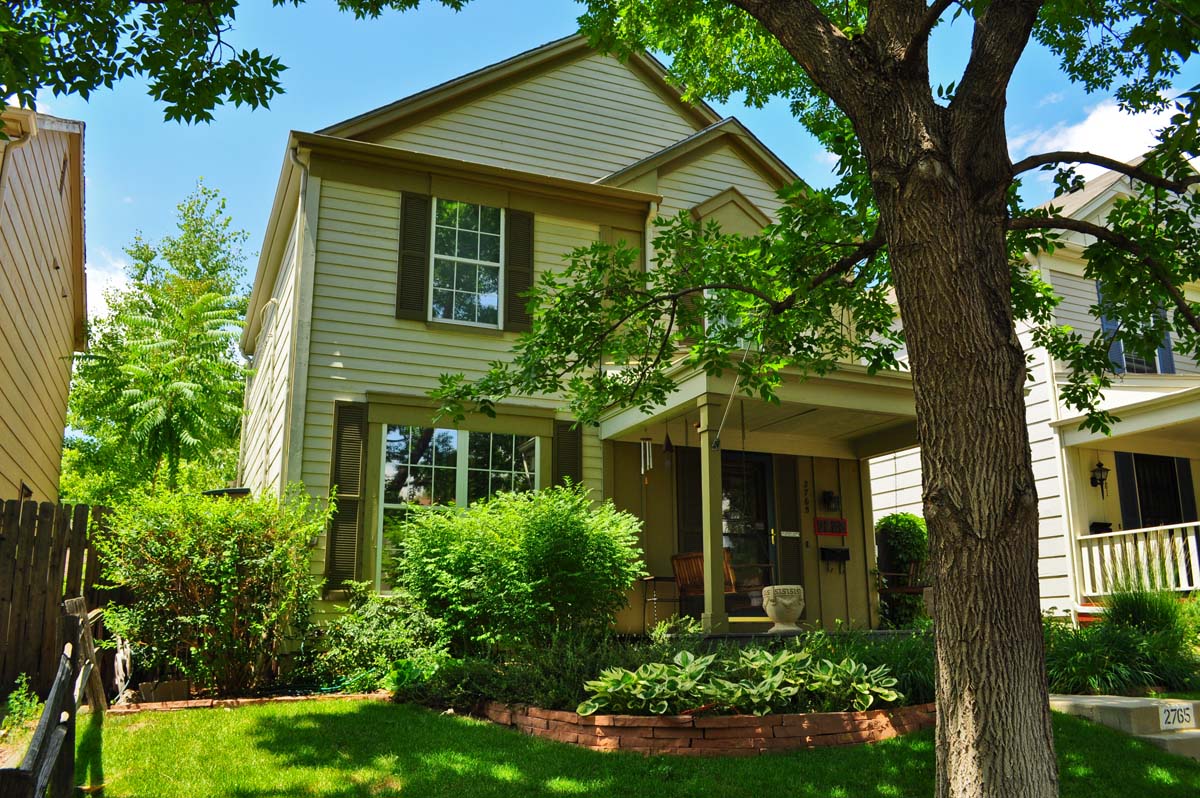 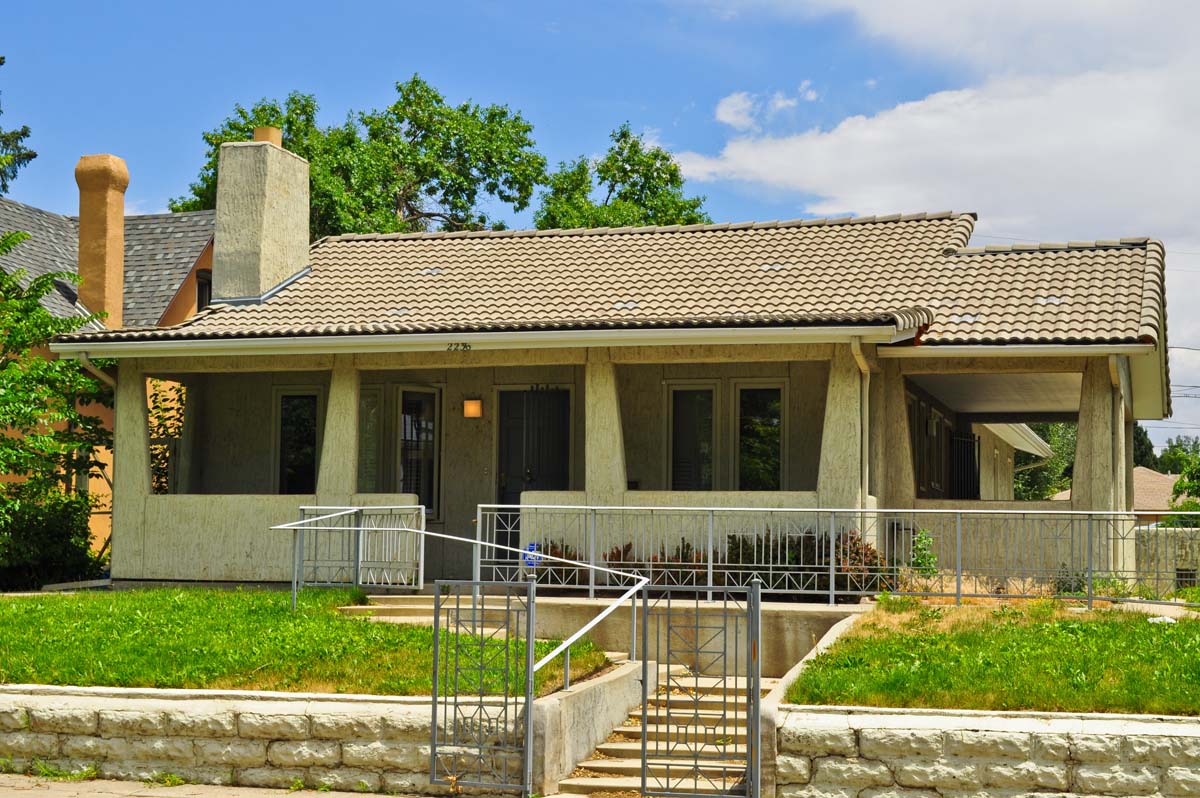 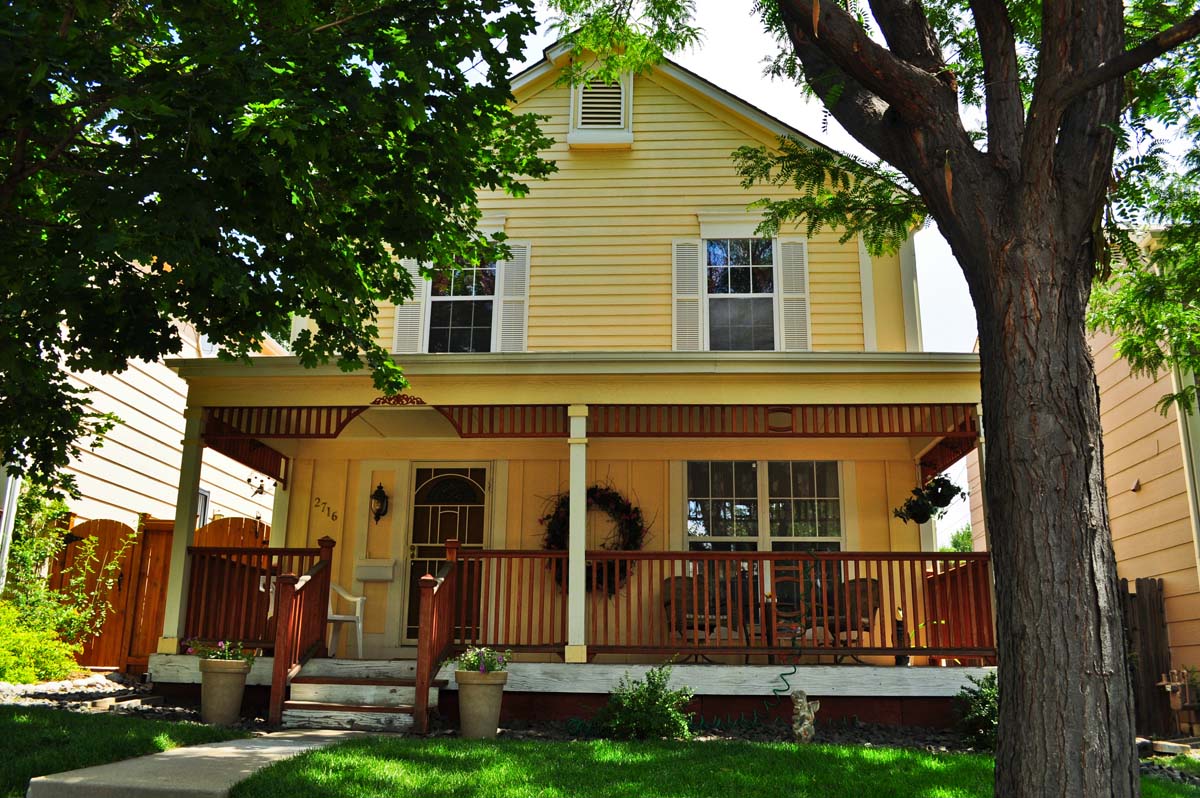 Final note: Mark has added an additional section looking at some of the Modern/Contemporary styles from the 1950s. Click here to go to the 1950s page and scroll down to the bottom of the post to view the new photos and commentary.