In this third post in our special series, we will take a look at the geography and architecture of Denver’s single-family detached homes built during the 1890s. For previous installments in the series, please use these links:

The 1890s was the city’s fourth full decade of existence. From that decade, about 5,900 single-family homes are still in existence today, comprising about 70% of Denver’s surviving Nineteenth century housing stock. As Mark notes below, the city experienced in this decade the worst economic crisis in its history: the Silver Crash of 1893. Nevertheless, Denver still experienced solid net growth in the 1890s and affirmed its position as the preeminent city of the Mountain West. Denver’s population grew from 106,713 in 1890 to 133,859 in 1900, a growth rate of 25%. 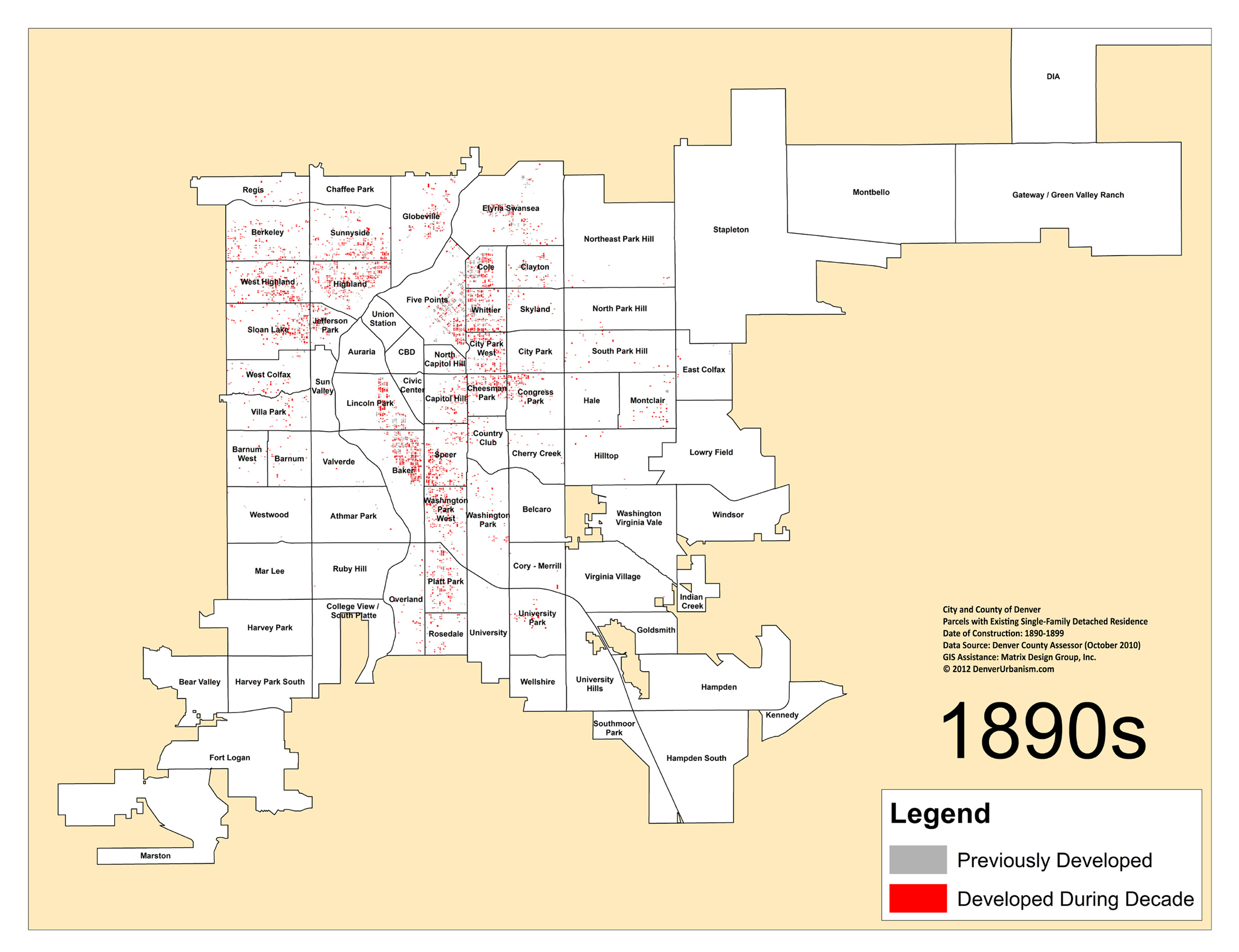 In the 1890s, Denver continued to grow primarily in three directions relative to Downtown: northwest, east, and south. As we saw in the 1880s, a lot of growth occurred in Northwest Denver, but the growth was widely dispersed across today’s Highland, West Highland, Berkeley, Sunnyside, Jefferson Park, and Sloan Lake neighborhoods. Much of this area in Northwest Denver was, at the time, part of a separate municipality, the Town of Highlands. For more on that fascinating aspect of Denver’s history, click here.

Growth continued to the east from Curtis Park/Five Points into the Cole, Whittier, Clayton, and City Park West districts, while Elyria-Swansea to the north and Capitol Hill and Cheesman Park to the southeast remained popular places with steady development. Farther east, Congress Park started taking off, while scattered development continued in Montclair and the first few homes started appearing in Park Hill. New homes also started being built in the Country Club and the Cherry Creek districts during the 1890s.

Here are the 1890s parcels colored in red over a current Google Earth aerial: 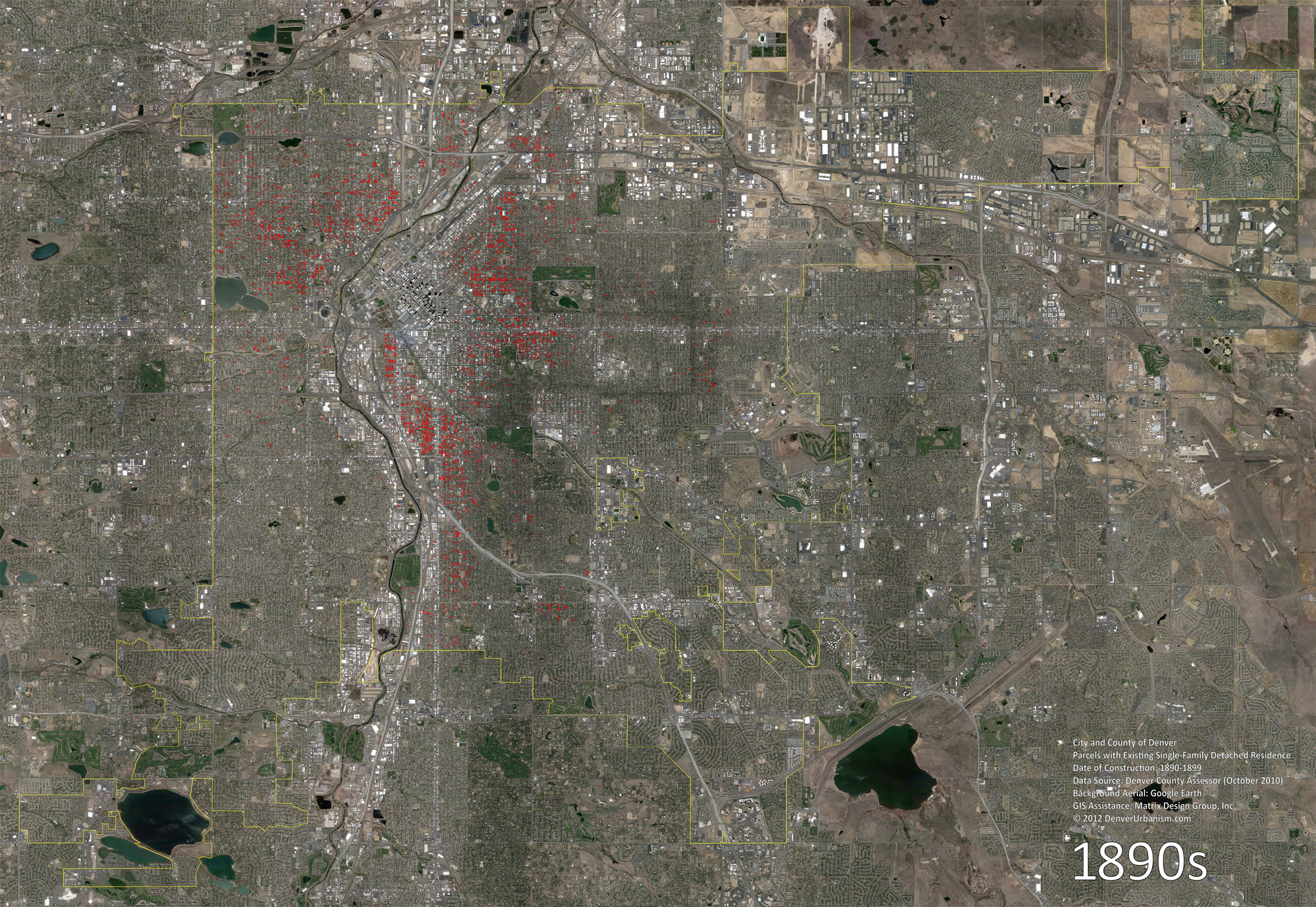 Next, Mark’s architectural photos and descriptions:

The decade of the 1890s was defined by the end of an era. The panic of 1893 and subsequent depression ended the Victorian-era building boom. While 2,338 building permits were issued by Denver in 1890, only 124 were granted in 1894. The Victorian styles continued to fade in popularity and, by 1900, Neoclassical and Colonial Revival became the current fashion. Denverites followed the national trend moving away from the extravagance of the Gilded Age designs into more economical, standardized ones.

1. Eclectic. A vernacular poly-chromed townhouse sub-type of the Gothic style. A flat roof with a false gable, the sunburst patterns displayed in the gables, the elaborate cornice, and the upper brackets which form extensions of the vertical strips of masonry are all features of the sub-type. 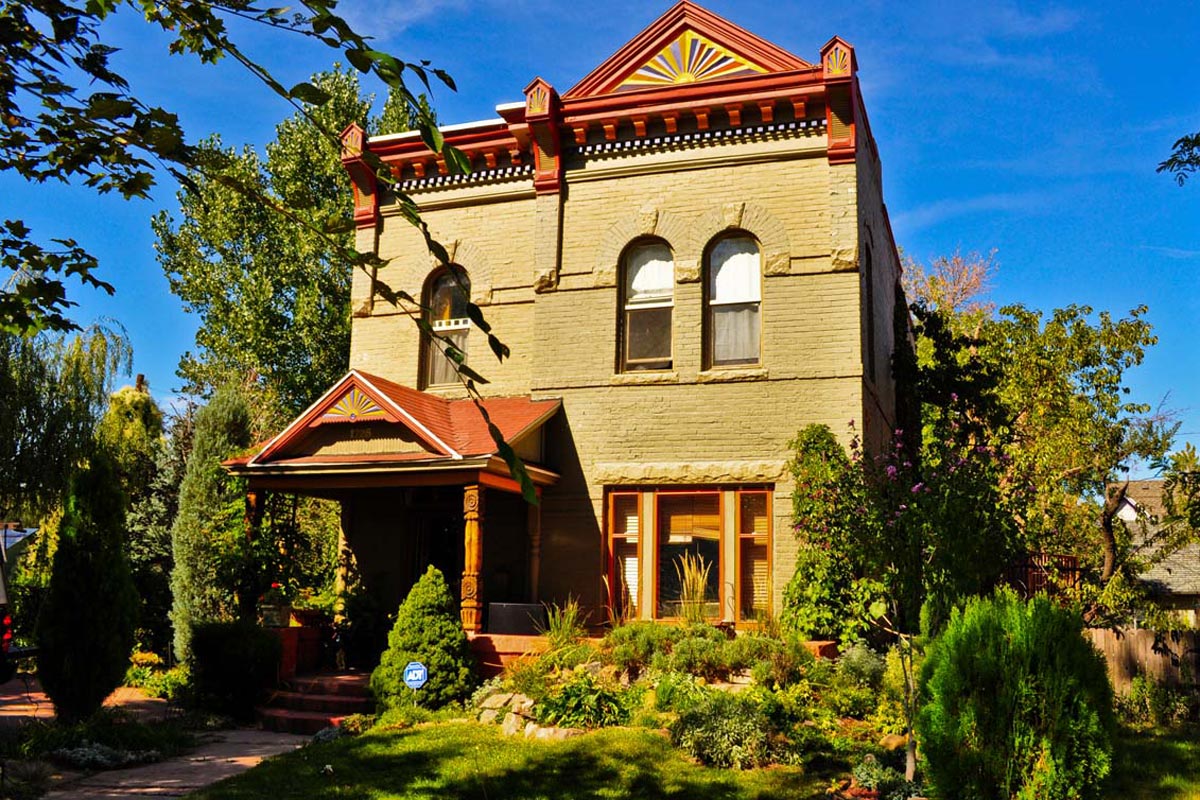 2. Queen Anne. Built a decade past the Gothic Revival period, this house features many elements from that period’s style. The decorative verge-boards topped by finials, window crowns, and the undecorated masonry that stretches into the gables are all characteristics of the Gothic Revival style. 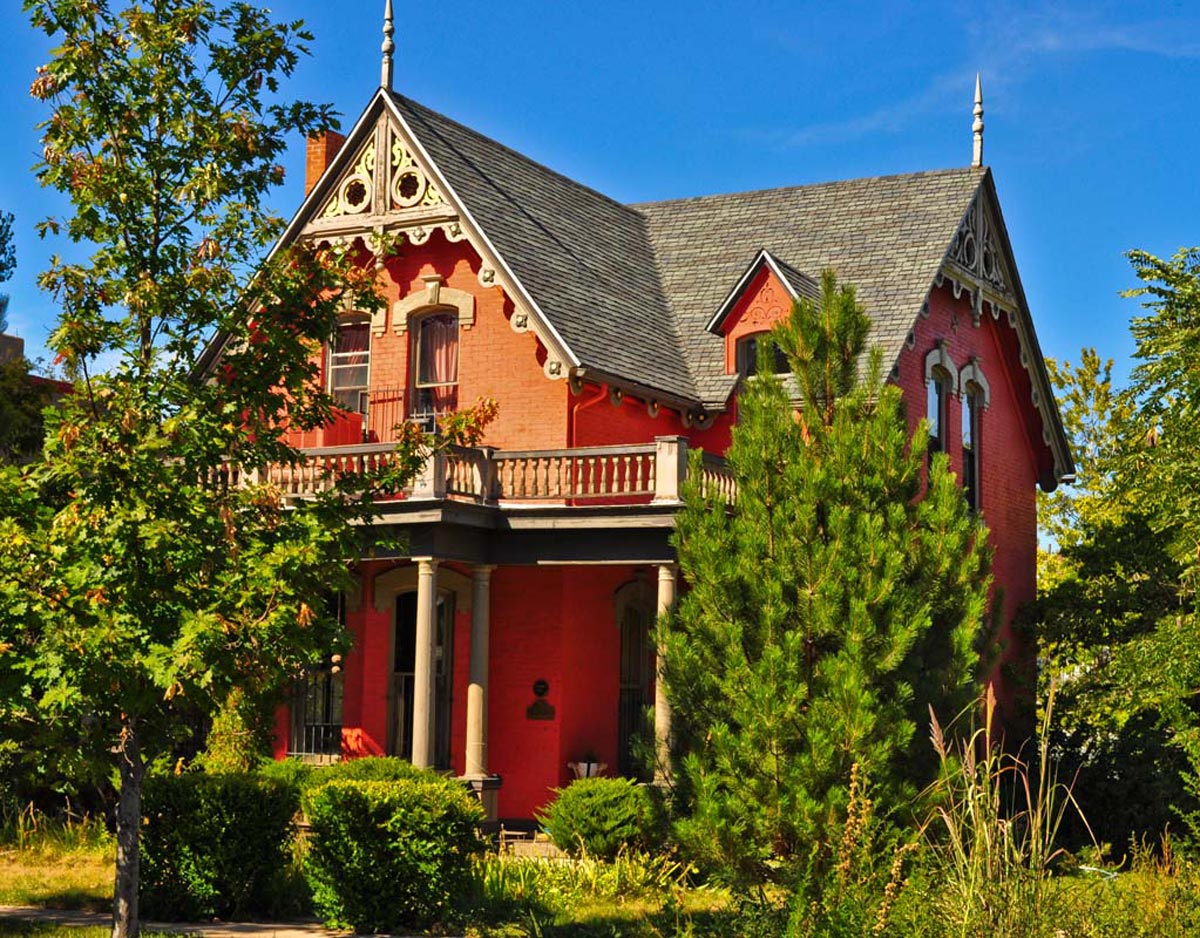 3. Queen Anne. Side gabled with a two-story side bay, the front-facing two-story curved bay forms the base of a conical shaped corner tower. Pediments and the turned porch supports add decorative detailing. 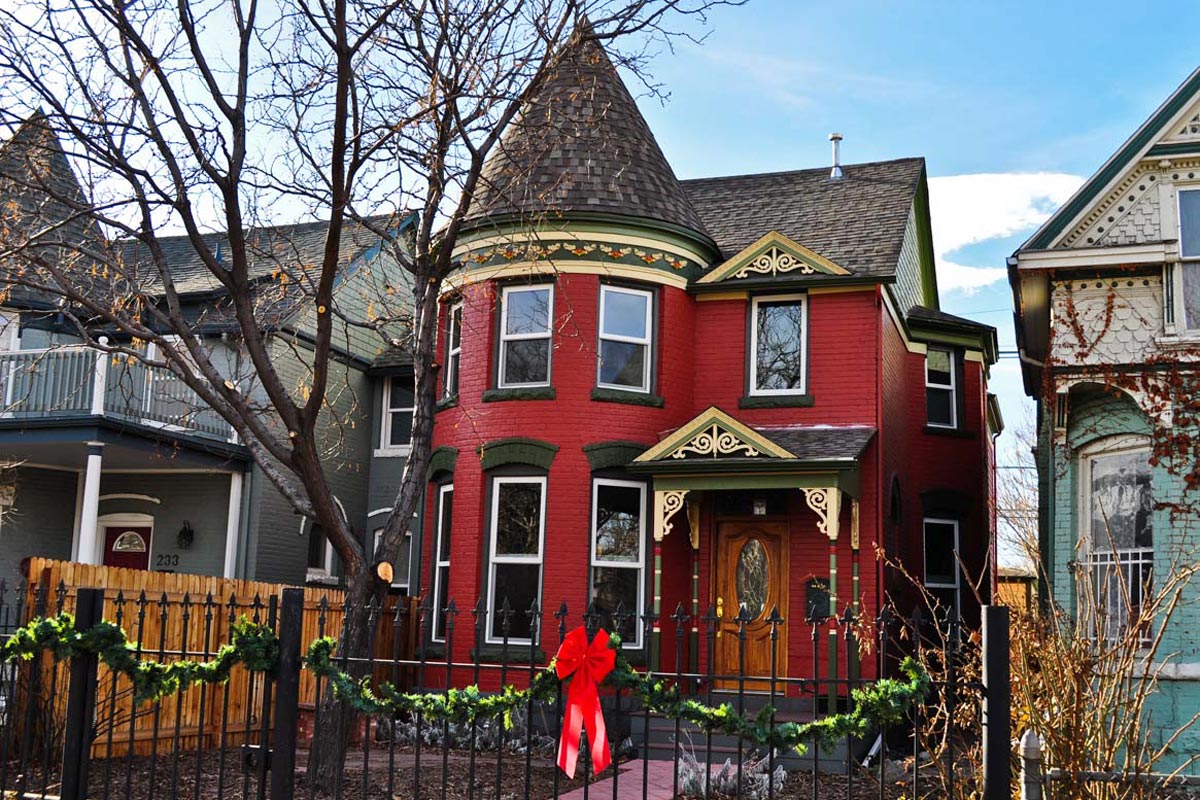 4. Richardsonian Romanesque. Built of rough-faced stonework with a front-facing gable and a corner tower, the tower above the corner bay windows features decorative battlements or crenelations. Rounded (Romanesque) arches are a key feature of the style as well as the row of arched windows near the gable. The columns often feature cushion capitals and the arch springs from heavy piers, columns, or wall surfaces. 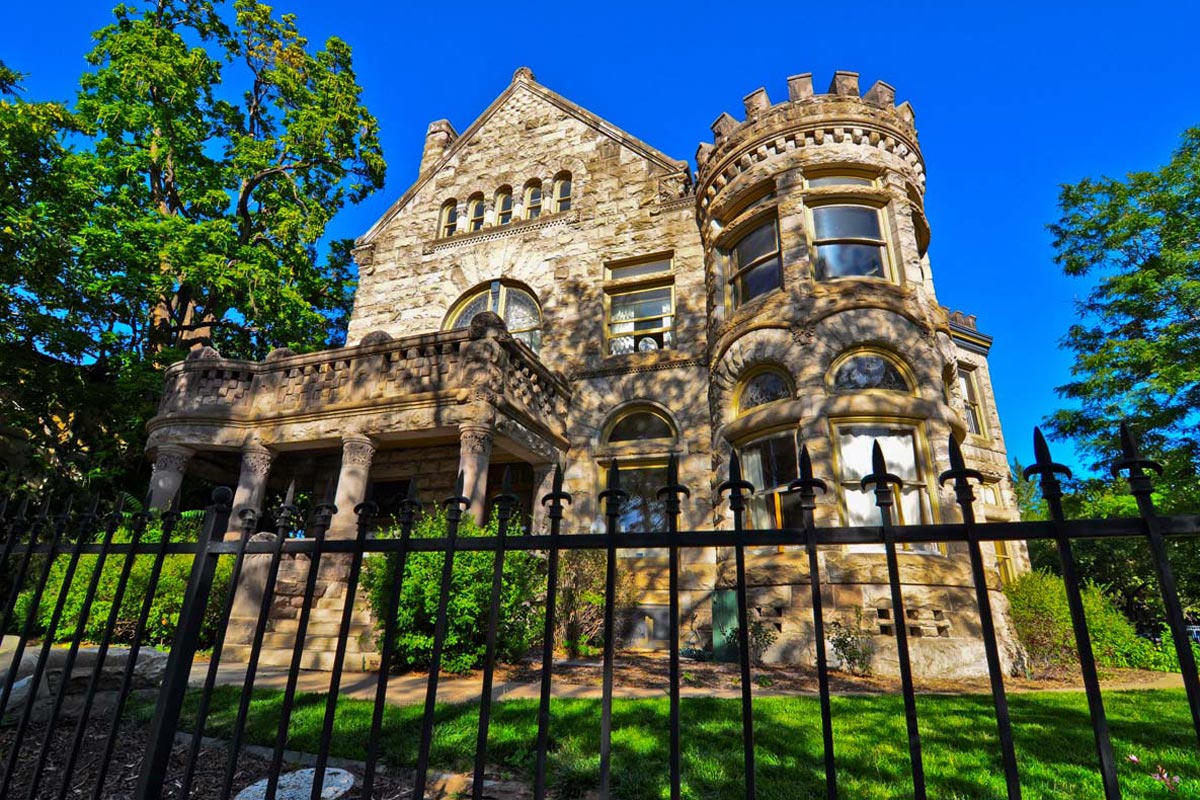 5. Dutch Colonial Revival. A defining element of the style is the gambrel roof which this house features as the steeply pitched side-gabled type. Front-facing dormer windows and a full-width front porch are also common elements of the style. 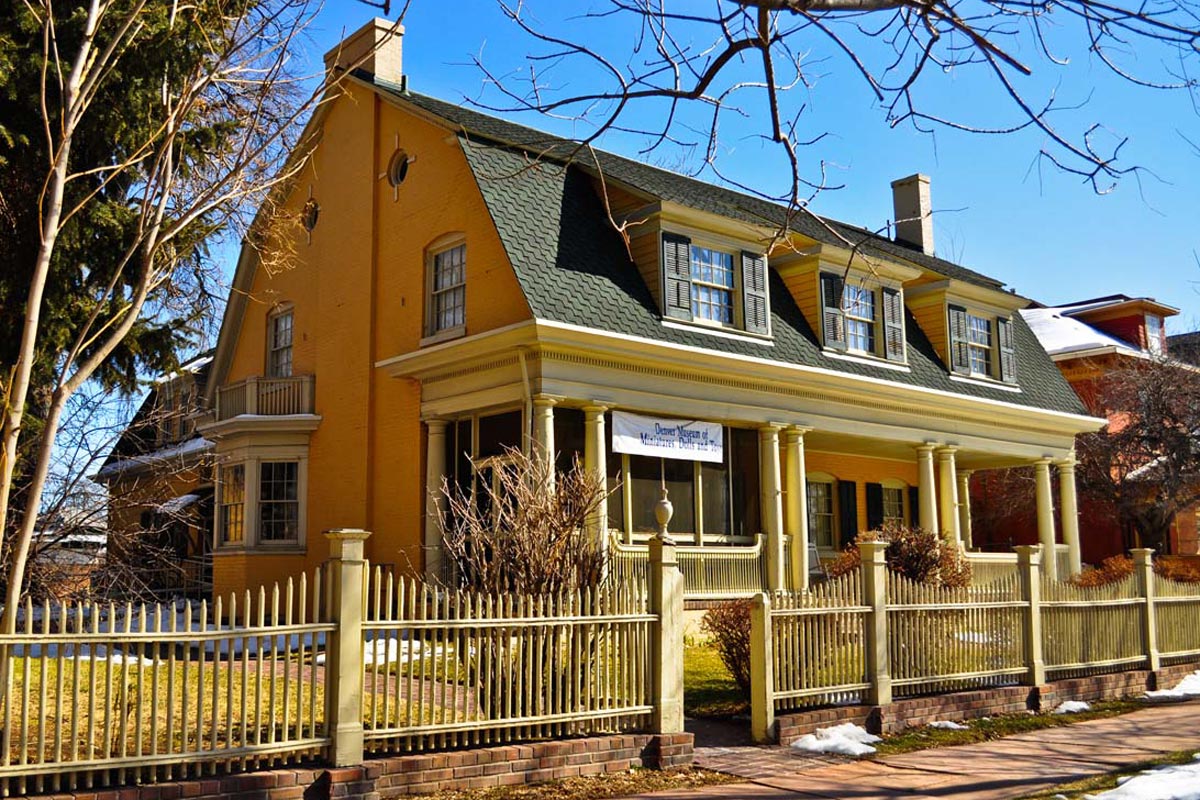 6. Dutch Colonial Revival. This home features the more common front-facing gambrel roof with a cross gable at the side; the side or rear gable will often be a gambrel as well. An oriel window and diamond shingles are interesting details. 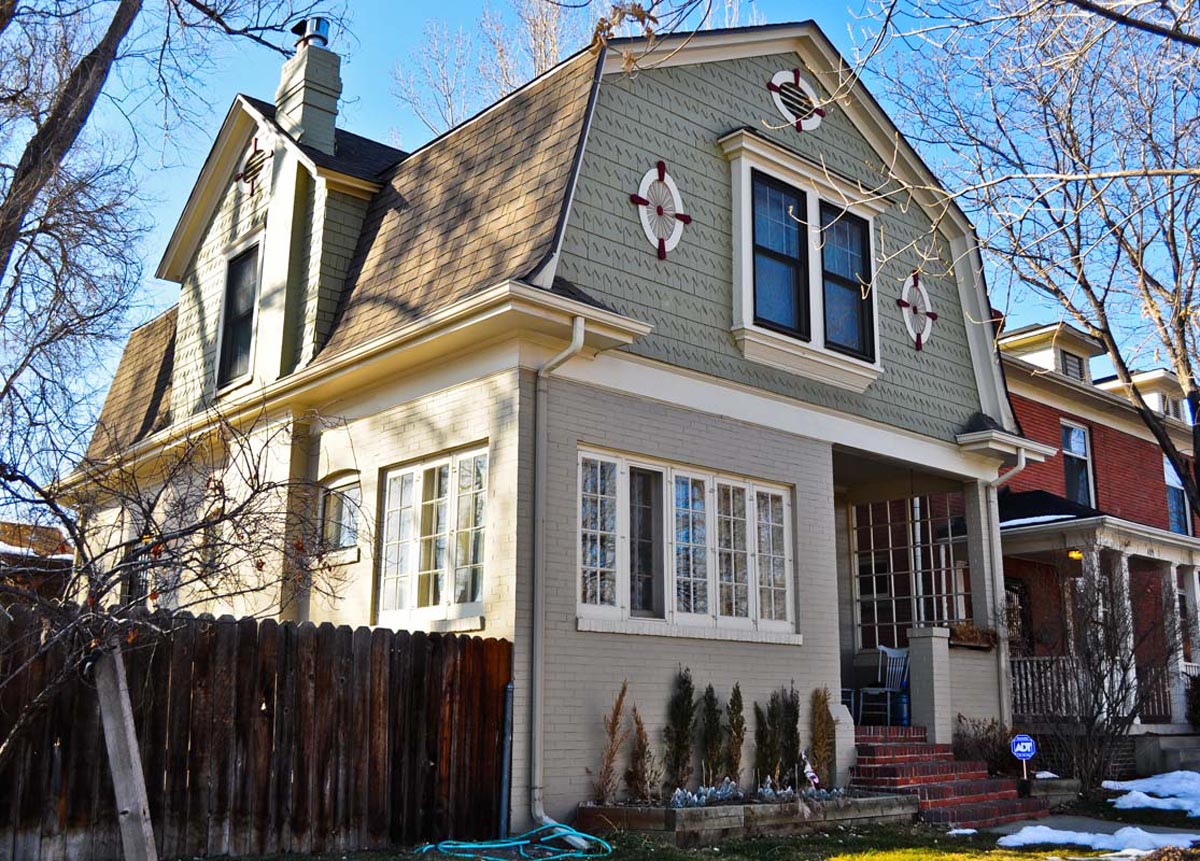 7. Foursquare (known locally as the Denver Square). Early squares typically had two stories with a rectangular plan, and a hipped roof featuring a central attic dormer. The roofs were high and steep with ornamentation limited to brackets or modillions under the eaves, such as this home. The early style had a single-story full-width porch with Tuscan columns and a simple wooden balustrade. The plain Foursquare later proved ideal for experimentation and became progressively more elaborate. 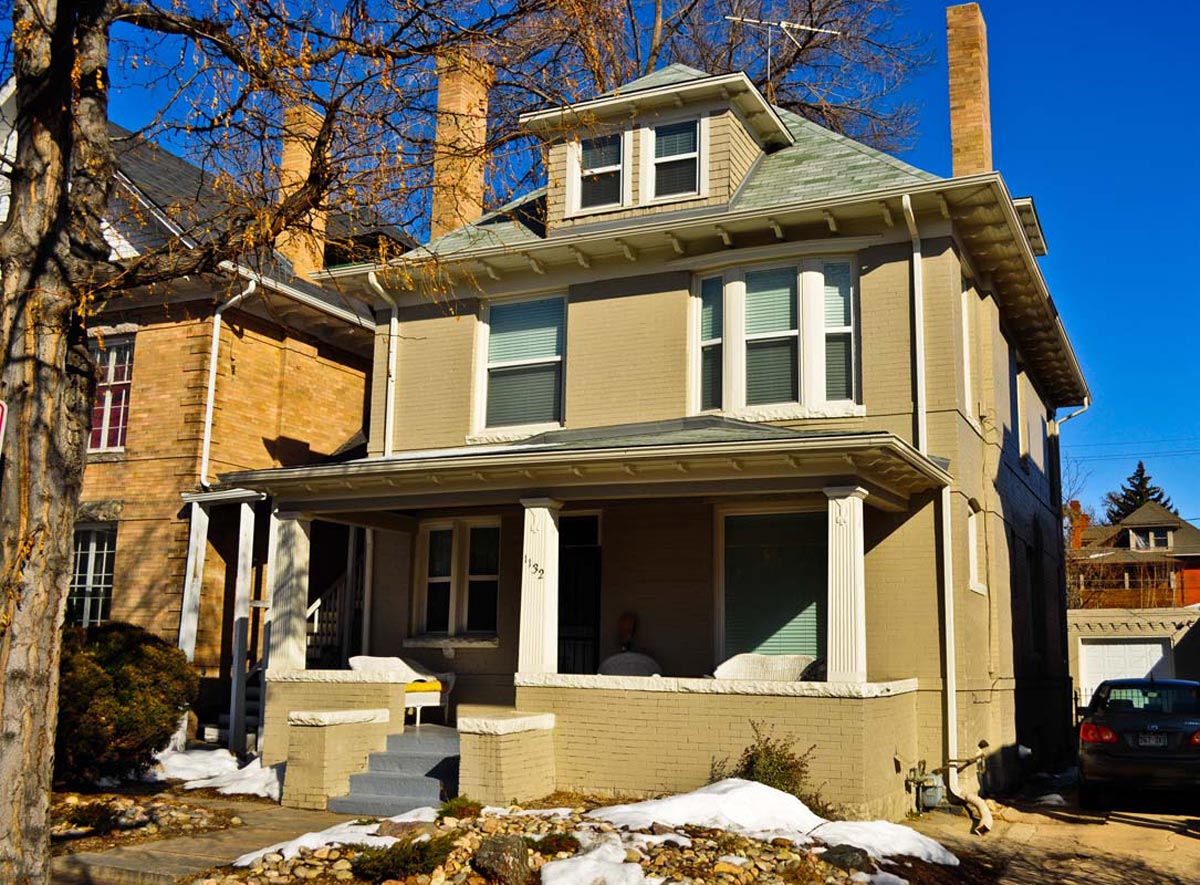 8. Classic Cottage. Known as a “Cottage Home” in real estate descriptions, these were a plainer, more affordable one-and-a-half story counterpart to the Denver Square and are similar in plan, roof type and ornamentation. Constructed of red brick with a rusticated stone foundation and window trim, the house has a small porch with clustered Tuscan columns and a gable roof accented with a bas-relief. The cottage home became the entry-level home of choice supplanting the one-story, front-gabled Queen Anne. 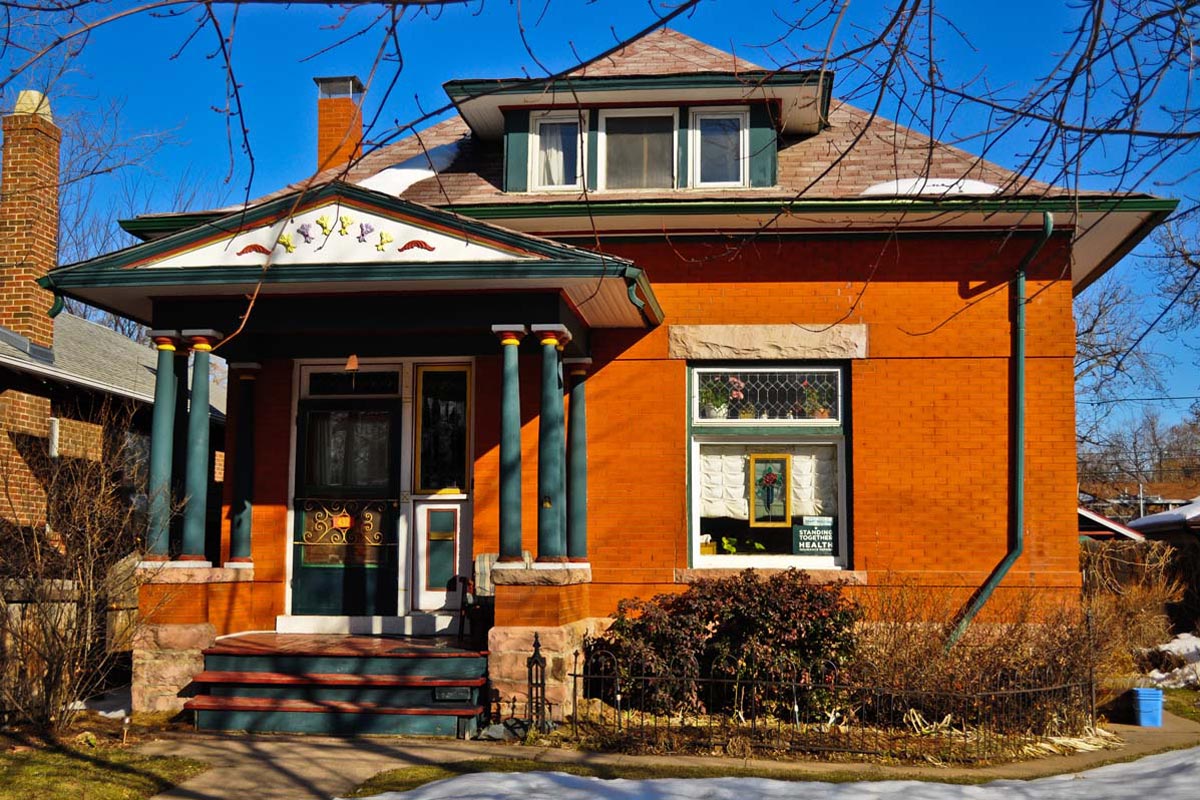