Continuing with our series on the geographic and architectural qualities of Denver’s single-family homes, today we have the 1910s. For previous installments in this series, please use the links below:

The 1910s was Denver’s sixth full decade as a city. From 1910 to 1919, approximately 6,100 single-family detached homes were built in Denver. This represented a drop of about two thousand homes from the previous decade. The “Teens” was a period of relatively slower economic growth for Denver (in addition to WWI). Nevertheless, Denver’s population still climbed from 213,381 in 1910 to 256,491 in 1920, a 20% increase. 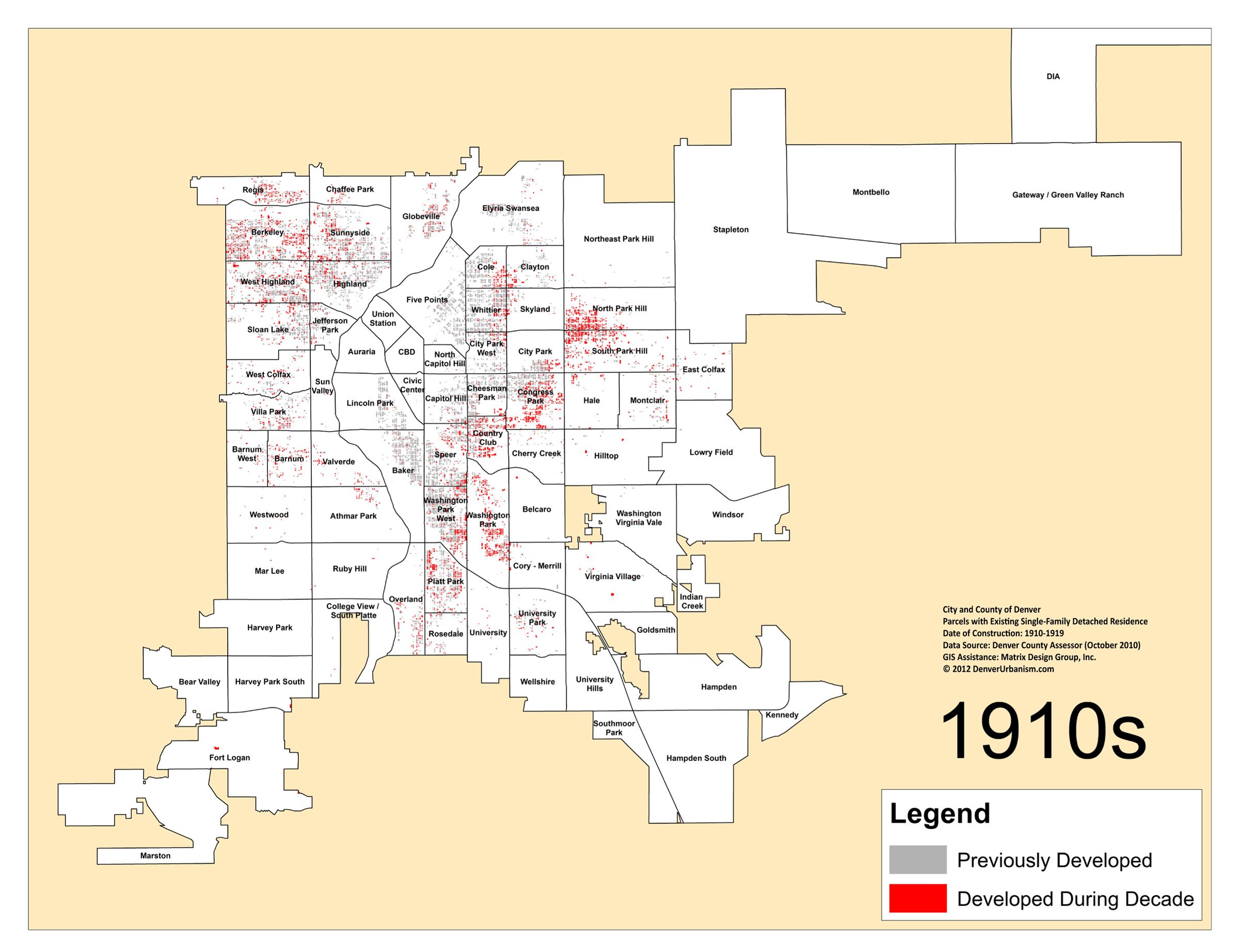 As in the previous decades, Northwest Denver continued to grow with a widespread distribution of new homes throughout several neighborhoods, including Highland, West Highland, Berkeley, Sunnyside, and Regis. A smattering of growth continued in West Denver in Villa Park, Barnum, and Valverde.

It was in East Denver and South Denver where more concentrated clusters of growth were occurring. Park Hill (both North and South) was a real hot spot. The growth in Park Hill is notable considering that closer-in areas like Cherry Creek, Skyland, and City Park were still relatively undeveloped at the time. Park Hill was the “exurbs” of the 1910s, but the growth was fueled by Denver’s expanding streetcar system; the Denver Tramway Company’s Route No. 40 ran along East 23rd Avenue right into the heart of the new Park Hill subdivision.

This is also the decade when the Washington Park neighborhood (east of the park) really took off. Thanks to the Denver Tramway Company’s Routes No. 5 and 9, Washington Park and West Washington Park residents had a streetcar line connecting them to downtown. Back then, the transit lines were often built first (usually subsidized by the developers), then the homes and commercial developments followed. In fact, almost all of Denver’s residential growth during this era was driven by streetcar lines. Now that’s Transit-Oriented Development! 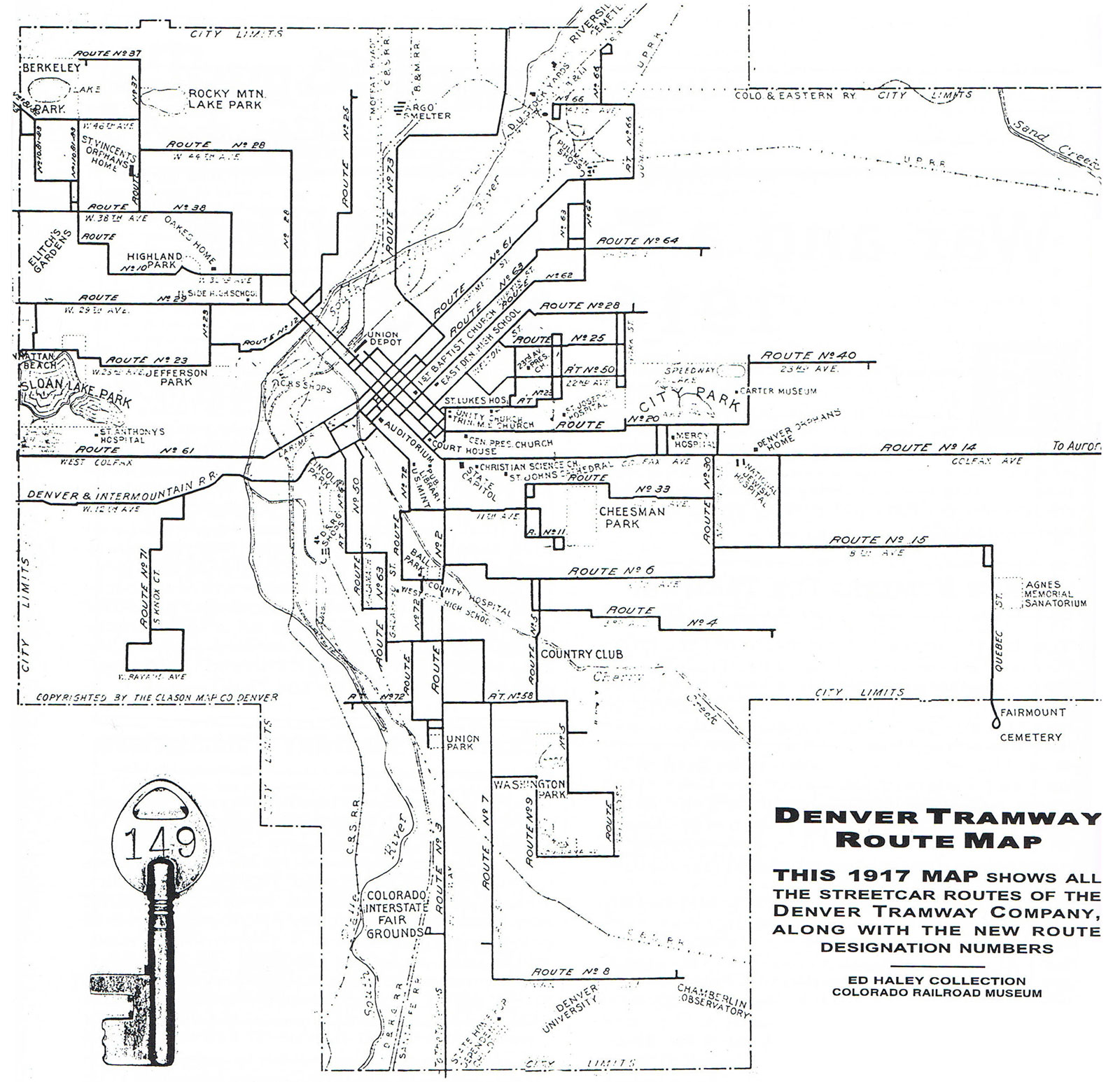 Here are the 1910s parcels colored in red over a current Google Earth aerial: 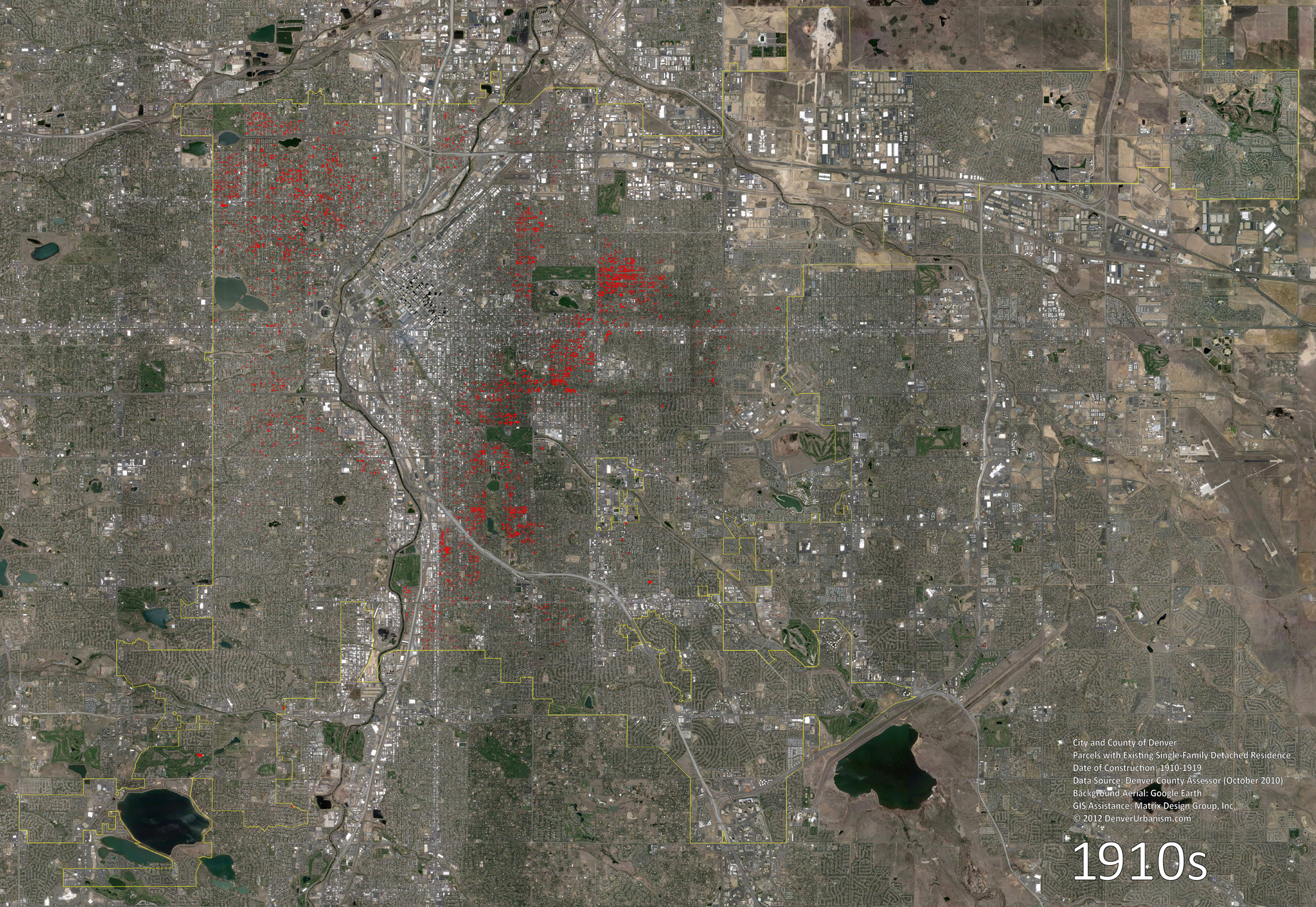 Now for the architecture! Thanks again to my collaborator on this project, Mark Zakrzewski, here’s a look at what Denver home builders were building in the 1910s:

In 1893, the Greene brothers (mentioned in our 1900s post) began developing the California Bungalow in Pasadena and it eventually became America’s favorite early 20th Century home. This was the case in Denver as well, as the Bungalow was Denver’s most favored style from 1910-1930. Adaptable to any climate, Bungalows were inexpensive and versatile. They were built in turn-of the century neighborhoods such as Washington Park, Berkeley, Congress Park, and West Highland in particular. This was also around the same time Frank Lloyd Wright began working on a series of homes featuring horizontal lines and wide overhanging eaves which would become known as Wright’s Prairie style.

1. Prairie. Wright’s Prairie style began in Oak Park, Illinois and was one of the few indigenous American styles. The Prairie style exhibits a strong horizontal emphasis and low pitched or flat roofs with overhanging eaves. The home features a band of windows (often embellished with stained or leaded glass) under the eave which is characteristic of the style. 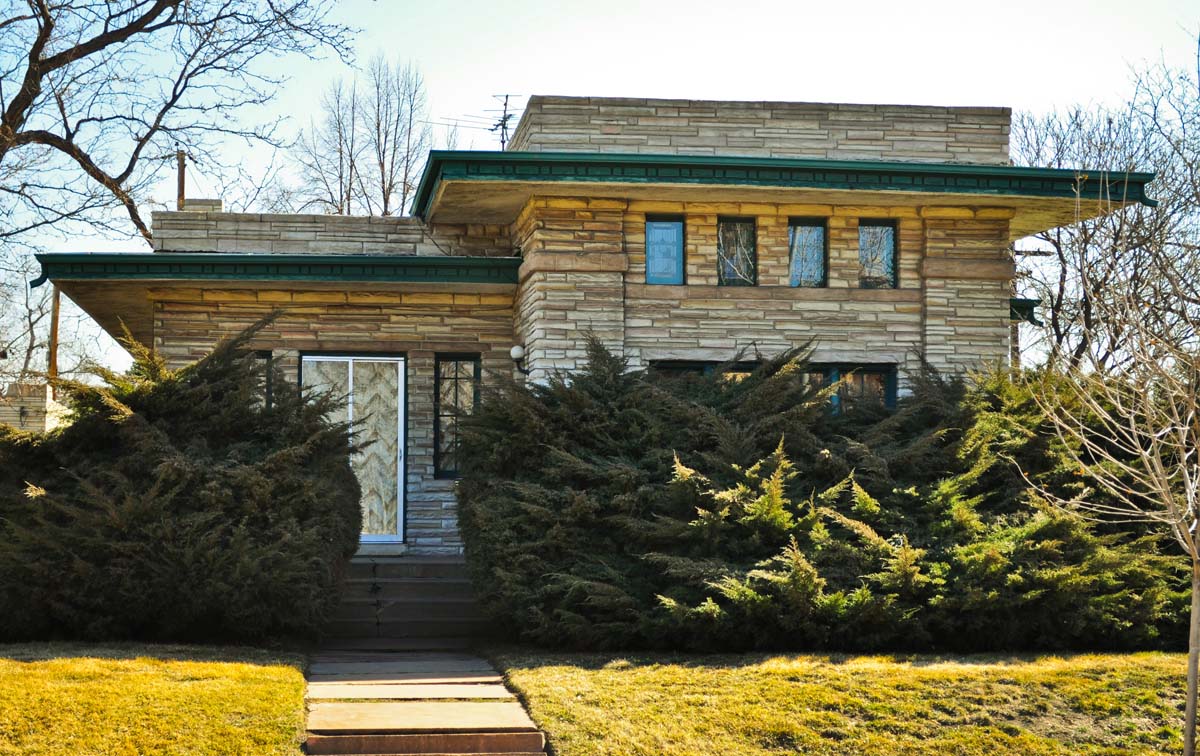 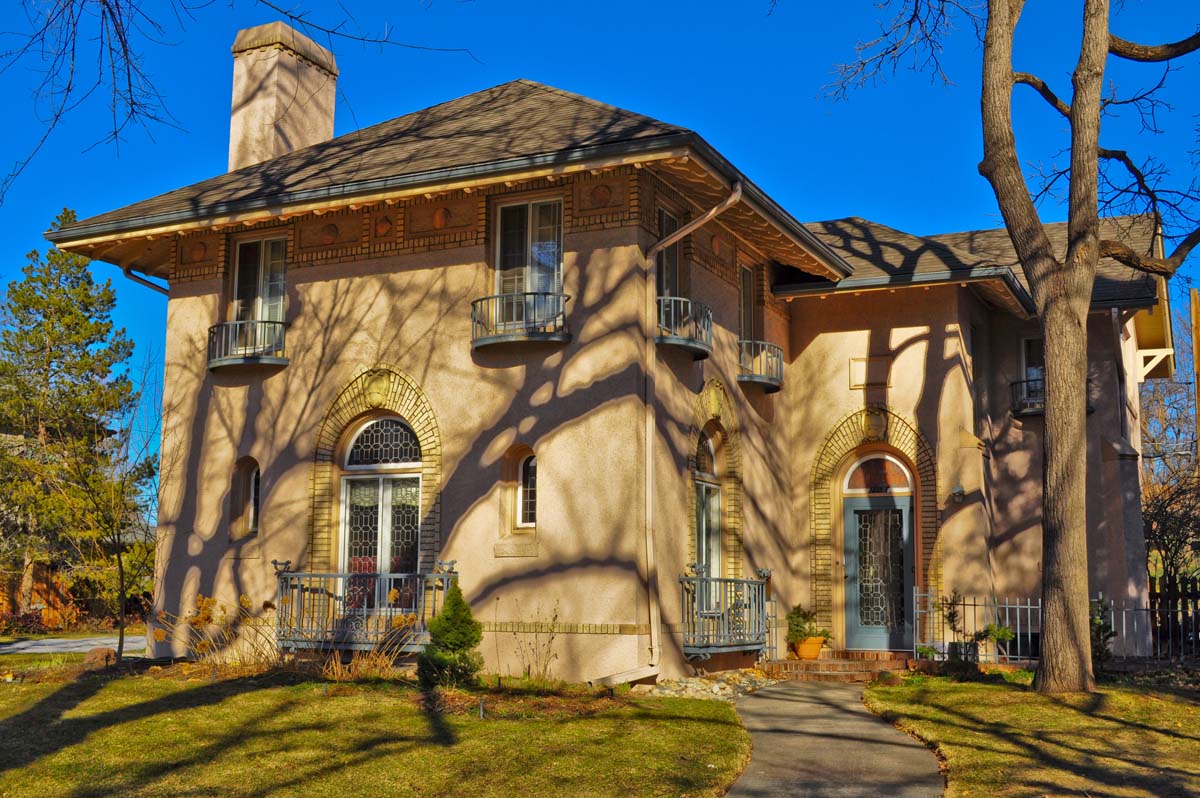 3. Tudor. The style is more accurately based on a variety of late Medieval English prototypes rather than the characteristics of early 16th-Century Tudor, England for which it is named. Steeply pitched roofs, cross gables, half-timbering over stucco, tall narrow windows with multi-pane glazing ,and massive chimneys are common elements of the style. This home checks all the boxes including the second-story overhang. 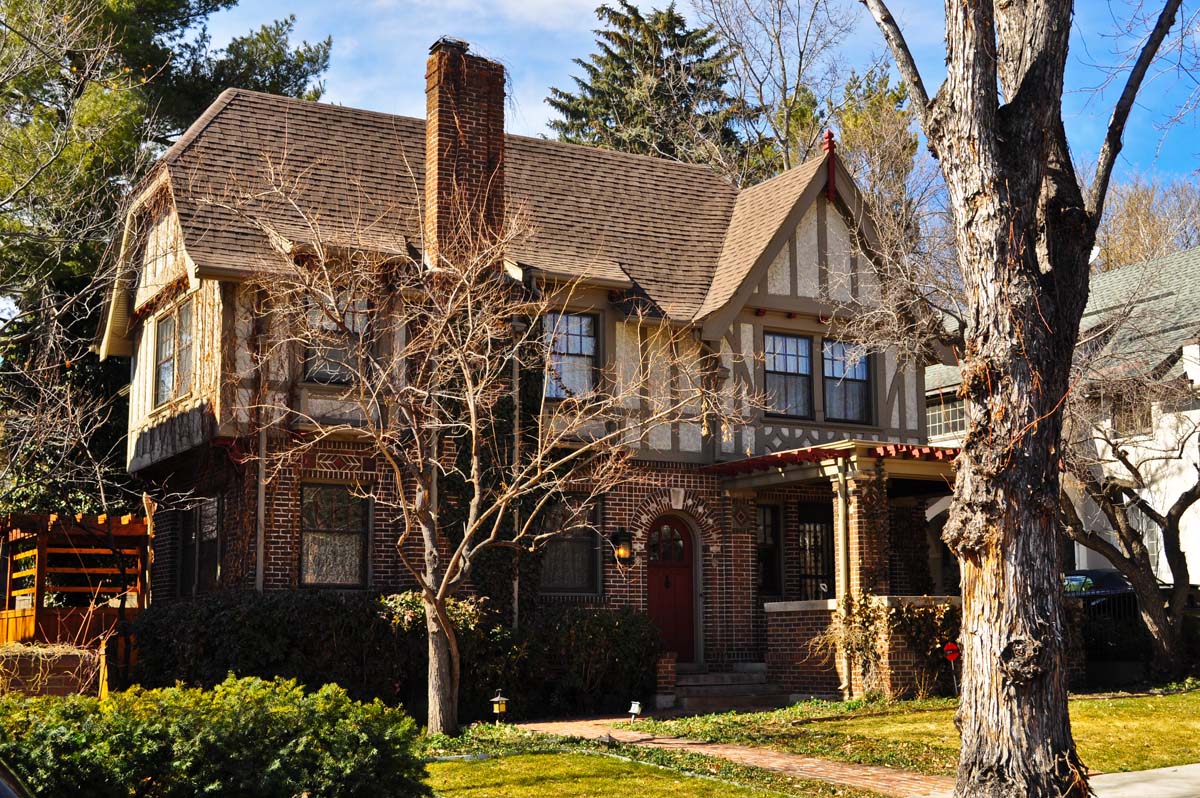 4. Foursquare. A high-style Neoclassical version of the Denver Square. The façade is symmetrical with balanced windows and a center door. Dominated by full-facade two-story porch with Corinthian columns, this home is accented with paired chimneys, porch balustrades and full-height pilasters. The wooden doorway has side lights and a transom window. 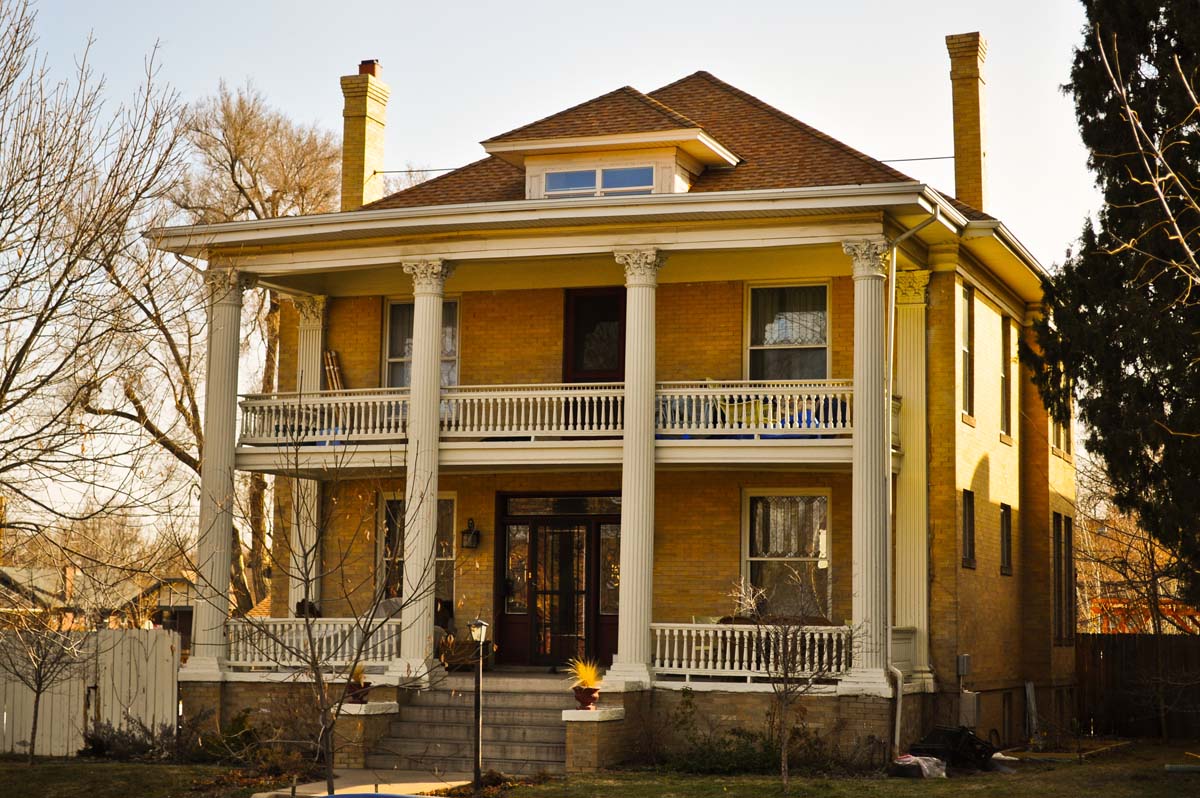 5. Denver Square. Features a large curvilinear mission style parapet and a decorative cornice with small dentils. Balustrades run along both the second and third story porches and the full-length arcade style porch is accented with scrolls. 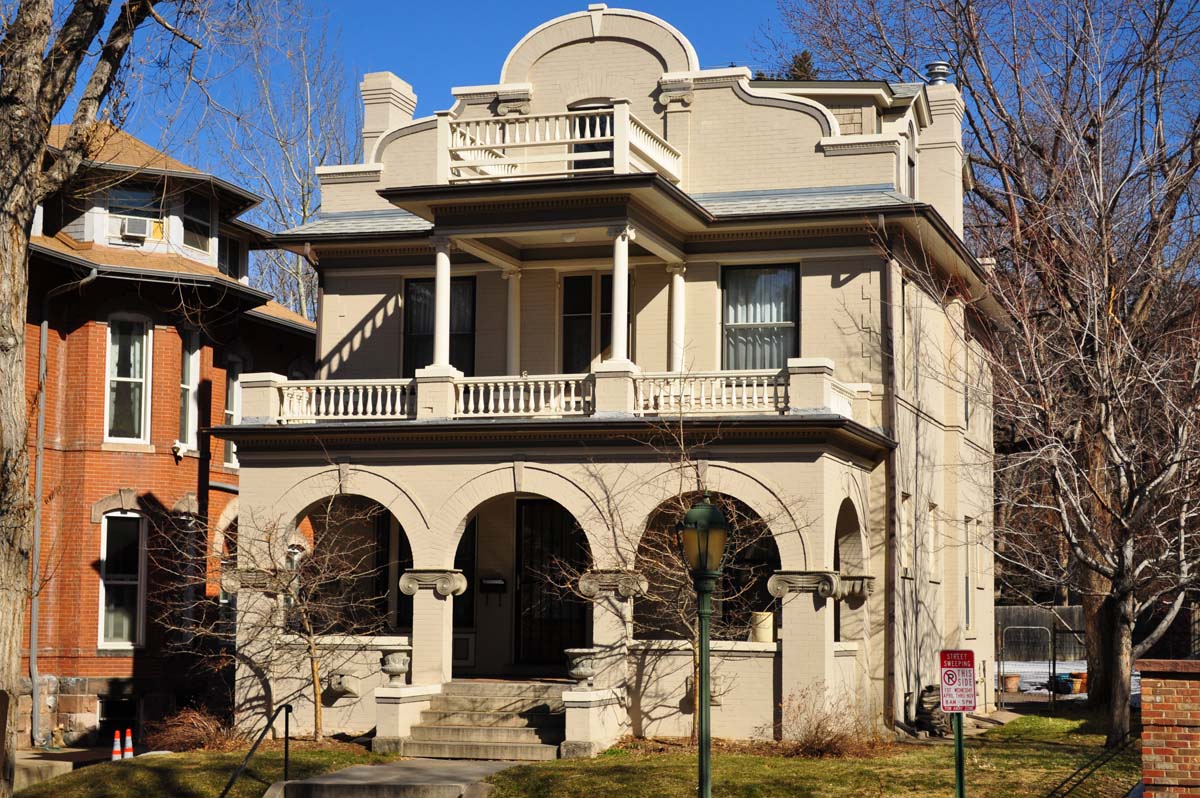 6. Colonial Revival. Side-gabled with steeply pitched roof with an eyebrow dormer, this home features polychrome brickwork on the chimney, the base courses, and above the windows affecting an arch. The porch has Doric columns and the doorway is highlighted by sidelights. 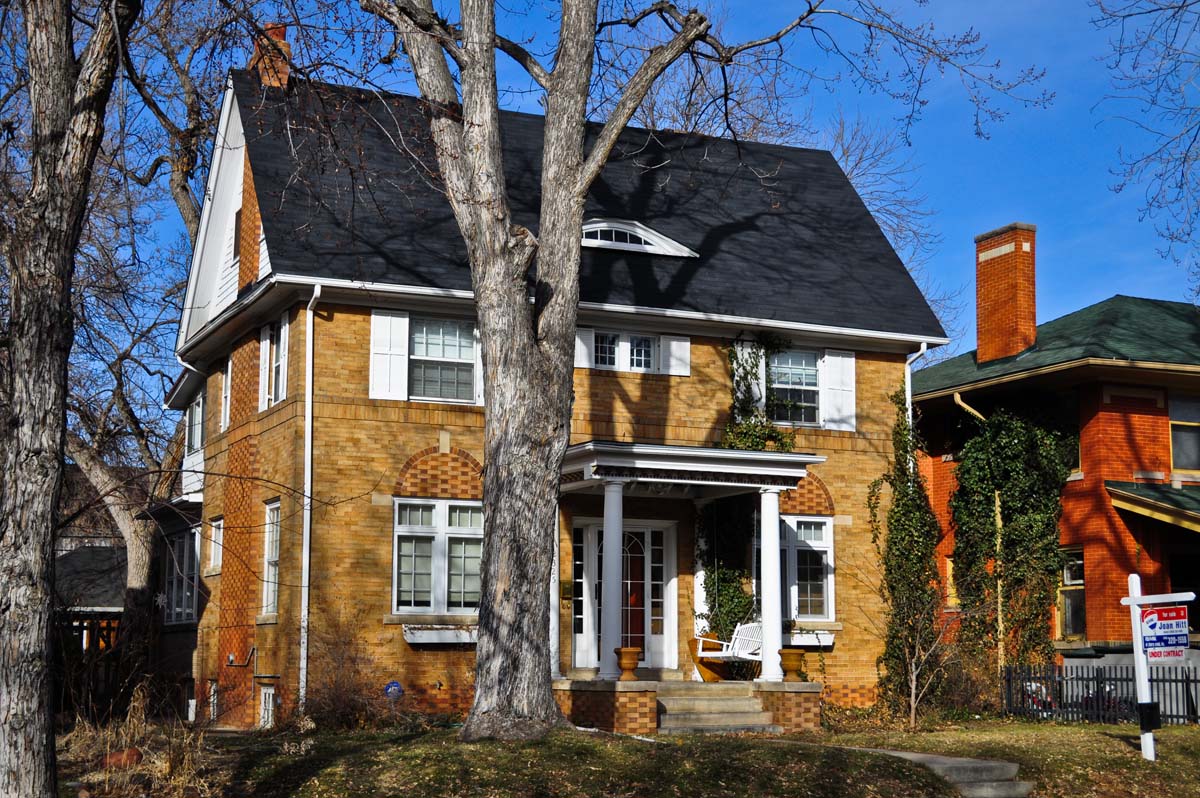 7. Colonial Revival. This home features a steeply pitched parapeted roof with paired end chimneys in the Dutch urban tradition. The entry way has a segmental pediment with brick in place of the columns. The through-cornice, Flemish style gables are unusual. Brick is used to affect quoins and again to create segmental arches over the windows. 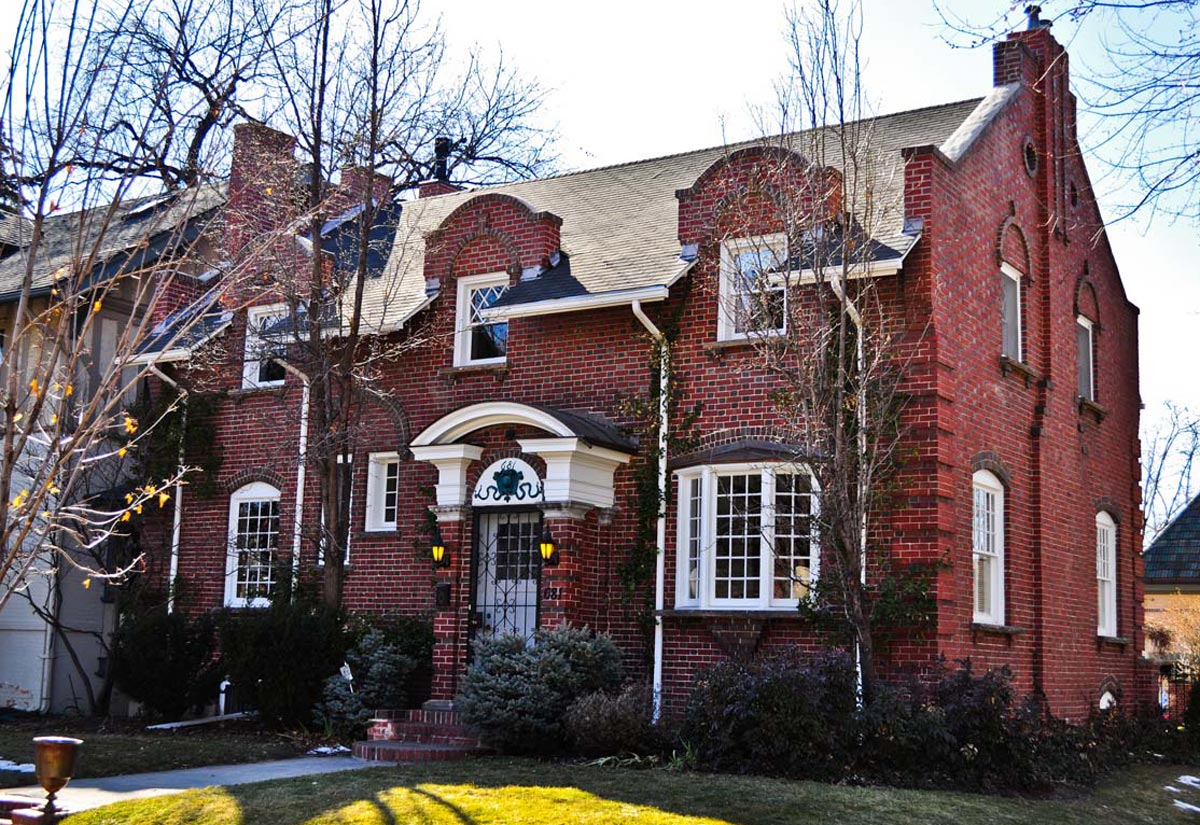 8. Craftsman. Two-story side-gabled shed roof style with clipped or Jerkinhead gables and a front facing dormer which is also clipped. The full-length front-porch has massive battered columns and exposed woodwork and rafter tails common to the style. 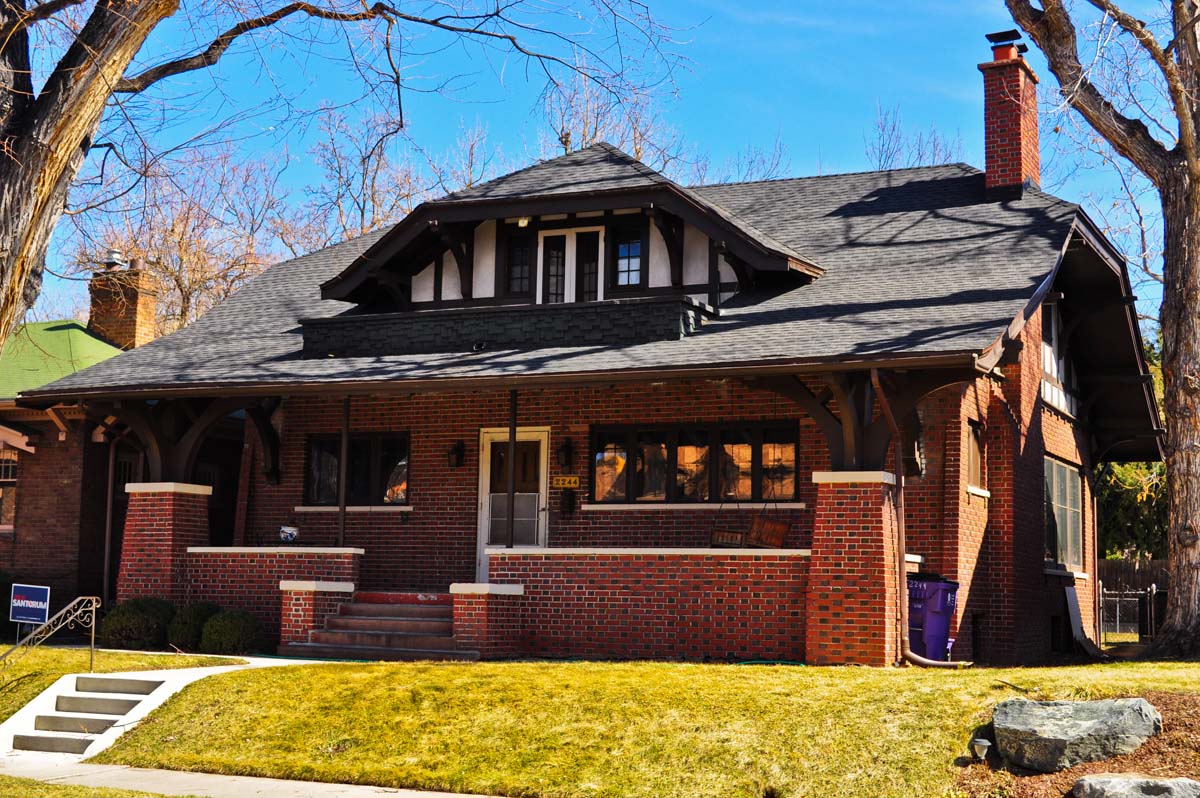 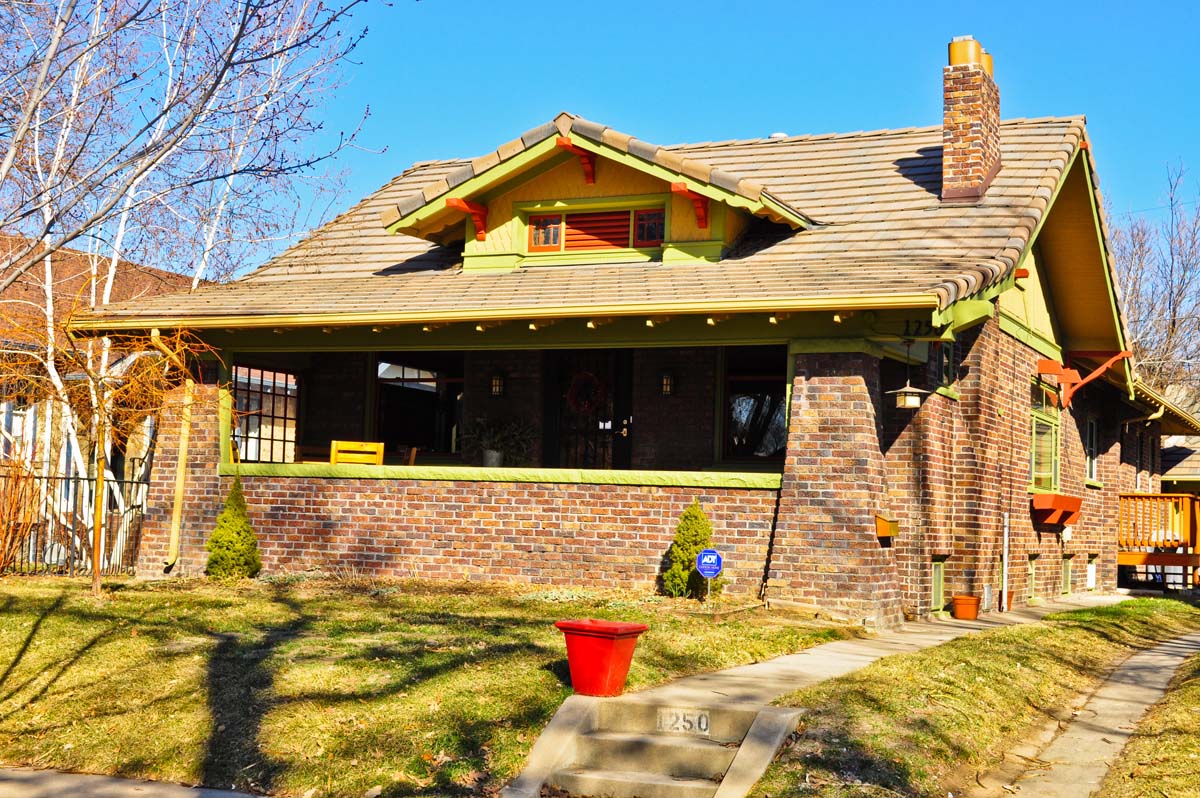 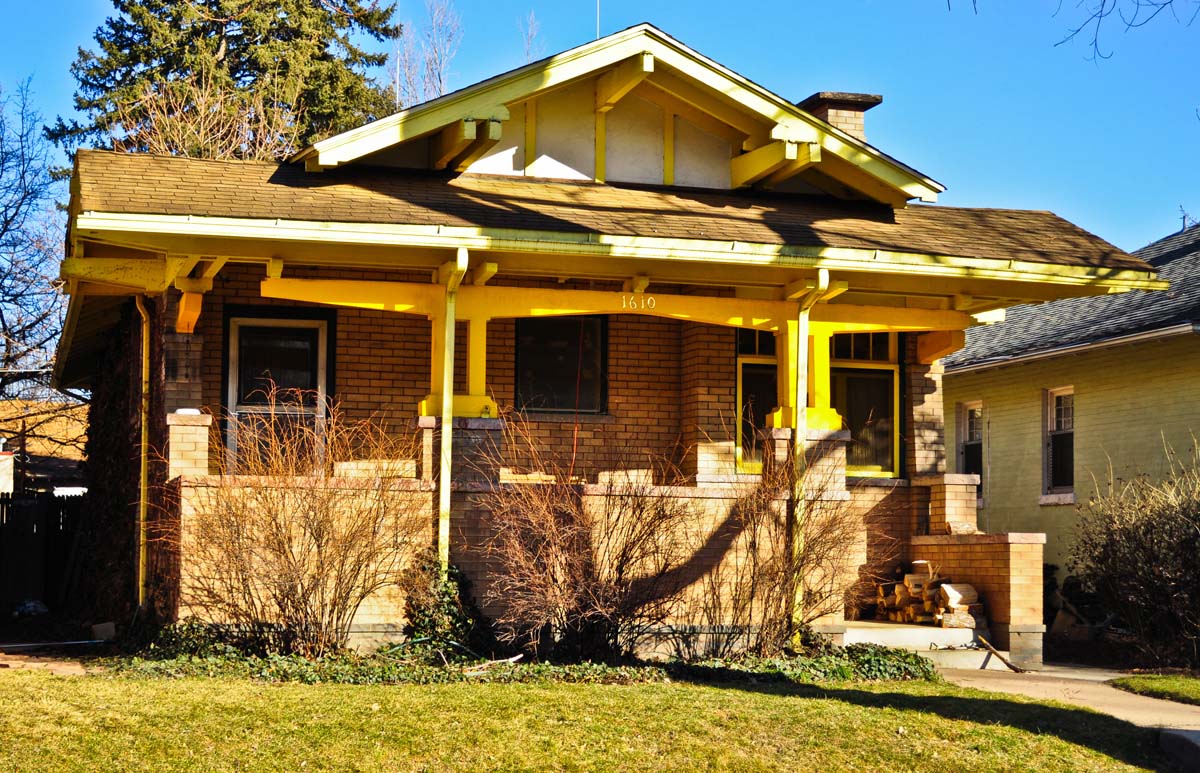 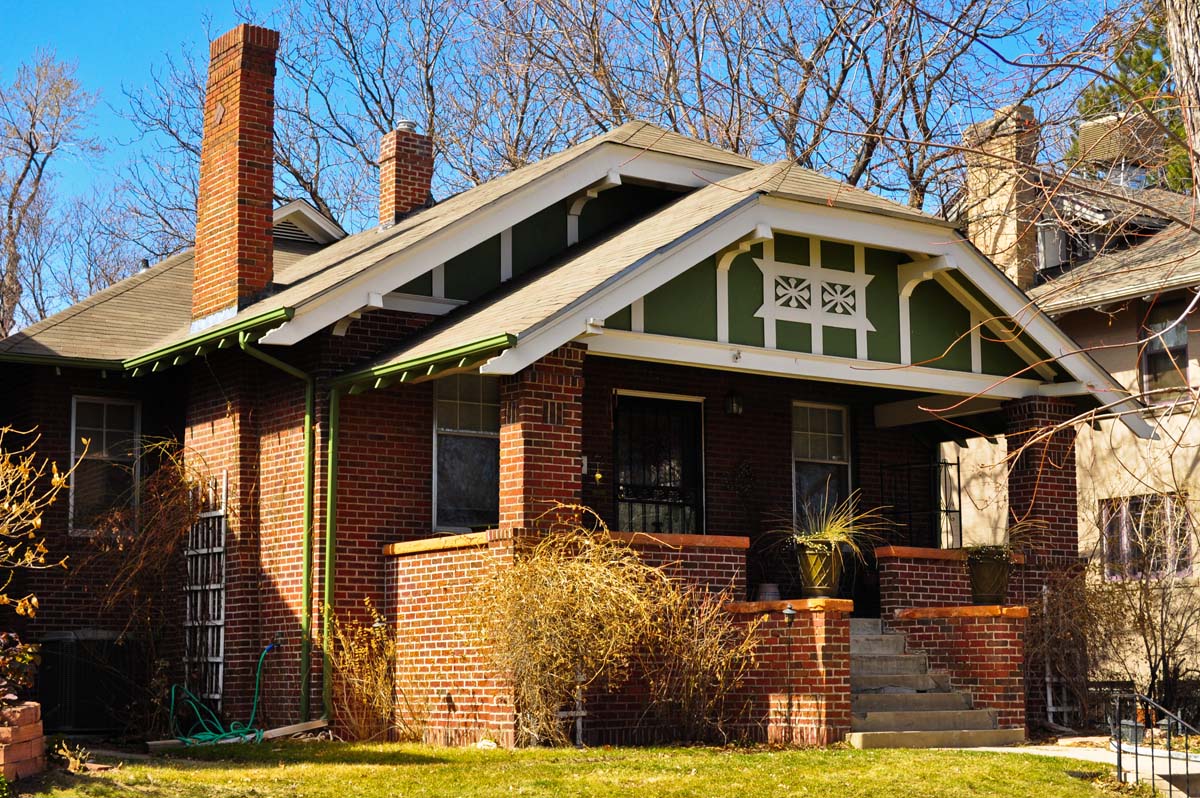 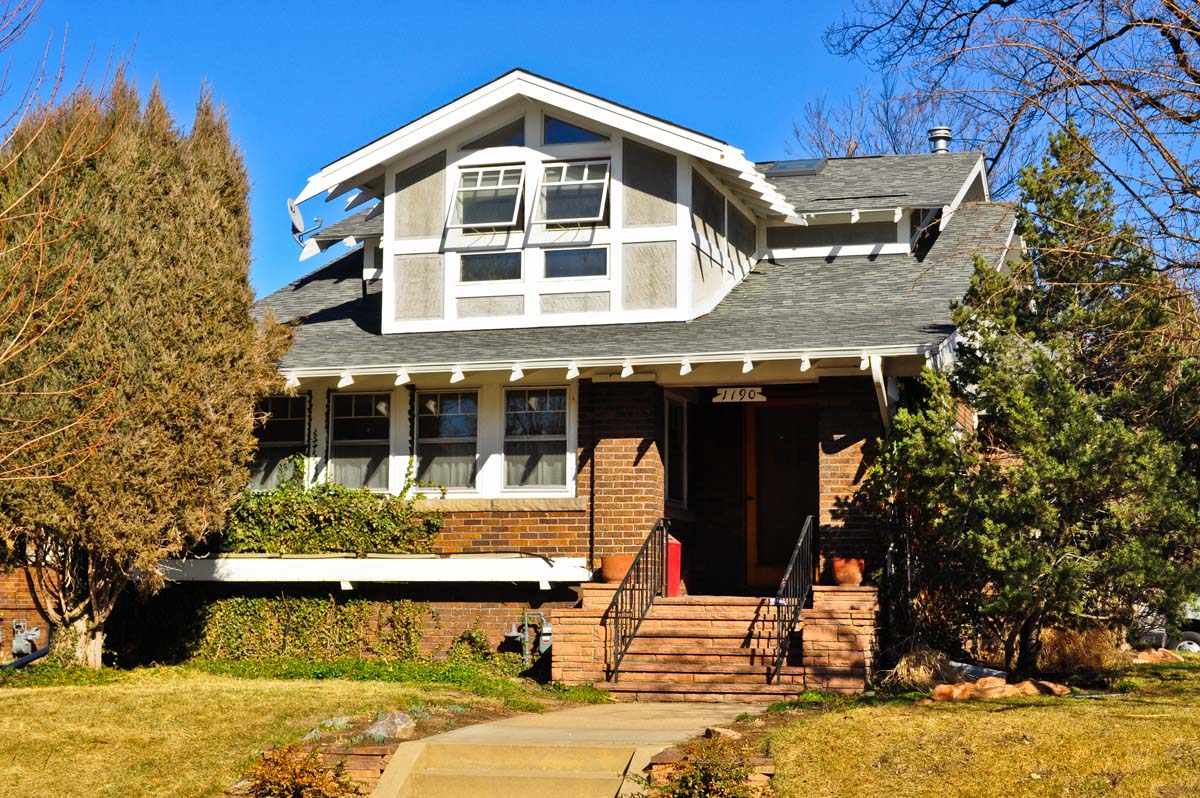 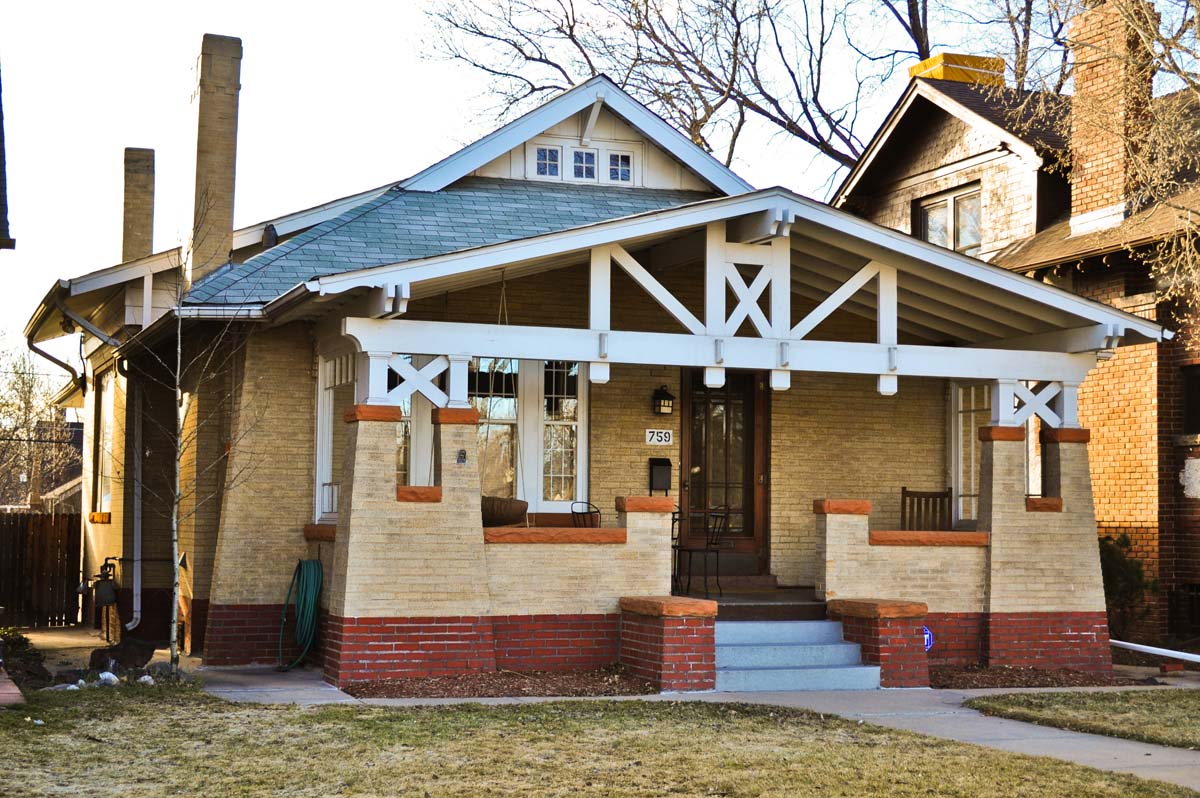