Next in our investigation of the geographic and architectural attributes of Denver’s single-family homes is the decade of the 1950s. For previous installments in this series, please use the links below:

The 1950s was Denver’s tenth full decade as a city. Denver celebrated its centennial in 1959 as part of the broader Colorado “Rush to the Rockies” centennial celebration throughout the state. By the 1950s, suburbanization was in full swing and most of the growth was occurring outside of Denver’s borders. From 1902—when Article XX of the Colorado State Constitution was adopted that created the City and County of Denver—until 1940, the city’s boundaries did not change. For those 38 years, the city’s growth occurred entirely within the roughly 59-square mile area established in 1902 as the City and County of Denver. In 1941, Denver began annexing new territory on its periphery. From 1940 through 1949, Denver annexed 4,907 acres of land, or approximately 7.7 square miles, much of that for the expansion of Stapleton International Airport. In the 1950s (1950 through 1959), Denver annexed 4,736 acres of land, or about 7.4 square miles. Nevertheless, Denver was capturing through annexation only a small percentage of the suburban growth that was occurring throughout the metropolitan area at that time. Stay tuned for the 1960s and 1970s, however, when Denver really got serious about annexations. 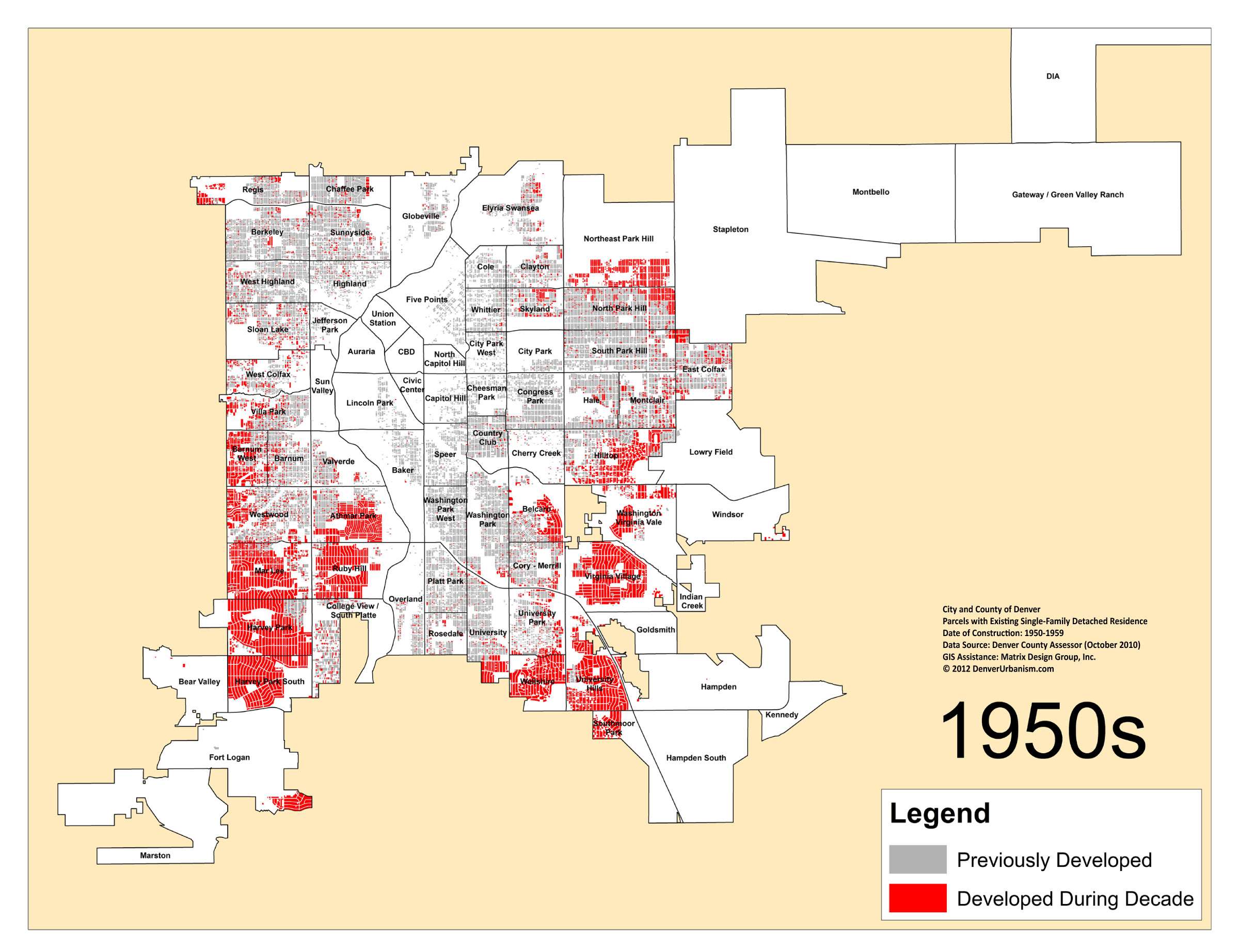 That’s a lot of red!

We saw a preview of this in the 1940s, but the 1950s represents the era when subdivisions were, for the most part, built out in their entirely within the decade. Looking back at our maps from the 1880s through the 1930s, the red parcels representing new homes are generally scattered around—a few over here, a few over there—like confetti tossed into the sky. Certainly, some neighborhoods were hotter than others, but there was still a general pattern of dispersion to Denver’s single-family housing growth. Neighborhoods like Berkeley, Globeville, Washington Park, and many others saw homes built within their boundaries over the course of five or six decades. In the 1950s, we start to see whole neighborhoods come online all at once. Big chunks of Southwest Denver (Barnum West, Westwood, Athmar Park, Mar Lee, Ruby Hill, Harvey Park, and Harvey Park South) were developed in the 1950s. Similarly, a broad front of development occurred along Denver’s eastern flank in the Wellshire, University Hills, Belcaro, Virginia Village, Washington-Virginia Vale, Hilltop, and Northeast Park Hill neighborhoods. Only those neighborhoods closest to Downtown saw no growth during the 1950s.

Here are the 1950s parcels colored in red over a current Google Earth aerial:

Now, let’s take a look at the style of homes built during the 1950s. Here are Mark’s photos and architectural descriptions:

The ubiquitous Ranch house rose to prominence this decade. Originated in the 1930s by California architects, it gained in popularity during the 1940s to become the dominant style throughout the country during the ‘50s and ‘60s and, indeed, are still popular today. The style is loosely based on early Spanish Colonial precedents of the American southwest, modified by influences borrowed from the Craftsman, Bungalow, and Prairie style modernism of the early 20th Century.

1. Minimal Traditional. The immediate predecessor of the Ranch house, as described previously, the style was a simplified form loosely based on the previously favored Tudor style of the preceding two decades. Featuring dominant front gable and chimney, the steep Tudor roof pitch is lowered and the façade is simplified with the majority of the traditional detailing omitted. The eaves and rake are close (East Colfax):

3. Split Level. A multi-story variation of the dominant one-story Ranch house. The style retains the horizontal lines, low-pitched roof, and overhanging eaves of the Ranch, but added a two-story unit bisected by a one-story wing resulting in three floor levels (Mar Lee):

4. Raised Ranch. A two-story variation of the Ranch with the lower story at ground level or partially submerged below grade, and typically asymmetrical with a low-pitched side-gable roof with large double-hung, sliding, and picture windows. They usually feature little decorative detailing, aside from decorative shutters and porch-roof supports (Belcaro):

5. Second Phase International. As described from the previous decade. the style encompasses functionalism and reductivism, in that the design is influenced by functional concerns expressed with austere simplicity. Common characteristics include a horizontal orientation with strong secondary verticals, eaveless walls, large sections with clear or tinted glazing, glass or metal curtain walls, rectilinear conception of the structure’s volumes, no ornament, flat and unorthodox roofs, and the use of the cantilever. Some examples of the style from the decade, left (Cheesman Park), right (Wellshire):

6. Usonian. The Usonian style is based on Frank Lloyd Wright’s concept of naturalism. Defining characteristics include a horizontal orientation, cubist conception of the building’s volumes, ribbon, corner, and clerestory windows, traditional materials (wood and stone), the use of similar materials inside and out, geometric ornament, overhanging eaves and the use of the cantilever. Several examples from the 1950s, left (Hilltop), right (Wellshire):

7. Colonial Revival. A later example that displays the changing postwar fashions that led to a simplification of the style in the 1940s and 1950s. Later examples are most often the side-gabled type that feature simple stylized door surrounds, cornices or other details that merely suggest their colonial precedents rather than closely replicating them. The home features a three-ranked facade with a gabled entry portico with a curved underside (Belcaro):

8. Cape Cod. A sub-type of the Colonial Revival style, this home features a simple rectangular shape with a steeply-pitched side-gable roof. 20th Century Cape’s typically place the chimney at one end instead of the center and have large dormers, decorative shutters and often include an additional room or garage attached to one side (Belcaro): 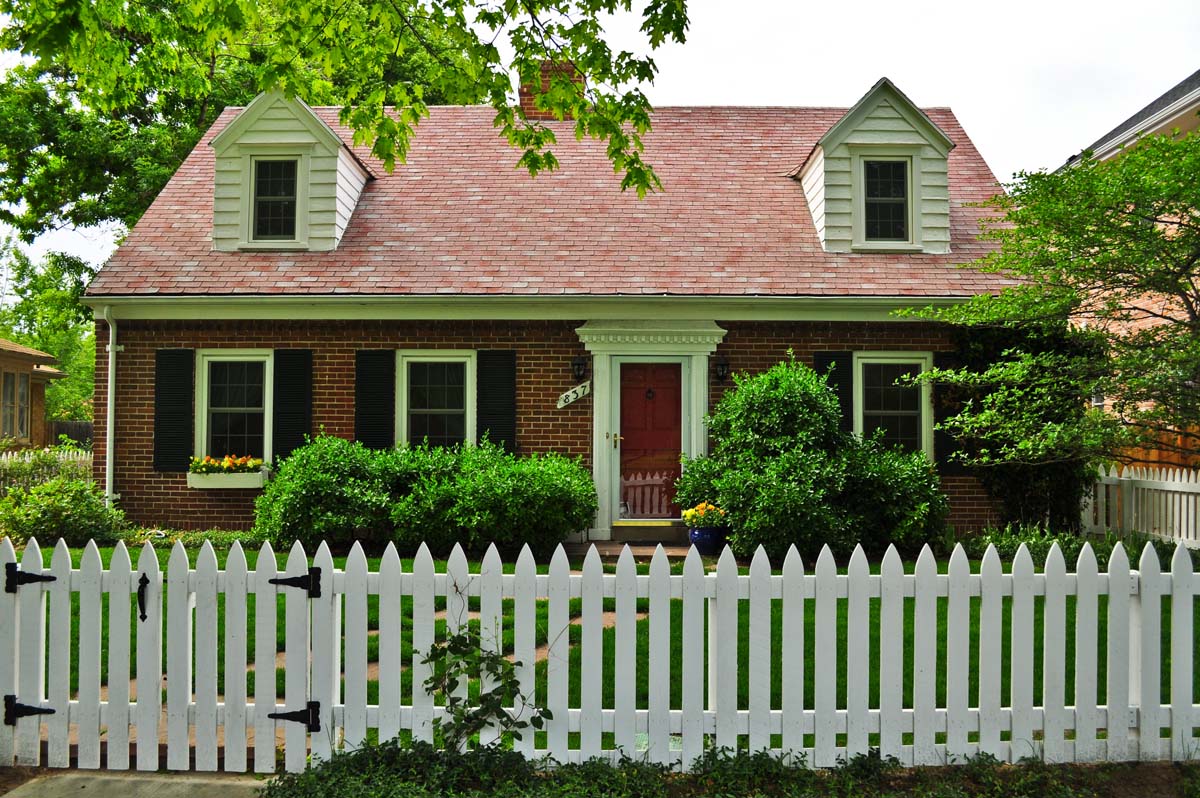 By popular request, here’s an additional section on 1950s architecture from Mark, featuring another one of the decade’s key architectural styles: 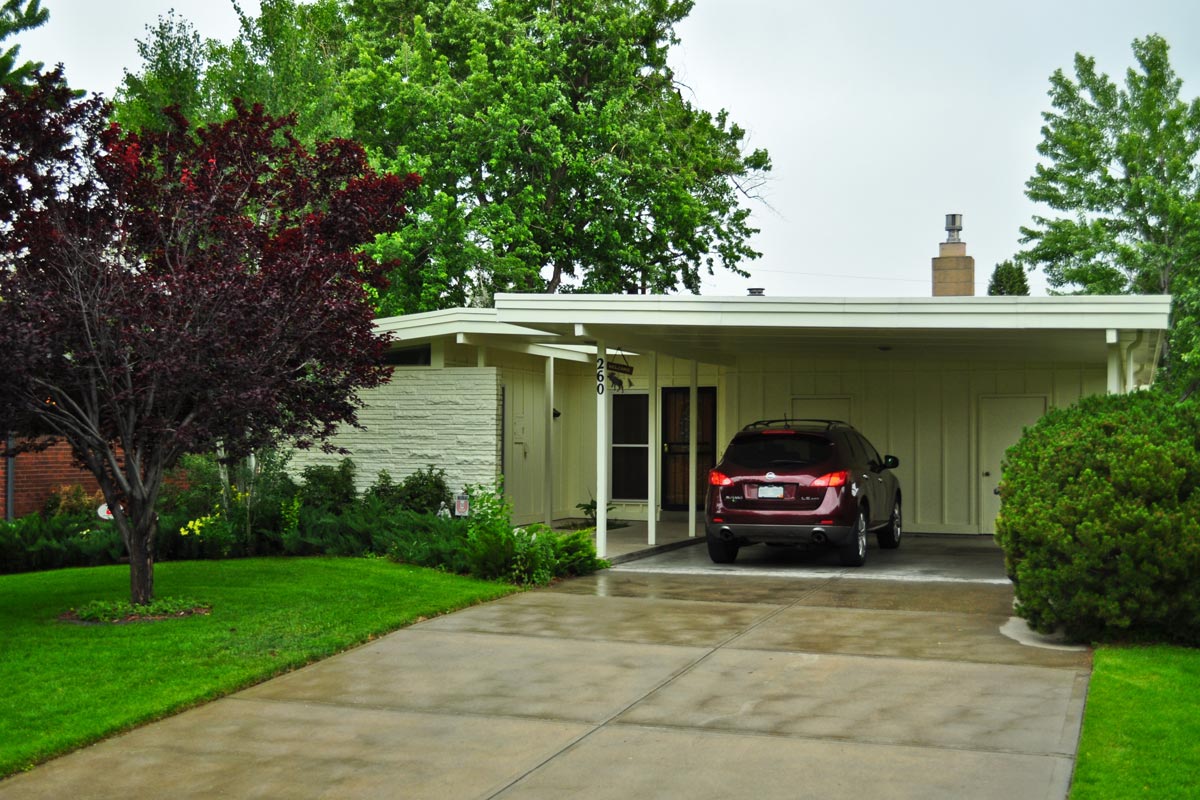 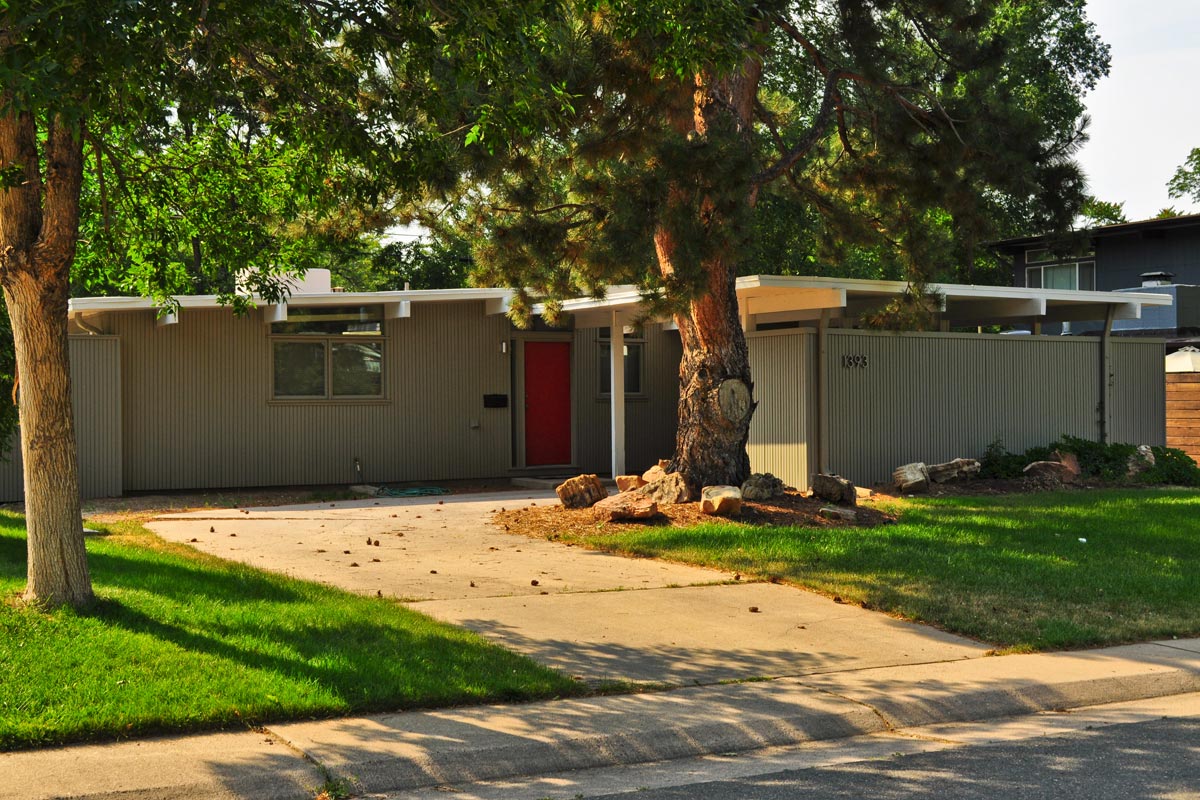