The “Aughts” decade of the 20th Century is next in our DenverUrbanism series on the geographic and architectural evolution of Denver’s single-family residential neighborhoods. Today, we’ll take a look at 1900 to 1909. For previous installments in this series, please use the links below:

The 1900s was Denver’s fifth full decade as a city. The decade saw a major revision in the city’s government structure that would dramatically change how it would grow and operate in the future. Throughout the 19th Century, Denver was a statutory city located in Arapahoe County, which, at that time, was a huge county that stretched all the way to the Colorado-Kansas state line. By the turn of the century, however, there was strong political momentum for carving out Denver as its own county, as well as granting it special status as a “home rule” municipality which would free it from being micro-managed by the State and allow it to draft its own charter and organize and govern itself as it saw fit on matters of local concern. In 1902, Colorado voters amended the state constitution (Article XX) which established a consolidated “City and County of Denver” and also granted Denver home rule powers. Created by merging what was then the City of Denver with the municipalities of Argo, Berkeley, Elyria, Globeville, Montclair, Valverde, and surrounding areas of unincorporated Arapahoe County, the new City and County of Denver covered 60 square miles and was declared in the state constitution as a “single body politic and corporate;” a “new sort of municipality having the combined powers of city and county governments.” 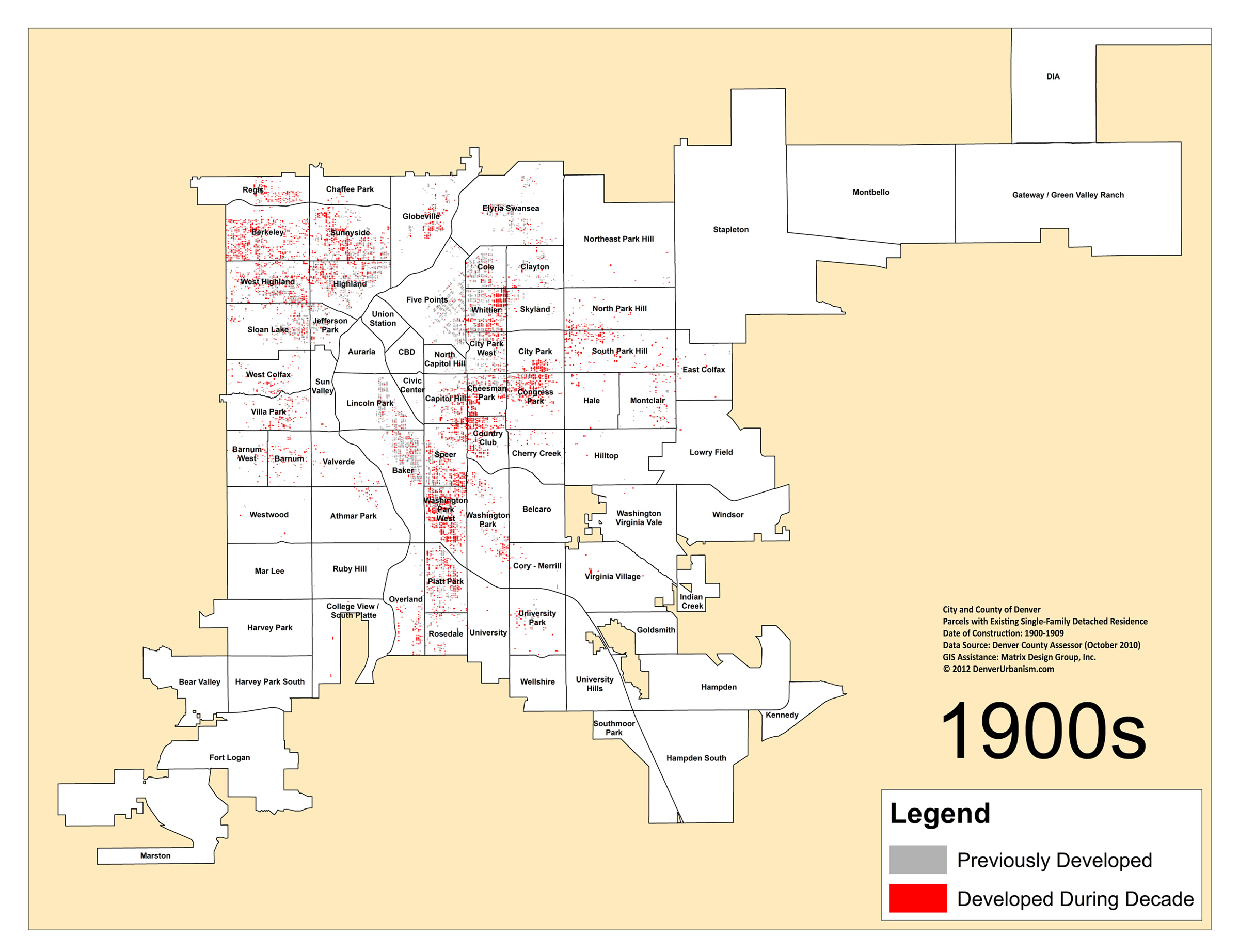 As this map shows, Denver continued to grow to the northwest and southeast of Downtown. Hot neighborhoods in Denver’s first “Aughts” decade were:

In Northwest Denver, Highland and West Highland continued to build out, while Berkeley and Sunnyside boomed. New subdivisions started springing up in the Regis neighborhood, while Sloan’s Lake, West Colfax, Villa Park, and other West Denver neighborhoods continued to see modest growth.

To the east, southeast, and south of Downtown, there were several major centers of growth: Whittier was all the rage, and Congress Park and the southern parts of the City Park neighborhood saw significant growth. The area around 6th and Downing was also booming, fueling growth in the Capitol Hill, Country Club, Cheesman Park, and Speer neighborhoods. The 1900s also saw the emergence of Washington Park West and Platt Park as very popular new neighborhoods, with the more adventurous folks building new homes “way over” on the east side of Washington Park. Park Hill continued to see modest growth, as did Overland, Rosedale, University Park, and Montclair.

Here are the 1900s parcels colored in red over a current Google Earth aerial: 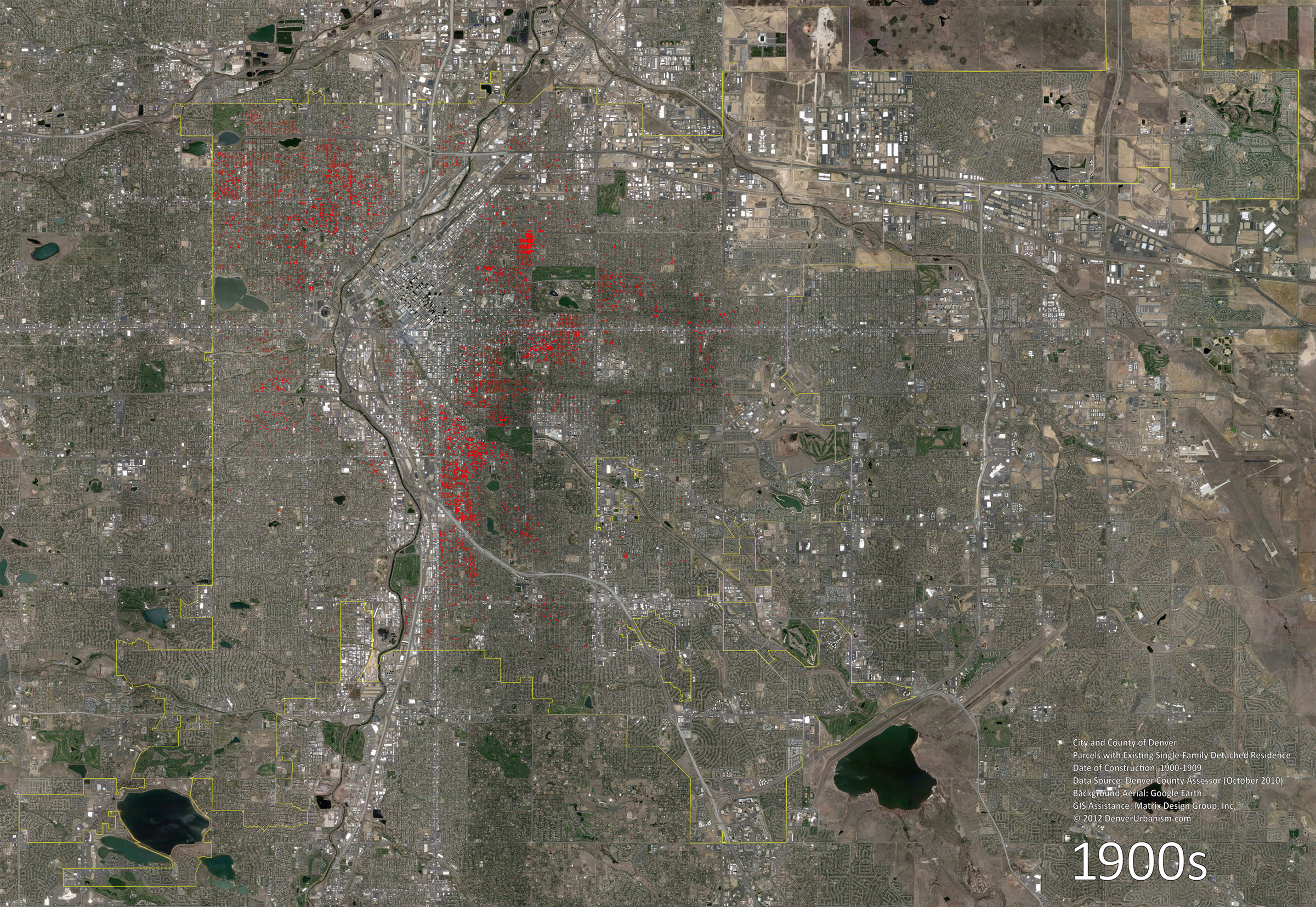 Next, how about some 1900s residential architecture? Here are Mark’s photos and descriptions of the architectural styles in vogue during the 1900s:

In the 1900s, Neoclassical and Colonial Revival were the fashion. While the wealthy commissioned architects to design academically correct examples, the middle class preferred the vernacular types derived from those styles: the Foursquare (locally known as the Denver Square) and the Classic Cottage; they were more-or-less standardized and therefore more affordable. Post-1893, builders constructed neighborhoods filled with rows of look-alike Foursquares and Classic Cottages. Bungalow and Craftsman homes also started appearing in the 1900s. Bungalows typically featured low-pitched gabled roofs, wide overhangs with exposed roof rafters and wood structure, and large wide front porches. Similar to the Craftsman, bungalows represented a simpler, more efficient, low-maintenance lifestyle. Bungalows replaced the Classic Cottage as the affordable home for the masses.

1. Dutch Colonial Revival. A typical side gambrel with a gabled-entrance portico, side lights and a fanlight over the door. The three front-facing shed dormers were a common attribute of the side gambrel type. Architect William Fisher designed this small Dutch Colonial and others for newlyweds which were advertised as “Bride’s Delights”. 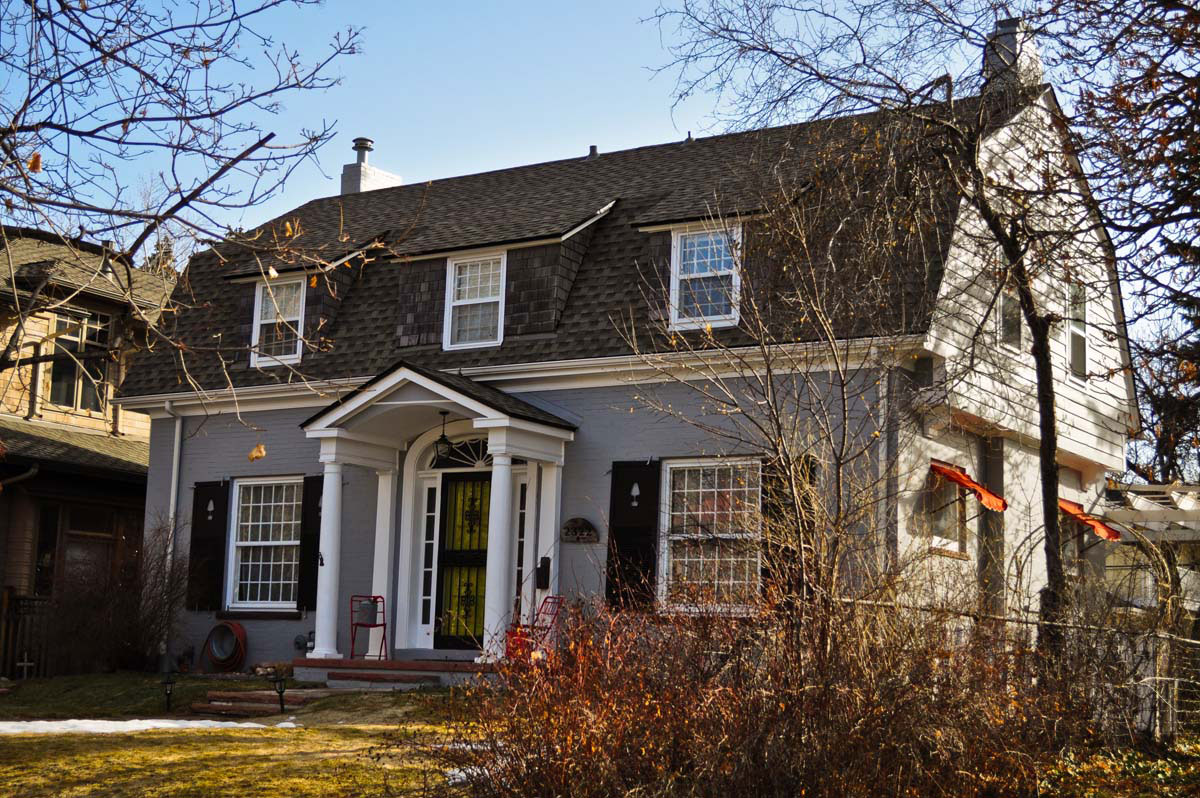 2. Foursquare/Denver Square. This collection shows the incredible variety possible in the Foursquare/Denver Square design. The first features a porch with a pediment and Queen Anne style turreted corner tower making it appear very grand. The second has an unusual Mission Revival-style parapet and window tracery. The third features a two-story neoclassical porch with pediment and fluted ionic columns, shutters and dentil molding. The fourth is a Colonial-inspired Square where it appears they enclosed the second-story balcony; its central dormer features broken pediments and the eaves are bracketed. The fifth shows what is possible with a simple Denver Square plan; it features a side-gabled roof with front dormers, Colonial in style. The entrance has arched windows with ornate grillwork and dentil detailing wraps the home. A Craftsman-style porch highlights the sixth example, which has an unusual side entrance and the motif is continued with the Craftsman style roof rafters. 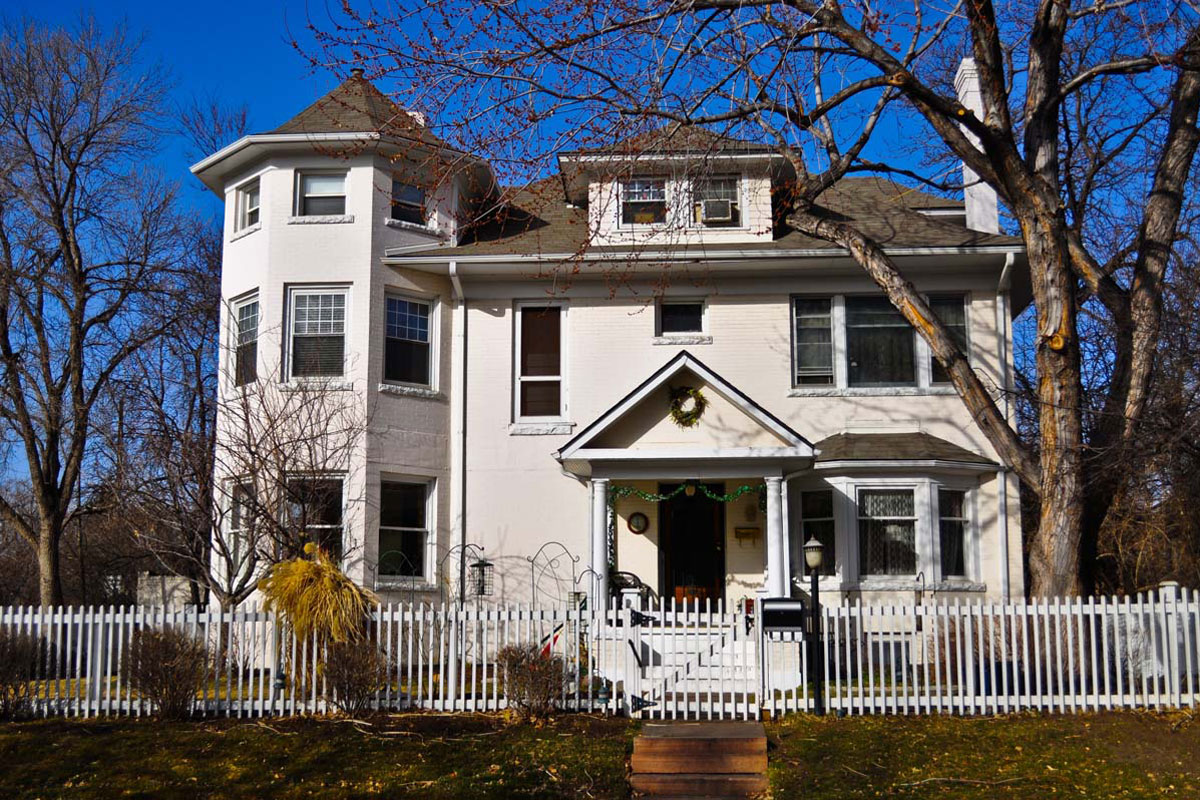 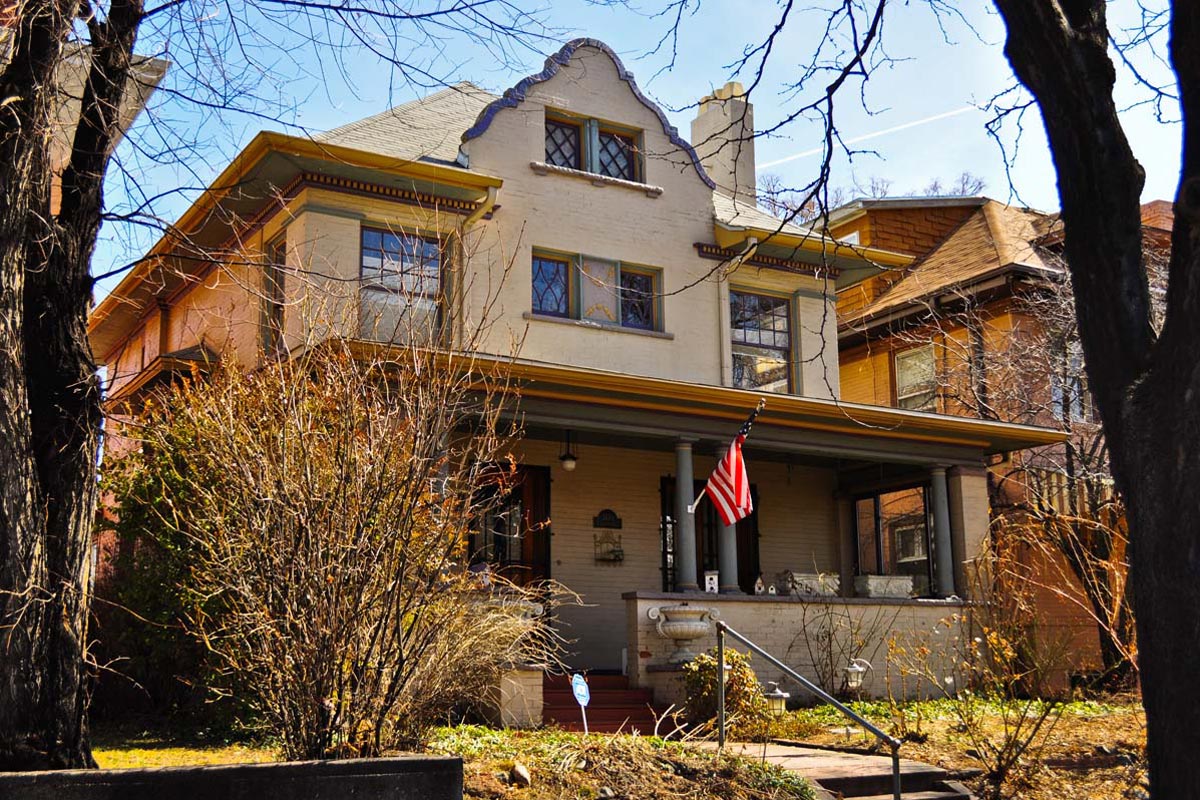 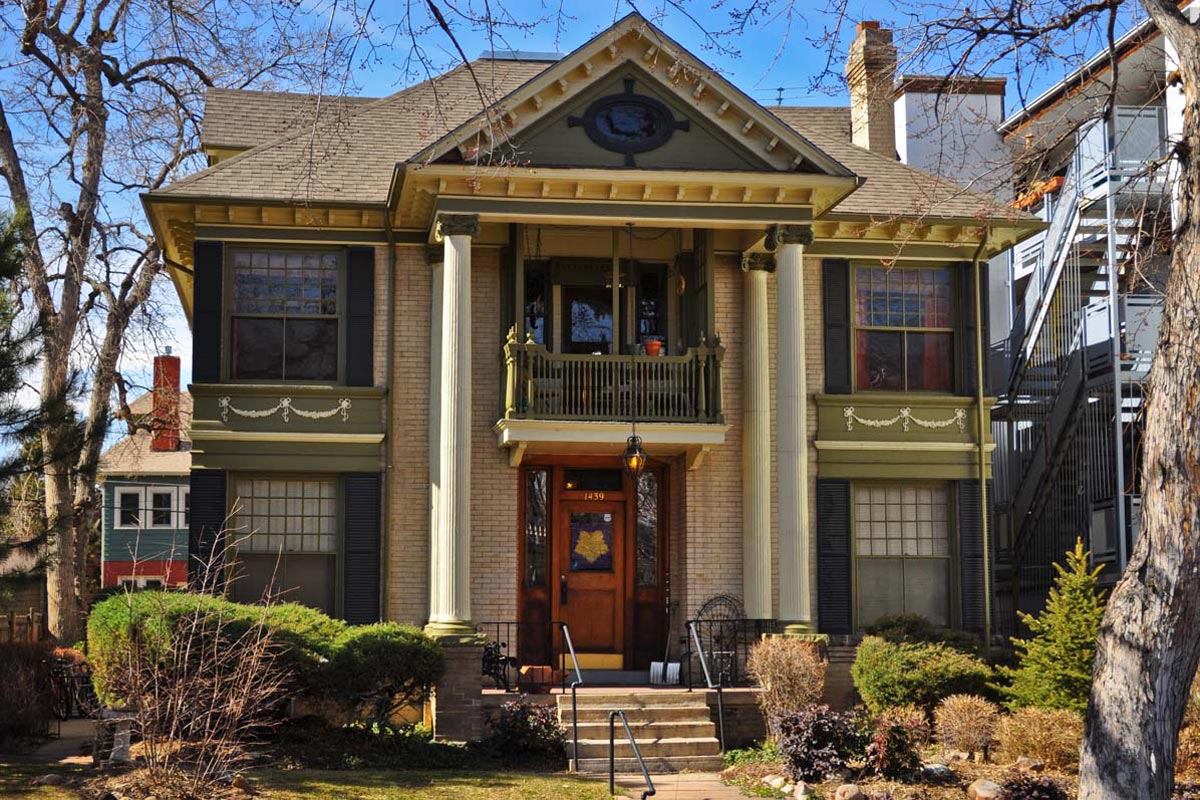 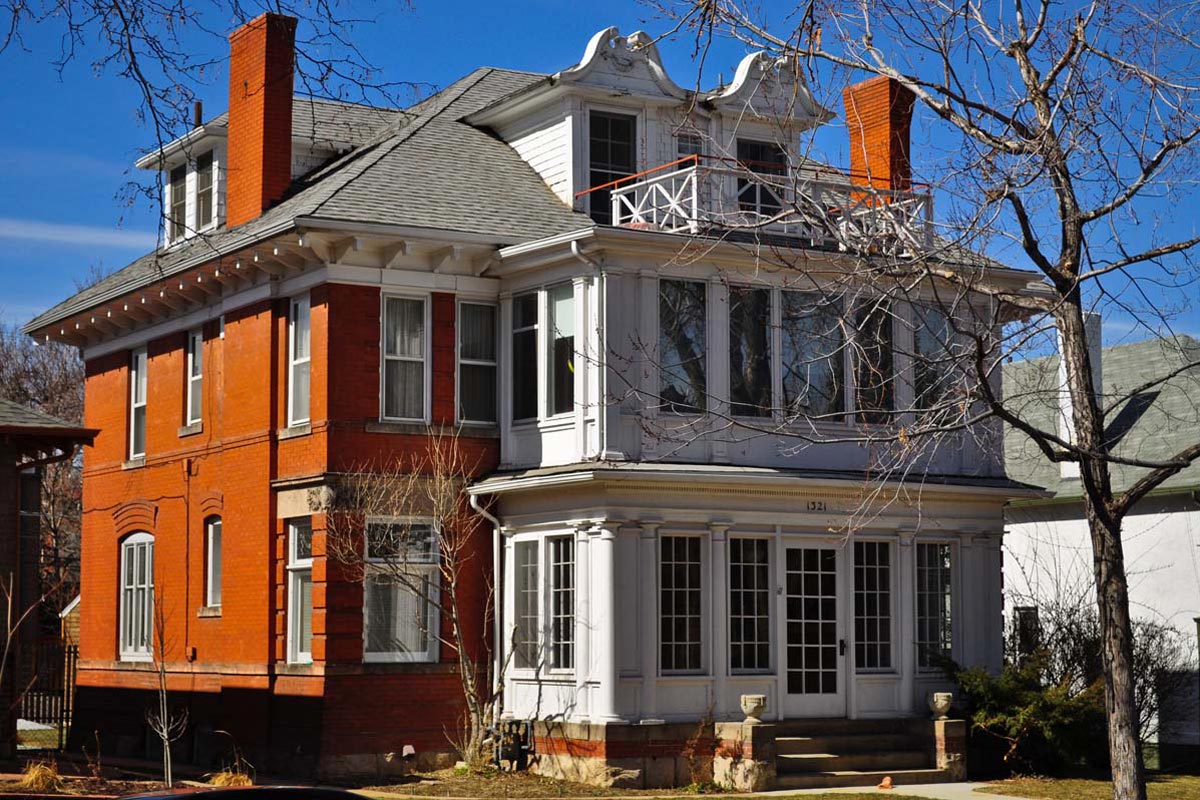 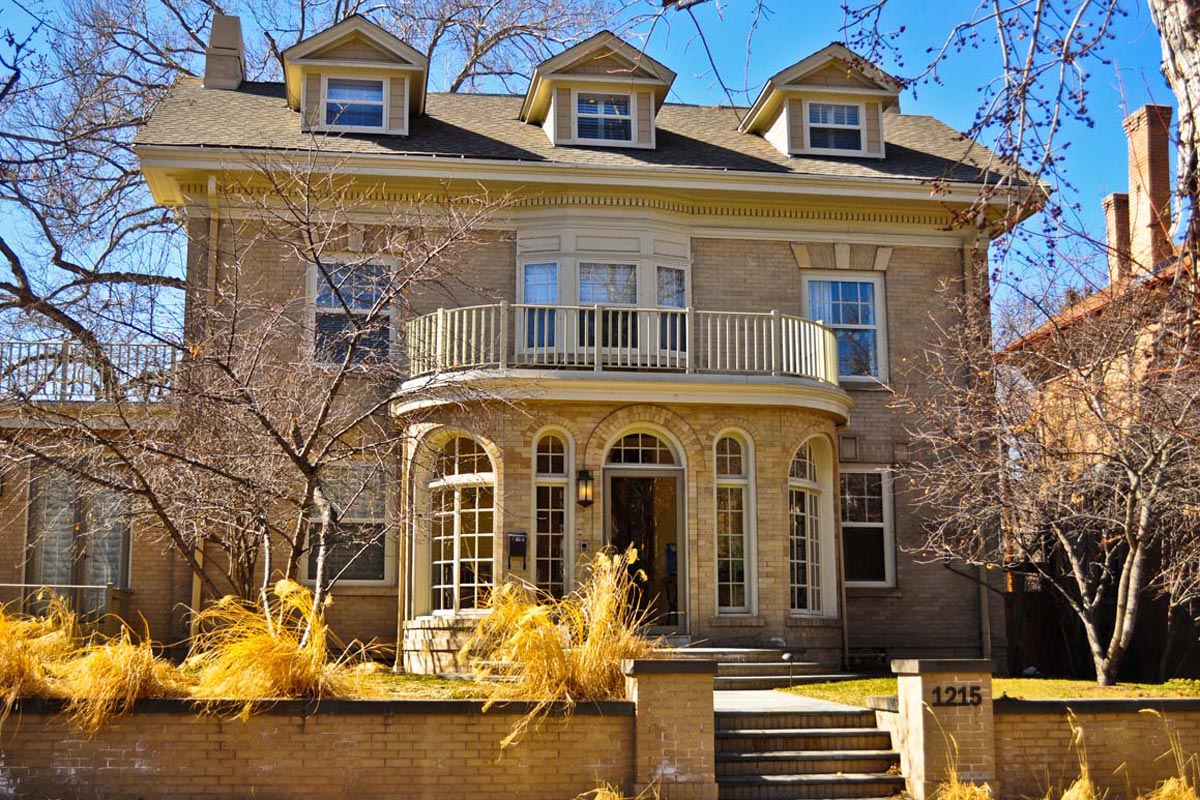 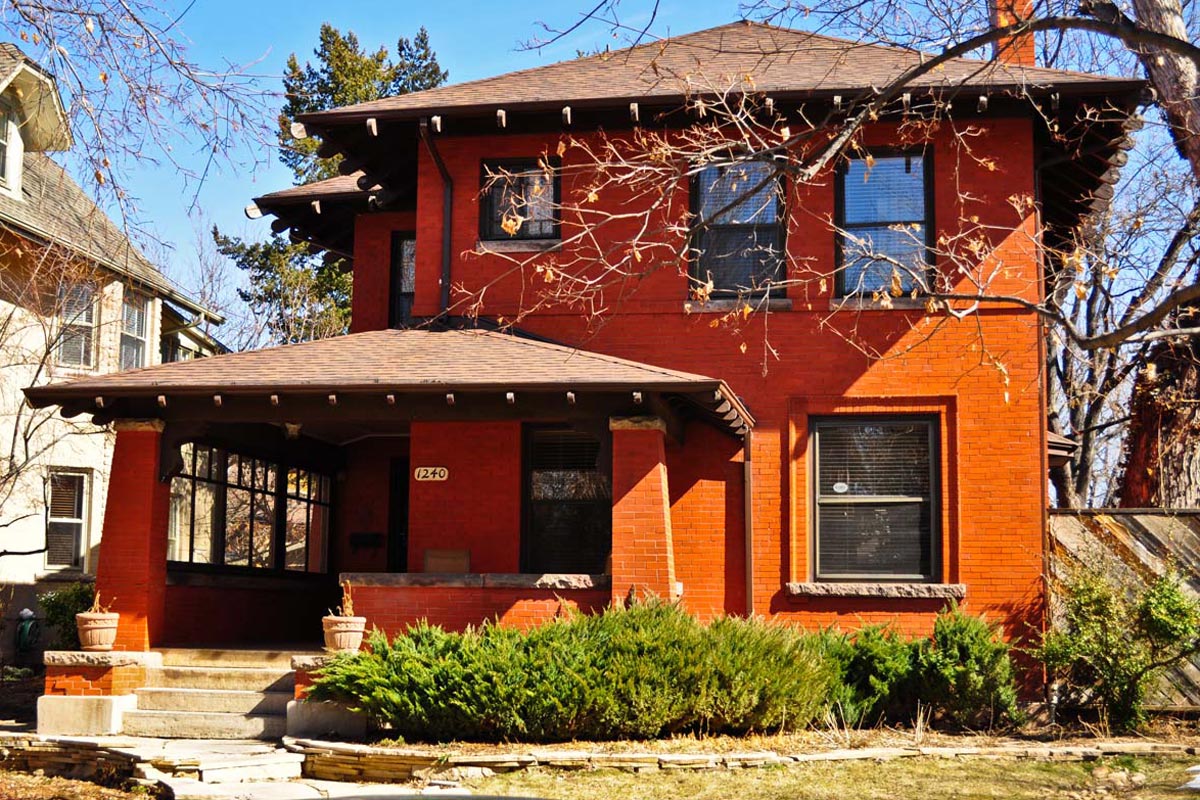 3. Neoclassical-Georgian Revival. The bay window and gable end are typically Victorian; however, the two-story porch and ionic columns are a Georgian adaptation. 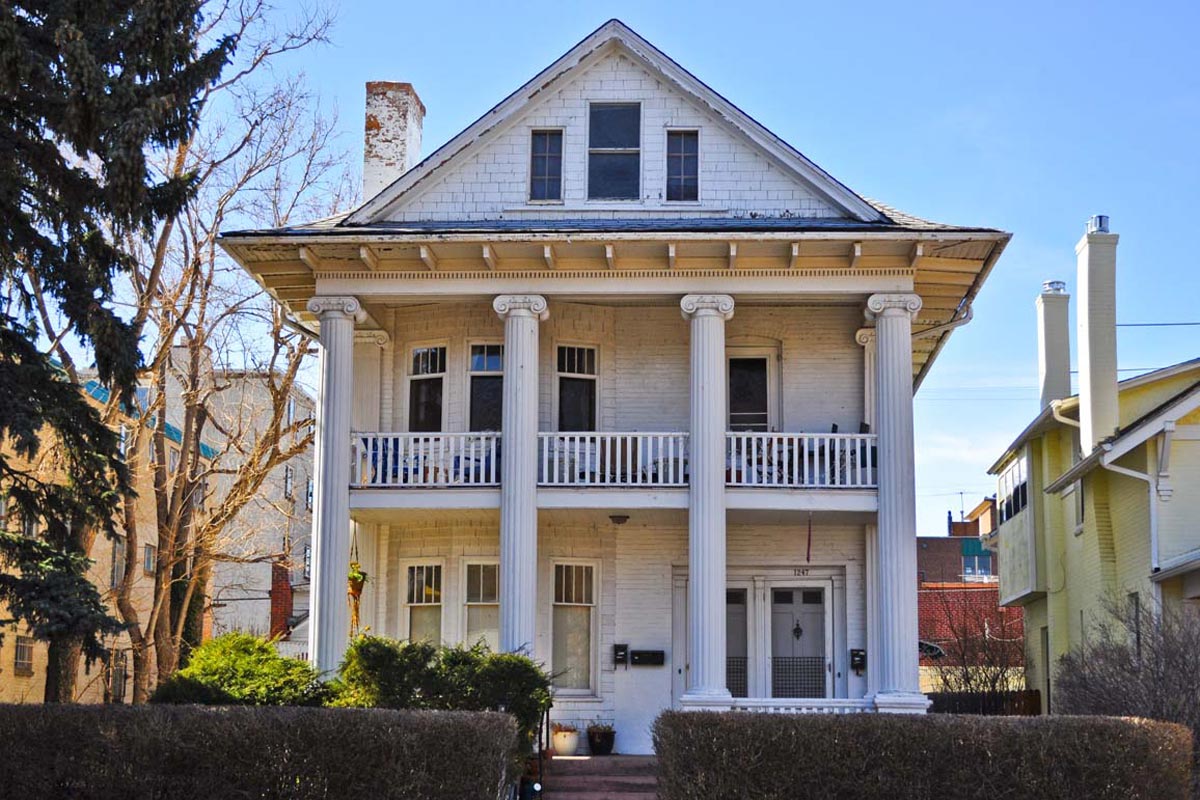 4. Craftsman. Based on the Arts and Crafts movement in England, the Craftsman style was inspired by architects Charles Sumner Greene and Henry Mather Greene and advocated a return to the handcrafted arts. The home features broken eave lines on different levels, and the roof overhang contains exposed rafters with large knee braces. The wide front porch is typical of Craftsman as well as Bungalow style houses. 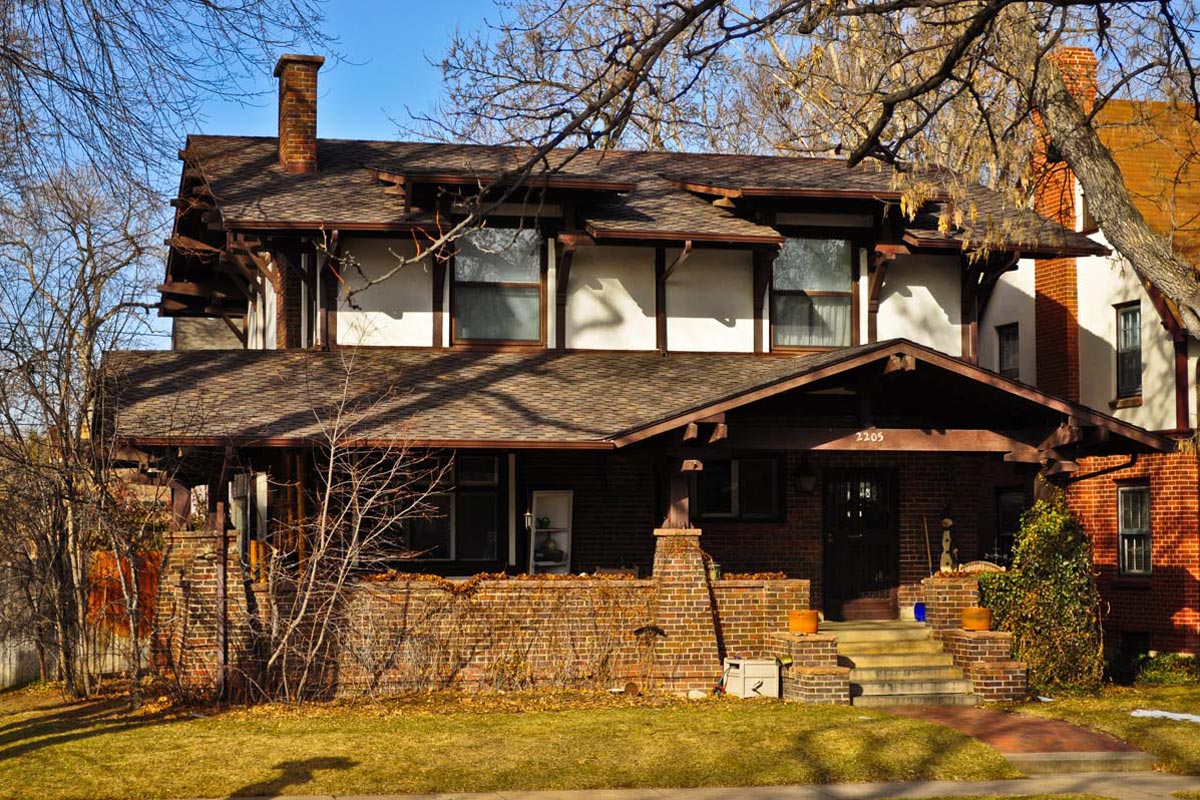 5. Craftsman. The Arts and Crafts style structure was the focus of the design. Typical details are the half-timber detailing over stucco, the heavy brackets supporting the eaves, and the battered or “elephantine” porch columns which narrow from bottom to top. 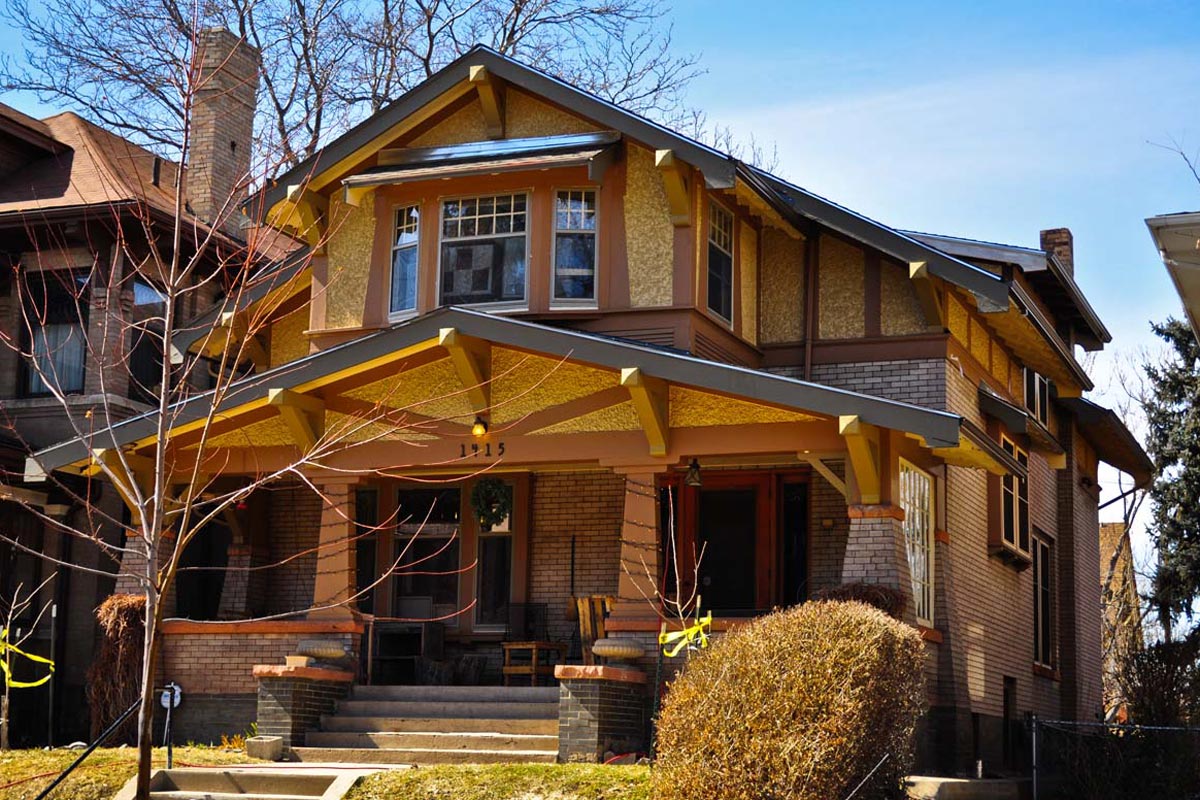 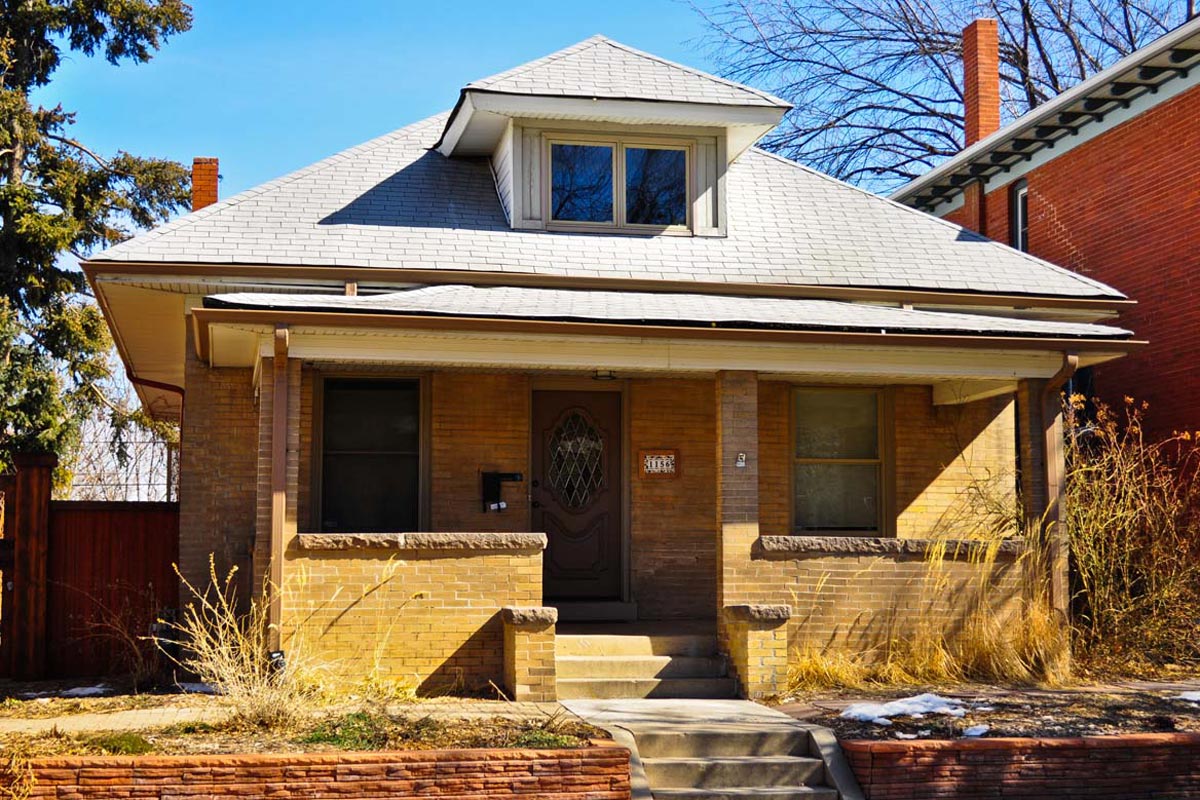 7. Bungalow. Like the previous Bungalow, this early example still features the Classic Cottage central dormer, but has a nearly full front porch with the exposed craftsman style wood structure. 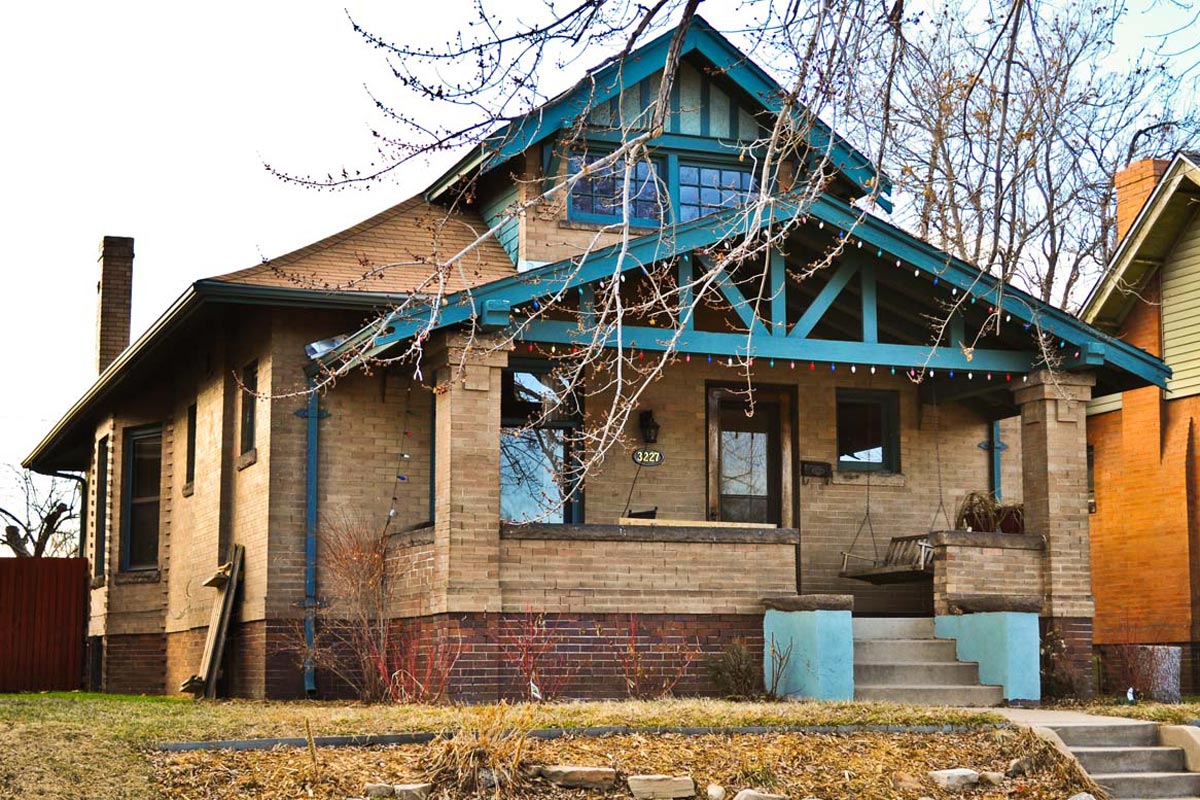 8. Mission Revival. Popularized by A. Page Brown’s California building at the 1893 Chicago Columbian Exposition, this style features low-pitched tile roofs, smooth plastered walls without ornament, deep-set windows, and the distinctive curvilinear parapets. The home has a tile roof porch with classical details such as the Corinthian columns and bracketed eaves. 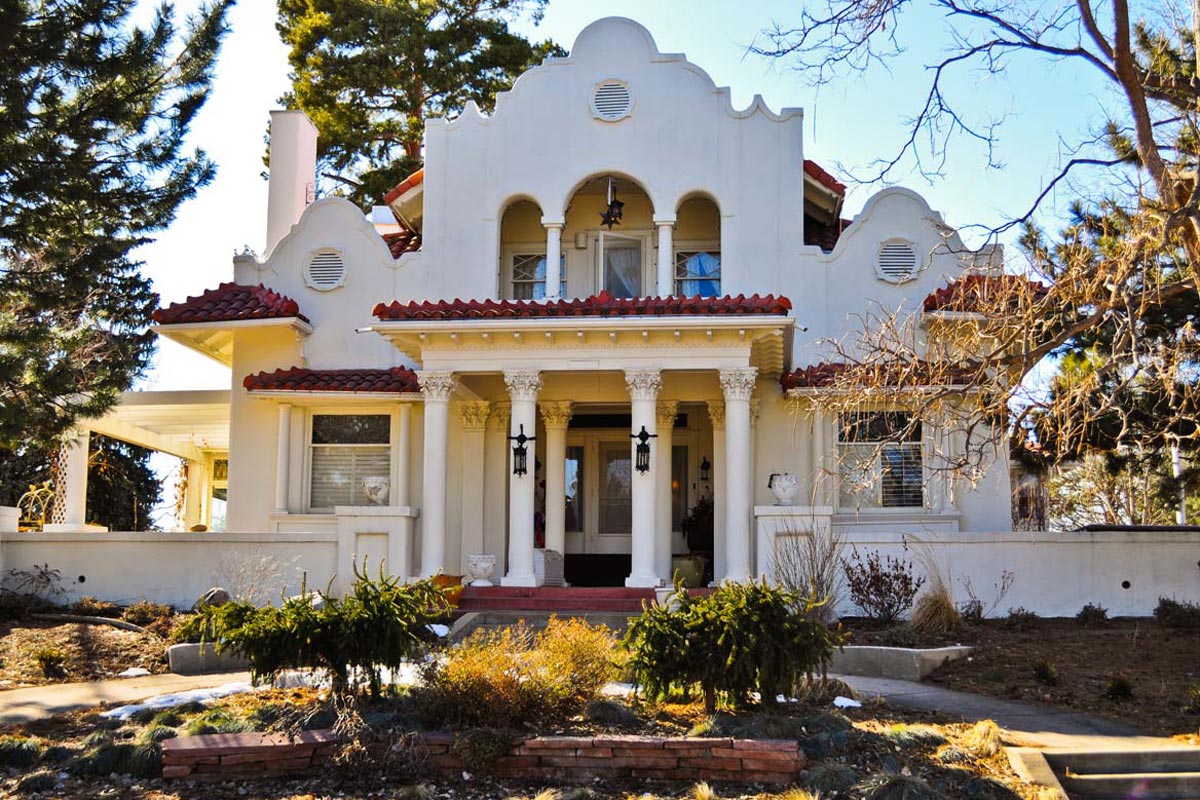 9. TB House. One of the “TB Houses” of Montclair, these homes were designed specifically for sufferers of tuberculosis. They were built with dual unenclosed side or sleeping porches and open floor plans that were thought to be therapeutic. Health care was a major industry by 1900 in Denver as consumptives flocked to Colorado for the high, dry , sunny climate. The house originally had shed roof sleeping porches which have now been enclosed. A hipped roof with central dormer and an entryway which features a broken pediment and pilasters are interesting details.

In case you couldn’t guess, our next post in this series will feature the 1910s. Stay tuned!