Here’s the next installment in our special series exploring Denver’s single-family detached homes by geography and architecture. Today we’ll look at the 1880s.

While there are just a handful of homes remaining from the 1870s, there are quite a few homes from the 1880s still standing in Denver today, around 2,600. Here are two maps that show the location of these homes (click and zoom to view at maximum resolution). This first one shows each parcel with an 1880s-era home on it colored in red along with Denver’s statistical neighborhood boundaries and names. 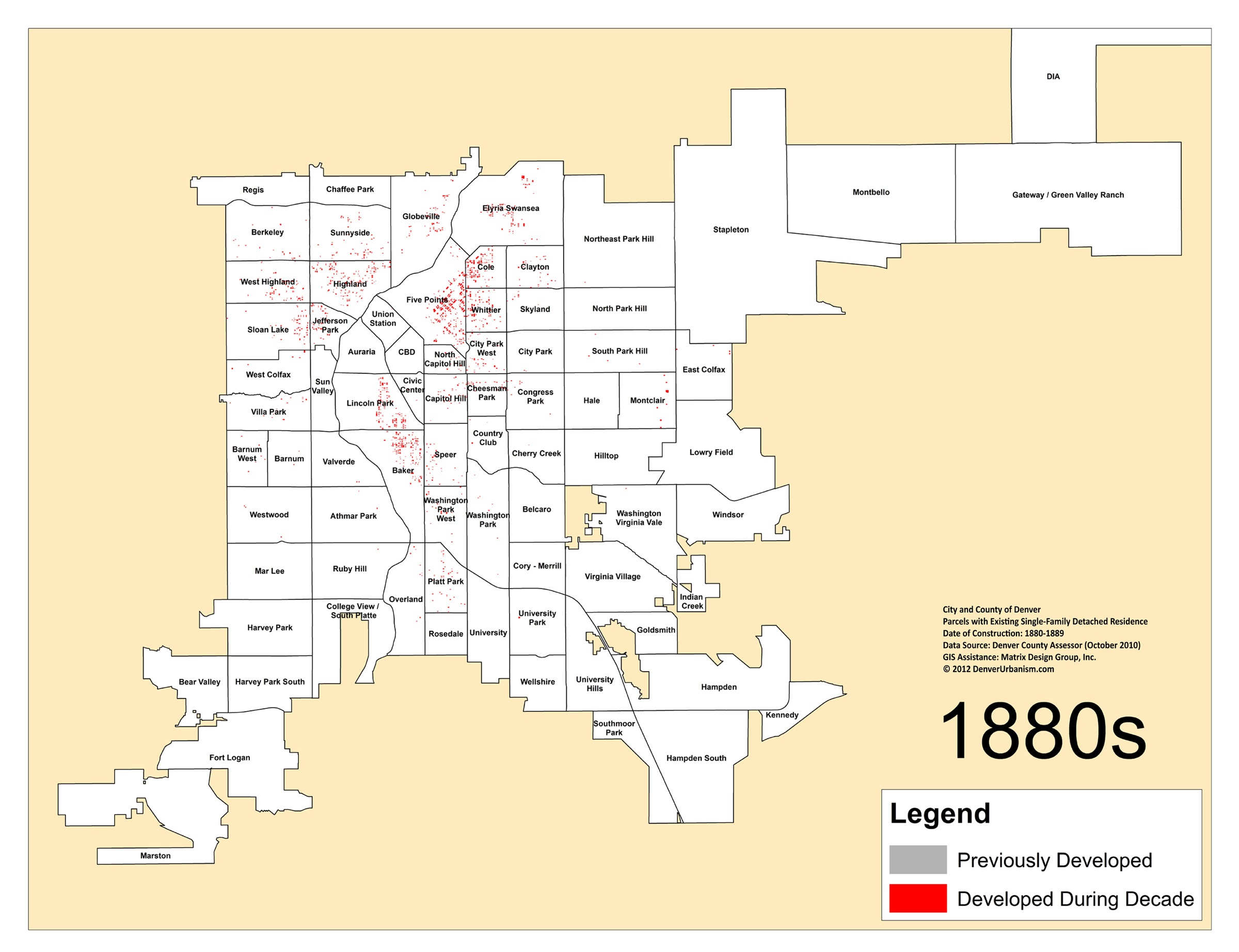 What’s evident from the map is that the greatest concentration of 1880s homes is in Curtis Park/Five Points and spilling over into Cole and Whittier. A few homes are found in Capitol Hill, Cheesman Park, and City Park West, although I suspect originally there were more 1880s homes in Capitol Hill but that many of them were replaced in the mid-Twentieth century by apartment buildings. Another area with a high number of 1880s homes is Lincoln Park and Baker; the crescent shape south of Colfax broadly formed by the Platte River (and its industrial uses) on the west and Cherry Creek on the east is clearly visible. Southeast of Baker, the Speer and Washington Park neighborhoods were just taking off in the 1880s as is evidenced by the scattering of homes there. Likewise for Platt Park.

Highland and the rest of Northwest Denver, as well as Globeville and Elyria-Swansea, also contain quite a few 1880s homes, although they are spread across a much larger area than the relatively compact concentration of 1880s homes in Curtis Park/Five Points. Finally, you’ll note a few homes in the historic Montclair neighborhood far to the east, which was founded during the 1880s as its own municipality but was annexed as part of the consolidation into the City and County of Denver in 1902.

This next image shows these 1880s parcels highlighted on a current Google Earth aerial: 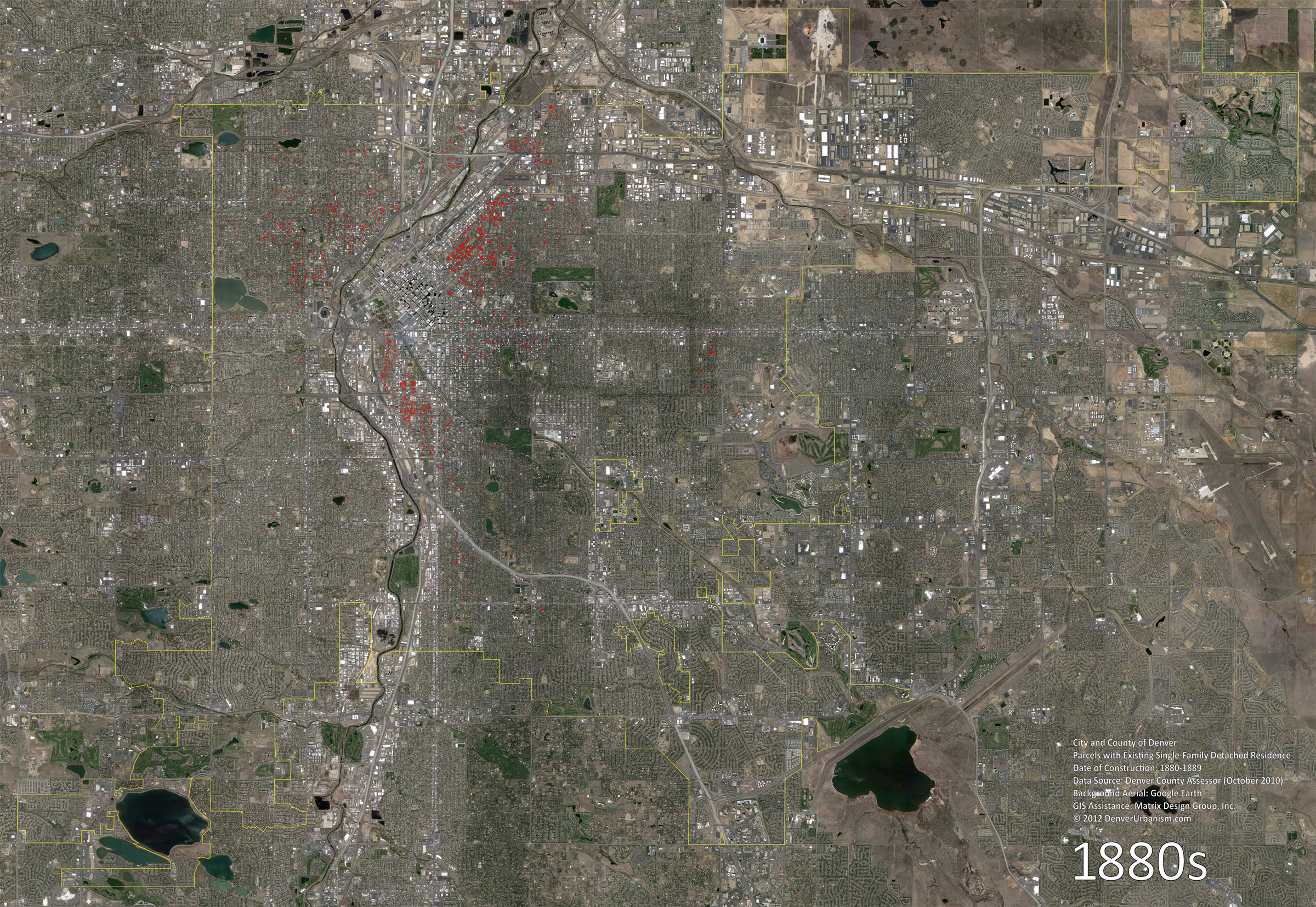 Single-family detached brick housing was the primary residential style in Denver in the 1880s and is still evident today. Good clay, cold winters and fireproof construction ordinances helped create a brick city. Denver homes in the Nineteenth-century typically occupied one or one and a half 25 by 125-foot lots with very small or non-existent side yards. The Victorian styles dominated: Gothic Revival, Second Empire, Italianate, Romanesque, and Queen Anne were at the height of their popularity.

1. Second Empire. Features the distinctive mansard roof – a four-sided gambrel-style hip roof characterized by two slopes on each of its sides and often containing dormer windows. The Second Empire style was largely passé by the mid 1880s. 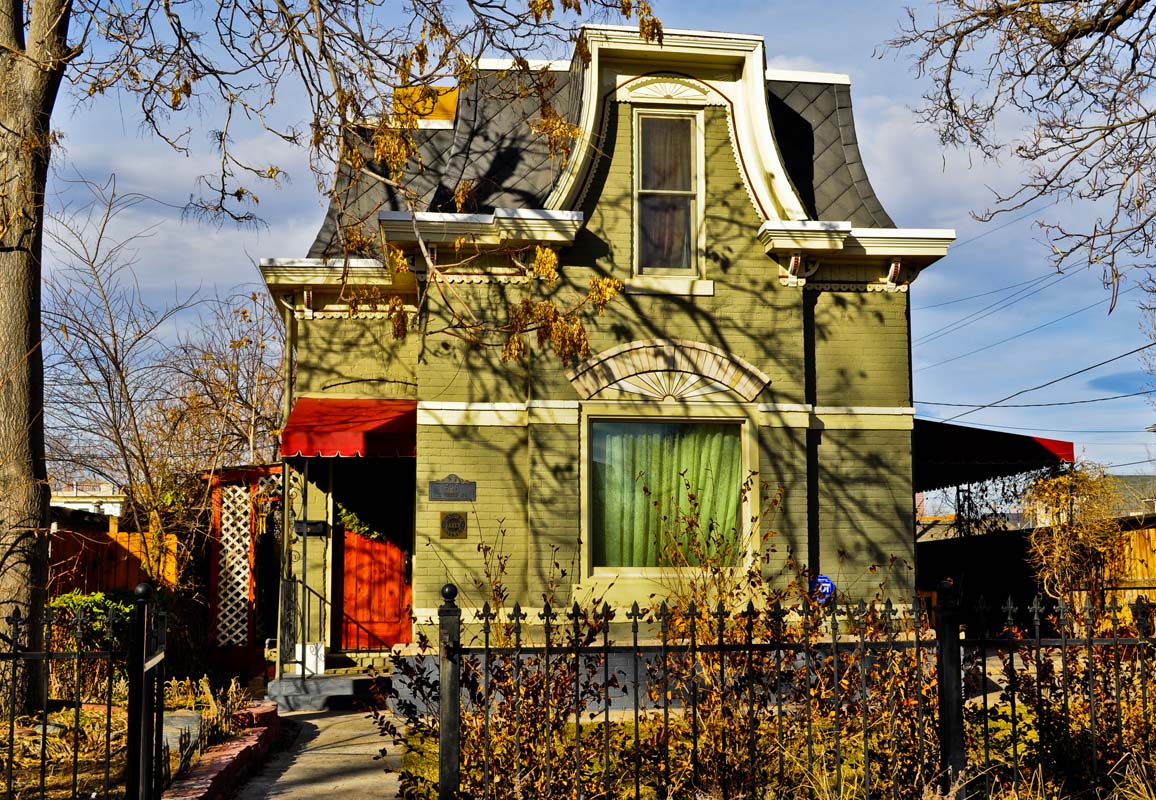 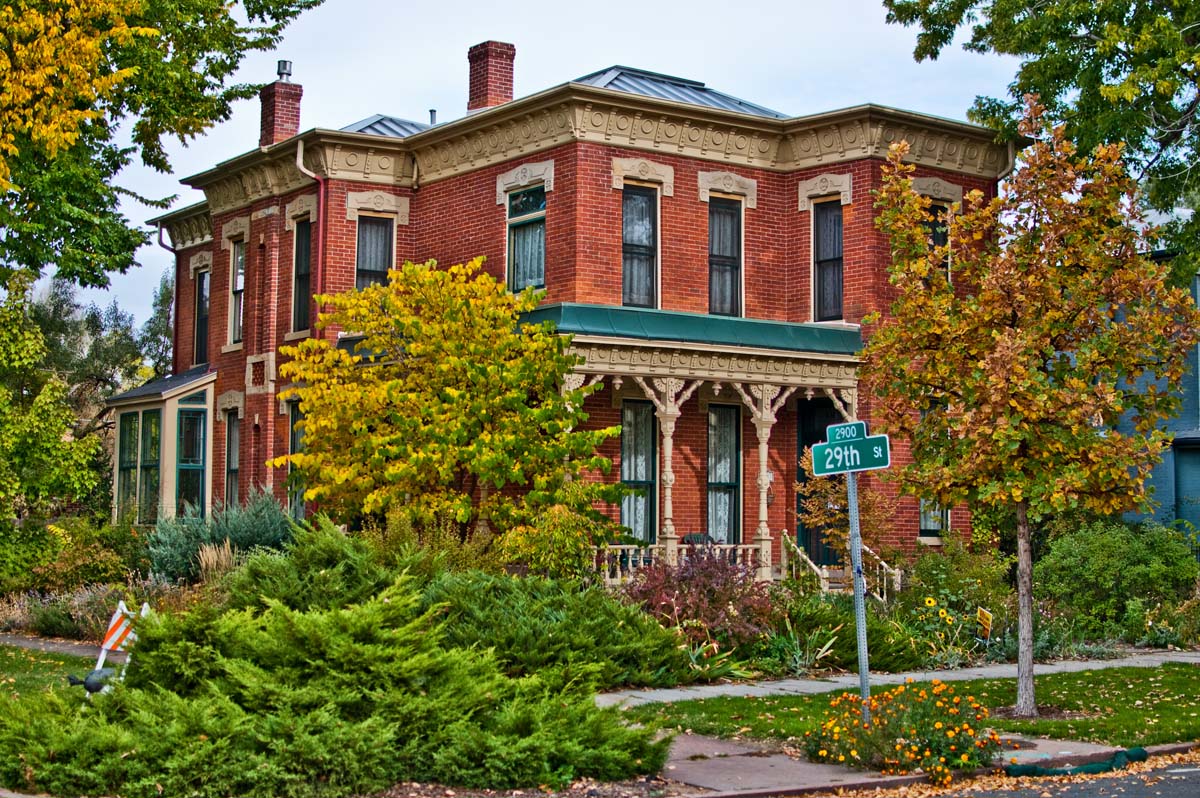 3. Italianate. A trio of homes that were once identical but have since lost their original front porches. Two-story front bays and bracketed cornices with metal cresting are common characteristics. 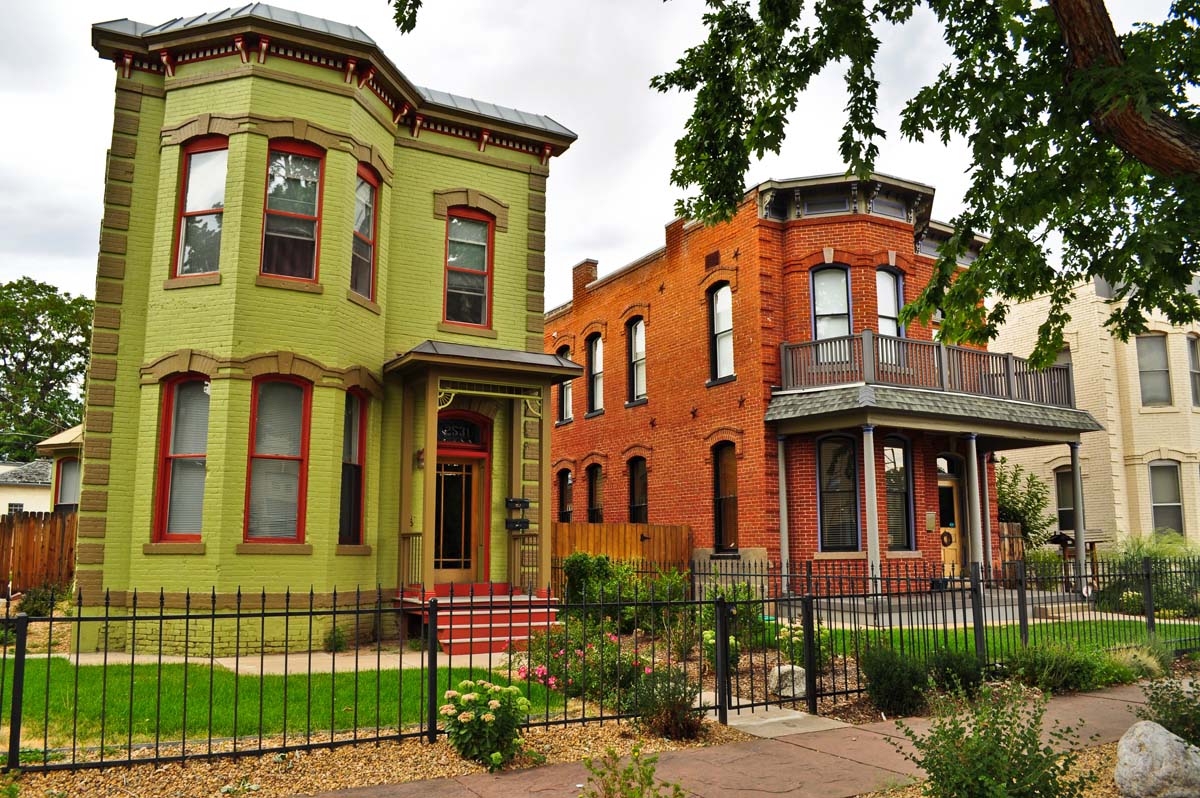 4. Many homes from the Victorian era mixed elements from the various Victorian styles. This one and a half story home appears to have elements from both the Italianate and Queen Anne styles. Features a corner tower turret and hipped roof with a front facing gable. 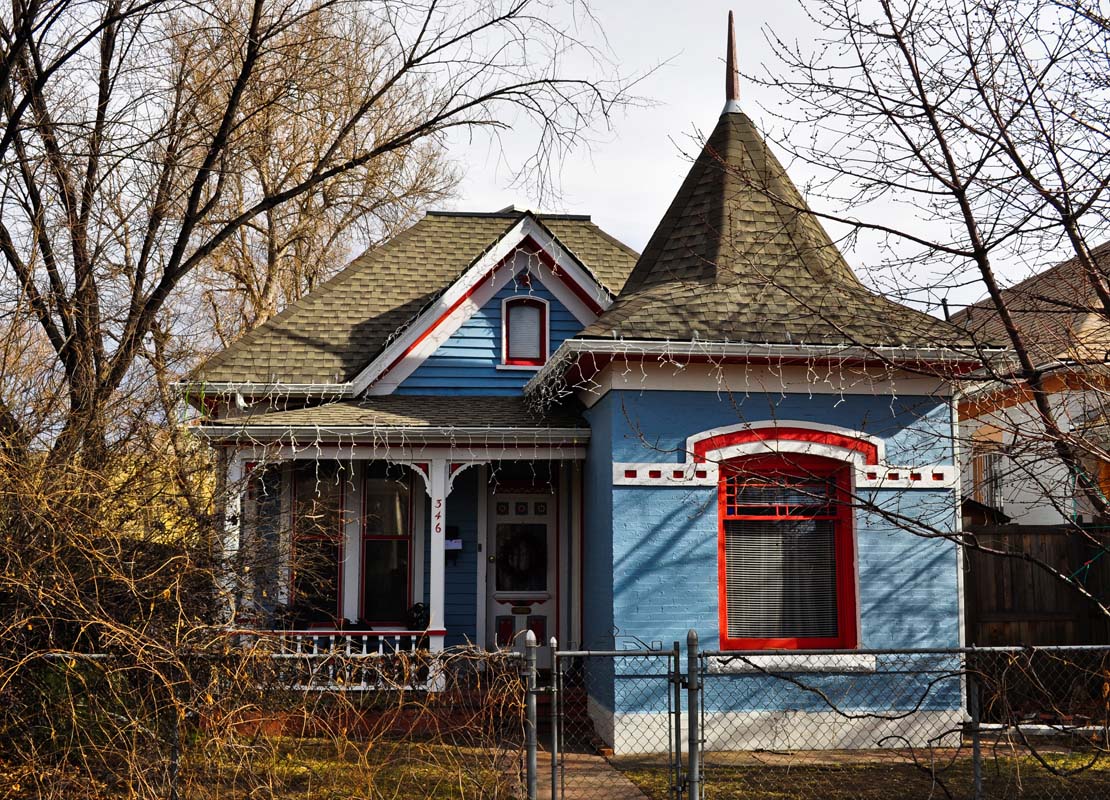 5. Romanesque. Features a rough-faced stone façade with stone columns topped with eggplant finials and a center gable eyebrow window. Stone block radial voussoirs crown the round-arched Romanesque windows. Romanesque ornament usually includes geometric motifs and grotesque animal or human forms and this example contains both: the not so subtle face near the top of the gable and the bead or egg pattern above the second-story windows. 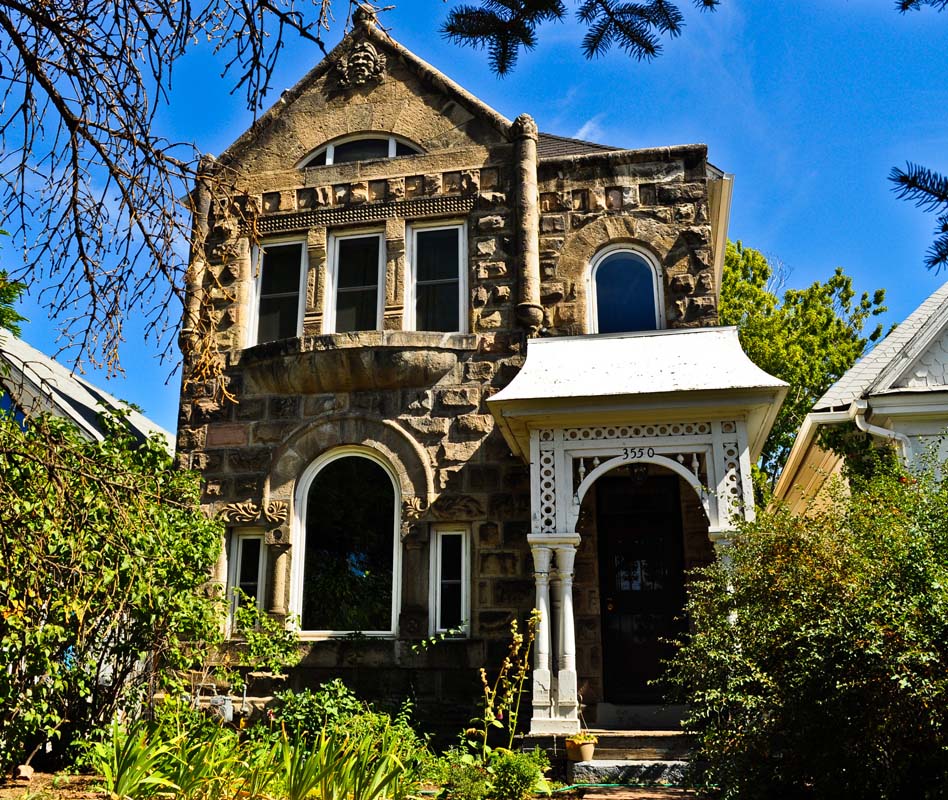 6. Victorian. This house contains mansard elements in the roofline that demonstrate the transition from early Victorian to the subsequent Queen Anne style. The home is symmetrical, with a full-width front porch differing from the asymmetrical Queen Anne style. 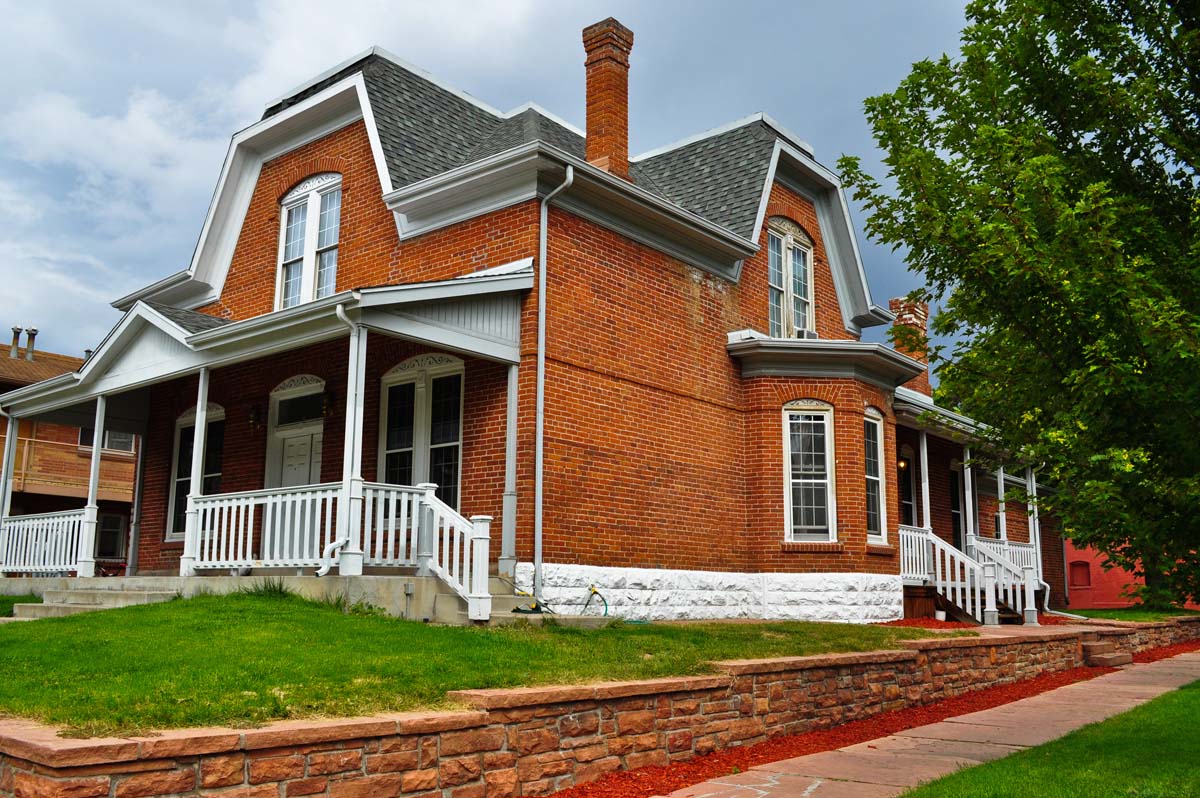 7. Queen Anne. Some of this home’s many features common to the style are its asymmetric shape, front facing gable with fish-scale shingles, the off-set front porch and rusticated stone voussoirs. Vernacular characteristics include the Tuscan columns, the elaborate Tudor style chimney and the Romanesque eyebrow dormer. 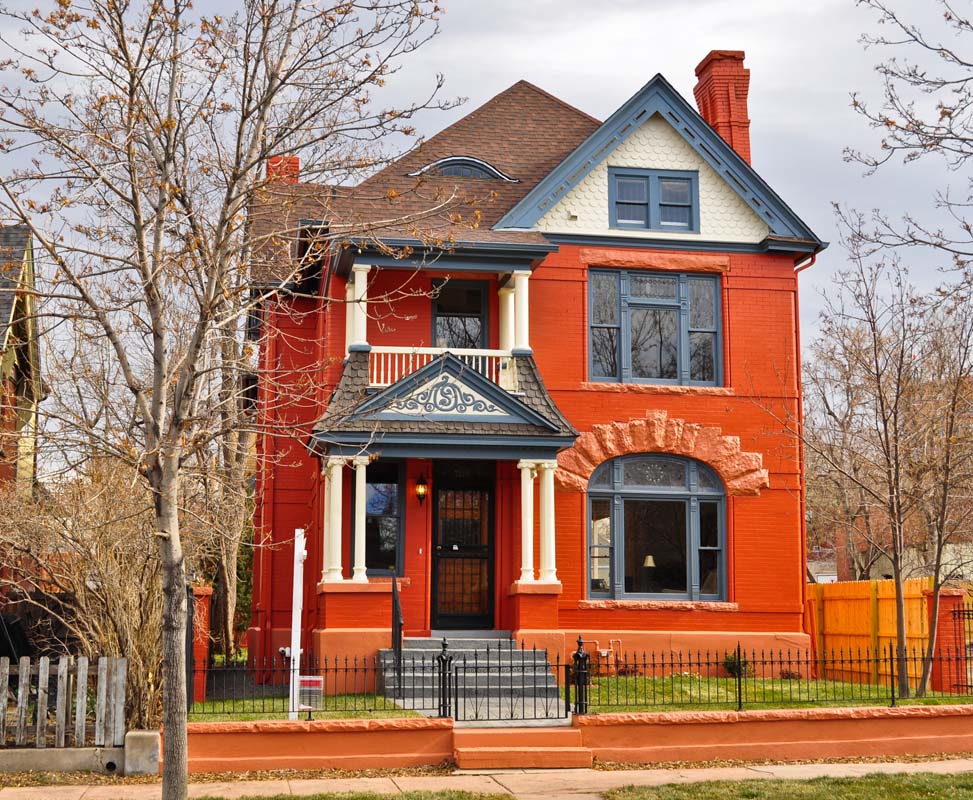 8. Queen Anne. Queen Anne style varies from elaborate “castles” to restrained single-story designs. This home has many common features of the style such as the steeply irregular roof, fish-scale shingles, and the elaborate ornamental porch spindles. Oriel and dormer windows as well as the coffered porch pediment are additional embellishments. 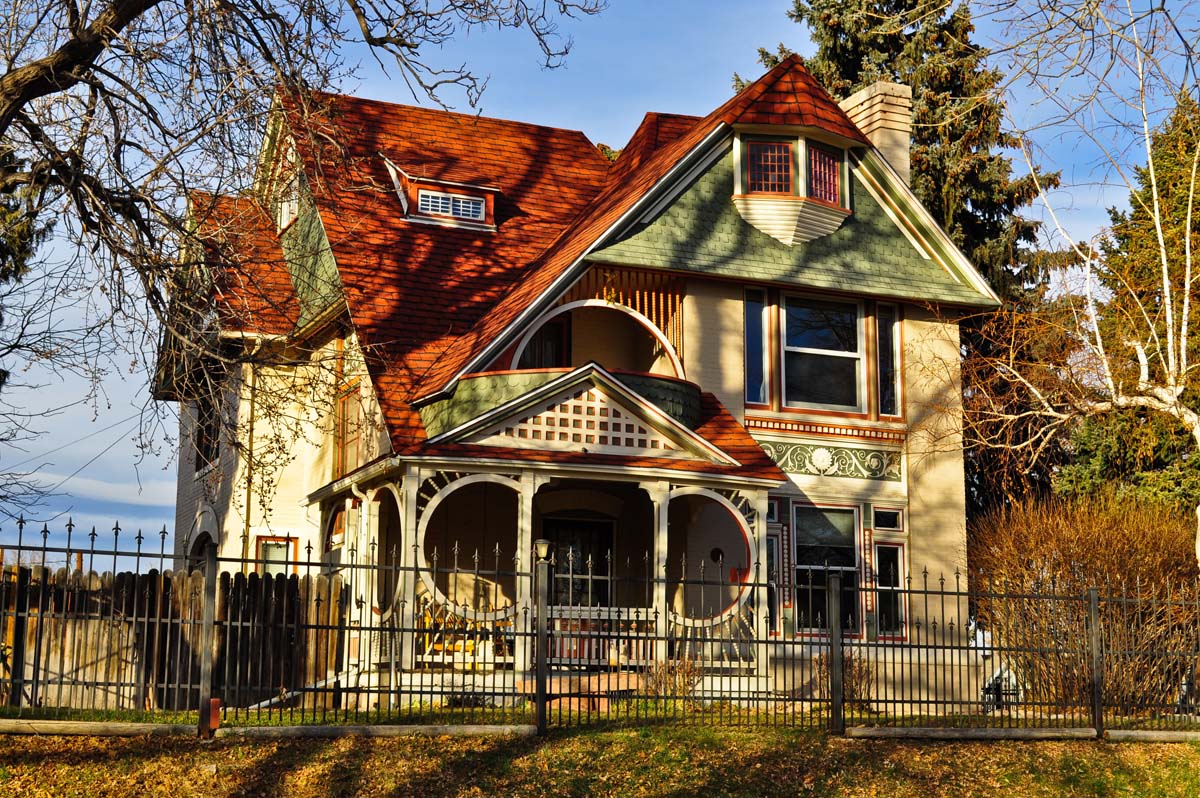