Continuing our series on the geographic and architectural attributes of Denver’s single-family homes, today we have the 1920s… no fooling!

For previous installments in this series, please use the links below: 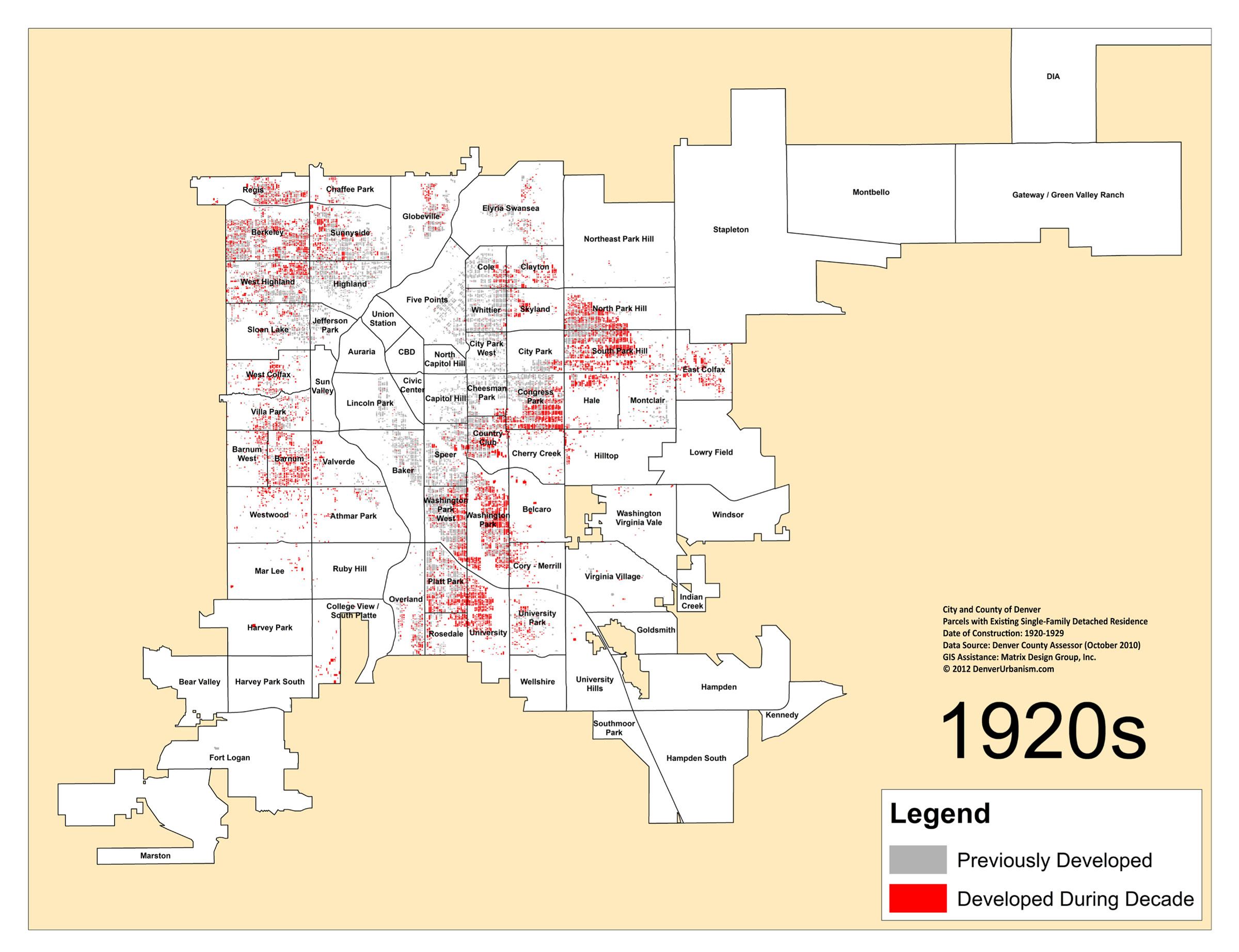 Starting in Northwest Denver, growth in Highland slowed to a trickle as the neighborhood approached build-out. But West Highland, Berkeley, Sunnyside and Regis were still booming. The 1920s also represented the first decade when growth south of West Colfax really took off. The Villa Park, West Colfax, and Barnum/West Barnum neighborhoods experienced significant development, and hundreds of new homes sprang up in new neighborhoods like Valverde, Westwood, and Athmar Park. To the north of Downtown, Globeville and Elyria-Swansea continued their slow-but-steady expansion.

Substantial growth to the east and south of Downtown continued in the 1920s. Development in Park Hill was red-hot, while west of Colorado Boulevard, Congress Park approached its build-out. Near the border with Aurora, the East Colfax neighborhood started growing, while the intensive growth from Park Hill spilled over into Hale. Washington Park West, Washington Park, and Platt Park flourished with new homes, and a big chunk of the University neighborhood was developed during the decade. Overland, Rosedale, and University Park also saw plenty of new home construction.

Here are the 1920s parcels colored in red over a current Google Earth aerial: 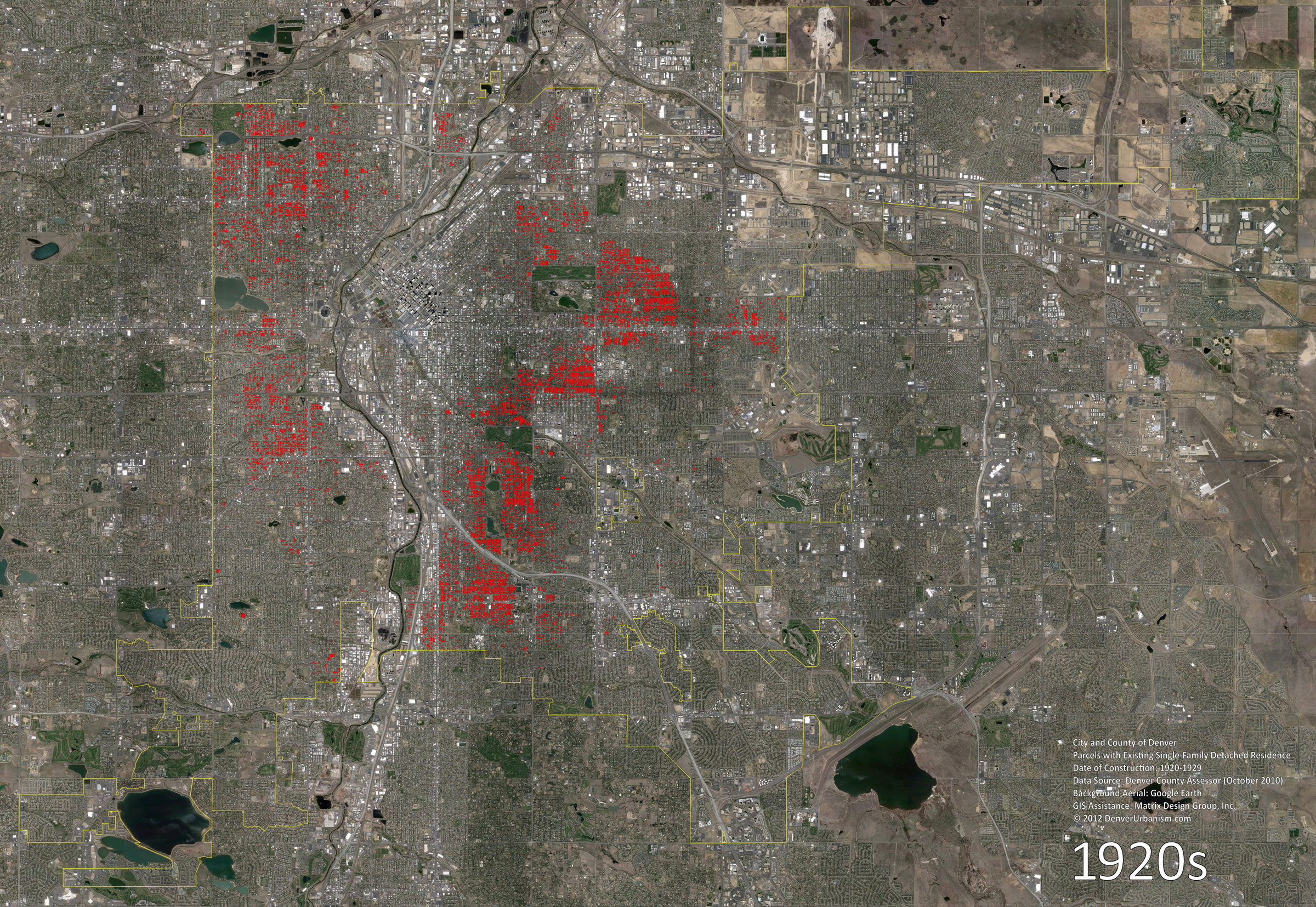 Time for the architecture photos! Mark has a bounty of great images of the home designs that were popular during the 1920s.

Although as popular as ever at the dawn of the decade, by the end of the 1920s, the Bungalow had fallen out of favor. The City Beautiful movement increased awareness of architecture and intensified interest in the revival styles which peaked between World Wars I and II. Subordinate in popularity only to the long-lived Colonial among the various revival styles, the Tudor (along with various other vernacular English-inspired houses) became the local Denver favorite. The Park Hill, Belcaro, Hilltop, Montclair, and Country Club neighborhoods are noted for their English-inspired homes.

1. Craftsman. Two-toned brick with an enclosed porch, this home has multiple gables and roof planes, knee braces, and exposed rafter tails which are all elements of the style. The fish-scale shingling is atypical. (West Highland).

2. Bungalow. The first is a cross-gabled style with a tile roof and gable windows with pent roofs. The darker brick belt course and base matches the perimeter wall (West Highland). The second is built of cobblestone which is rare locally, but a hallmark of the original California Bungalow (Regis). The third is a side-gable type with false-timbering, a shed-roof with a matching shed-roof dormer, and a fully enclosed full-width front porch (West Highland).

3. Tudor. By the late 1920s, small vernacular “low style” English cottages were becoming very popular. A few examples: The first has Jerkinhead gables in a cross-gabled design. It has multiple front-facing gables with the entryway gable featuring flared eaves (Washington Park). The second is a side-gabled type with overlapping front-facing gables with a prominent front chimney. Styling details include patterned brickwork and half-timbering (Skyland). The third is side-gabled with a steeply pitched roof and a dramatic front-facing wall gable. A large chimney dominates the front façade with dual square shafts (Belcaro).

4. Pueblo Revival. The style features flat roofs with parapeted wall above projecting wooden beams—or vigas—that extend through the walls, deep set windows, and a stucco wall surface that is typically earth-toned. Note the canales or rainwater gutters and hewn-wood lintels which are characteristic of the style (Regis).

5. French Eclectic. Steeply-pitched hipped or mansard roofs are characteristic as are gabled roofs combined with towers. Wall cladding can be brick, stone or stucco sometimes with false half-timbering. Doors are usually the simple arched type. The house has arched roof dormers with a center roundel or a round dormer (also called an oculus). The paired chimneys, quoins at the corners, and cornice-line dentils are additional style elements (Country Club).

6. Italian Renaissance Revival. This house has the low-pitched hipped and tiled roof common to the style. The roof usually has a wide overhang with brackets and the windows and doors feature arches above, as demonstrated here. The entryway has a terra-cotta surround with a glass canopy (Cheesman Park).

7. Colonial Revival. This high-style example features corbiestep or stepped gables, a cornice-line balustrade, dentil molding., a two-story side bay and a single-story wing with roof balustrade. The entry portico with curved underside is a favored revival detail, as is the semi-circular fanlight with sidelights (Country Club).

8. Spanish Eclectic. The low-pitched red tile roof, stucco facade, balcony, and the arched doors and windows are typical of the style. The door surround is emphasized by spiral columns, window grilles and a second-story balconette crowned with a cartouche (Country Club).

9. Beaux Arts. This home features a low-pitched hipped roof common to the sub-type, based on Italian or northern European Renaissance models. The arched windows, carved floral patterns, and baroque detailing are typical of the style (Cheesman Park).

10. In the 1920, architects concerned with a lack of diversity of design formed the Denver chapter of the Architects’ Small House Service Bureau. Their goal was to provide those of moderate means access to superior designs. These homes were compact, comfortable, and economical. Roofs were kept to simple forms. They contained no meaningless or elaborate ornamentation, and often included arbors, kitchen gardens, walkways, and low walls with flower beds, thereby providing the working class with “no frills” designs that were both aesthetic and functional. The 1922 book featuring available styles provided by the Small House Bureau’s Mountain Division included, among others: Spanish, Italian, Colonial, English Cottage, French Country, Mission, Swiss Chalet, and Dutch Colonial. The following is a sample of some of these styles found in Denver: