The Importance of Bridges in Bicycle and Pedestrian Networks

Currently, both the 15th Street bridge and the approach to the 20th Street Bridge between Highlands and Downtown Denver on the Highlands side are under construction. Both reconstruction efforts are part of CDOT’s continued work on I-25 which is being widened through this section of Downtown Denver to provide more capacity for automobiles. The reconstructed bridges will result in an attractive pedestrian walkway and better bicycle facilities along Central Street in the Highlands overlooking the highway. However, lacking from both these projects are significant improvements for bicycle access across the bridges. Details on the CDOT project can be found here.

Part of the reasoning for the lack of improvements is that people on bicycles should be using the series of bridges along 16th Street to access Downtown. This reasoning misses a key point. Bridges, by their nature, are pinch points that must accomodate multiple modes of transportation because all users have no choice but to funnel onto the bridge to cross what ever obstacle the bridge is crossing, be it a river, highway or railroad tracks.

The red x’s on the map above show problematic spots for bicycle access between Highlands and Downtown Denver  including the narrow bridge at 15th Street, the on-ramp and off-ramps of I-25 at 20th Street and the Millennium Bridge, which lacks bicycle ramp access. 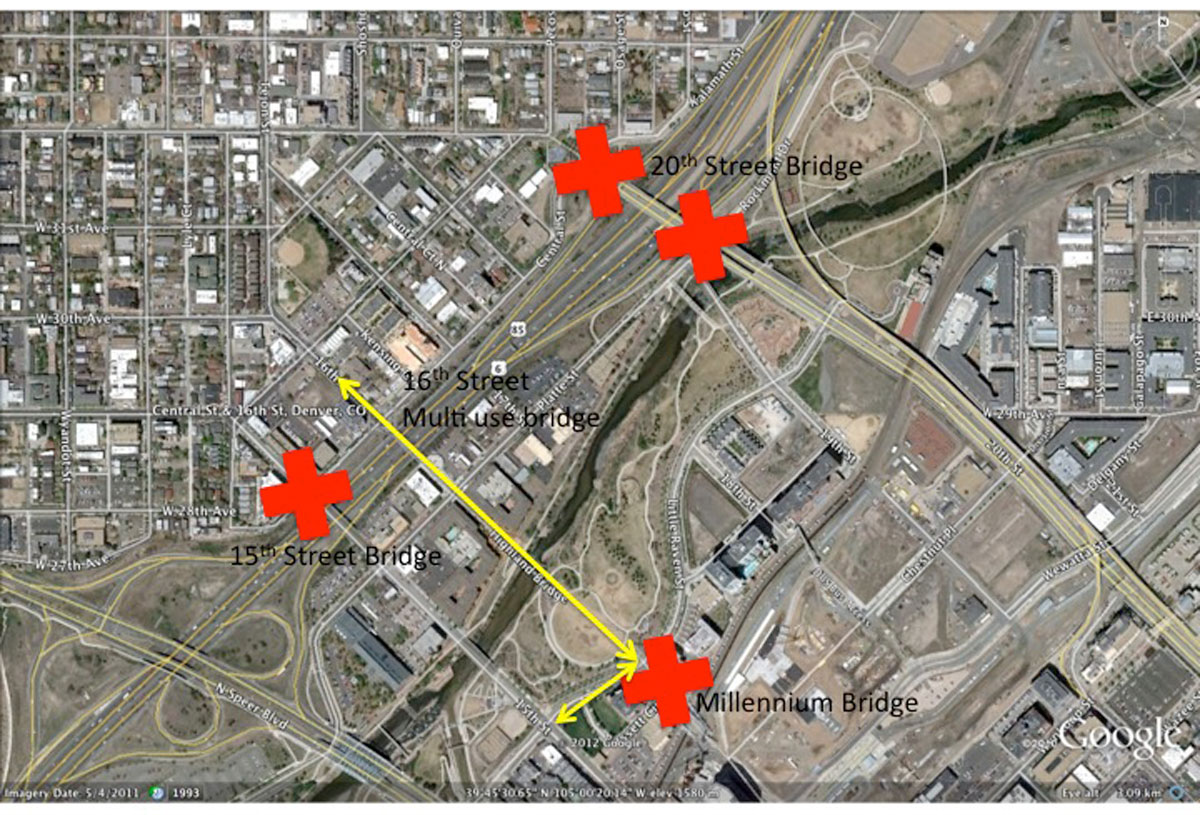 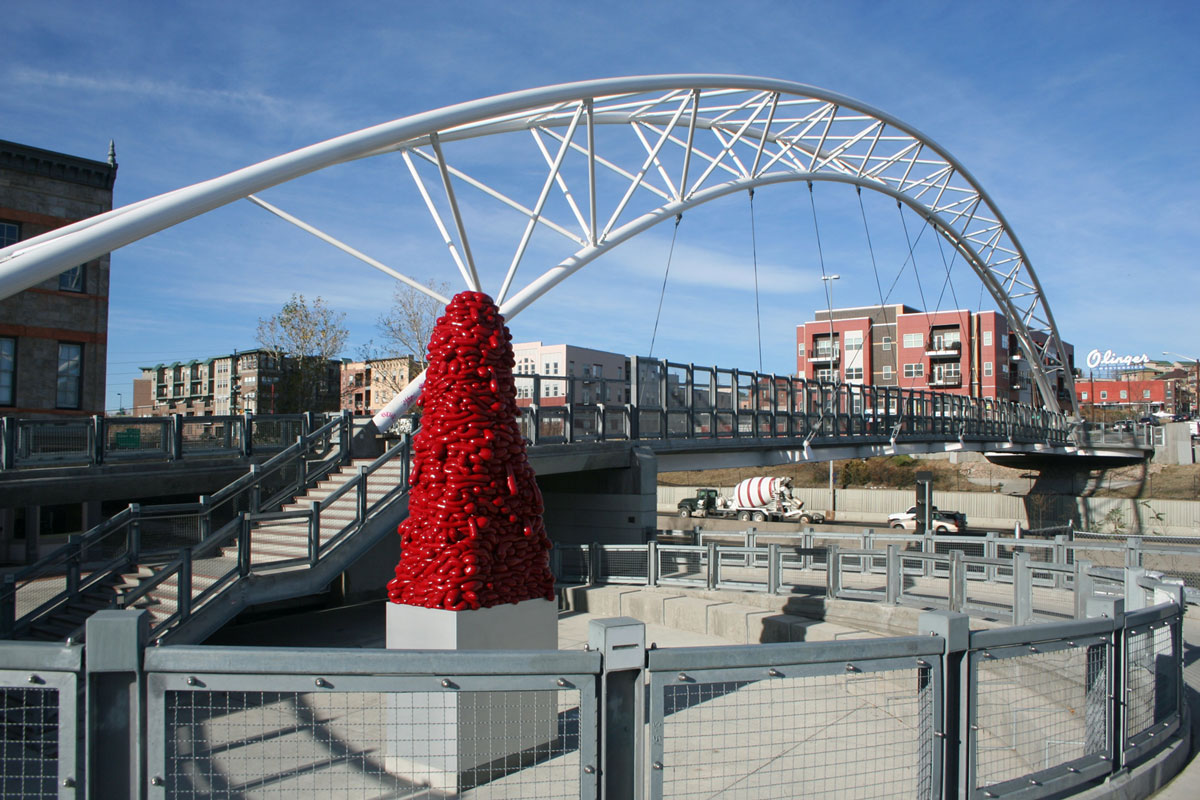 The multi-use Highland Bridge works well for crossing the highway, but because the corresponding link into downtown, the Millennium bridge, lacks a ramp, it’s impractical for people on bicycle to use 16th the entire way between Highlands and LoDo. This situation, therefore, funnels people on bicycles onto 15th Street or 20th Street, both of which are problematic for entering and exiting Downtown because of roadway designs that did not take into account bicycle access. Now, as major work is done to both bridges, CDOT and the City of Denver are missing a huge opportunity to begin the process of correcting existing poor designs. The result will be the same mix of bikes and pedestrians on the crowded multi-use Highland Bridge while only the most ardent cyclist warriors will feel secure taking the most direct route into Downtown on 15th or 20th. If the city is going to reduce the conflict between people walking, people bicycling, and people in automobiles while growing the number of people commuting on bicycles, then they will need to start building more separated on-street facilities for bicycle use. These types of facilities have been shown to increase safety for all types of users: bikes, peds and automobiles.

The city’s failure to appropriately address bicycle access on 15th Street and 20th Street into the Highlands is unfortunate, but at least it can be said that these projects were designed prior to the city’s and state’s new commitment to multi-modal transportation. Denver, however, is full of bridges, and the city should not miss another opportunity to ensure that future bridge construction and reconstruction is done with a true commitment to multi-modal access. Of particular note in this regard is the W. 23rd Avenue bridge going into Jefferson Park, which may be due for reconstruction in the not too distant future, the W. 38th Avenue underpass, which is a frightening ride for even the most advanced cyclist, and the Colorado Station bridge pictured below, which, if built as currently designed, will provide much needed north/south access across I-25 for people walking and biking east of Colorado Boulevard. As of this writing, Denver Public Works is considering the final design for this bridge. Bike Denver and the Mayor’s Bicycle Advisory Committee have both taken the position that the currently approved design of the bridge, with ramp access for people on bicycles, is the best design for the Colorado Station bridge. Hopefully, Denver Public Works will move forward with the current multi-modal design of this important north/south connecting bridge. 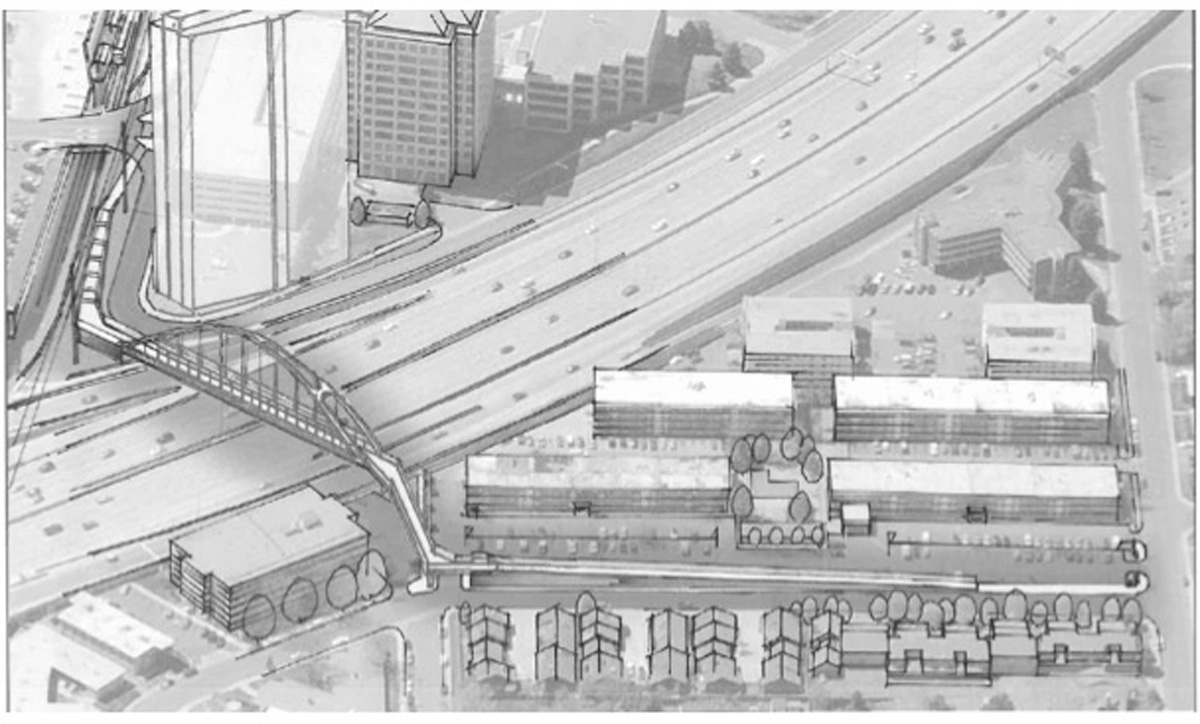