This is the first of a 15-part exploration of the geography and architecture of Denver’s roughly 129,000 single-family detached homes—one decade at a time.

Understanding the manner in which cities grow and evolve over time is a topic of great interest to me. One idea I’ve had in mind for many years was to visualize Denver’s geographic growth over the decades while simultaneously visualizing the prevalent architectural design and building forms that constituted that growth. With the help of the excellent GIS department at Matrix Design Group, about a year ago I put together this “Denver’s Single-Family Homes by Decade” research project, a small part of which I’m sharing here with DenverUrbanism readers.

The Denver Assessor’s office maintains a database containing information on the approximately 171,000 discrete real estate parcels within the City and County of Denver. This information can be accessed by anyone through the Assessor’s website or the entire parcel database can be obtained from the city. Using the full database as of October 2010, I queried the “Year Built” field (which reports the year a structure on a parcel was constructed) for only single-family detached residential properties, and aggregated the data by decade. Then, with the assistance of the Matrix GIS team, I developed the maps that will be presented in this blog series. An important thing to remember is that these data represent the single-family detached homes built in each decade that are still standing (as of October 2010), and not all the homes that were originally built during the decade.

To incorporate the architectural component, I recruited Mark Zakrzewski to collaborate with me on this project. Mark is a long-time Downtown Denver resident who is not only an urban enthusiast and a fan of architecture and Denver history, but he’s also a passionate amateur photographer; the camera allowing Mark to combine his love for all things urban through a single medium. In each post, Mark will feature photos of representative homes from the decade and descriptions of their architectural styles and features.

So let’s get started:

Denver was founded in 1858, but no single-family detached residential structures (per the Assessor) that were built in the 1850s or 1860s remain standing. That brings us to the 1870s, where there are 25 residences in the city that are still with us today that were constructed during that decade. Viewing only 25 highlighted parcels at a city-wide scale becomes nearly impossible, so for this decade only, the maps will be different than the rest of the decades to come. Below, using GoogleEarth and my parcel data in KML format, I’ve zoomed in on the areas north and south of Downtown Denver. The 1870s parcels are colored in red (click to embiggen): 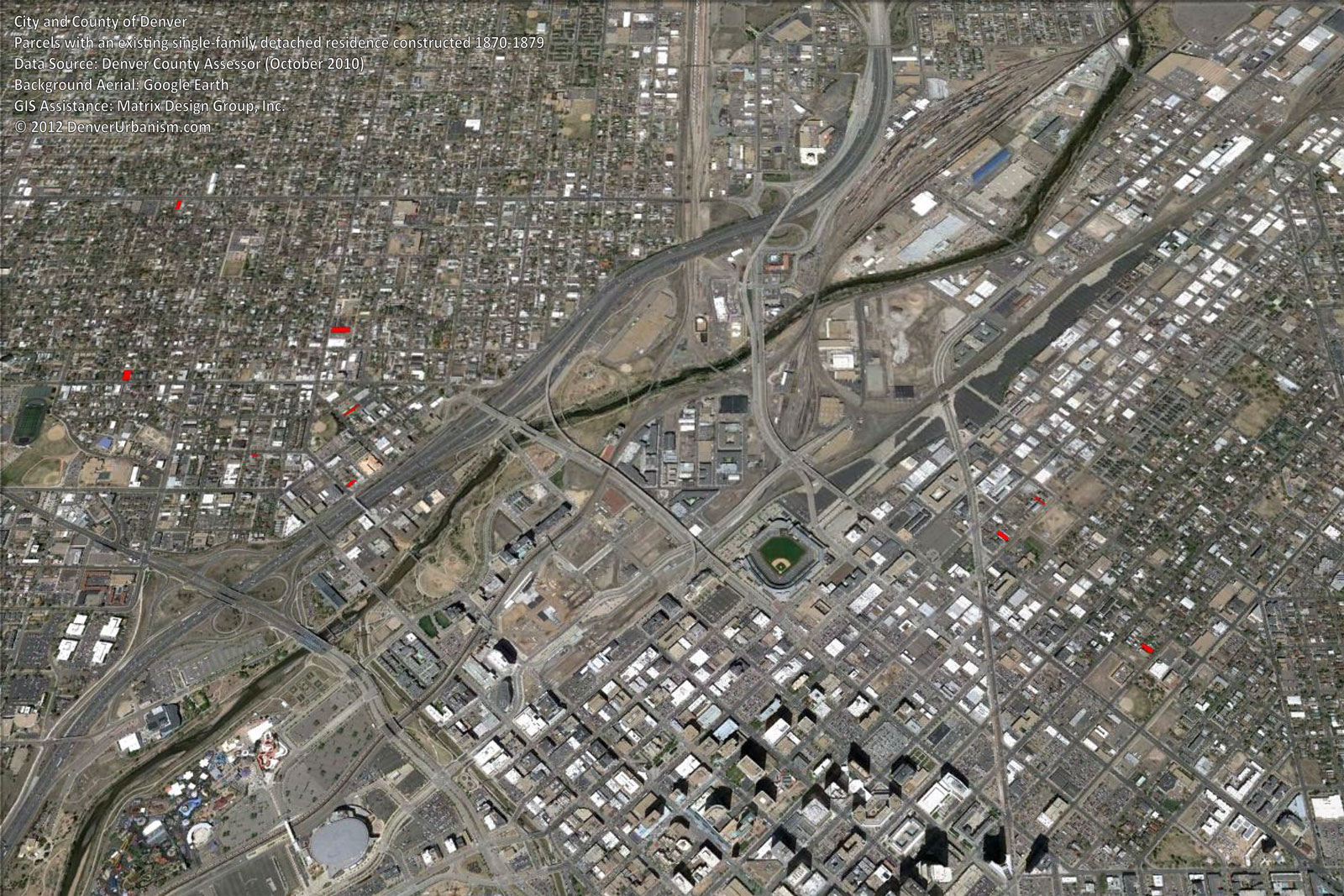 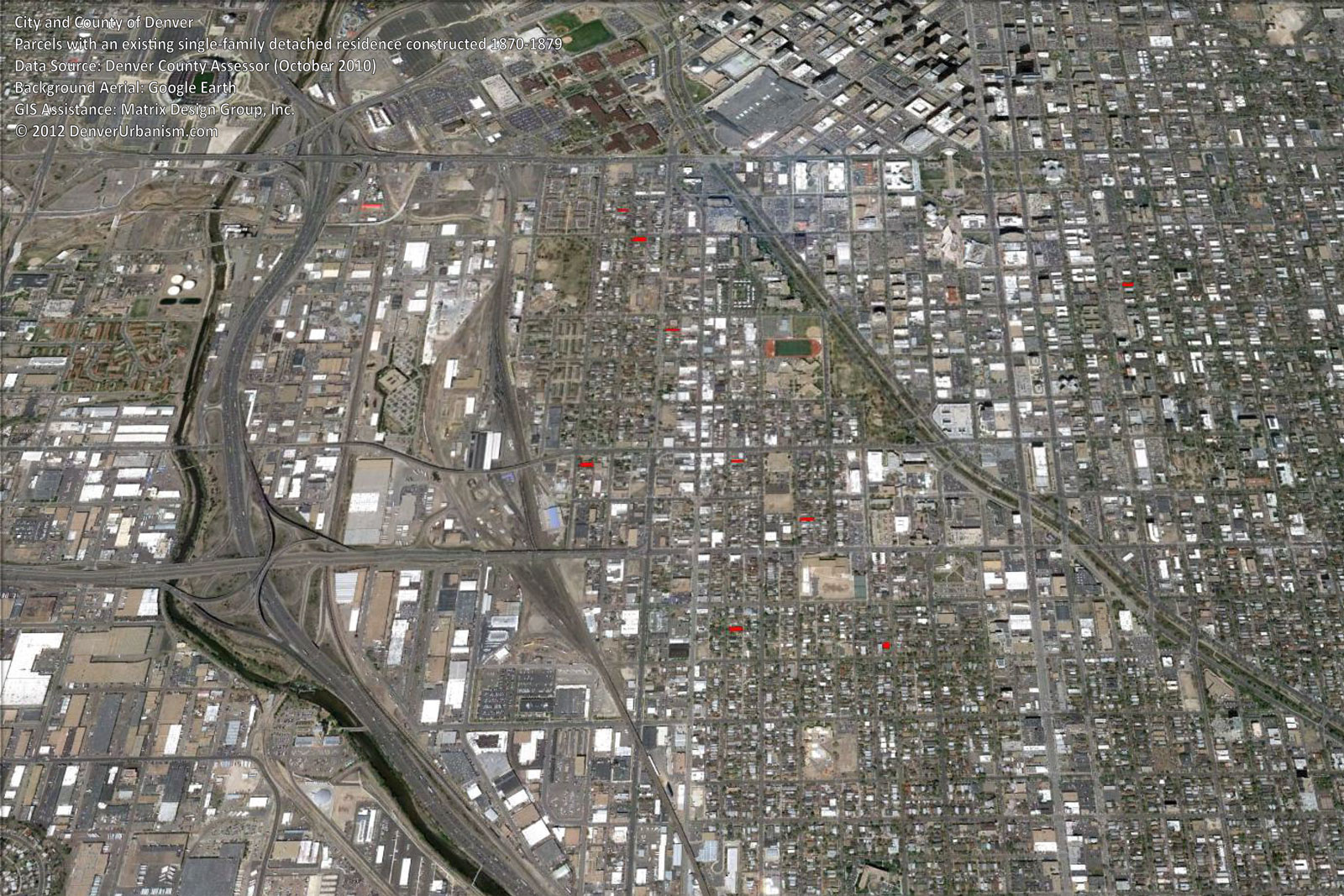 Now for Mark’s contribution. Here are eight of the homes built in the 1870s, according to the Denver Assessor’s office:

The majority of 1870s single-family residential structures in Denver were built without the services of an architect and many lacked a definable style. Most homes were constructed of wood in a frame vernacular style that reflected Denver’s boomtown, gold-rush roots. Building permits weren’t required until 1889, and heights, manner of construction, and class of building weren’t regulated until 1904.

1. Early Vernacular Cottage. The curious pediments above the front windows are faithful re-creations of the originals while the turned wooden porch posts in the Queen Anne style were most likely added in a later restoration. 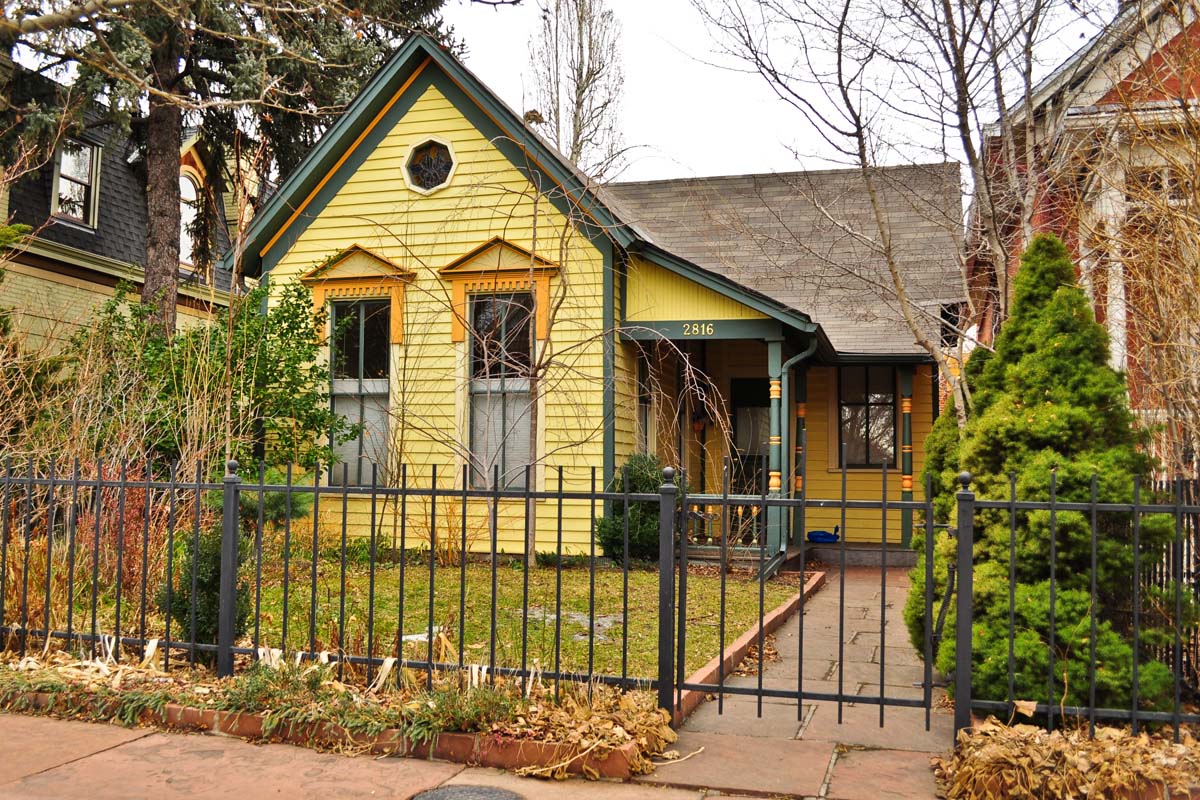 2. Frame Vernacular. This home is a surviving territorial house located in the San Rafael Historic District. A “territorial” house is one built prior to Colorado’s 1876 statehood. Wood frame construction was subsequently banned in Denver. 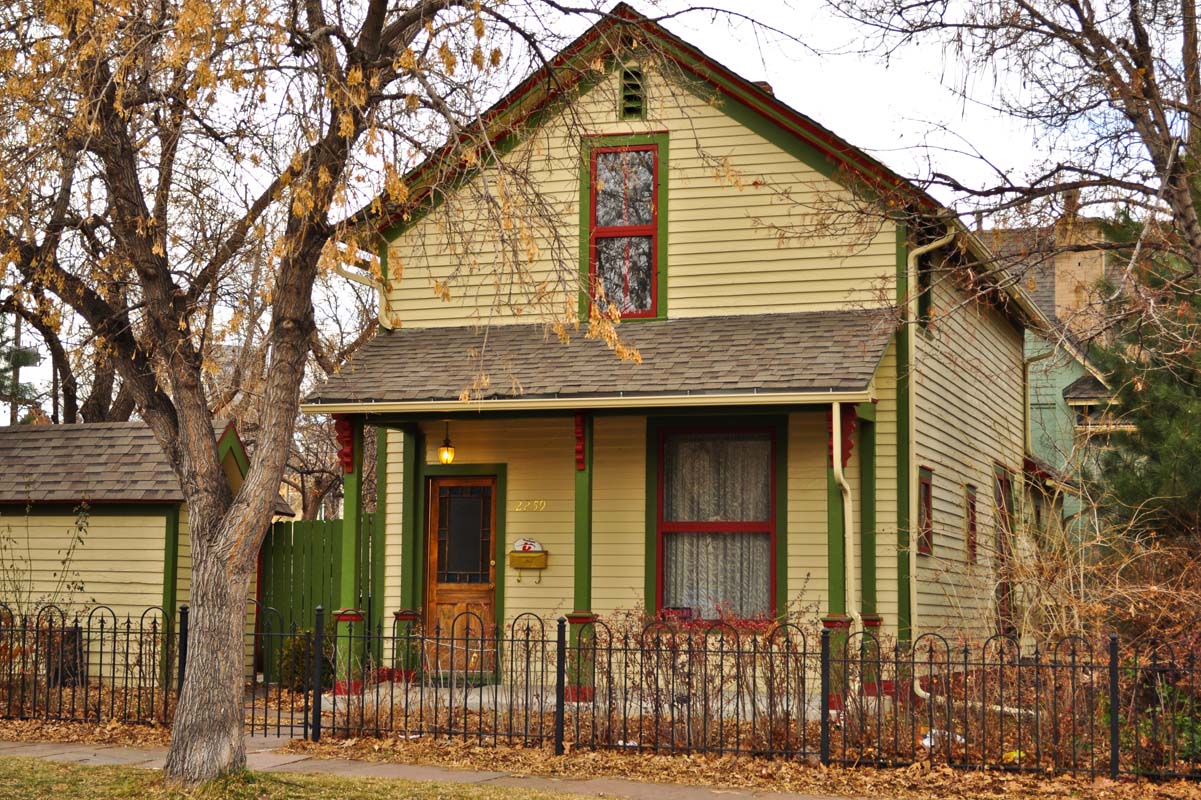 3. Italianate. A rather unique brick one-story with side bay that features a bracketed cornice with dentil molding. The hipped roof is highlighted by a protruding dormer window. 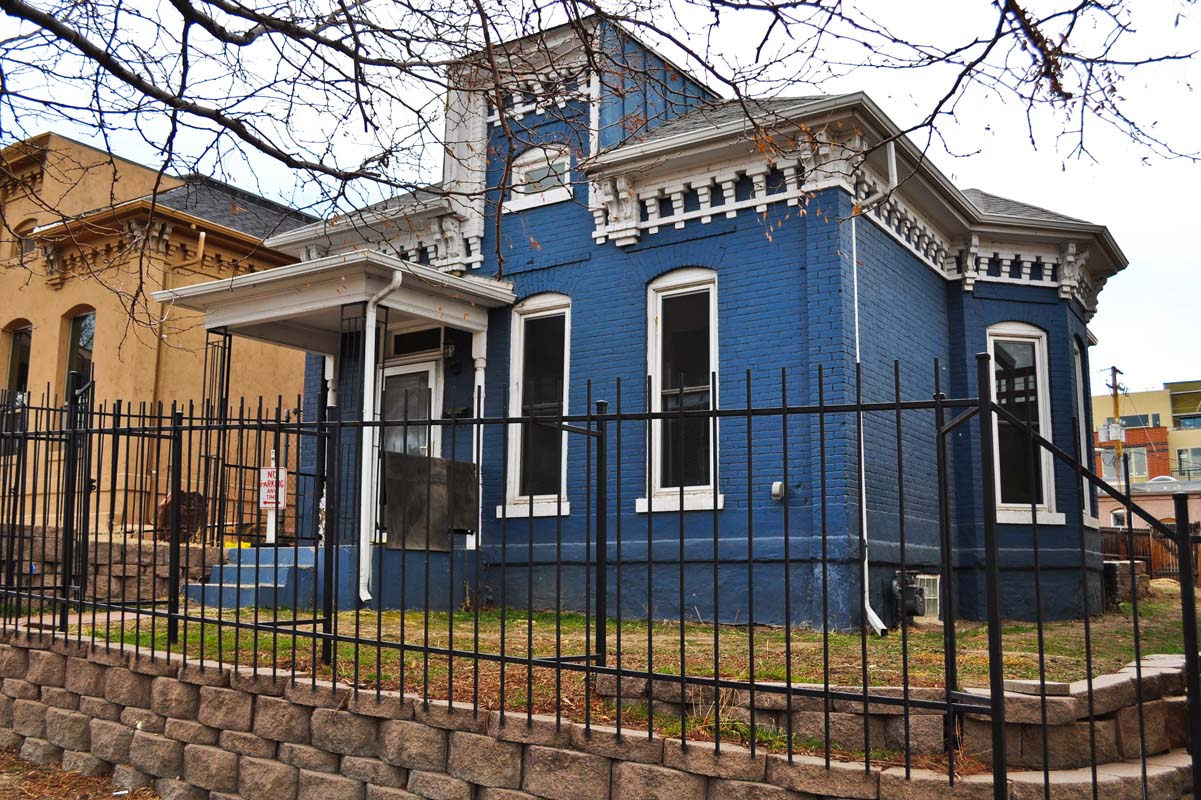 4. Italianate. Constructed of red brick with a bracketed cornice and a two -story side bay and featuring a transom window over the front door displaying the home’s historic address. 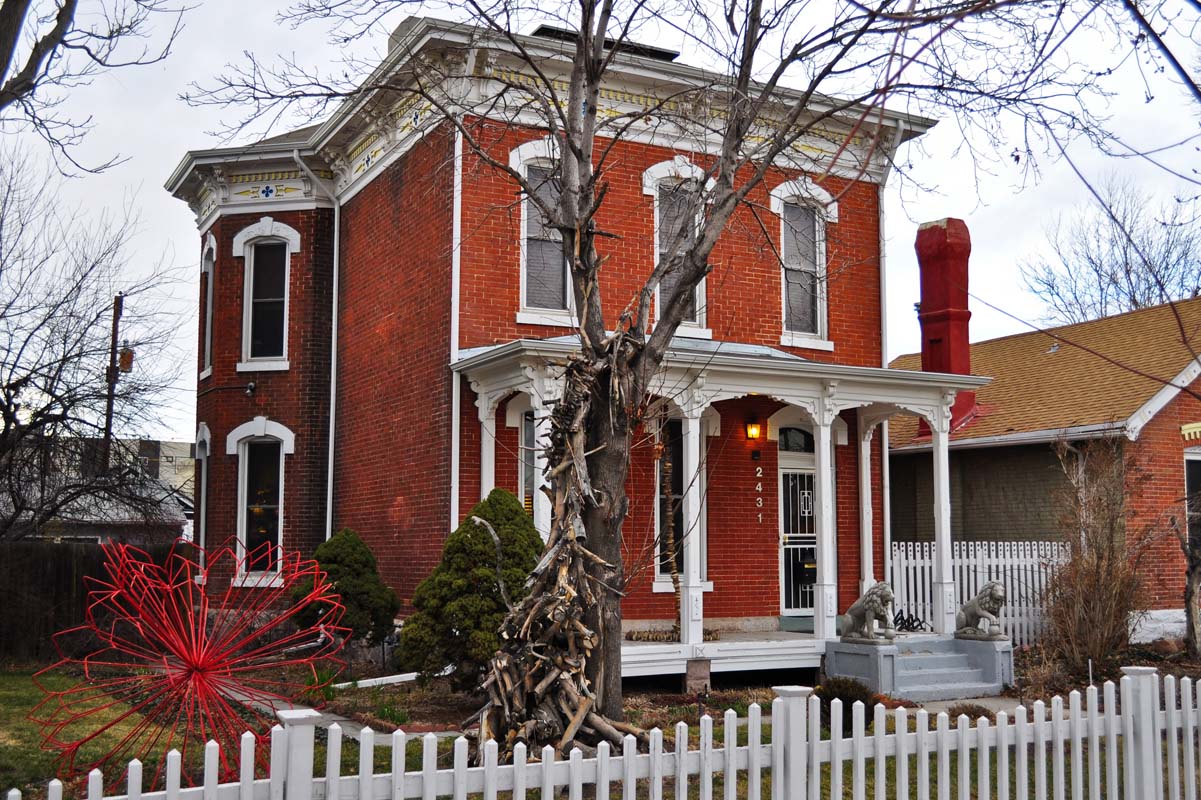 5. Frame Vernacular. Denver’s version of the “Shotgun Shack” found across the American south. Originally wood frame construction, this house and its next door neighbor have been redone in stucco, a trend I’ve seen with a number of oldest wood frame houses. 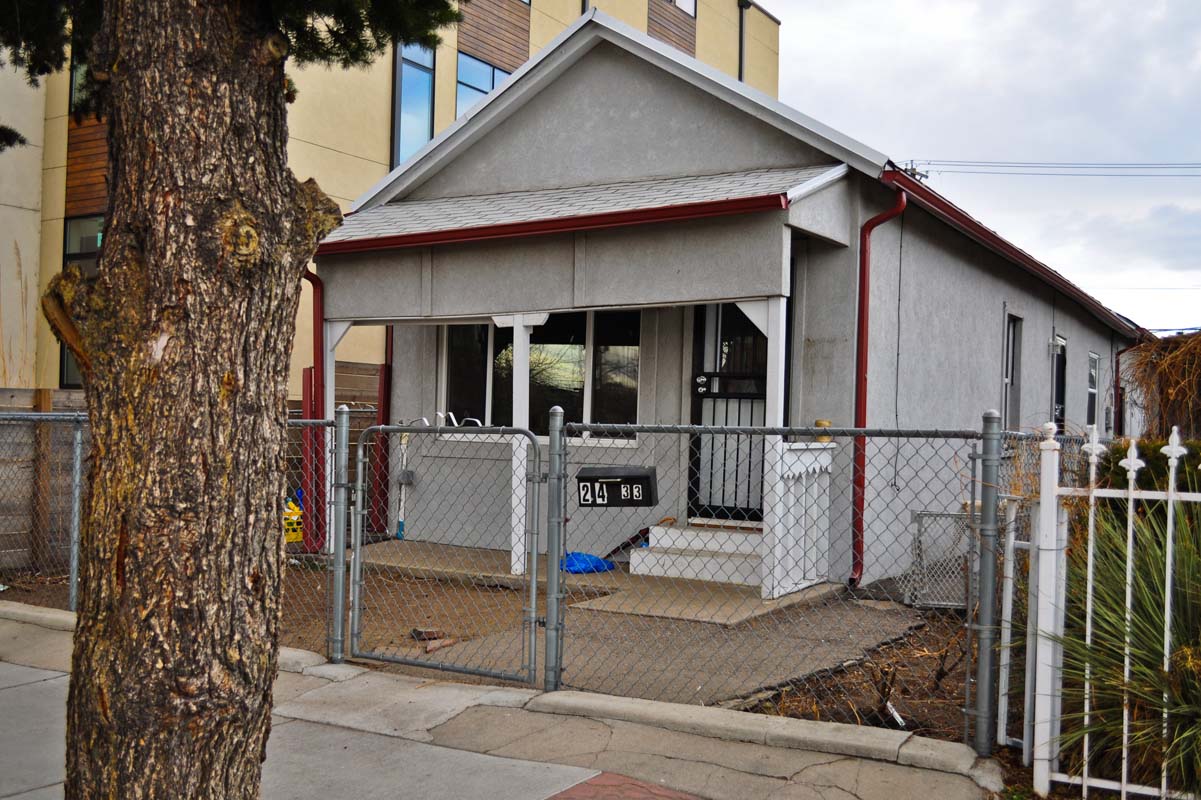 6. Second Empire. Constructed of red brick with a full mansard roof, this house was once a modest single story dwelling. The home once had an elaborate half length covered porch which was lost around the time it was remodeled and enlarged. 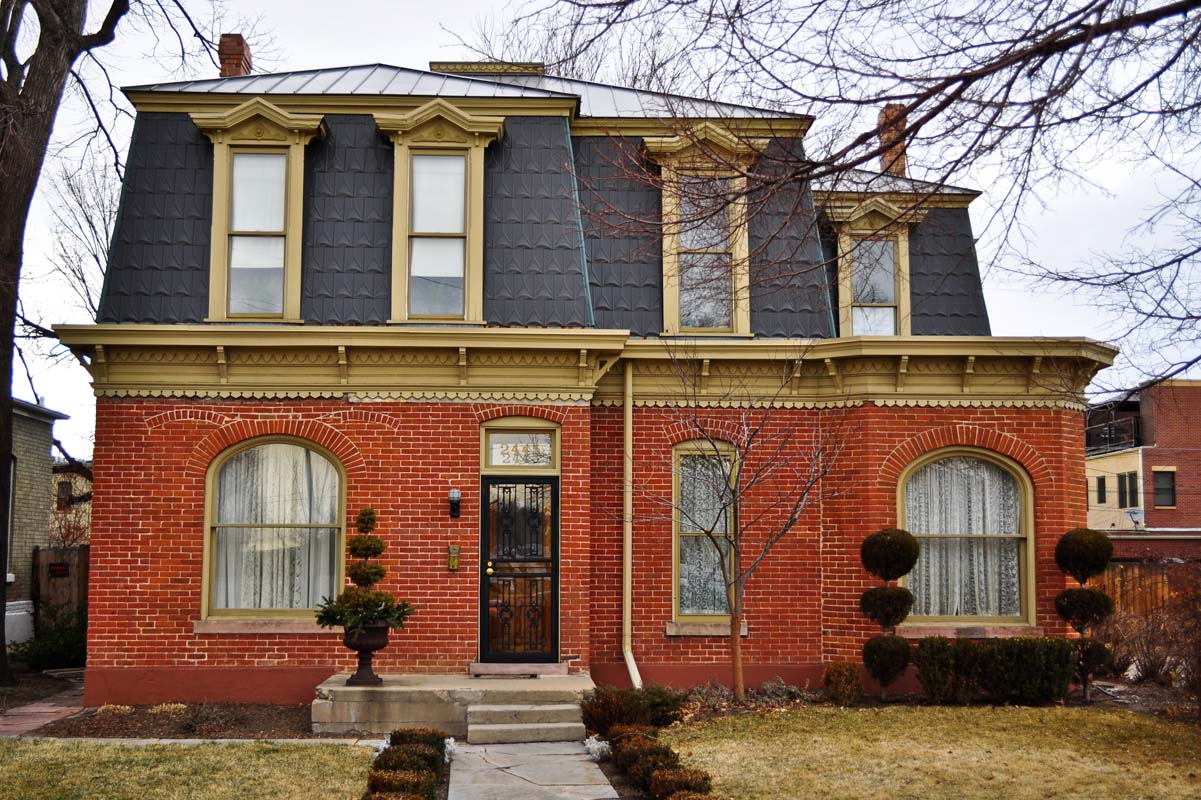 7. Frame Vernacular. Many of the earliest homes were very basic and lacking any ornamentation similar to this home in the Highlands, however the majority seem to have been altered with additons, porches etc. 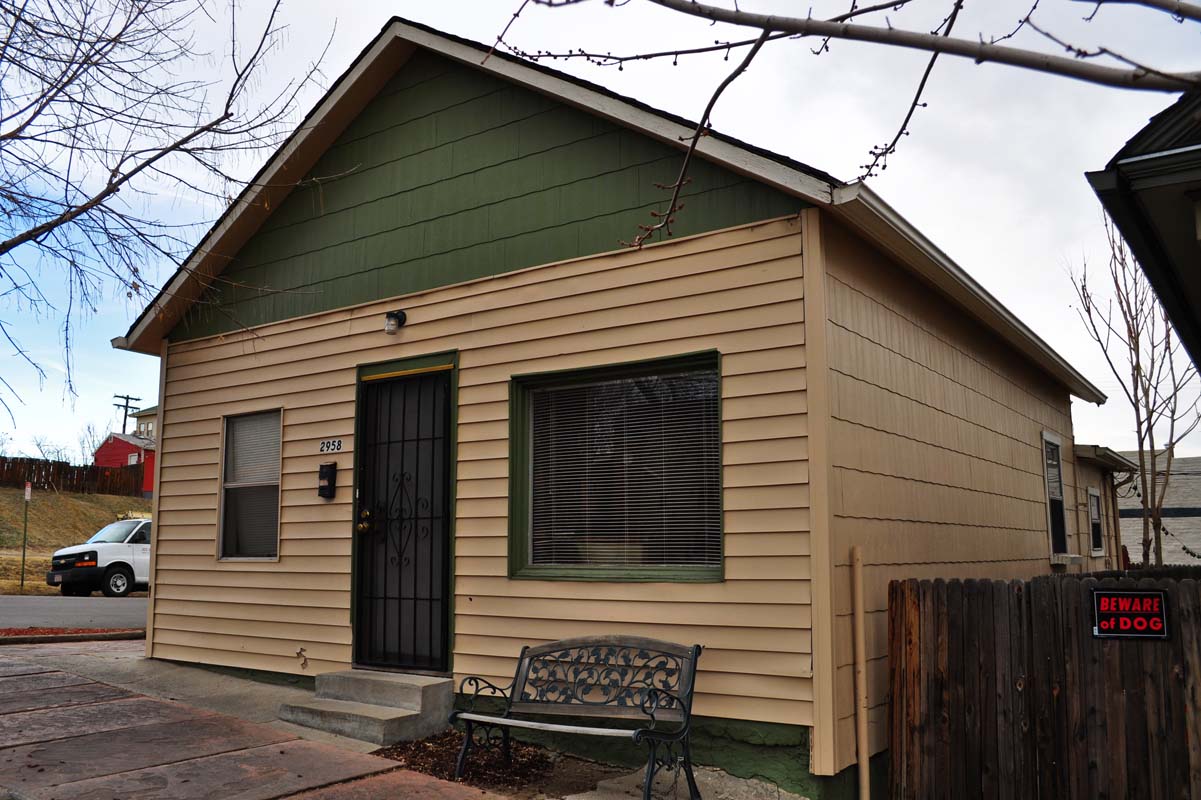 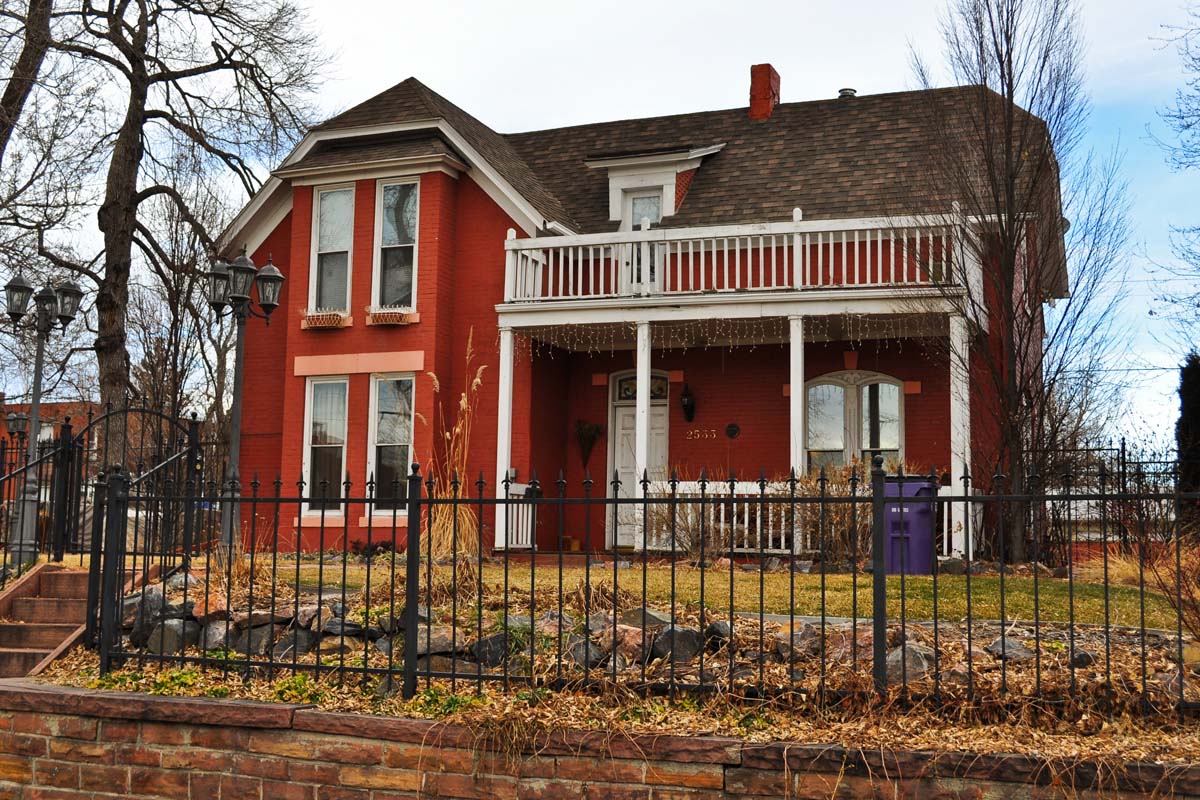 I made this note in the Comment section below, but since some people don’t read the comments, I thought it was important to add this to the main blog post.

A general note about the data in this series:

I have no doubts that there are errors in the Assessor’s database. The data set I’m working with has about 129,000 records, so there are plenty of opportunities for errors to exist in such a large collection of data. Since there is no way I can verify data of that magnitude, my only choice is to accept the data as is (although, that’s not to say I didn’t do a fair amount of data scrubbing before I started, but one can only go so far). Living with a small degree of error is OK with me anyway, as this analysis isn’t about any particular property here or there, but about broad trends in the geographic distribution and architectural evolution of Denver’s single-family housing stock over many decades. Even if 1% of the data was somehow flawed, the 99% accurate data remaining are more than sufficient to reflect the macro-level perspective I’m seeking.

The two data fields where accuracy can be a factor are Year Built and Property Type. For Year Built, that is obvious: if the year listed in the database isn’t correct, then it isn’t, but I’m not in a position to do anything about it. For Property Type, I’ve queried the database for properties listed as Single-Family Residential. If a single-family house is tagged as something else: Duplex, Commercial, etc., for whatever reason, then that record isn’t in my data set.

For example, take Denver’s historic Four Mile House. It was built in 1859 as a house/rest stop on the trail to Denver. It is Denver’s oldest surviving structure. However, according to the assessor’s records, its Property Type is tagged as “Industrial-Social/Recreation” (to reflect its historic farm/museum status); therefore, it’s not in my data set.