We’ve now arrived at the 1940s in our investigation of the geographic and architectural attributes of Denver’s single-family homes. For previous installments in this series, please use the links below:

The 1940s was Denver’s ninth full decade as a city and its second busiest from a home-building perspective. From 1940 to 1949, over 16,000 single-family detached homes were built in Denver. While few homes were built during the first half of the decade due to World War II, the second half of the decade represented a time when pent-up demand for housing from the previous fifteen years was relieved through wide-scale construction of new subdivisions in every direction on the city’s perimeter. Thousands of returning veterans took advantage of low-interest, zero-down GI Bill mortgages to fuel Denver’s home-building spree. With the war over, the baby boom underway, and a strong economy, Denver’s population increased by over 90,000 during the 1940s, from 322,412 to 415,786, a 29% increase. 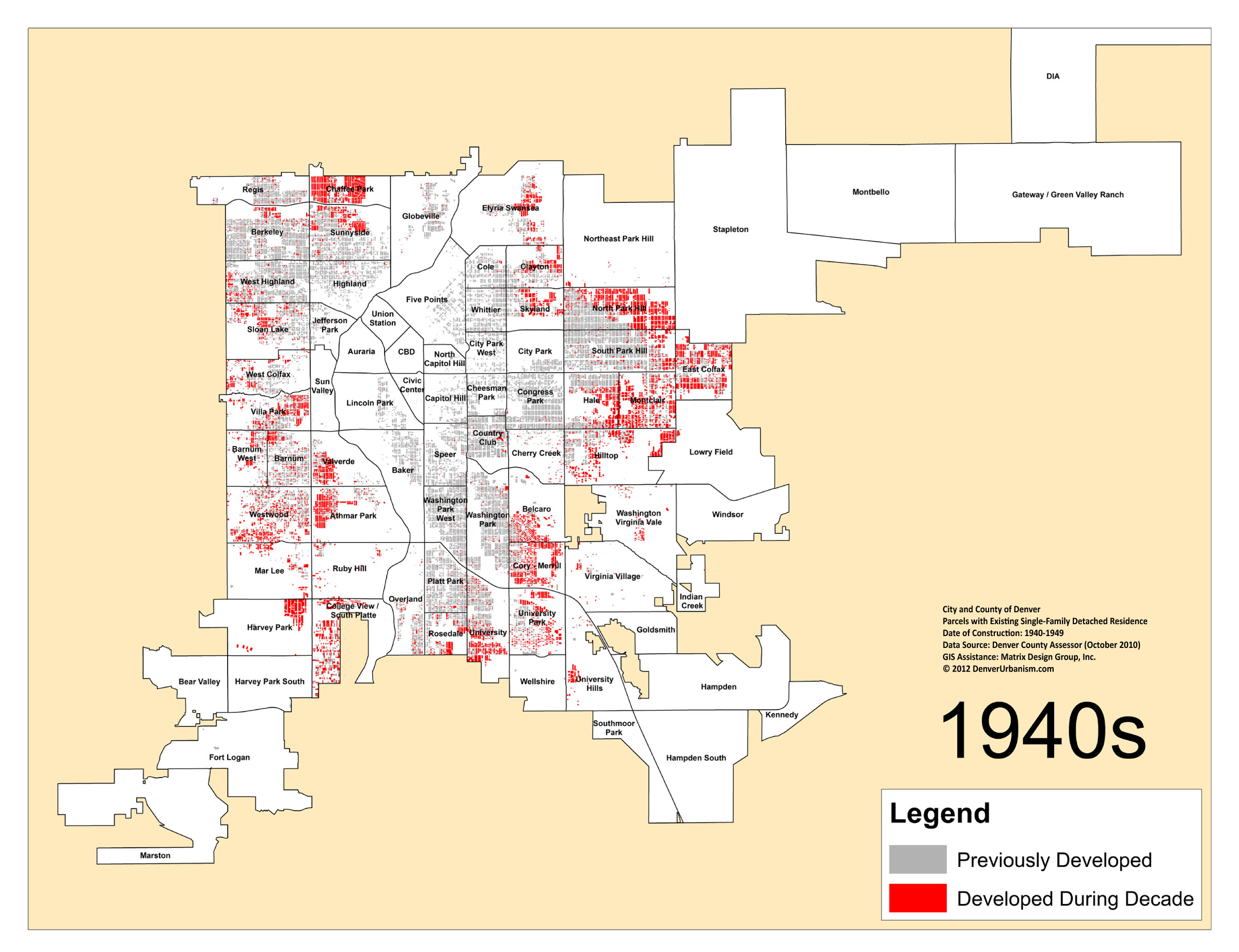 In Northwest Denver, a big chunk of the Chaffee Park neighborhood was built out in the 1940s with substantial development occurring in Sunnyside, West Highland, and Sloans Lake. West and Southwest Denver continued its strong growth from the 1930s as numerous neighborhoods, like Villa Park, Valverde, Athmar Park, Westwood, Harvey Park, and College View/South Platte, expanded.

East of the Platte, the North Park Hill, Montclair, East Colfax, Hale, and Hilltop neighborhoods exploded with growth. Even long-established neighborhoods like Elyria-Swansea, Clayton, and Skyland, witnessed substantial home-building. To the southeast, Belcaro, Cory-Merrill, University, University Park, and Rosedale also grew steadily. Overall, a ring of new and expanding neighborhoods surrounded Denver’s pre-War development by the end of the decade.

Here are the 1940s parcels colored in red over a current Google Earth aerial: 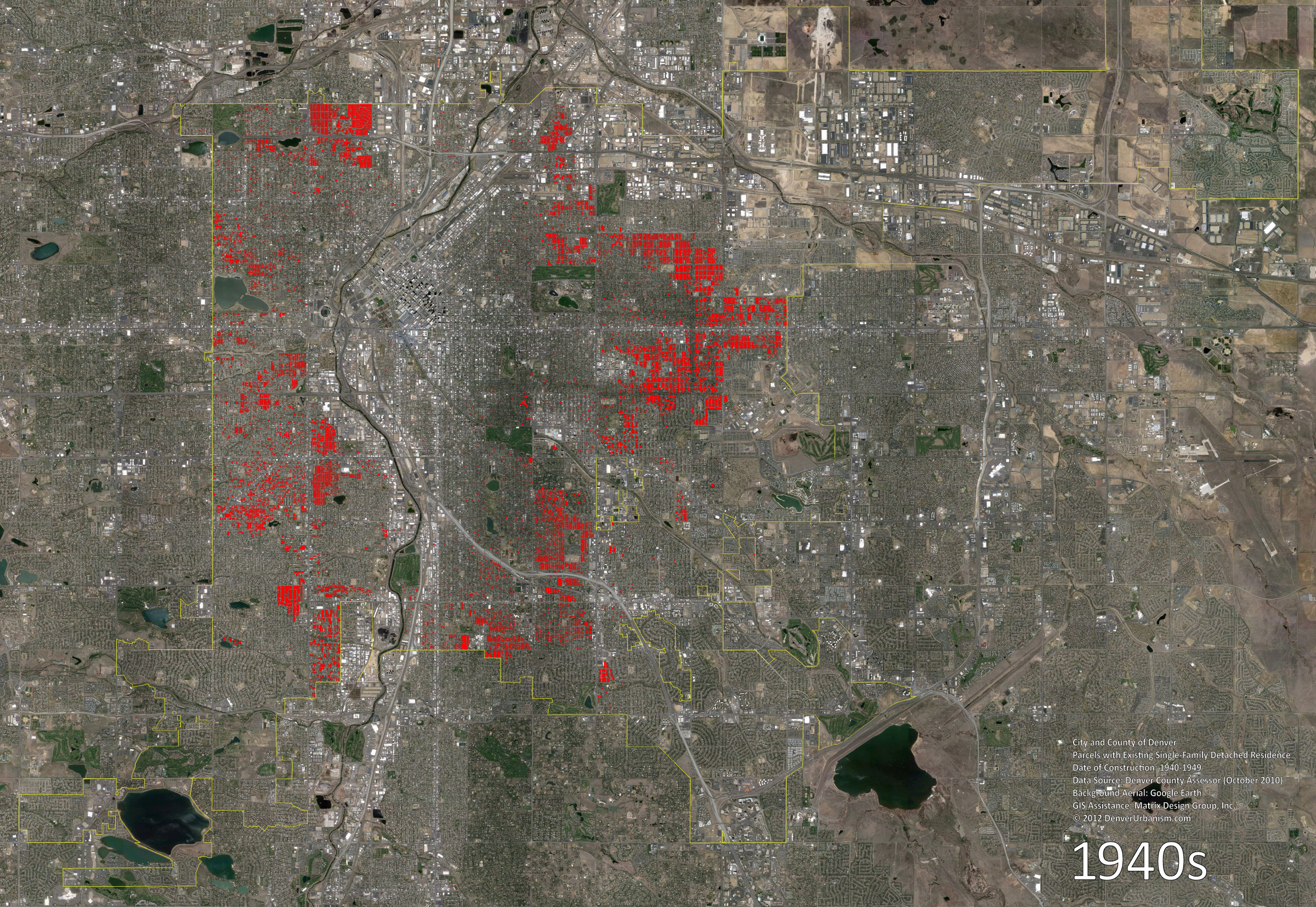 The majority of domestic construction halted between 1941 and 1945 due to World War II. Afterwards in 1946, houses based on historical precedent were losing favor to new variations of the modern styles that had only just begun to flourish in the pre-war years.

1. Minimal Traditional. One of the earliest of the modern styles, this type was a simplified form loosely based on the previously favored Tudor style of the preceding two decades. Featuring a dominant front gable and chimney, the steep Tudor roof pitch is lowered and the façade is simplified with the majority of the traditional detailing omitted. The eaves and rake are close as opposed to overhanging in the succeeding Ranch style. This was by far the most common housing type in the post-war years, and there are countless vernacular examples throughout Denver. Top left (Sloans Lake), top right (Hale), bottom left (Montclair), bottom right (North Park Hill):

2. Italian Renaissance/Mediterranean Revival. This style features a low-pitched hipped roof with the less common asymmetrical façade. The arched windows and entry and the tile roof are characteristic of the style (South Park Hill): 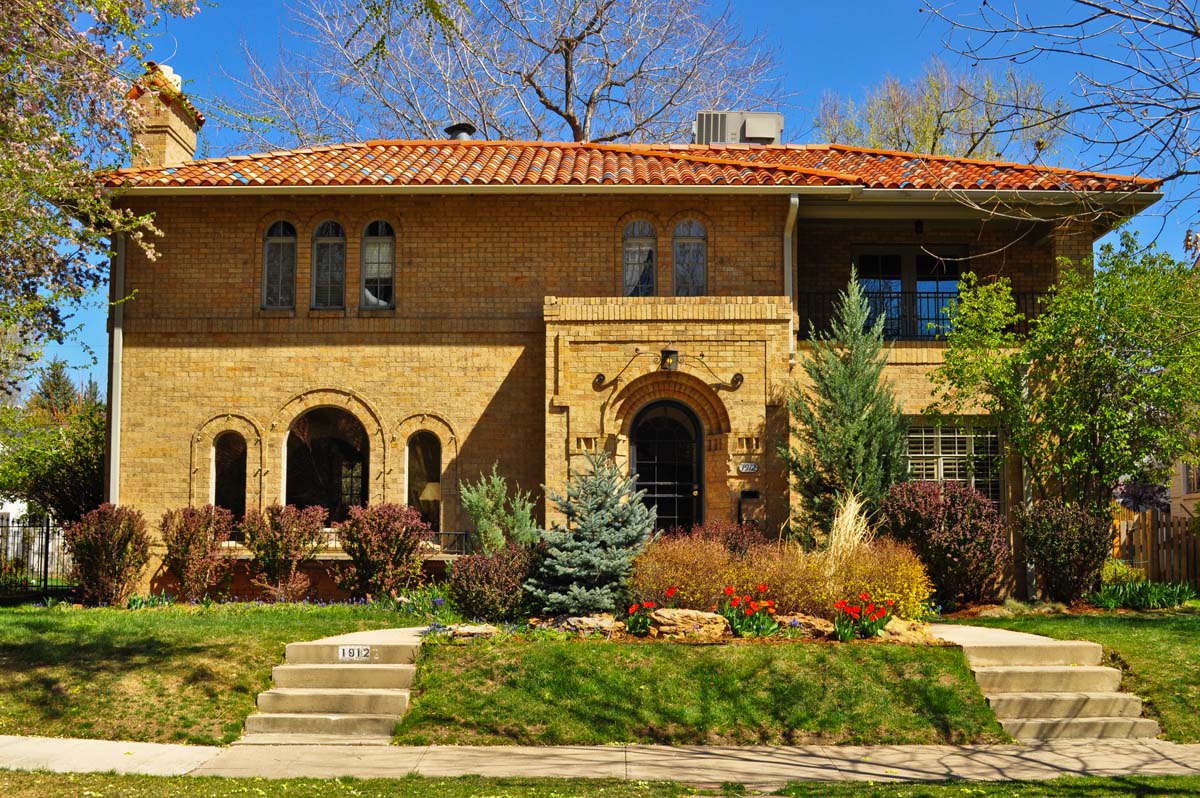 3. French Eclectic. An example of the towered subtype, this home features a prominent round tower with a conical roof housing a Gothic-arch entry. The home was completed in 1941 just before WWII halted most non-military construction (Hilltop): 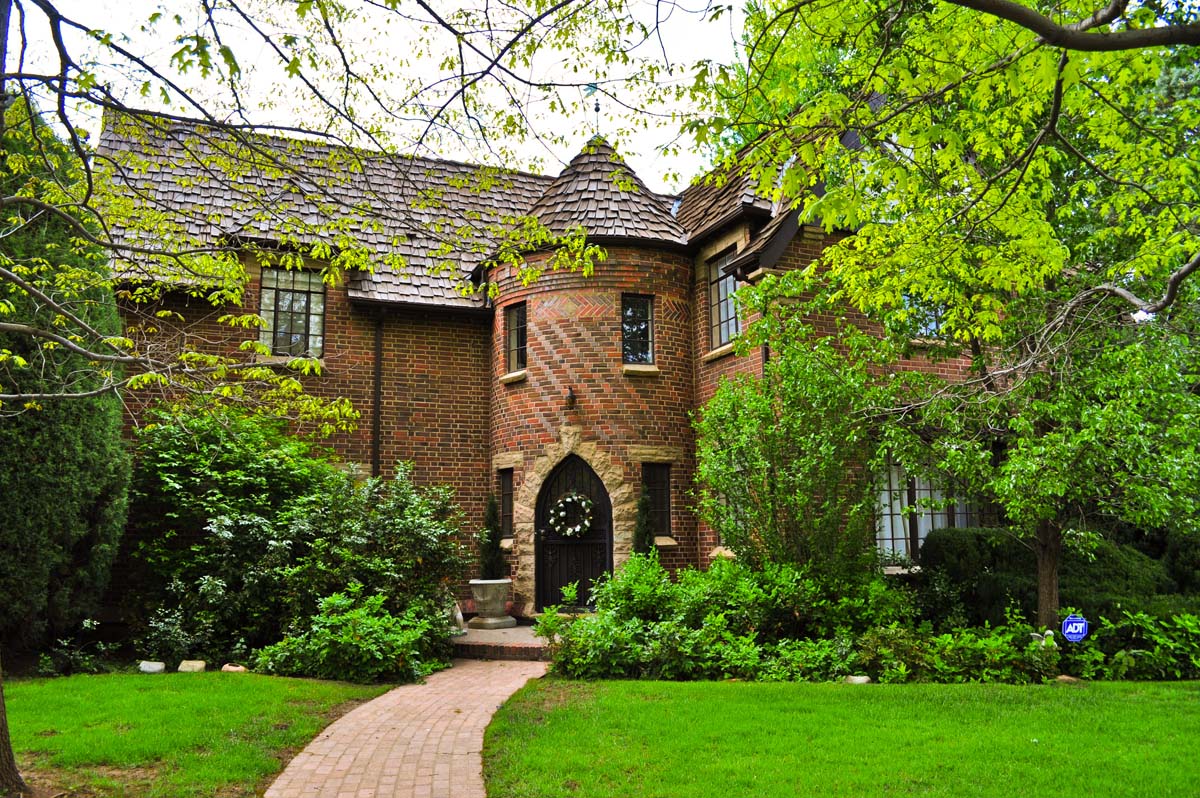 4. Monterey Revival. The style is a free interpretation of the Anglo-influenced Spanish Colonial homes of Northern California. Characteristics include a low-pitched roof, a cantilevered second-story balcony usually covered by the principle roof, French doors which open onto the balcony, and simple Spanish or Anglo-Colonial details (Hilltop): 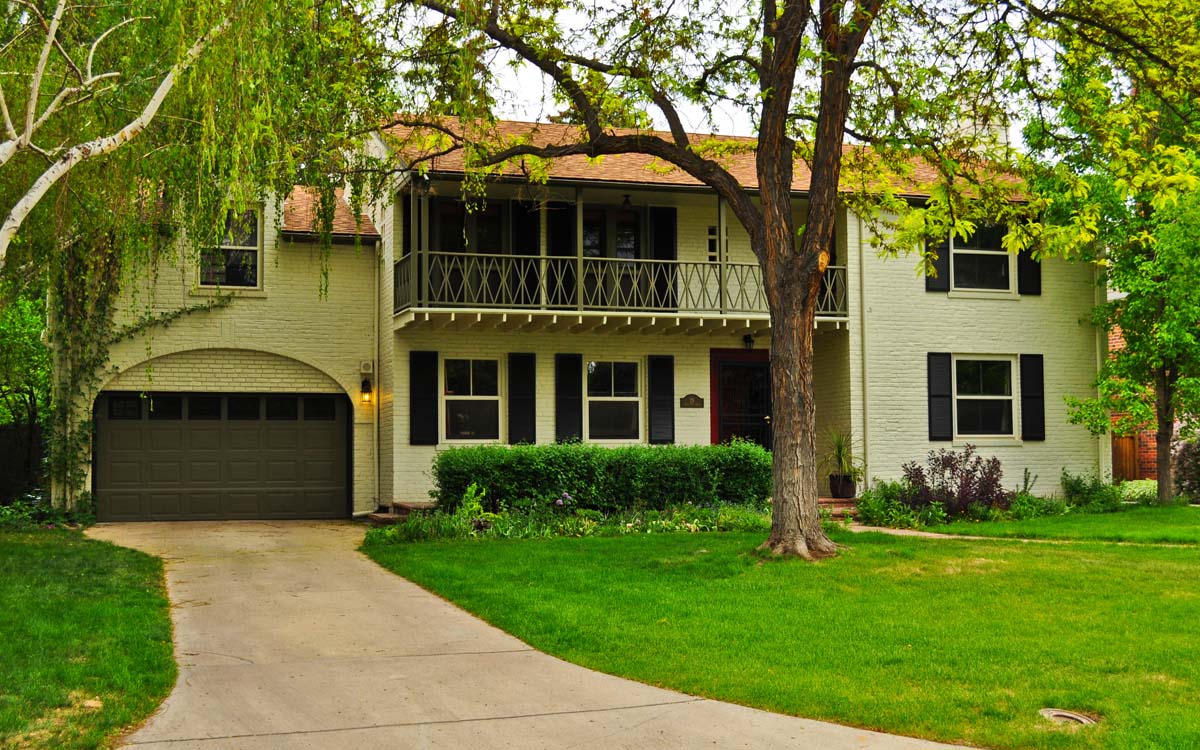 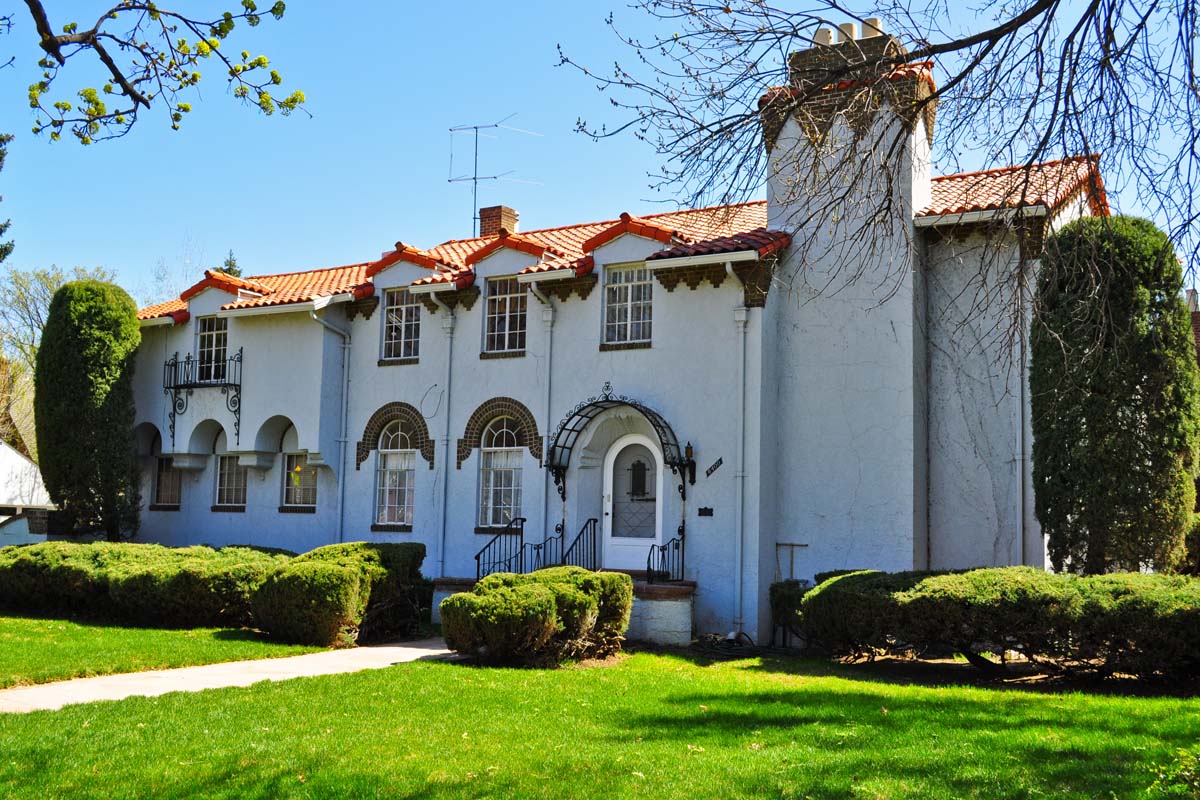 6. Neoclassical. An example of the full-façade porch subtype, this home features a colonnaded full-width-and-height porch crowned with a roof-line balustrade. The porch-support columns are the slender, square type that came into use after about 1925. The pediment at the entrance is common. Notice the increasing frequency of front loading attached garages (Hilltop): 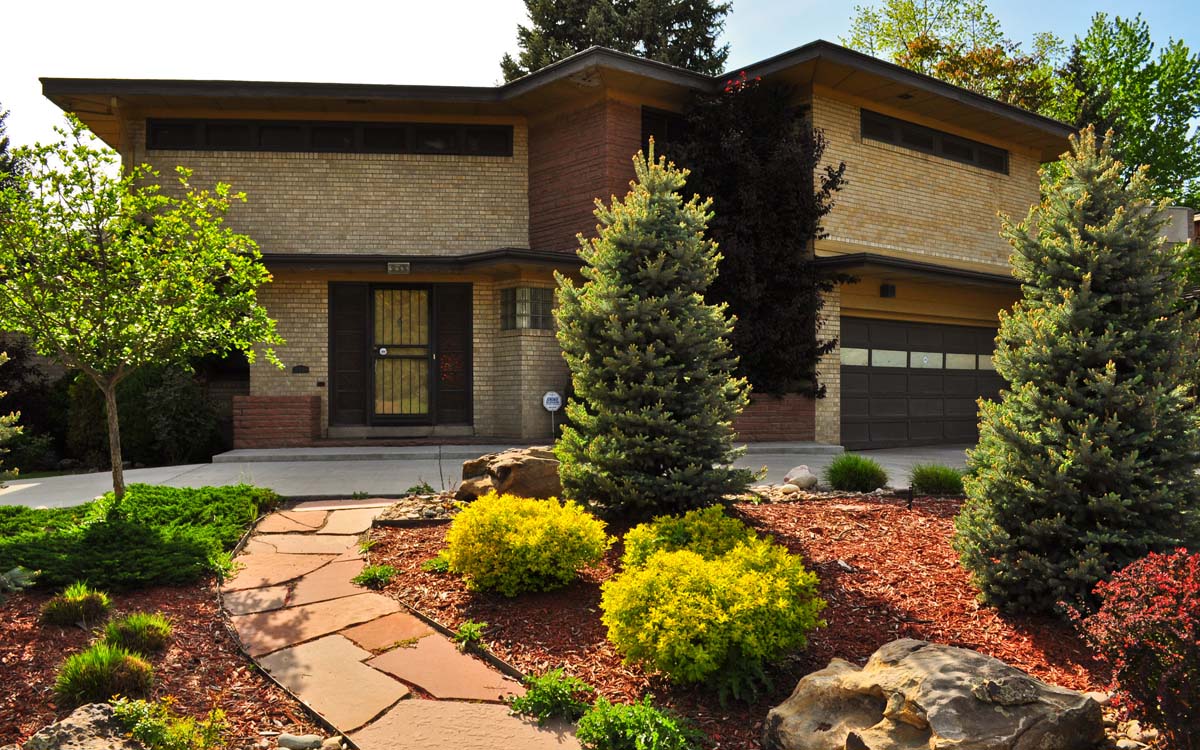 8. Second Phase International. This style emerged as the immediate successor to the International Style. The style encompasses functionalism and reductivism in that the design is influenced by functional concerns expressed with austere simplicity. Common characteristics include a horizontal orientation with strong secondary verticals, eaveless walls, large sections with clear or tinted glazing, glass or metal curtain walls, rectilinear conception of the structure’s volumes, no ornament, flat and unorthodox roofs, and the use of the cantilever (South Park Hill):

9. Usonian. The culmination of Frank Lloyd Wright’s later work, the Usonian style is based on his concept of naturalism. Defining characteristics include a horizontal orientation, cubist conception of the building’s volumes, ribbon, corner, and clerestory windows, traditional materials (wood and stone), the use of similar materials inside and out, geometric ornament, overhanging eaves, and the use of the cantilever (Hilltop):

Up next: the 1950s, the decade with the greatest number of single-family homes built in Denver… by far.