Our series exploring the geographic and architectural attributes of Denver’s single-family homes continues… now it’s the 1960s. For previous installments in this series, please use the links below:

The 1960s was Denver’s eleventh full decade as a city. Widespread suburbanization—and the annexation of many of those new suburban developments by Denver—continued in the 1960s. During the decade, Denver annexed 17,533 acres of land, or about 27.4 square miles. By the 1960s, Denver’s attitude about annexations was very aggressive—even described by some as “belligerent”—in an attempt to keep residents, and political power, within the city. The 1960s represents the decade with the greatest amount of land annexed by the City and County of Denver, with the exception of the 1980s annexation of 53 square miles of land from Adams County for the development of Denver International Airport.

Following the 1950s, Denver’s top decade for the number of single-family homes built in the city, the 1960s saw a significant decrease in the number of homes built in the city, despite all the annexations. From 1960 to 1969, approximately 9,500 single-family detached homes were built in Denver, about one-third of the number built in the 1950s. During the 1960s, Denver’s population increased by 20,791, from 493,887 in 1960 to 514,678 in 1970, a 4.2% increase. While new neighborhoods were being added to the city, population losses in older parts of the city due to well-documented urban issues at that time (court-ordered busing, urban blight, etc.) restrained the city’s population growth. 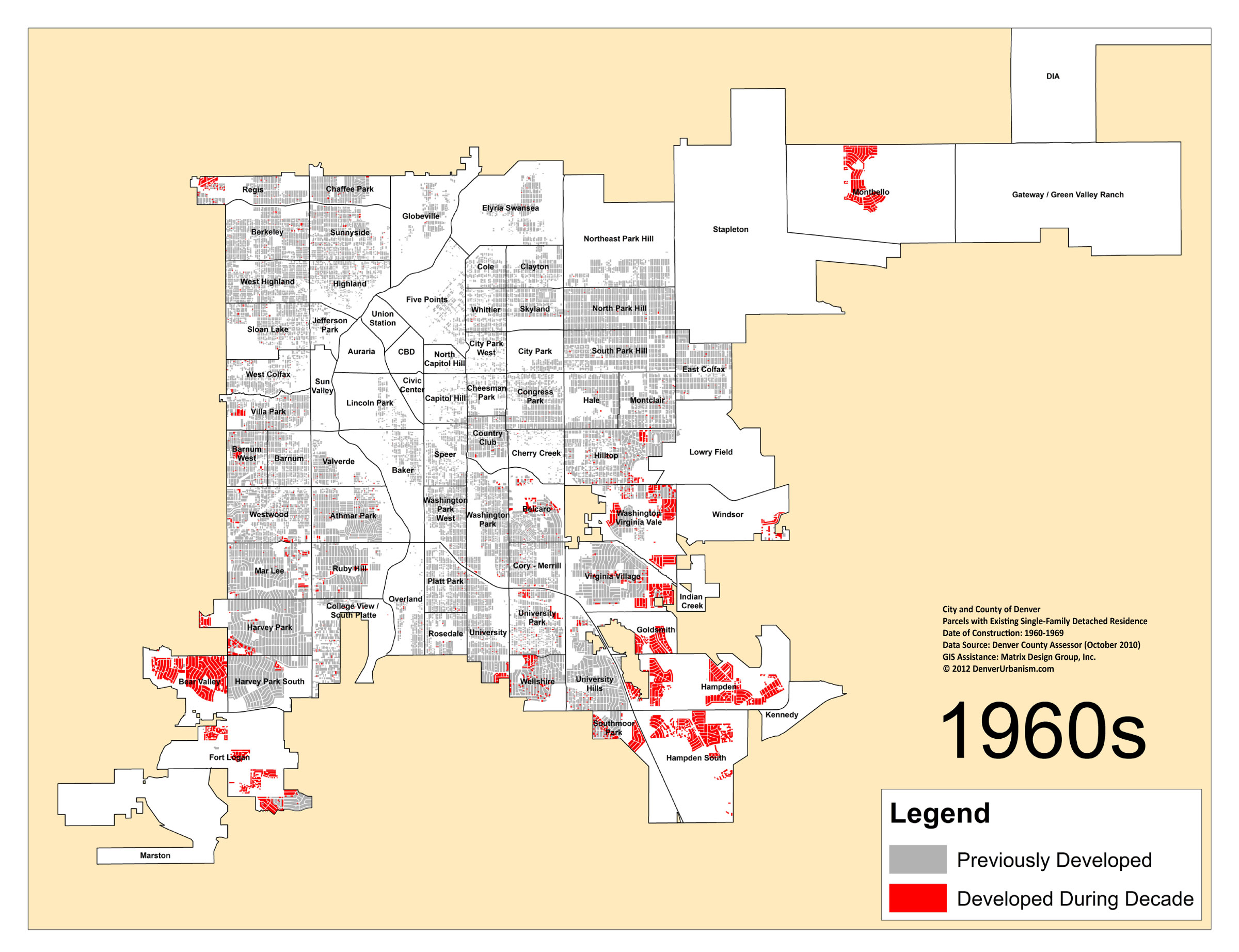 Like the 1950s, most of the new homes built in the city in the 1960s were concentrated in new subdivisions on the city’s periphery. Virtually gone are the scattered new homes built within existing neighborhoods, as was the case up through the 1930s. Most of the city’s close-in neighborhoods approached full build-out, so the majority of new homes were built in new subdivisions like Bear Valley, Fort Logan, Hampden, Hampden South, Goldsmith, and Montbello. Neighborhoods launched in the 1950s that didn’t develop in full, like Virginia Village and Washington-Virginia Vale, continued to expand.

Here are the 1960s parcels colored in red over a current Google Earth aerial: 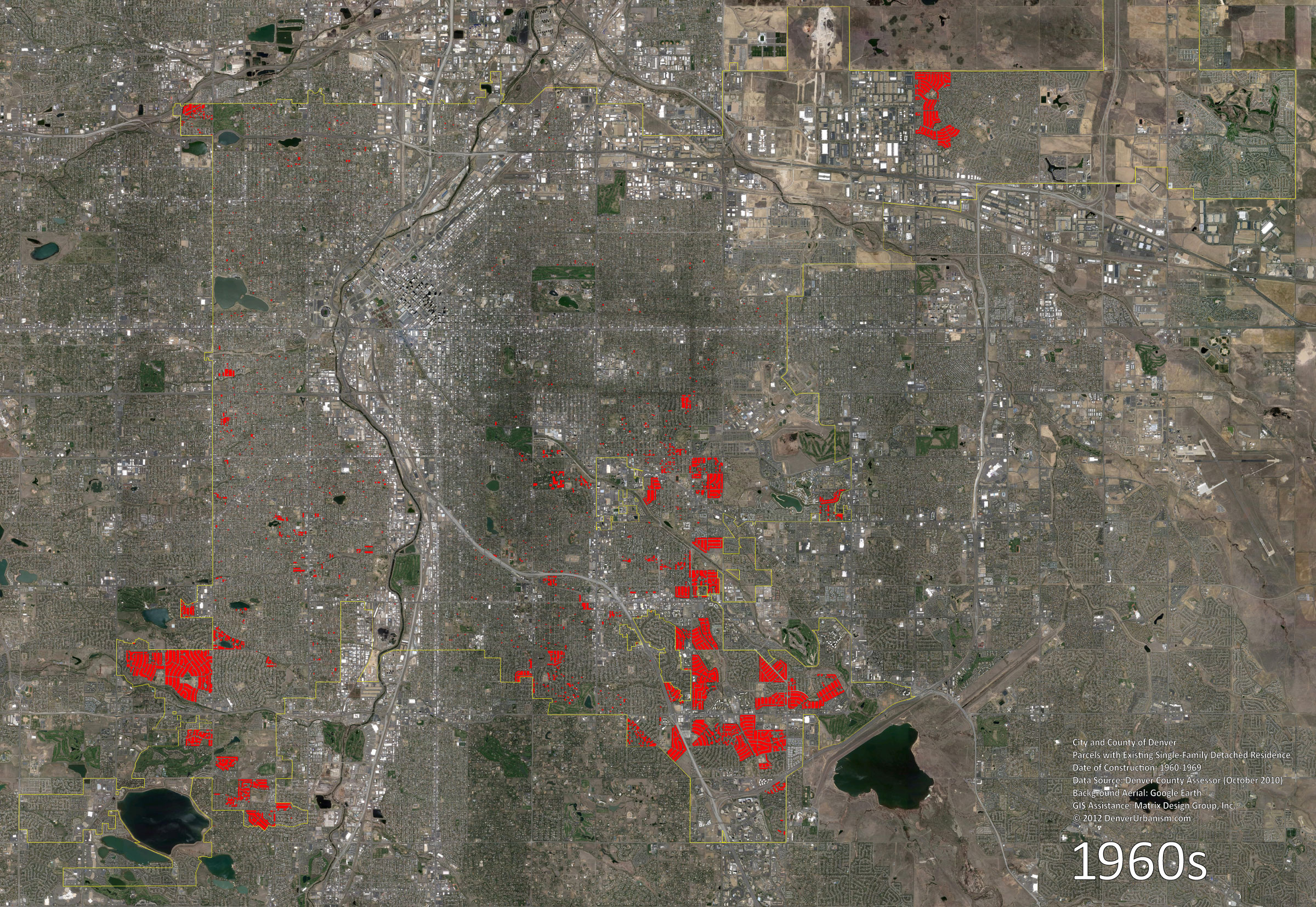 How about those groovy 1960s architectural styles? Here’s Mark’s photos and architecture commentary:

The 1960s was a decade once again dominated by the modern Ranch style and its variants. By the late ‘60s, however, domestic architectural fashions were again shifting back towards styles based on traditional architectural shapes and detailing, rather than modern. The Neoeclectic phase of architectural styles began to emerge.

1. Ranch. As previously detailed, the Ranch style features asymmetrical single-story homes with very low-pitched roofs and broad, sometimes rambling facades. The eaves may be either boxed or open with the rafters exposed and have a moderate or wide overhang. Both brick and wooden facades are common, sometimes in combination. Modest traditional detailing, usually loosely based on Spanish or English Colonial precedents, is common and frequently entails decorative shutters and porch-roof supports. Ribbon windows are common as are large picture windows in living areas. Some examples from the decade of the Ranch and its variants are below. Top left (Washington-Virginia Vale), top right (Bear Valley). Bottom left (Hampden), bottom right (Southmoor Park):

3. Neo-eclectic/Mansard. Named for its characteristic roof, the style first appeared in the ‘60s and was used for commercial buildings and apartment houses as well. Builders realized that an inexpensive way to gain a dramatic decorative effect was to slightly slope the upper wall surfaces and cover them with decorative shingles and detailing (Hampden South): 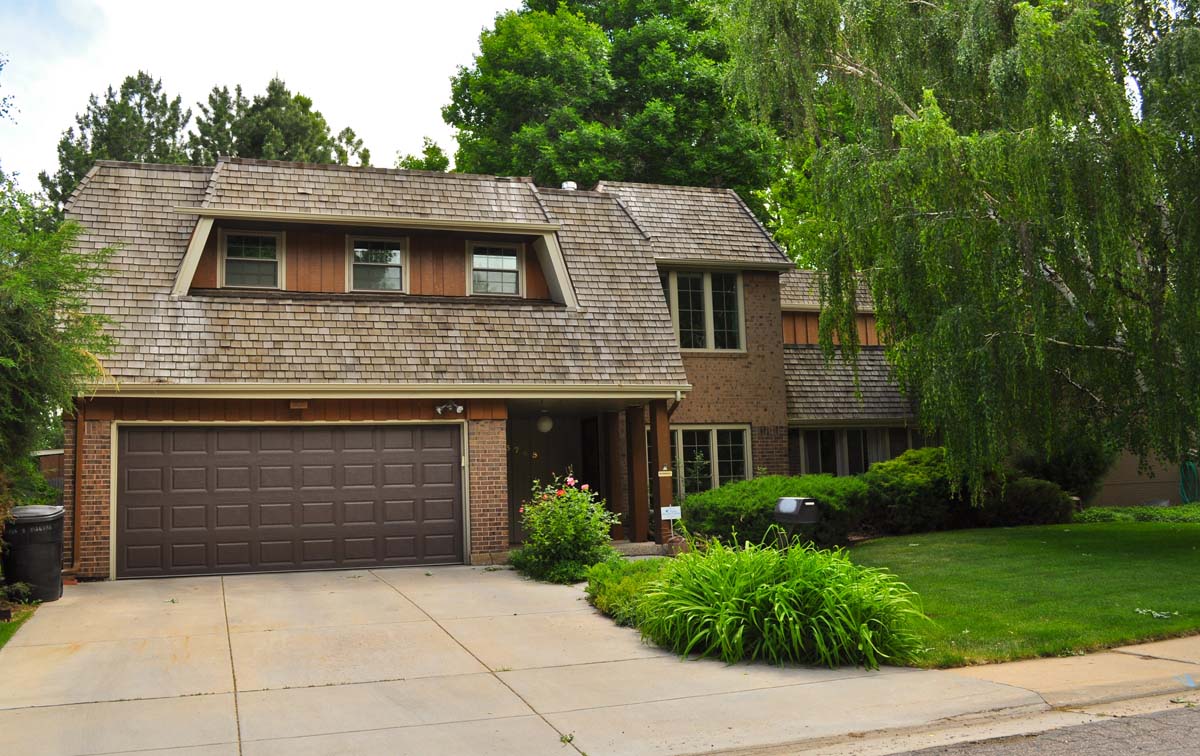 4. Neo-eclectic/Neo-colonial. This style depicts a very free adaptation of the preceding Colonial Revival style showing less concern for copying the more historically precise Colonial prototypes. Metal windows and widely overhanging eaves are common with free interpretations of Colonial door surrounds, colonnaded entry porches, and dentiled cornices. Roof pitches differ in that they may be either steeper or lower than earlier Revival examples (both photos from the Fort Logan neighborhood):

5. Neo-eclectic/Neo-French. As with other Neo-eclectic styles, little attempt is made to mimic its French Eclectic forebears. Features steeply pitched hipped roofs and through-the-cornice dormers. Doors and windows are frequently round or segmentally arched (Fort Logan):

6. Usonian. Defining characteristics include a horizontal orientation, cubist conception of the building’s volumes, ribbon, corner, and clerestory windows, traditional materials (wood and stone), the use of similar materials inside and out, geometric ornament, overhanging eaves and the use of the cantilever. Left (Virginia Village), right (Fort Logan):

7. Second Phase International. As previously detailed, common features of this style include a horizontal orientation with strong secondary verticals, eaveless walls, large sections with clear or tinted glazing, glass or metal curtain walls, rectilinear conception of the structure’s volumes, no ornament, flat and unorthodox roofs, and the use of the cantilever (Virginia Village): 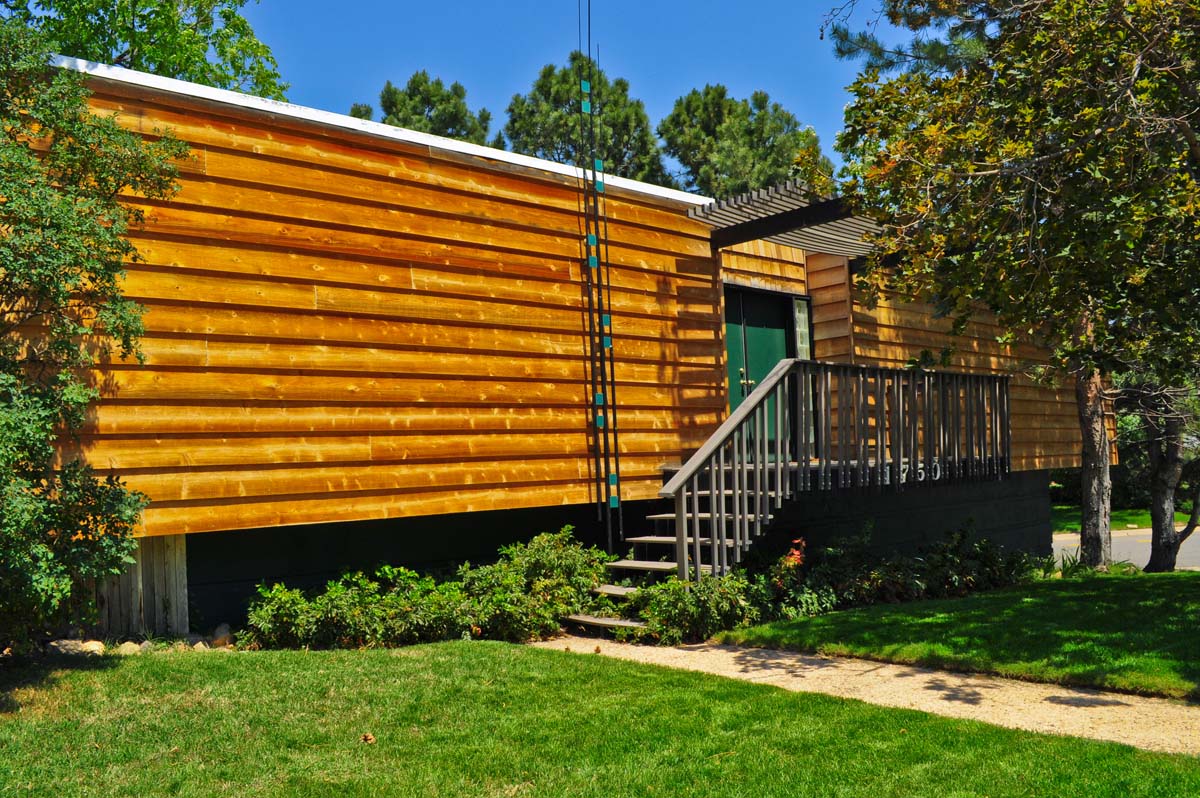 8. Expressionism. A rare style in post-war American architecture, it was primarily found in the form of luxury homes as the dramatic building forms and experimental materials used proved too costly. Defining characteristics include sculptural forms, irregularly-shaped windows, non-traditional structural materials, use of experimental materials, organic or geometric floor plans, use of the cantilever, and butterfly or other unconventional roof designs (Hilltop):

9. Formalism. The style reintroduced to Modern Architecture a classicism through regular and sometimes symmetrical massing, in contrast to the International Style and its irregular, asymmetrical form. Formalism was to be superseded by Post Modernism. Characteristics include a vertical orientation, spandrels vertically link windows, recessed windows, vertical piers, eaveless walls or coping at the top of walls, flat roofs, and may include decorative sun-screens, screen walls, or planters (North Park Hill):