It’s time for our annual look at population changes in Denver and other counties throughout Colorado. Use these links for previous years: 2014 | 2013 | 2010

For the sixth time in the past seven years, Denver County has led the state in numeric population growth, according to the US Census Bureau. The Census Bureau’s recently released 2014 population estimates show that Denver County (the City and County of Denver) had a population of 663,862 on July 1, 2014, an increase of 15,461 over their July 2013 estimate. Denver’s 2010 Census population count was 600,158.

Here are two tables I’ve prepared showing the “Vintage 2014” postcensal estimates for the Top 10 Colorado counties in both numeric and percentage population gain between 2013 and 2014 (click to embiggen):

As you can see, Denver led the state with a gain of 15,461 and was in the Top 10 by percentage change with a respectable 2.38% increase. Denver also regained the title of the most populous county in Colorado, passing up El Paso County by 343 people. El Paso overtook Denver in 2004 and held a 22,105 advantage in 2010. The first table also reveals another interesting fact: Douglas County just passed up Boulder County in population.

Let’s take a look at the Top 10 Colorado counties in both numeric and percentage population gain between the 2010 Census and the new July 2014 estimates:

Here are two additional analyses I’d like to share with you that focus on just the seven-county Denver/Boulder metro area (Adams, Arapahoe, Boulder, Broomfield, Denver, Douglas, and Jefferson counties). The first set of tables show the population counts and estimates from 2010 through 2014 for these seven metro counties, followed by a column percent-of-total table showing each county’s percent of the metro area total population for each of the five time periods: 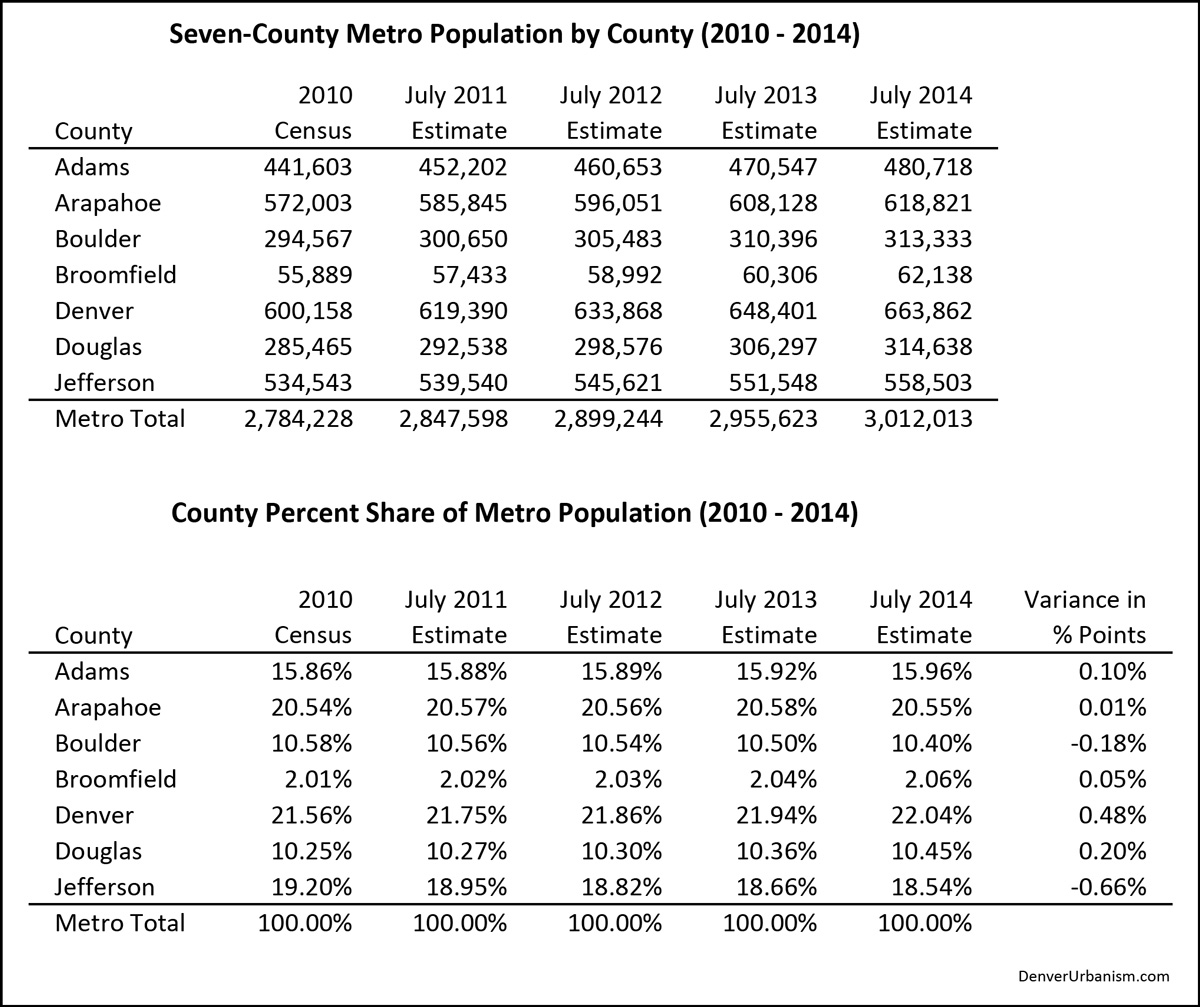 The far right column in the percentage table shows each county’s variance (in absolute percentage points) of share of metro population between 2010 and 2014. Denver began the decade with a 21.56% share, and that has increased by 2014 to 22.04%. While the increase is slight, it is notable considering that Denver’s share of the metro area population has been decreasing since the 1930s and this represents a reversal of that trend. Arapahoe’s percent share has stayed mostly flat, while Adams, Broomfield and Douglas counties have seen small increases. Boulder’s share has dropped slightly, with Jefferson County seeing the largest decrease of 0.66% percentage points. Also note that the total population for the seven Denver/Boulder metro area counties passed the 3 million mark for the first time.

The columns on the left show the numeric population changes for the seven counties between 2013 and 2014 and the percent each county captured of the metro total increase of 56,390. The next column to the right shows each county’s share of the metro population at the beginning of this time period (2013). The rightmost column compares these two percentages by calculating the absolute difference in percentage points. Denver’s 27.42% share of 2013-2014 metro growth is 5.48 percentage points higher than its proportional share of the metro population, indicating that Denver over-captured in population growth during the time period. Douglas, Adams, and Broomfield also grew more than their relative shares by a few percentage points. Arapahoe was down slightly, with Boulder and Jefferson counties significantly under-capturing their proportional share of metro area growth.

With landlocked Denver likely to continue to grow at a steady pace for the foreseeable future, infill development, higher-density development, transit-oriented development, and significant investment in bicycle, pedestrian, and transit infrastructure are absolutely critical to ensure we grow in a smart, sustainable manner.