Today we’ll take a look at the 2010 Census results for Colorado’s 64 counties.

At the time of the previous census in 2000, Broomfield wasn’t a consolidated City-County yet. It was created in 2001 from portions of Boulder, Adams, Jefferson, and Weld counties. Consequently, its 55,889 population in 2010 resulted in a combined decrease in those four counties’ population of the same amount.

All 64 counties in descending order:

El Paso County passed up Denver as the most populous county in the state. For the past several years, population estimates have placed the two counties neck-and-neck with each other, with El Paso now taking a firm lead. El Paso County covers 2,130 square miles compared to Denver’s 155 square miles, so it was inevitable that El Paso would someday grow larger than Denver.

Seventeen of the state’s 64 counties—27%—lost population during the decade. Most of these counties are located on the Eastern Plains and in south-central Colorado. That one-quarter of our counties lost population is remarkably consistent with the recent Associated Press article that 1 in 4 counties in the United States are “dying”.

Here are two additional tables, showing the Top 10 counties in numeric change and in percentage change during the decade: 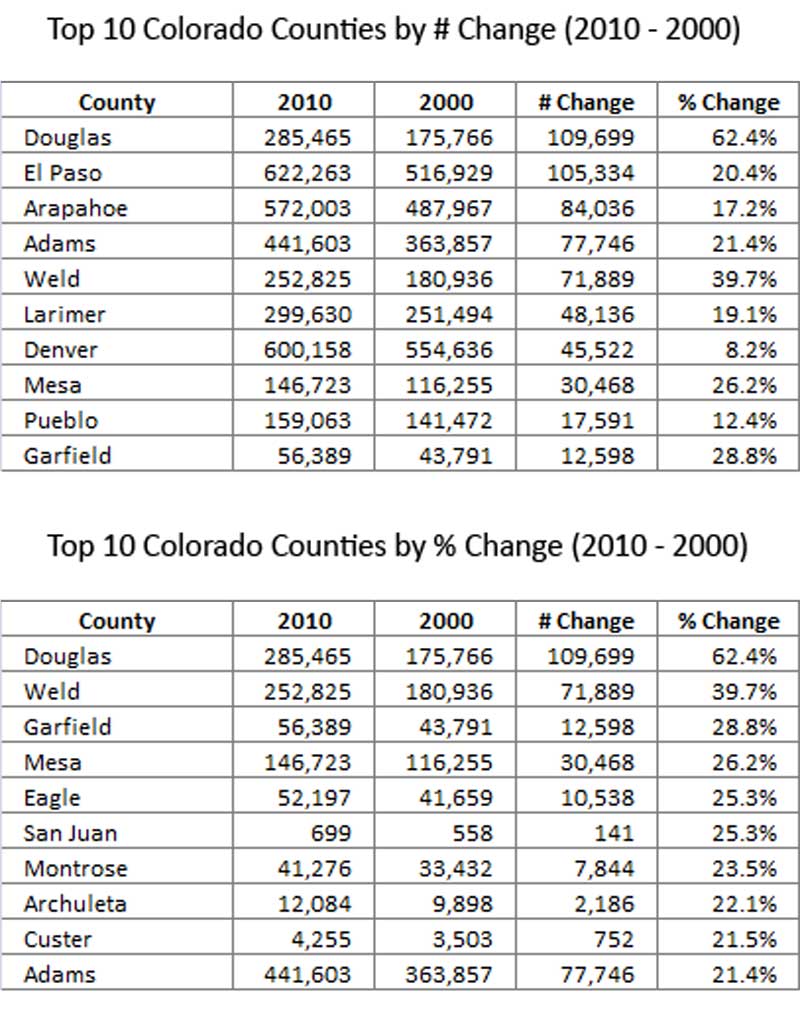 Douglas County took the top spot on both charts, experiencing both the highest percentage gain (Weld County was a distant second) and numeric gain (just squeaking past El Paso) for the decade. Douglas County’s growth has been phenomenal over the past few decades. In 1970, Douglas County’s population was 8,407 and in 1990 is was 60,391.

For an interactive map of 2010 Census, go here at the Census Bureau website.