Operation of The Denver Horse Railway Company began in 1871 with two miles of track between 7th and Larimer to the area now known as Curtis Park. In 1872, with a modified name, The Denver Railway Company built the Horse Barn in the city’s northeast hinterlands at 33rd and Arapahoe. To accommodate a growing fleet of horses, mules, and streetcars, the Horse Barn contained three sections: a two-story stable and hayloft in the center; an office and storage space behind the stable; and a two-track car barn at the corner. Ultimately, The Denver City Cable Railway Company (its third and final name) operated on 50 miles of track, with 85 cars and 600 horses. New demands for rapid transit led to a major shift from horsepower in favor of the cable-driven system. Horse-drawn streetcars, still reliable and cost efficient, were banished to the suburbs. By 1890, the Horse Barn at 33rd and Arapahoe was no longer used by the streetcar industry.

Although horse-drawn streetcars were no longer commonplace in Denver, other services relied heavily on horsepower. The Horse Barn was still a desirable property in a prime location for downtown horse labor. As Colorado’s resource extractive economy frequently boomed and busted, mining prospects led many people to move to and from Denver, or relocate to new areas within Colorado. Denver businessman George E. Turner saw an opportunity to carry on the legacy of his father’s work handling cargo for the Pony Express and started a moving and storage business named Turner Moving & Storage to help people safely move their possessions.

The business experienced success no matter what the economic climate, as people immigrated to Colorado during boom times and emigrated during busts. Turner acquired and incorporated the Horse Barn as a storage facility for the horse-drawn carts and trailers in his fleet, and renovated the corner car barn into his home. Shortly before his death in 1932, Turner sold his company and the Horse Barn continued to serve as a moving and storage facility until it was abandoned in the mid-twentieth century.

The Denver Housing Authority (DHA) purchased the Horse Barn in 1992 as part of a community revitalization effort with plans to replace the building with residential units. DHA and the community realized the historic significance of the Horse Barn and jointly committed to preserving the building’s history. This included securing a Denver Landmark Preservation designation for the front facade, and investing significantly in its rehabilitation with support from The City and County of Denver’s Office of Economic Development.

In 2011, DHA worked with International Denver Enterprises (iDE) and Denver Urban Gardens to transform the Horse Barn into a mission based collaborative center. iDE, a Denver-based group which increased incomes for more than 20 million rural farmers in Asia, Africa, and Latin America, led the ambitious plan to finance and develop the consortium to inhabit the world’s first shared space for international development, recruiting more than two dozen organizations, many with a market-based approach to solving global challenges. iDE served as the founder and landlord until late 2013, when the Posner Center for International Development was formed as an independent nonprofit organization.

Here is an image of the Posner Center For International Development, courtesy of Doors Open Denver. 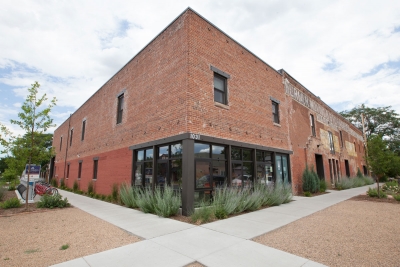 The Posner Center is named in recognition of the generosity of Joanne Posner-Mayer, and in honor of her parents, Jerry and Hanna Posner. Like many at the Posner Center, Jerry was an entrepreneur. He owned and operated Posner Hardware on Larimer Street with his mother until the mid-50s. In 1958, he moved the store to Franklin Street, just a few blocks from the Horse Barn, where he ran it with his wife Hanna until 1973.  Denver Urban Gardens (DUG) was seeking a new headquarters to increase their capacity, and expand opportunities for community members to grow their own fresh, healthy food and become leaders and educators in their own communities. Primarily serving in-need residents in Metro Denver, DUG has provided neighborhoods, schools, and partner organizations the essential resources to create and sustain their own community gardens since 1985. DUG’s multiple support and education programs focus on utilizing gardens as extraordinary places for learning and healthy living, and linking gardens with related local food system projects.

In 2012, after a collaborative design and planning process with DHA, iDE, Engineers Without Borders-USA, Bridges to Prosperity, Nokero, DUG and many dedicated partner organizations, the design-build firm Tres Birds Workshop broke ground on the building renovation, and began to transform the collapsing roof, crumbling masonry walls, and rotting floors into a place of renewed strength, beauty, and purpose. The Horse Barn re-opened its doors to this new purpose in 2013.

Today, hundreds of international development organizations call Colorado home. Working in various fields, such as agriculture, education, energy, health, infrastructure and microfinance, these organizations share a common goal to improve the quality of life for the poorest on Earth. Many serve similar populations and confront the same administrative burdens and financial challenges. Within three months of the Horse Barn’s July 2013 re-opening, the Posner Center grew to over 60 organizations and social ventures, with 150 employees, and scores of partners, interns and volunteers. No longer operating in isolation from one another, these tenants are able to exchange ideas, cut costs, and improve the products and services they provide. The Posner Center continues to build a community of innovators growing lasting solutions to global poverty. Denver Urban Gardens utilizes the flexible space of the Horse Barn to support the needs of an expanding network of community gardens, as well as providing system-wide programs and strategies centered on increasing healthy food access for in-need residents of Metro Denver.

The Denver Housing Authority and all the Horse Barn partner tenants are thrilled and honored to be able to offer this space as a resource and amenity to the Curtis Park neighborhood, to the broader Denver community, and to all who share our collective missions to work toward access and opportunity for all people, the world over.