For the fourth time in the past five years, Denver County has led the state in population growth according to the US Census Bureau. The Census Bureau’s recently released 2012 population estimates show that Denver County (the City and County of Denver) had a population of 634,265 on July 1, 2012, an increase of 14,980 over their July 2011 estimate of 619,285. Denver’s 2010 Census population count was 600,158. 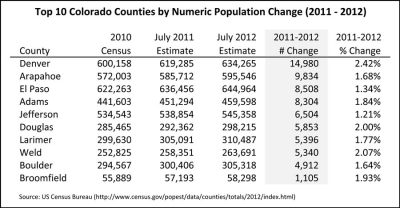 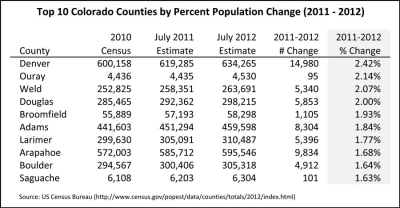 Denver’s gain in population is due primarily to several factors: the ongoing development of large infill sites like Stapleton and Lowry, the buildout of the city’s few remaining greenfield communities like Green Valley Ranch and Gateway, and the substantial densification and infill developments occurring with the city’s urban core. As noted in my recent post on Downtown Denver’s multifamily housing boom, over 6,000 residential units within the Downtown Denver area have been completed or are under construction since 2012, and over 10,000 residential units were completed in the Downtown area during the 2000s.

Finally, let’s take a look at the ten central/northern Front Range counties (Adams, Arapahoe, Boulder, Broomfield, Denver, Douglas, El Paso, Jefferson, Larimer, and Weld), which account for the vast majority of the numeric population growth annually statewide over the past twelve years. In the chart below, I’ve tracked these ten counties based on their Top 10 statewide ranking by annual numeric population gain. Population figures used for 1990, 2000, and 2010 are the actual decennial census counts. All other years represents the US Census Bureau’s intercensal estimates, except for 2011 and 2012, which are from the just-released 2012 postcensal estimates. The missing values reflect annual ranking positions where Eagle, Fremont, Garfield, Mesa, and/or Pueblo counties entered the Top 10. If a county’s colored marker disappeared, that means it wasn’t in the Top 10 statewide for that year (click to embiggen): 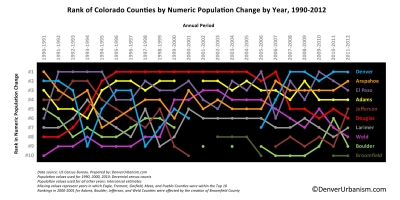 A few trends are evident:

Douglas County ascended as the county with the highest population growth in the state from the mid-1990s through the mid-2000s. However, since the 2008 recession, the county’s growth has noticeably slowed.

Adams, Arapahoe, and El Paso counties have generally maintained a steady presence at or near the top of the chart, with some periodic ups-and-downs, over the past 12 years.

Weld County, which didn’t become a significant growth leader until the early 2000s, has also experienced a growth slowdown like Douglas County since the 2008 recession.

Boulder and Larimer counties show steady growth, but consistently in the bottom half of the Top 10.

Jefferson County saw a dramatic slowing of growth in the 1990s and early 2000s, but is making a bit of a comeback of late.

The Denver metro area generally slowed in growth during the “dot com” mini-recession of the early 2000s, during which some of the non-Front Range Counties occupied slots within the Top 10.

Denver County saw erratic but generally strong growth during the 1990s as the city’s renaissance started taking hold, but then disappeared from the Top 10 for several years during the “dot com” bust days, only to reappear and occupy the top slot statewide for four of the past five years.

In conclusion, Colorado’s Front Range continues to show steady growth in the post-recession era, with the most urban counties showing the strongest population growth.