How Historic Streetcars Made the Denver of Today More Walkable

This is the final post in a four-part series on Denver’s streetcar legacy and its role in neighborhood walkability. For the introductory post, click here. To get the most out of this post, I recommend taking a look at my app and selecting the Streetcar Neighborhood Walkability section in its sidebar.

Picking up where my last post left off, I wanted to see how the Streetcar Neighborhood Commercial Developments (SNCDs) affected the walkability of Denver’s neighborhoods. There are many ways to measure walkability but given my focus on SNCDs I wanted to focus on proximity to destinations that could conceivably be located in an SNCD. I came up with seven destination categories: retail, grocery stores, restaurants, services, convenience stores, entertainment, and schools/daycares. I used NAICS codes to download their locations from Esri Business Analyst.

So how did I measure proximity to these neighborhood destinations? I used a GIS technique called network analysis to answer the following question: how many destinations are located within a one-half mile sidewalk distance from each parcel in the city? I ran this analysis one destination category at a time and appended the results to each property parcel. Additionally, for each parcel, I added up the number of categories where at least one destination was accessible and called the metric “sum of categories”. All of this data curation and analysis was complex and time consuming, so I limited my area of study to a neighborhood in the northwest part of the city of Denver. I would eventually, however, like to expand it citywide.

The study area is divided into two tracts, a northern one and a southern one. The northern tract is much better provisioned with SNCDs than the one to the south. In its heart, it has an Exceptional Main Street and a Quality Cluster on W. 32nd Avenue and there are also more SNCDs just beyond its boundaries. The southern tract has only a Corner Store, and fewer SNCDs close by. There are also many business nearby both tracts on arterial roads, but neither tract has a major advantage in terms of access to them. 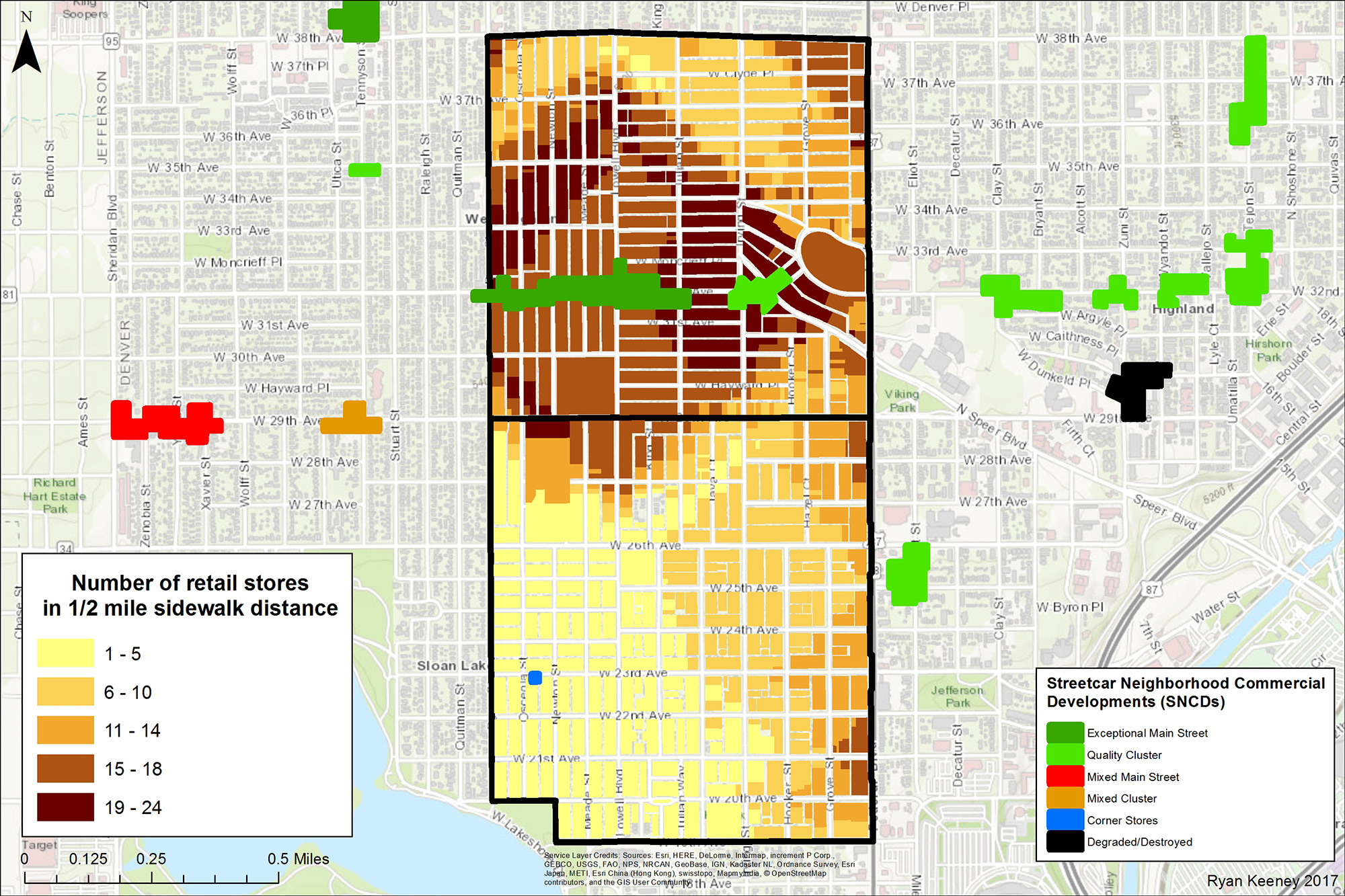 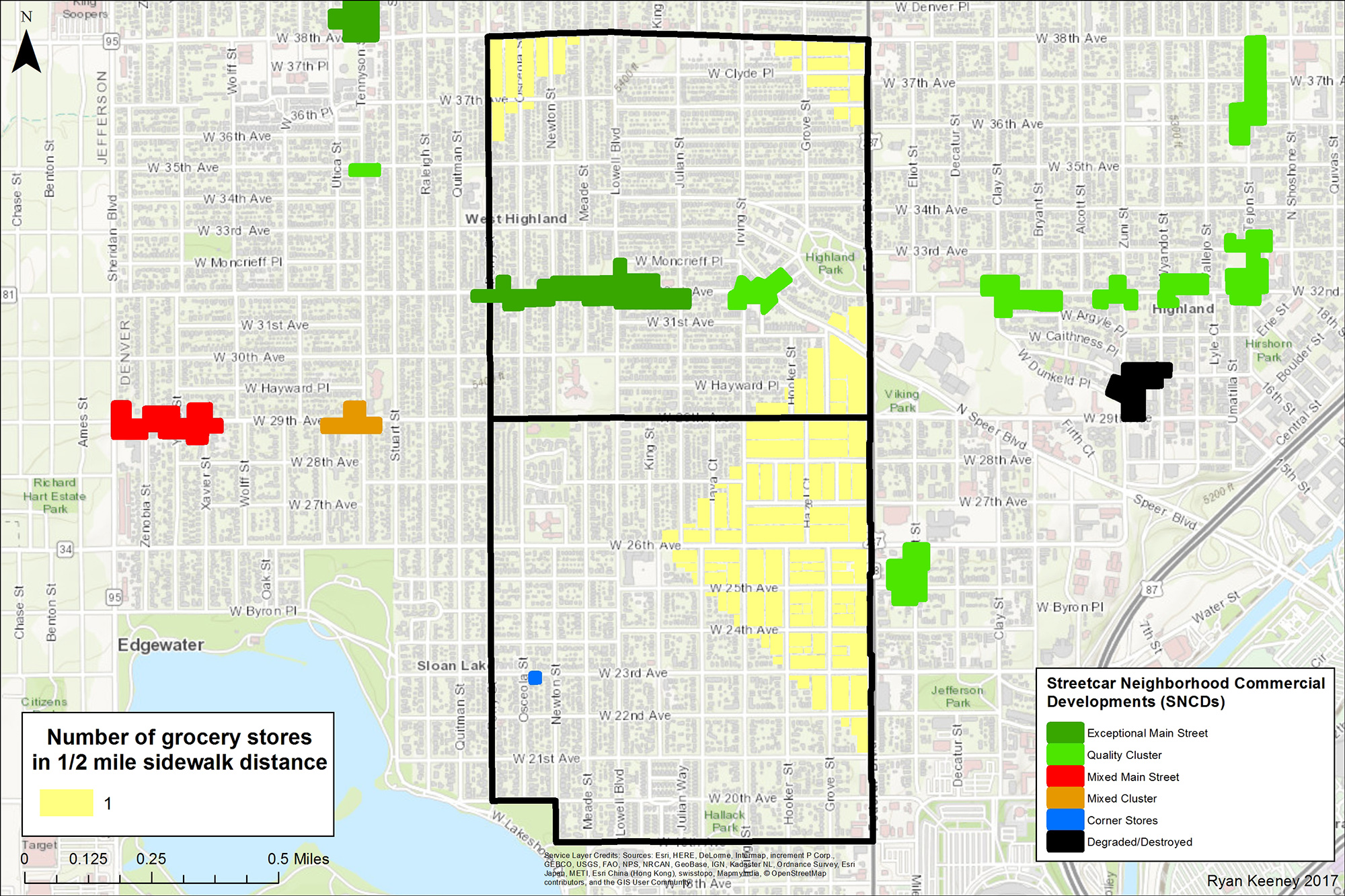 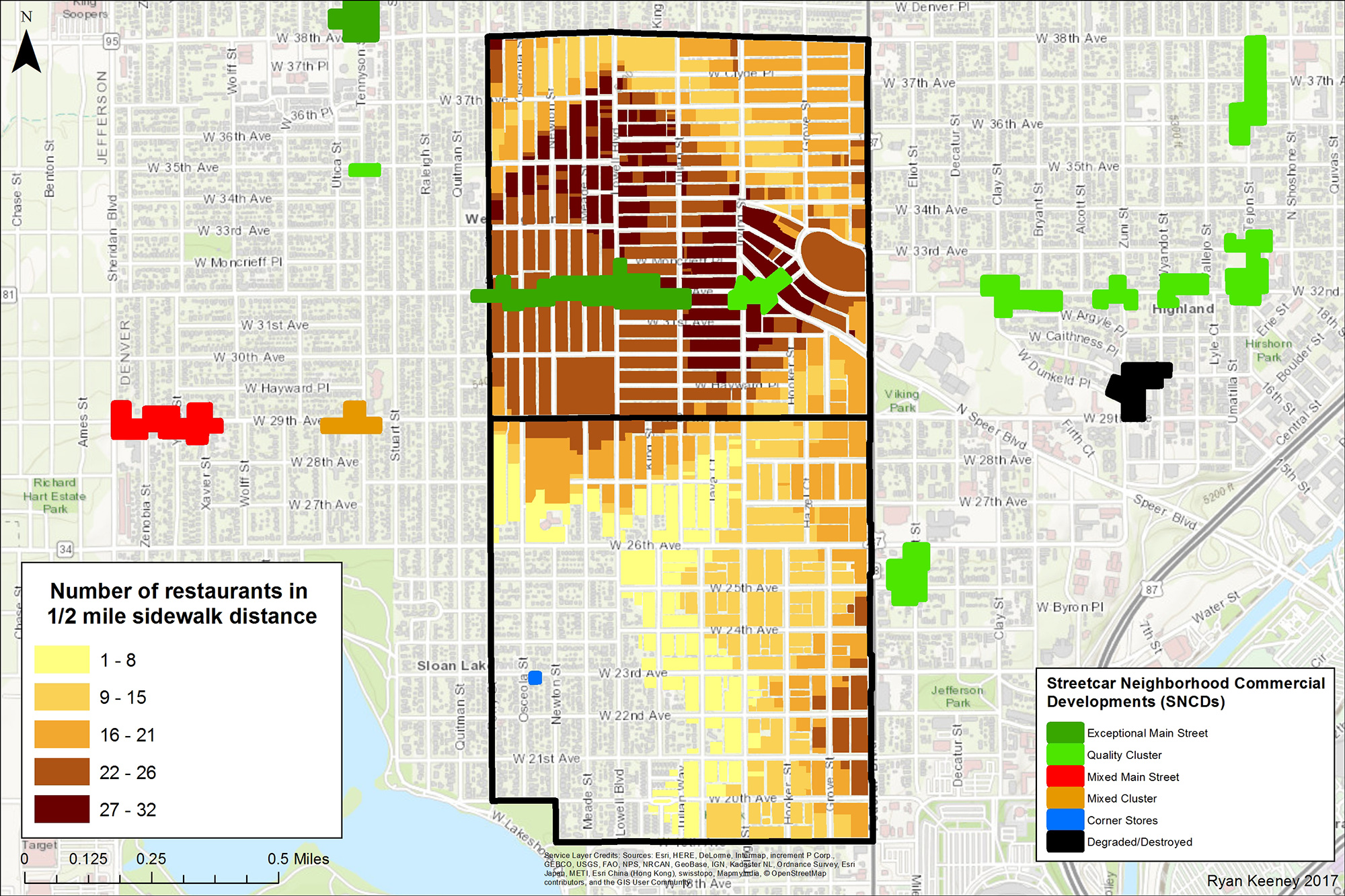 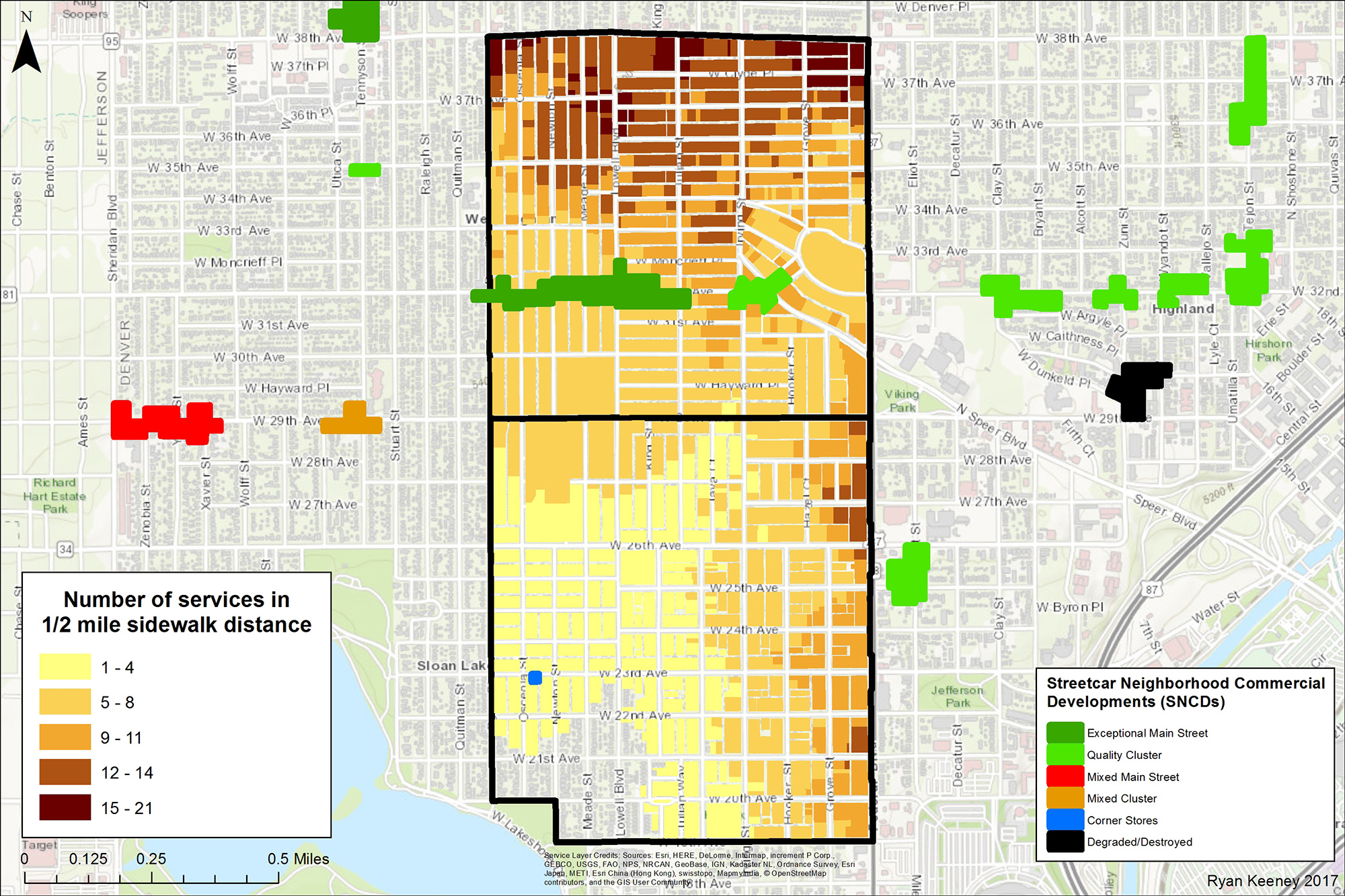 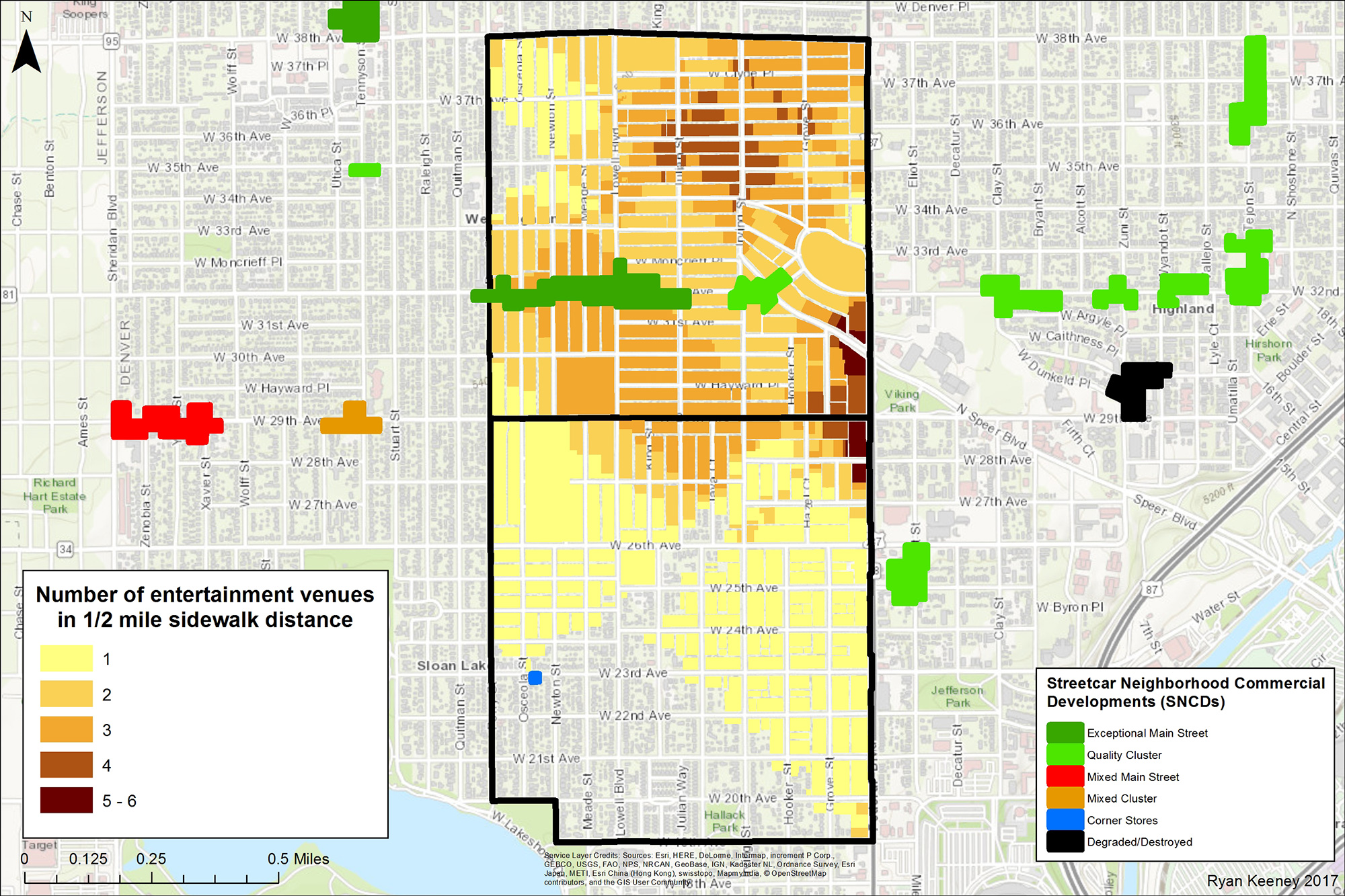 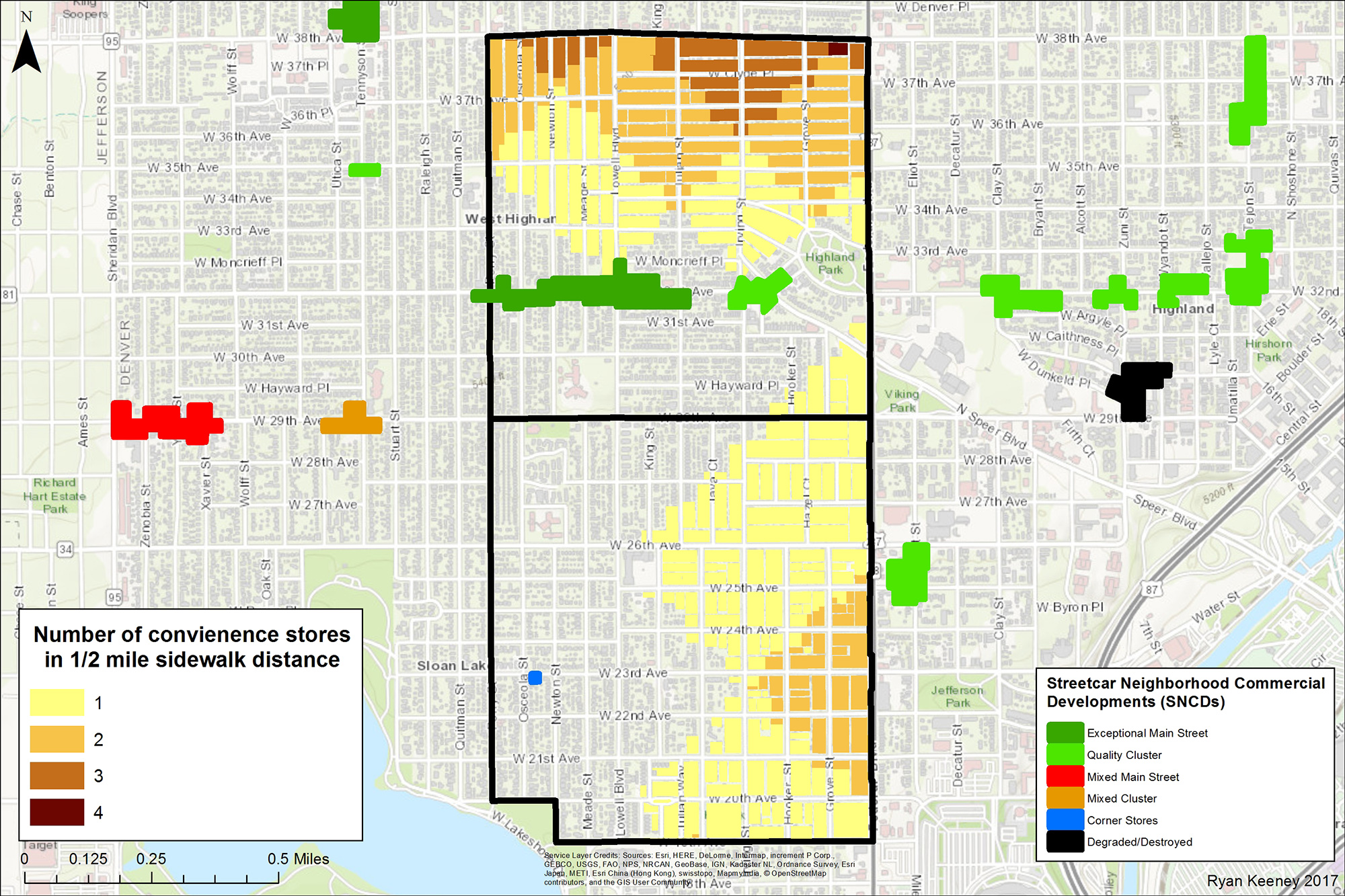 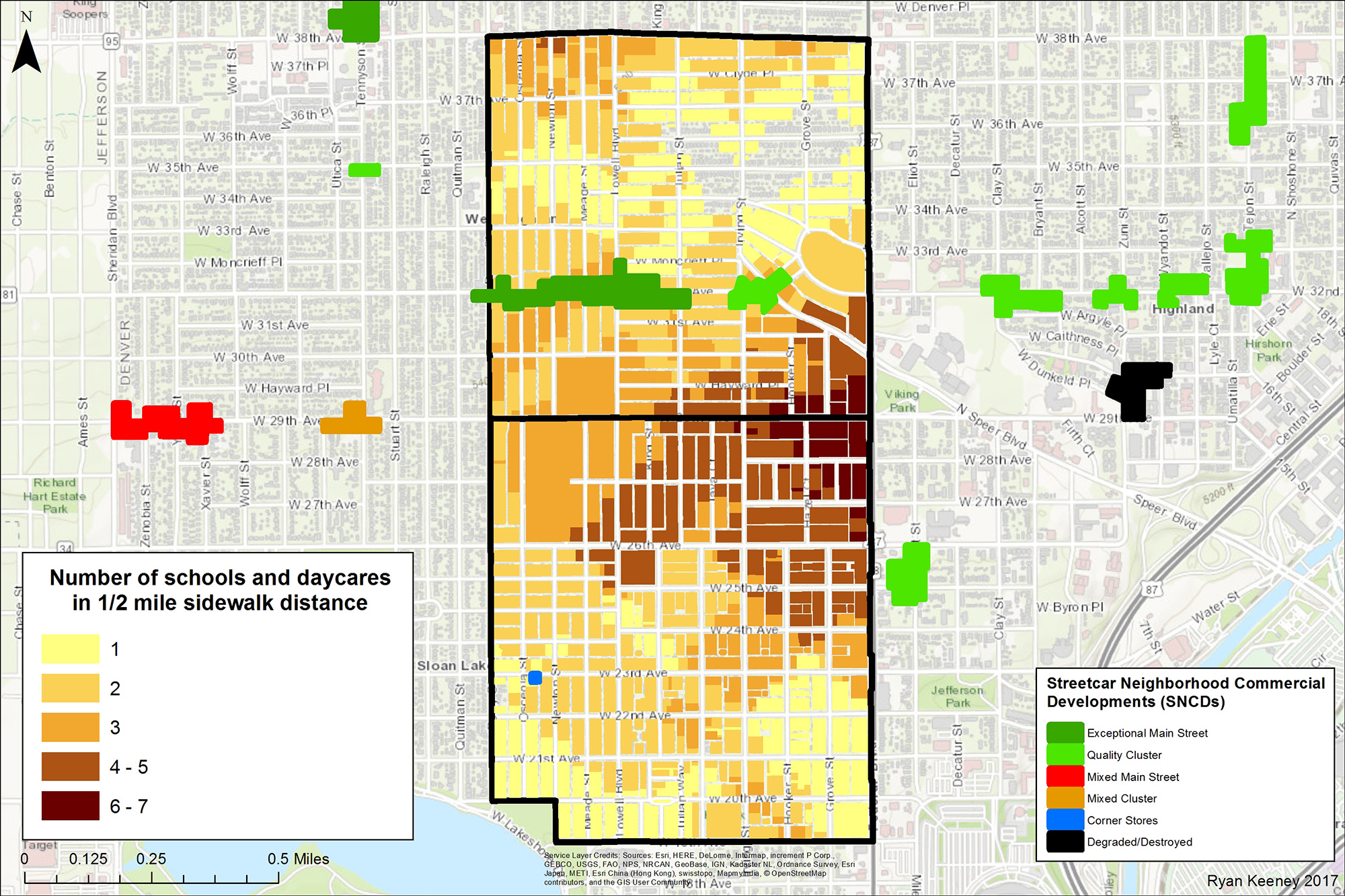 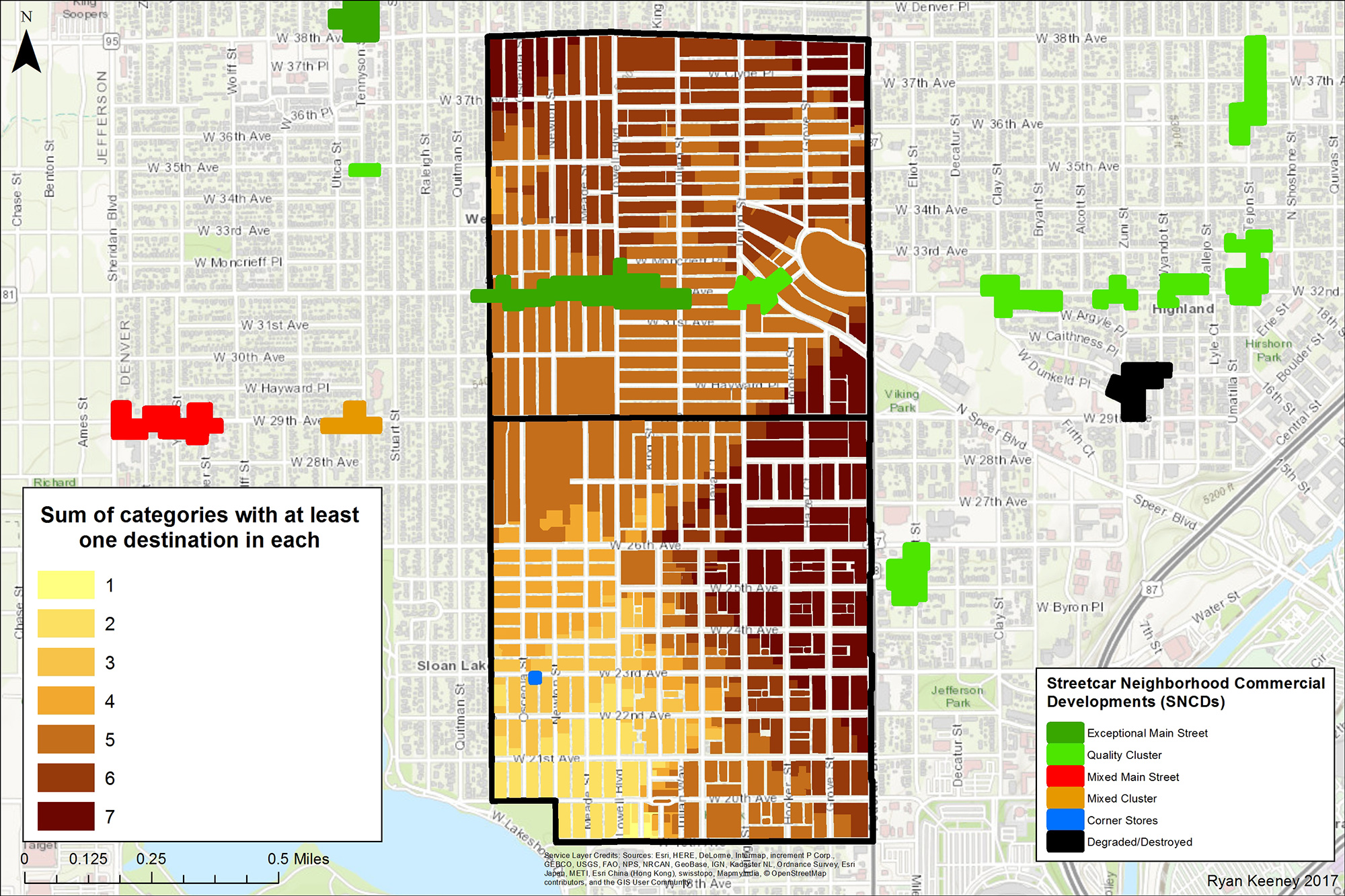 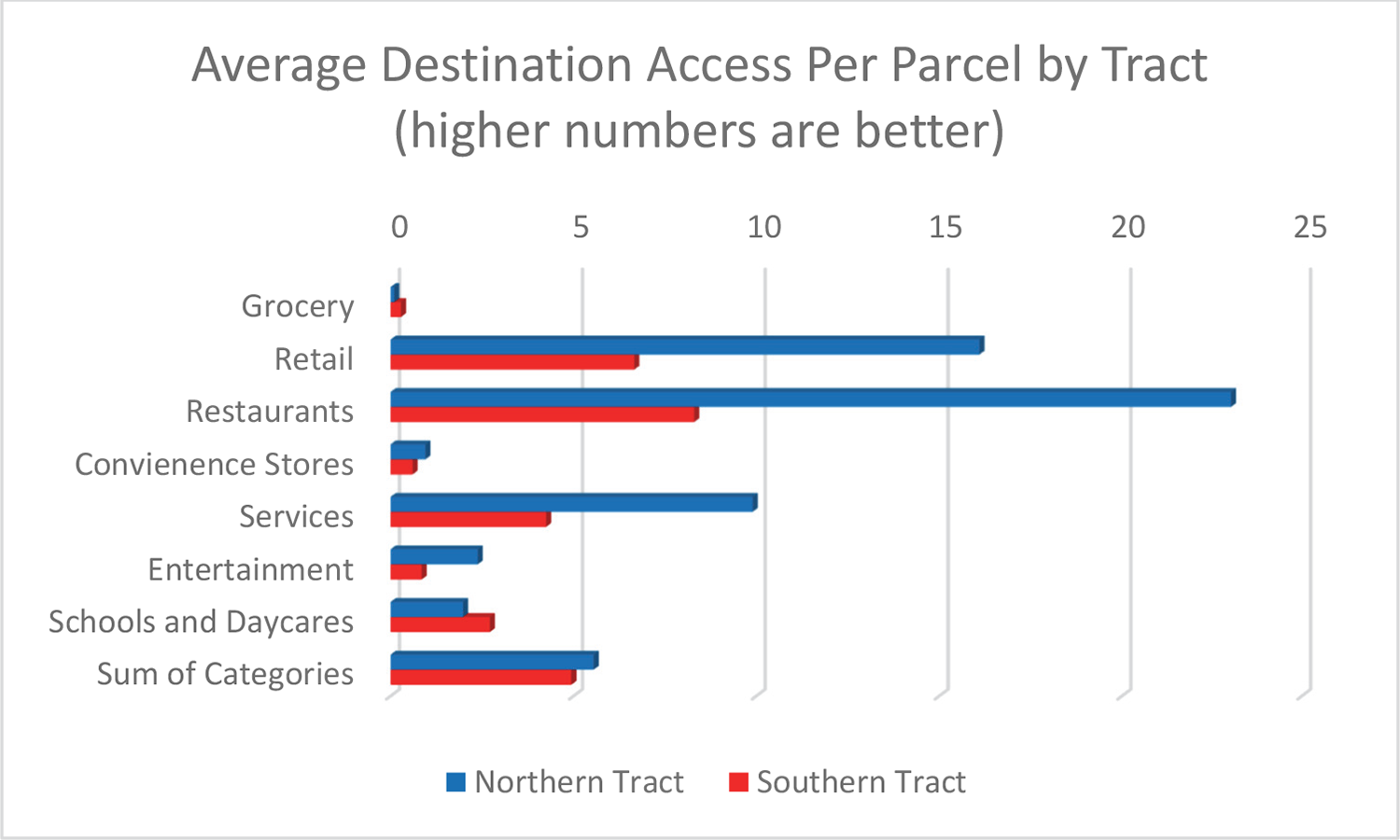 It is likely that this picture looked significantly different during the heyday of the streetcar. Restaurants, retail, and services currently dominate the composition of the SNCDs, and you will notice that there are very few grocery stores. Small, “mom and pop” groceries were once much more prevalent but today, these have generally consolidated into auto-centric big box stores. Even so, as can be seen in my results, there is still plenty of value generated by the SNCDs. They bring many destinations and workplaces into close walking distance of residences and serve as valued neighborhood centers by the residents around them.

So that’s a wrap on the walkability analysis and this series of posts on my master’s capstone. Essentially the big theme of this project is that we can learn from our past and leverage its legacy to plan for a better, more multi-modal way of life. Denver was once a city without cars and people were able to get around just fine. They walked, they rode streetcars, and they went about their errands by patronizing local neighborhood shopping districts. Since that time the Denver metropolitan area, like the rest of the country, has grown to be more car oriented. The suburbs, where most people live today, were built around the car. You essentially need to own and operate this expensive, dangerous, multi-ton piece of machinery to go almost anywhere in these areas.

Denver proper fares better because of the legacy the streetcar left behind. Most of the city was developed before the automobile and despite the later intrusion of highways and the reconfiguration of streets to accommodate more cars, the inner city is built on a tight grid and its neighborhoods are more densely populated and mixed use. Not every neighborhood is a walking and transit paradise, but most of them have the bones to become one.

In this Story Map application, I have curated a lot of information about the history of Denver’s streetcars, their legacy in the form of pedestrian-friendly commercial districts, and the impact those districts have on the walkability of one of its neighborhoods. It is my hope that it presents Denver in a new light to many people and helps us get closer to the goal of creating a city where the car is no longer a necessity of life for the majority of its residents.