Civic Center Park: The Evolution of a Grand Public Space

In 2012, Denver’s Civic Center Park became the city’s first National Historic Landmark. It has a lot to brag about. Built under Mayor Robert W. Speer (yes, that Speer), the park offers pristine structures and plenty of green space in an iconic location at the heart of downtown right next to the Colorado Capitol and the City and County of Denver building. It epitomizes the City Beautiful movement which can trace its popularity to the 1893 Chicago’s World Fair, where Mayor Speer got the idea to construct the park. The only problem? Something was already there.

In fact, there were a lot of somethings there. The capitol building was constructed in the 1890s, although the historic dome wouldn’t be finished until 1908. There was also the McNichols Civic Center Building, which opened in 1907 as a Carnegie Library. In addition to these structures, there were two full city blocks filled with shops, homes, and other buildings. Early maps tell quite a story. Across the street from the capitol there were businesses of all kinds. A cigar factory was located on Broadway, as was an ice cream factory. Hotels dotted the area. A school of art was off the alley between Broadway and S. Fifteenth Street, which continued directly south and paralleled Broadway before the park was built. It is now Acoma Street. On Cortland Street, which ran east/west between Colfax and 14th Avenue and no longer exists, there was a livery and several houses, and a drug store held a piece of prime real estate on the southwest corner of Colfax and Broadway.

Below are scans of two early maps showing the blocks between Bannock Street (labeled as S. Fourteenth) and Broadway, from Colfax to 14th Avenue, where Civic Center Park is today. The first image shows cropped parts from Sheets 6 and 20 of the Sanborn Fire Insurance Map from 1890, courtesy of the University of Colorado Boulder Library. Colfax Avenue wouldn’t be curved around the park for nearly thirty more years. The second image shows a cropped part of Plate 13 from the Baist Real Estate Atlas and Surveys of Denver from 1905. As can be seen in the 1890 map, a boarding house once stood at the southeast corner of Colfax and Bannock. By the 1905 map, the Carnegie Library (today’s McNichols Building) was shown. 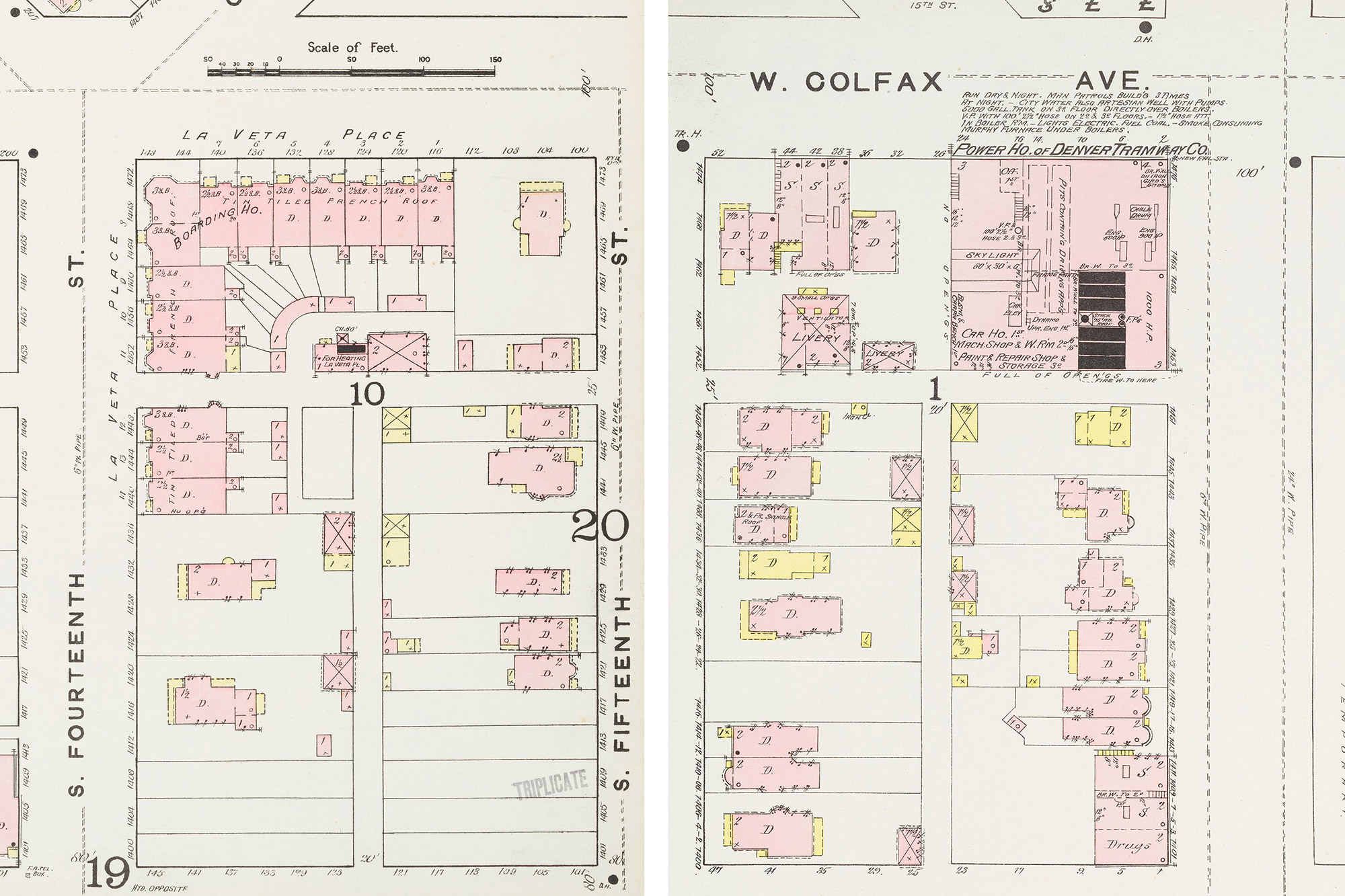 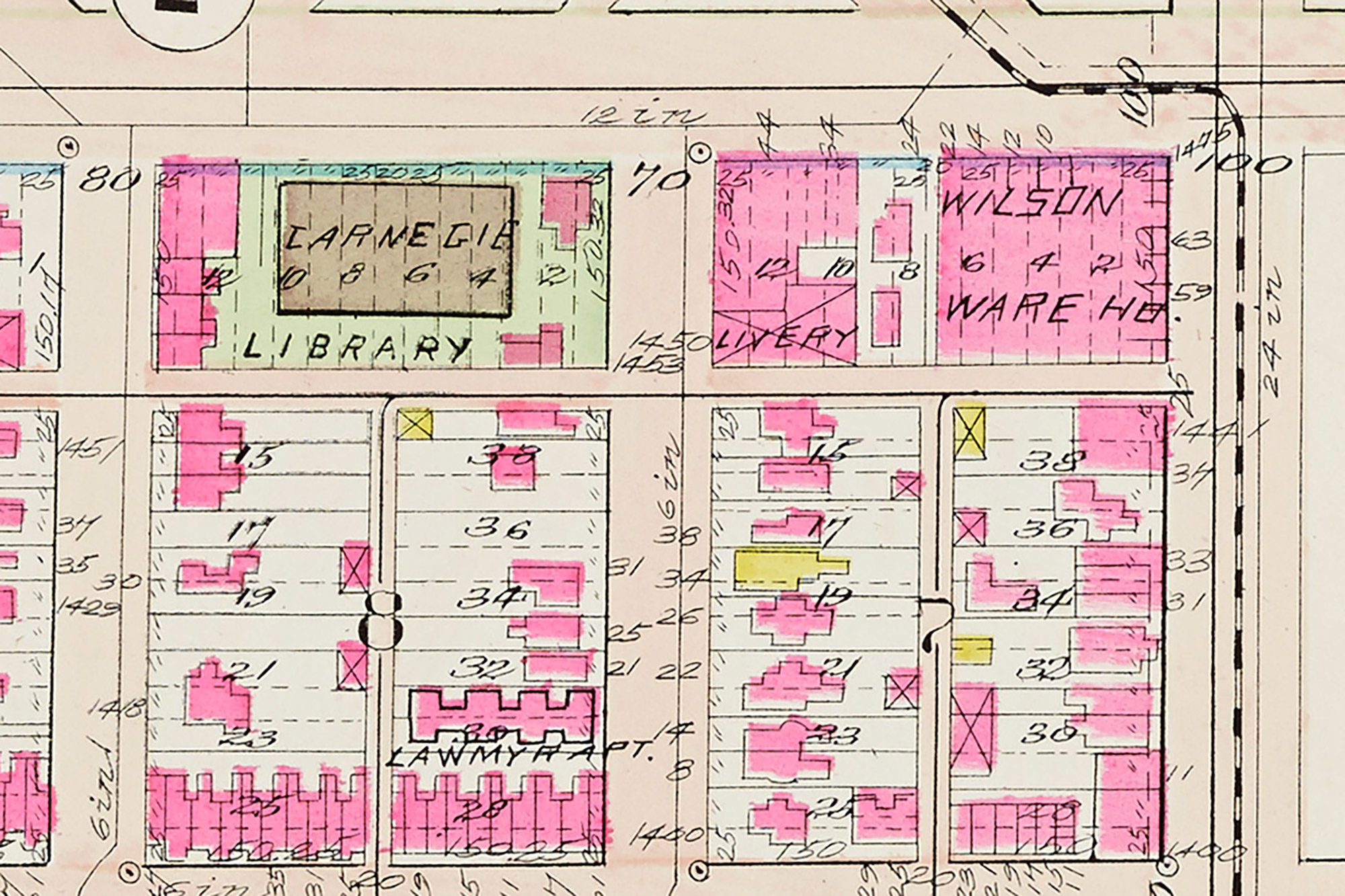 In 1904, Mayor Speer was elected to the office for the first of three terms. He immediately proposed plans for a civic center park, and some projects started. A plan to extend 16th Street to the capitol building was called for but defeated. By 1912, nothing had happened, and Mayor Speer lost reelection, thus killing the plan… until Mayor Speer won his third term in 1916. Work on the park began immediately and everything between Broadway, Bannock, Colfax, and 14th Avenue was razed.

Below are photos of today’s McNichols Building, the only building on the two city blocks that survived, and the Civic Center Park’s ample green space and many monuments. 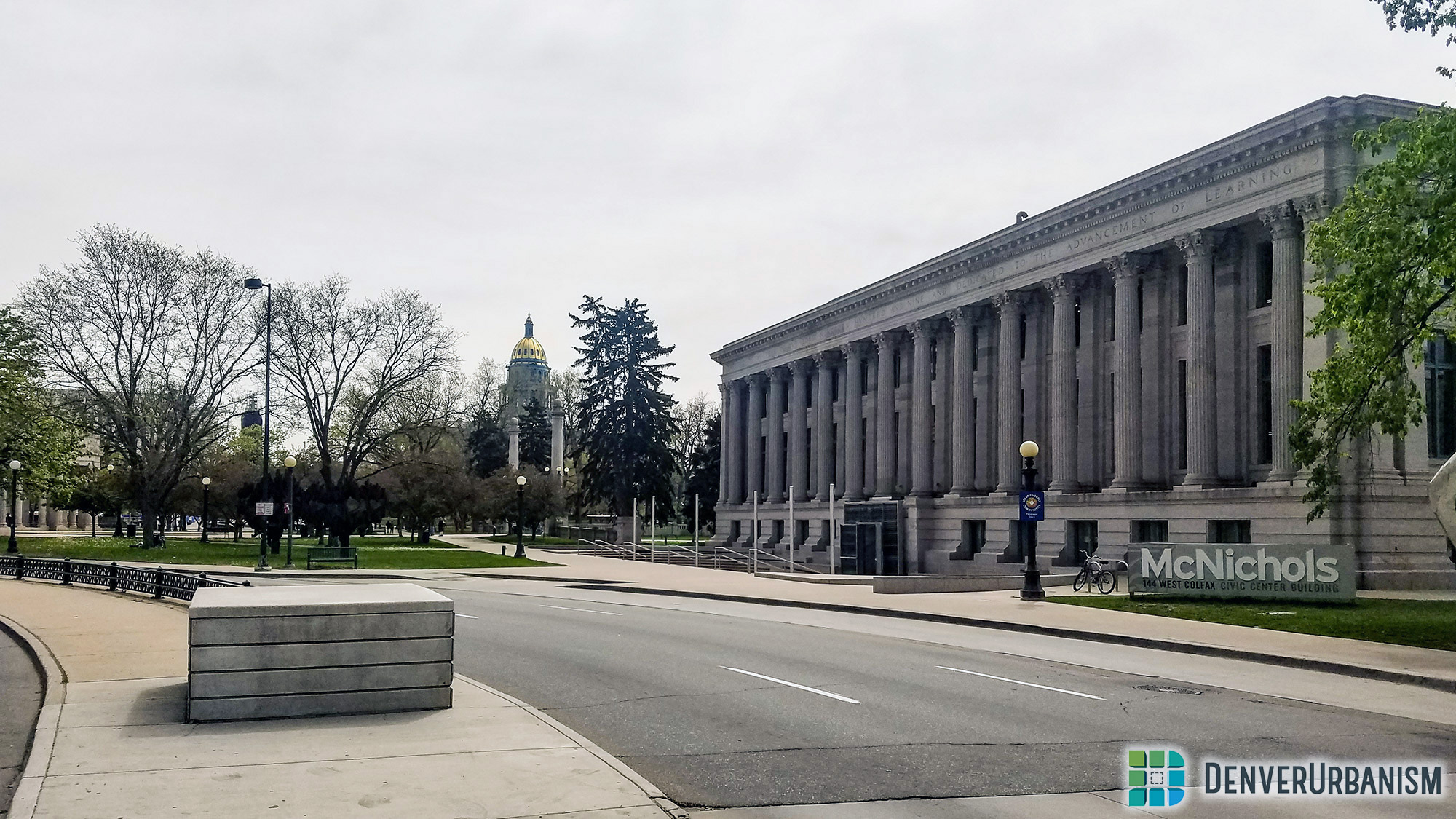 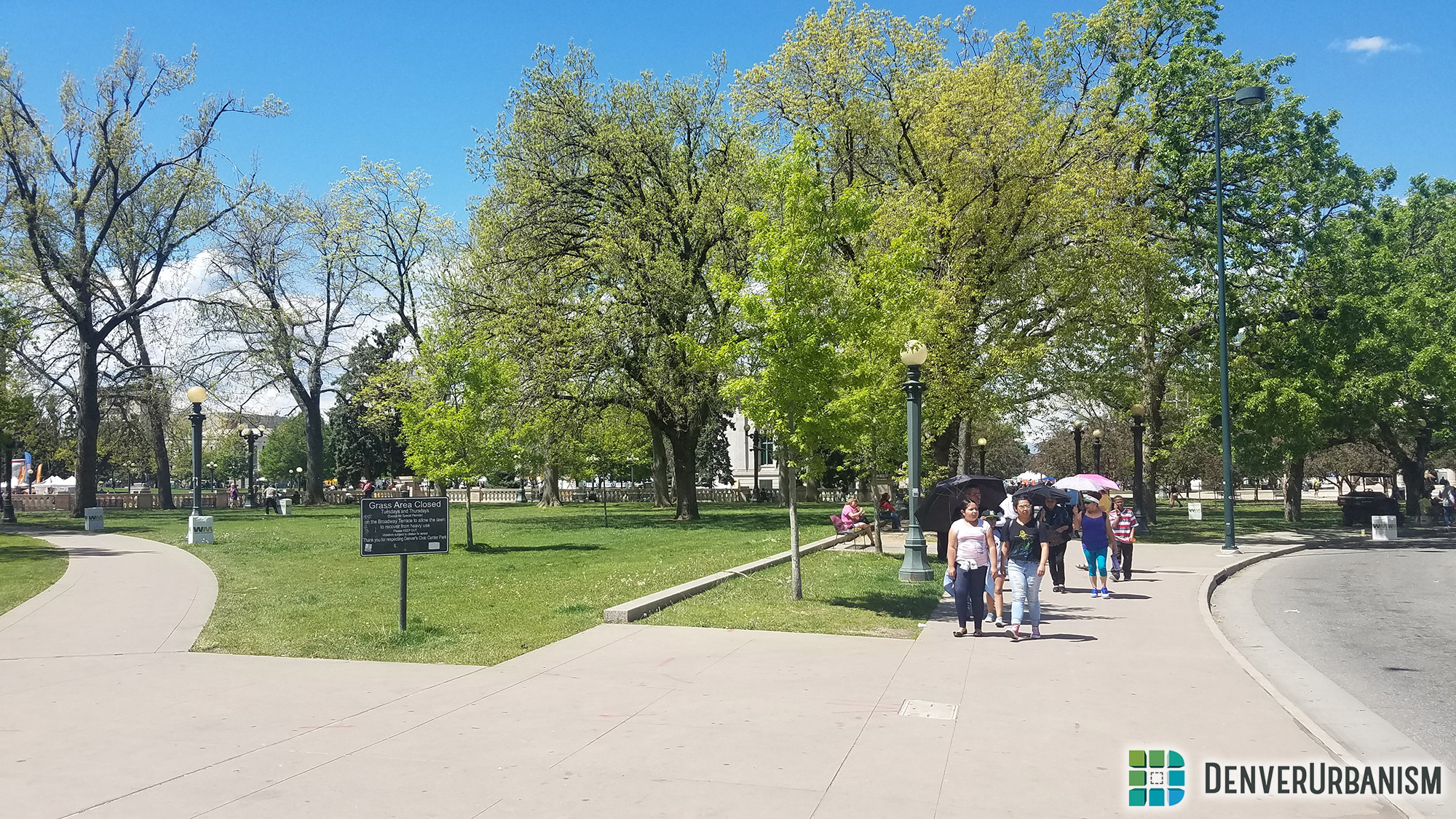 By 1917, Mayor Speer and the City of Denver had their park. This beautiful park connected the Colorado Capitol building to…nothing. The City and County Building didn’t begin construction until the mid-1920s, and Mayor Speer, who spent nearly 15 years championing the park, passed away from the flu in 1918.

Today, the park offers great views of the Colorado State Capitol and the City and County of Denver Building. The streets around the park are often closed for festivals and events, allowing pedestrians to roam freely around the neighborhood. 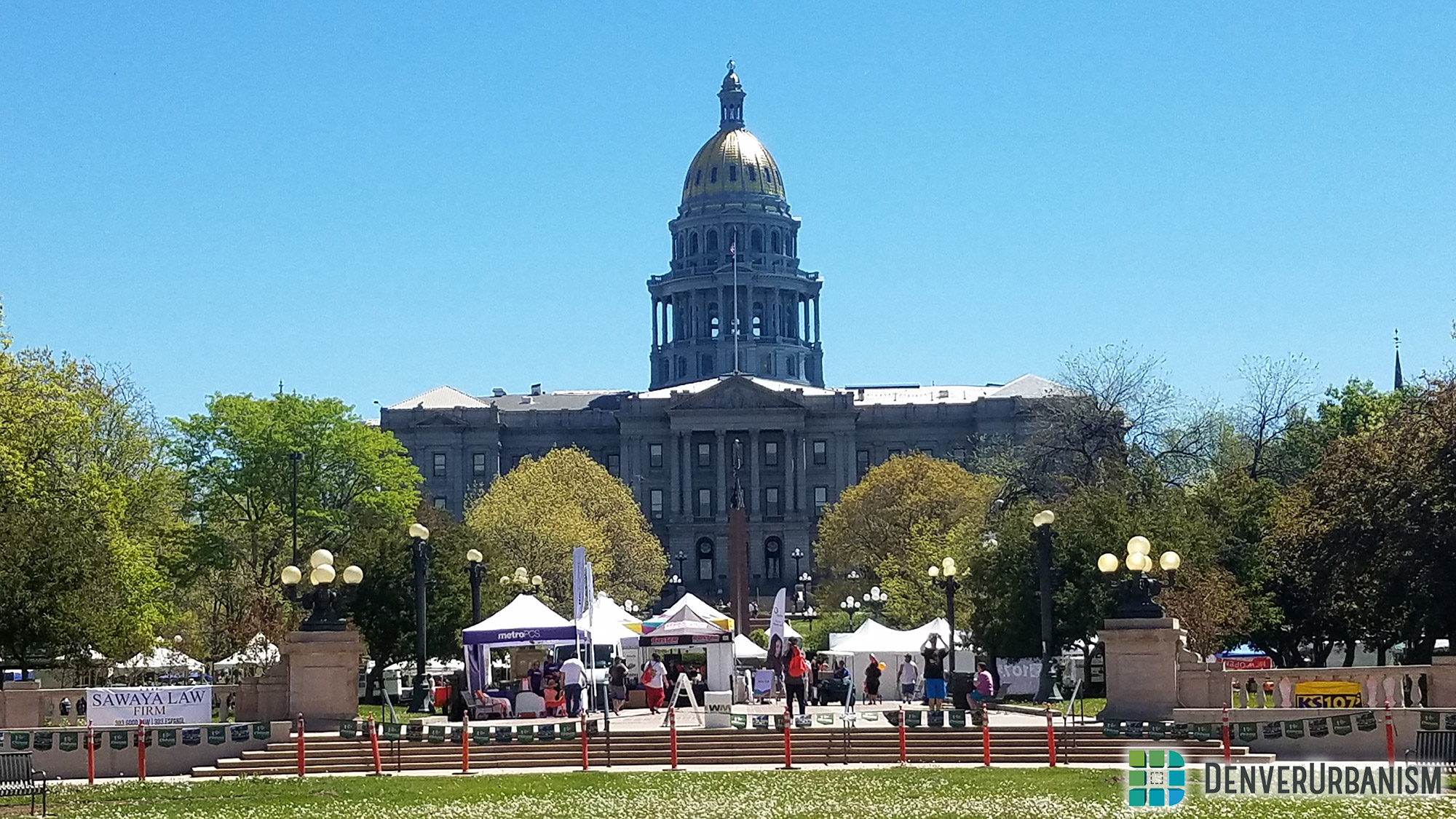 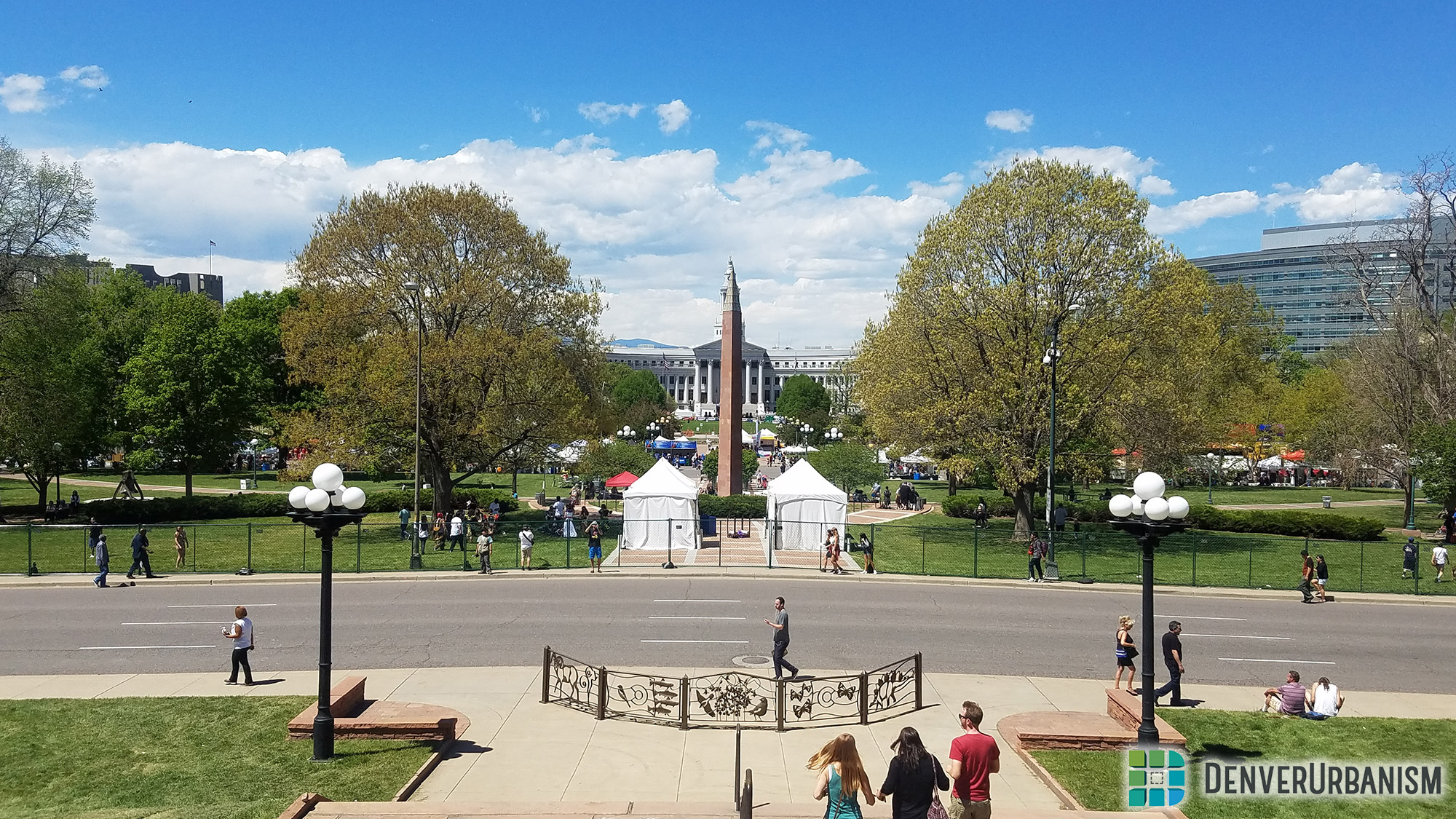 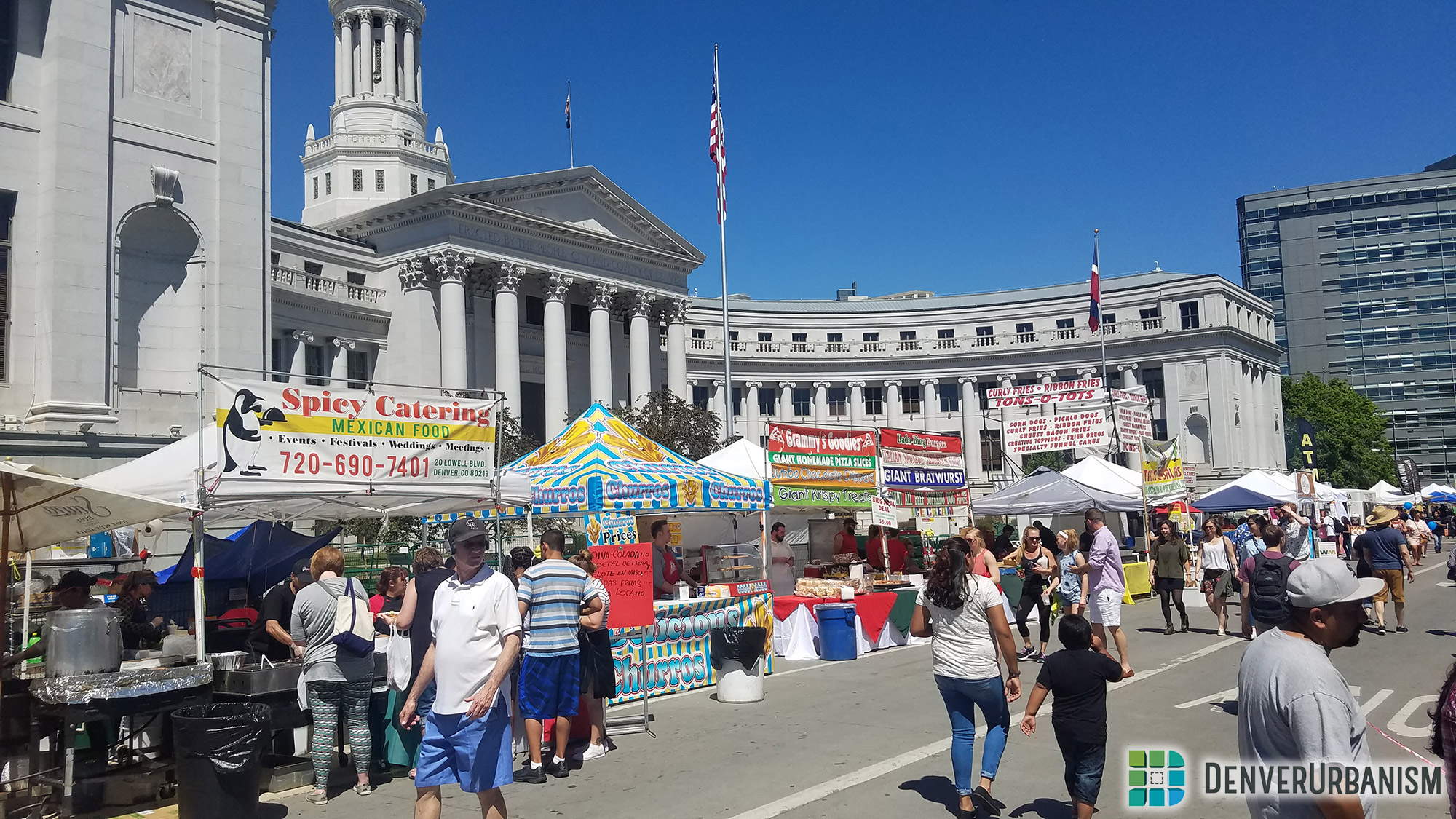 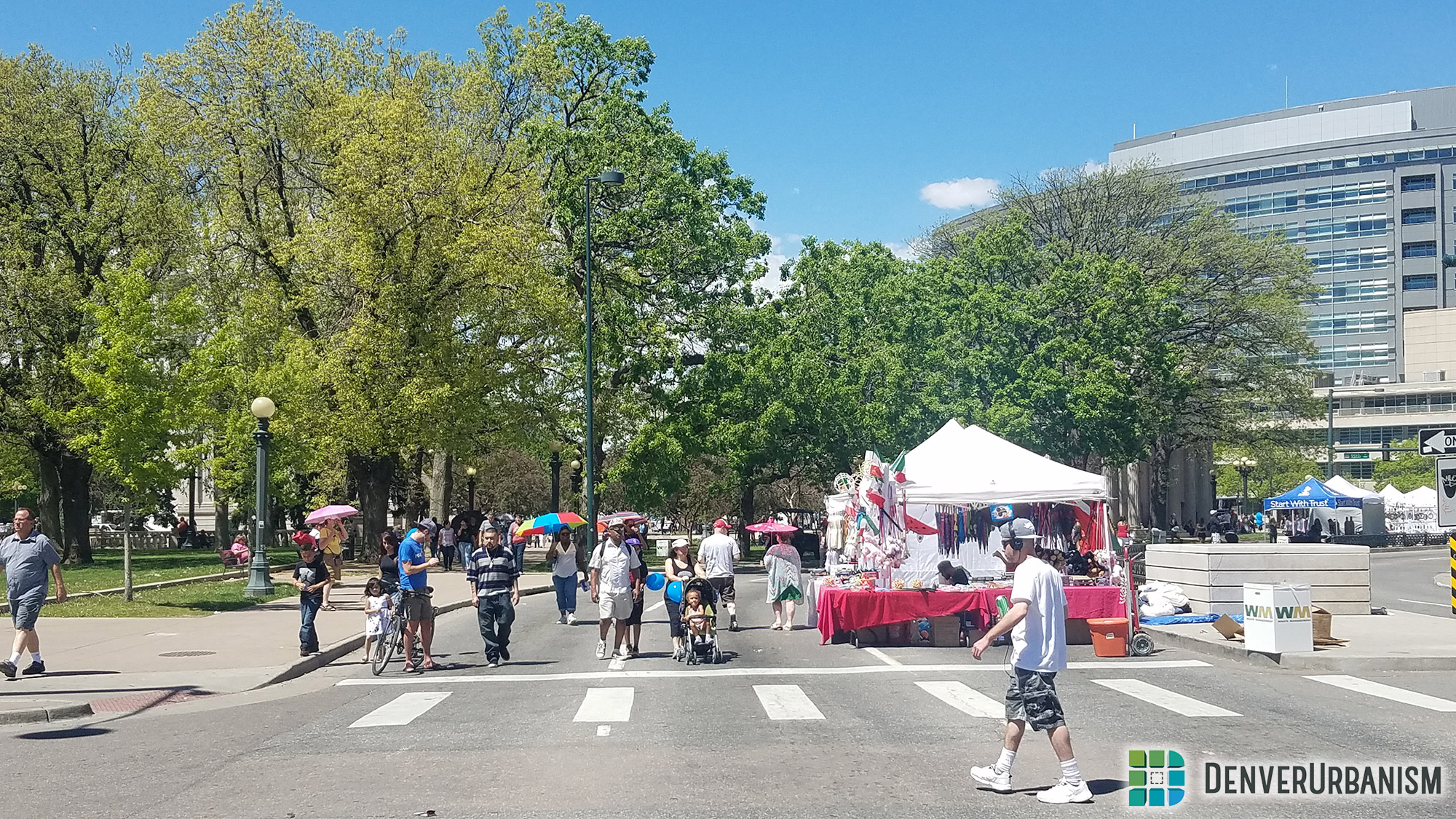 Had Denver forgone Civic Center Park, there is no telling what might be there now. The benefits of the park can easily be seen, with the Library, the Art Museum, and the Colorado Supreme Court all adjacent to it. Nonetheless, many of the homes and buildings that were torn down would now be considered historic landmarks of their own, but only if they survived the backhoe in the 1960s and 1970s when Denver tore down half of downtown in the name of urban revival.

The Cinco da Mayo Festival is one of many events which are held in and around the park throughout the year. The Voorhies Memorial serves as the north entrance to the park and as the gateway to Downtown Denver. 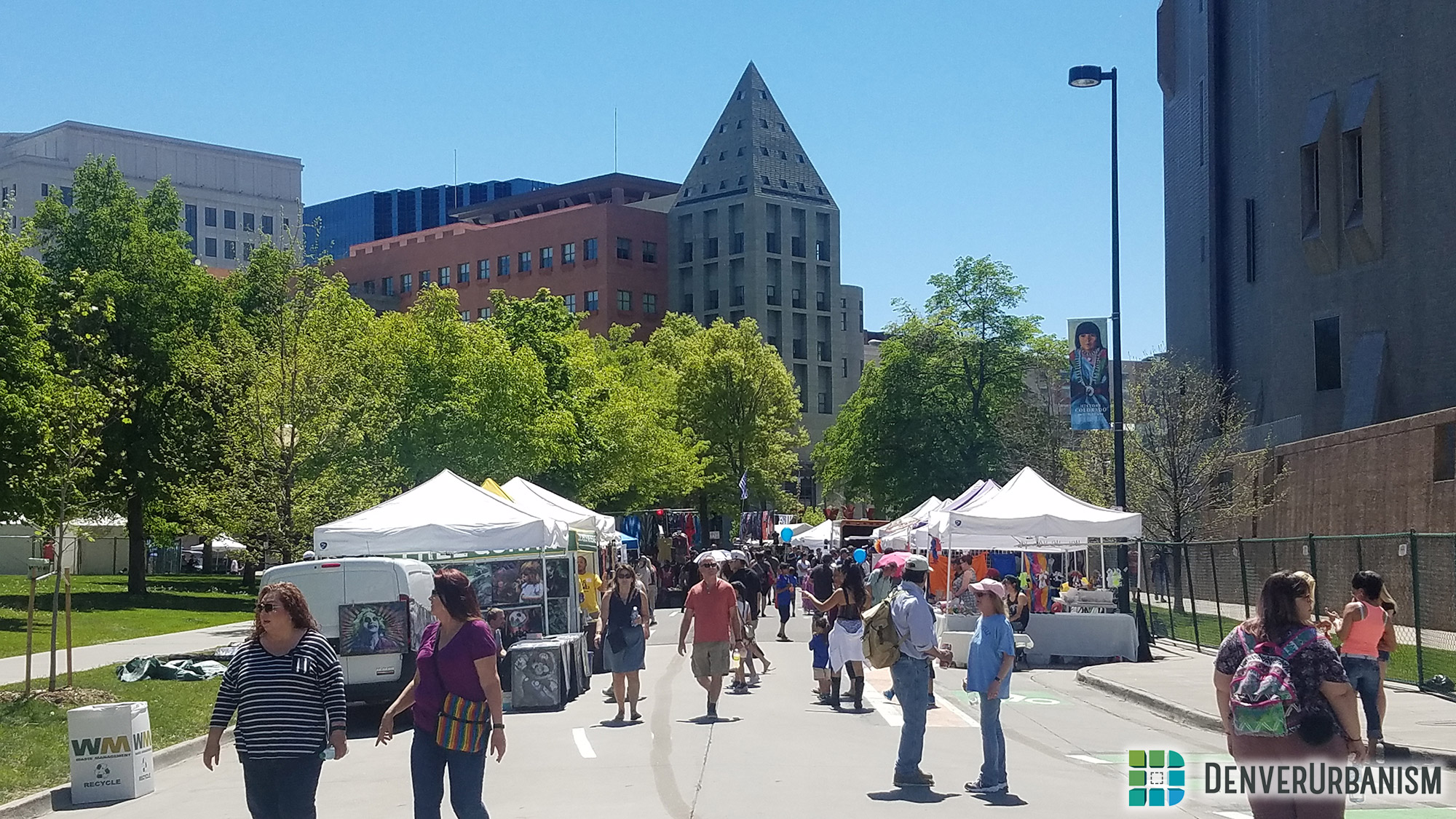 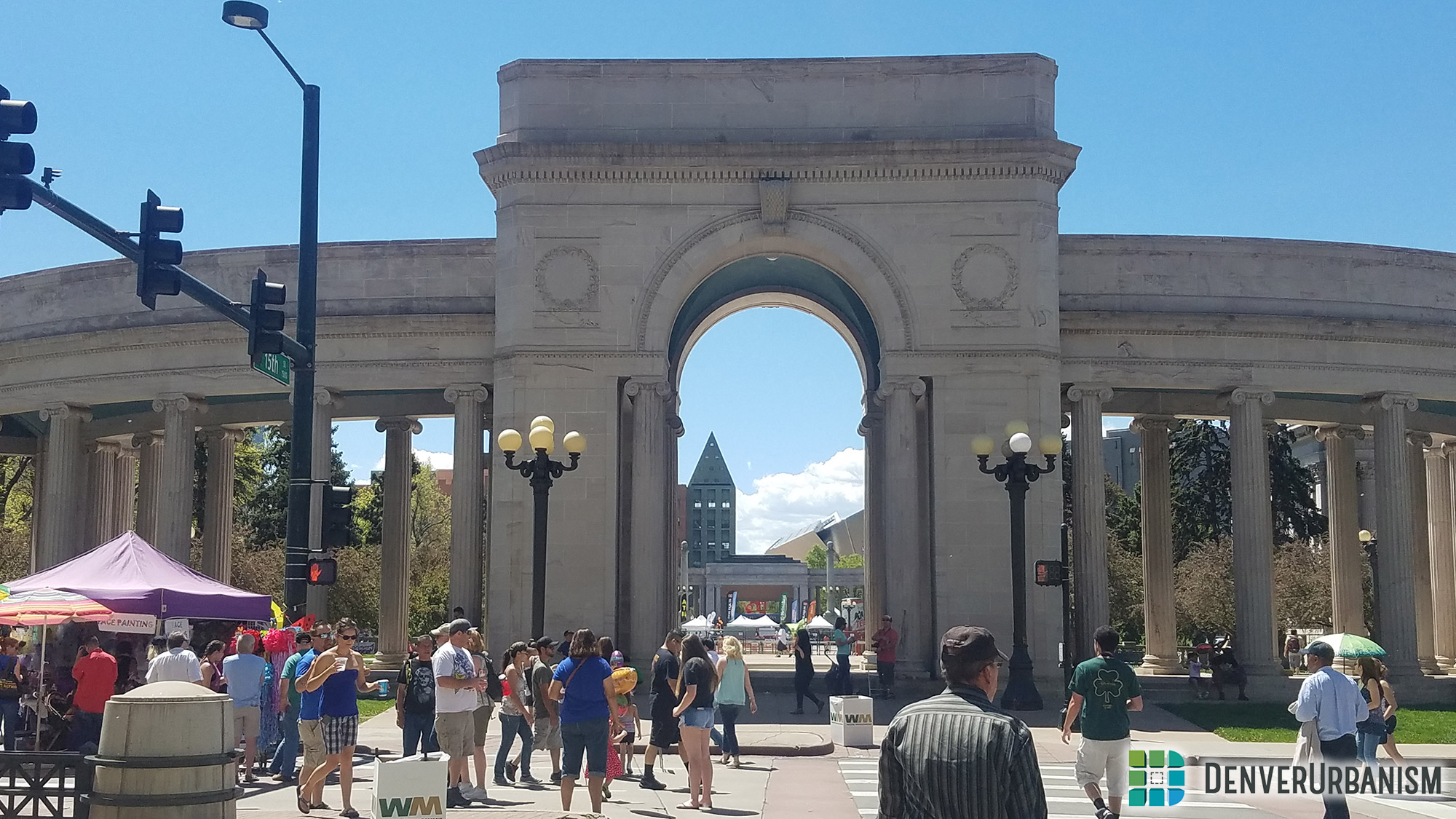 Now the park offers plenty of space and panoramic views. The blocks to the west of the park have become a government center and, to the south of the park, multiple museums and the main branch of the Denver Public Library offer a lot for residents and visitors to enjoy.

Kyle Dobbins is a resident of Capitol Hill and, after teaching music for three years, he studied urban geography at CU Denver. Originally from the Columbus, Ohio area, he moved to Denver in 2012 after living in Wyoming for six years. His focus is on transportation planning and historical urbanism. He teaches music for Denver Public Schools and has remained active in the urban planning community in Denver.