If there was ever an artist that made his mark on Denver, it was Vance Kirkland.

On November 6, Kirkland (who died in 1981) continued to cause a stir in the streets of downtown Denver as his physical studio—which was built in 1910 and part of the Kirkland Museum of Fine and Decorative Art—was precariously lifted and moved from its residence at 13th and Pearl in Capitol Hill to its new, permanent location in the Golden Triangle neighborhood at 12th and Bannock.

Image below: Former location in Capitol Hill of the relocated Kirkland studio. 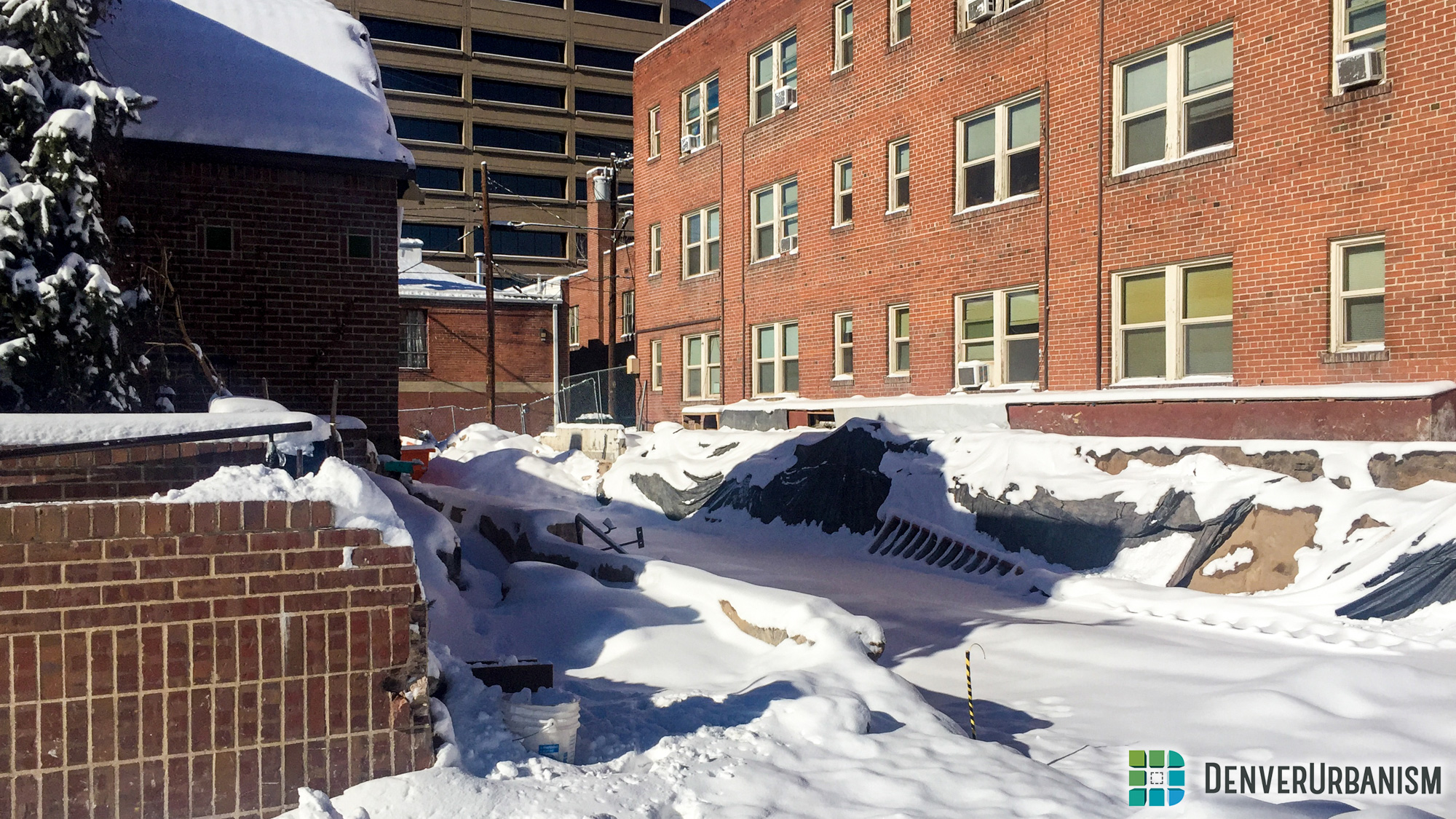 While to some, Kirkland’s perceived impact may be confined to art enthusiasts familiar with his work, or those educated in Colorado history, the Kirkland Museum is a greatly-respected and unique art institution in Denver, and important to the history of art in the city itself. The arrival of the relocated studio and expansion of the museum in its new space, which is set to open in late 2017, signifies a continued growth of and commitment to Golden Triangle as the neighborhood most representative of museum culture and renowned architecture in Denver.

Kirkland, who arrived in Denver from Ohio in 1929, worked in five different art periods during his career, including realism, surrealism, abstract expressionism and “dot” paintings, a technique which he invented. By the end of his career, he became one of the most significant artists the Rocky Mountain region had ever produced. Kirkland was also responsible for founding the University of Denver’s art program prior to starting his own art school in what is now his recently-moved studio. The Kirkland Museum, which opened in 2003 by converging a second building with this studio space, hosts a collection of more than 1,000 of Kirkland’s works, alongside more than 30,000 artworks by other artists. This significant and growing collection prompted the museum’s expansion and relocation.

His studio, a 1,384 square-foot building designed in arts and craft style-architecture—a movement known for traditional and simplistic artistry that often incorporates folk and floral motifs—was famously chocked full of painting supplies, records and most notably, ceiling-hung straps that allowed Kirkland to hover over his canvases to paint. Everything in the studio moved to its now-current location in Golden Triangle, where it will be joined by a new main building that is part of the expanded museum, which is being designed by prominent Seattle-based architecture firm, Olson Kundig. The building’s architecture will be most notable for its shiny, yellow-colored central corridor made of mosaic and glass panels, which will utilize a vertical orientation similar to those of its minimalist and organically-derived neighbor, the Clyfford Still Museum, devised by Portland and New York-based Allied Works Architecture.

Image below: Relocated studio now rests adjacent to the new museum building under construction in the Golden Triangle. 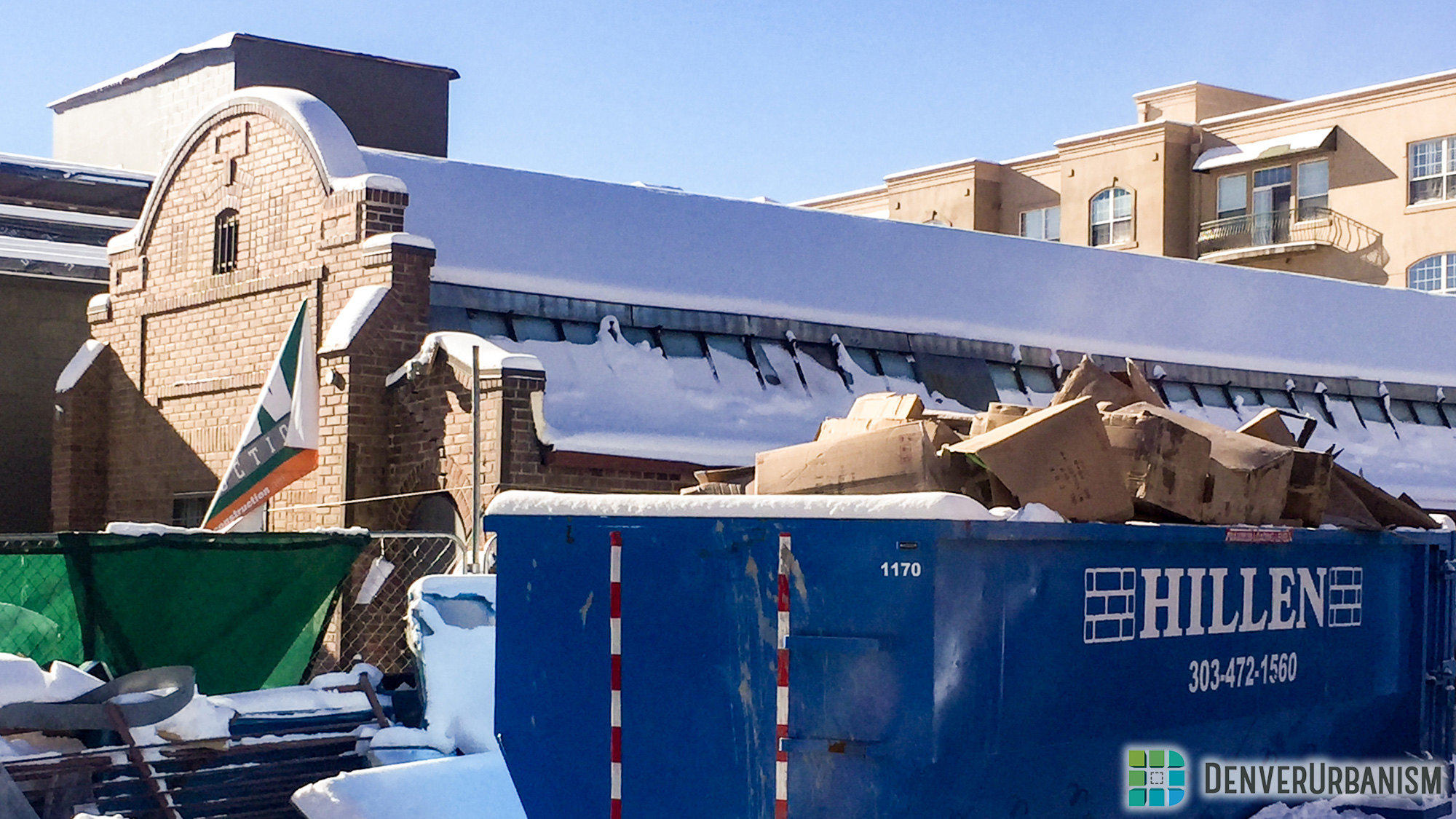 With its completion, the addition of the Olson Kundig-designed Kirkland Museum will join the ranks of other Denver buildings now famous for the people and designs behind their architectural histories, including the 1971 development of the Denver Art Museum’s North Building by renowned Italian architect Geo Ponti; the 2006 Frederic C. Hamilton Building expansion of the Denver Art Museum by Polish-American architect Daniel Libeskind; the 1996 renovation and expansion of the Denver Central Library’s Burnham Hoyt-designed building by prolific American architect Michael Graves; and the nearby History Colorado Center, which opened its David Tryba-designed new and expanded building by in 2012. Almost serving as a backdrop, this impressive architectural collection will also be accompanied by the Beaux Arts and Greek revival-style architecture located in nearby Civic Center Park.

Looking back more than 50 years at the neighborhood, one might not have suspected that Golden Triangle would be where it is today in terms of development or use. What is historically one of Denver’s oldest neighborhoods, the neighborhood eventually became an area for industrial businesses and uses after the end of World War II. Similar to the ongoing evolution of the formerly-industrial River North region today, while the Golden Triangle was once a low-income area, it now boasts the most expensive retail market in Denver, and average home sale prices of nearly $700,000.

While this progression over the past 20 years is striking, and sometimes uncomfortably juxtaposed with Civic Center Park’s high concentration of homeless populations (providing for a sober reminder that Denver’s rapid development is not picking up everyone along the way), it should be noted that Golden Triangle’s growing architectural prominence has largely been spurred by the need for expansions of artistic, cultural and civic spaces already loved and being utilized in Denver.

Overall, this is a signifier not only of a growing population interested in exploring what these institutions have to offer, but also a strengthening tourism industry that is now seeing Denver as a civic and cultural destination. By moving the Kirkland Museum to Golden Triangle, the hope is that it suggests Denver’s desire to continue providing increased artistic and cultural experiences for all populations, where the continued densification of the city insinuates that the demand will be there to meet it.