What is a woonerf? It’s a Dutch term (pronounced VONE-erf) for a street that is designed primarily for pedestrians and bicyclists while still allowing motor vehicle access at slow speeds. Popularized in Europe, a woonerf functions as a shared, social space somewhat like a linear plaza while still providing local access to vehicles. A woonerf design typically uses more subtle infrastructure elements such as bollards, landscaping, and different paving materials to distinguish the areas where pedestrians, bikes, and vehicles travel rather than the traditional curb, sidewalk, and bike lane.

35th Street between Arkins Court and Wazee Street is a perfect candidate to be redesigned as a woonerf. First, it isn’t a through street for motor vehicle traffic; it’s only four blocks long and is blocked by the river on one end and railroad tracks on the other. Second and more critically, 35th Street is identified as a prime east-west pedestrian/bike corridor through RiNo as it will connect the RiNo Pedestrian Bridge over the river with the 35th Street Pedestrian Bridge over the railroad tracks and run adjacent to the planned River North Park.

Here is a diagram from a recent presentation provided by the city’s North Denver Cornerstone Collaborative showing a conceptual cross-section for 35th Street: 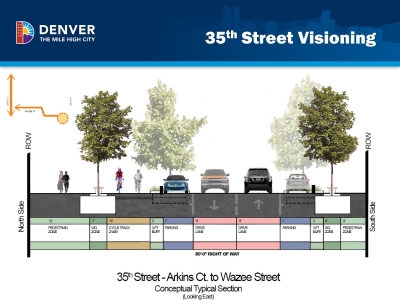 An example of something similar to a woonerf in Denver may be the newly redesigned Fillmore Plaza in Cherry Creek North. It has several features found in a woonerf, such as the street and sidewalk being at the same grade and a strong pedestrian-focused design. Here’s a Google Earth street view image of Fillmore Plaza:

Here’s a Google Street View image of the Bell Street woonerf in Seattle:

As River North transitions from an automobile-oriented industrial zone to a multi-mode mixed-use district, transforming 35th into a great pedestrian street will be key in that evolution. The combination of the RiNo Pedestrian Bridge + River North Park + 35th Street Woonerf + 35th Street Pedestrian Bridge has the potential to have the same transformative impact on connecting River North to the rest of Denver as the Highland Bridge + 16th Street Plaza + Platte River Bridge + Commons Park + Riverfront Park Plaza + Millennium Bridge combination did in connecting Lower Highland with Downtown Denver.

The images below show 35th Street in its current rough-around-the-edges state: 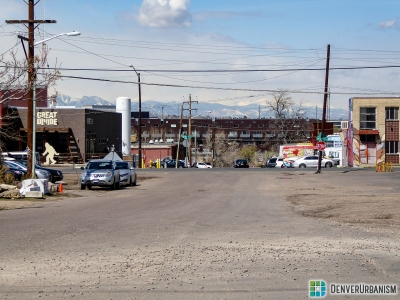 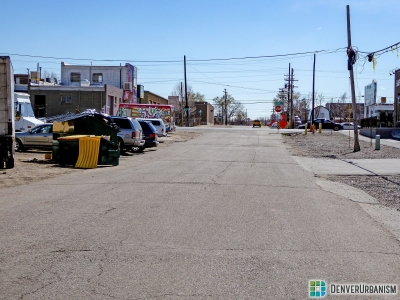 Next up in this series: Blake Street Two-Way Conversion + Bike Lanes. Stay tuned!