Denver’s River North district is booming with both private-sector development and public investment in transportation facilities and public spaces. So far in our series looking at RiNo’s new infrastructure, we’ve had a FasTracks update on RTD’s 38th & Blake Station, followed by Part 1: 35th Street Pedestrian Bridge and Part 2: 38th Street Pedestrian Bridge. In Part 3, let’s take a look at the reconstruction of Brighton Boulevard. 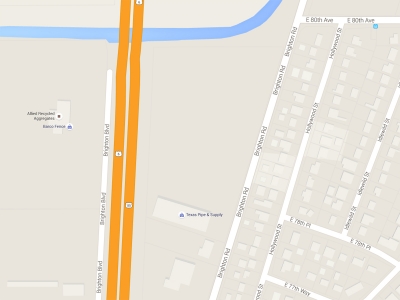 Before we get to the reconstruction of Brighton Boulevard, let’s look at the street’s history!

The stretch of Brighton Boulevard in today’s RiNo was platted as part of different subdivisions from the mid-1870s through the early 1890s. The first segment of Brighton Boulevard, located between 38th and 44th Streets, was laid out as part of St. Vincent’s Addition of 1874 and was appropriately named St. Vincent Street. Developed by Catholic Bishop Joseph Machebeuf, the St. Vincent’s Addition reserved eight blocks of land between 39th and 41st Streets for a hospital to be known as St. Vincent’s Home. The hospital building’s foundation was completed but the project never made it any further and was abandoned. 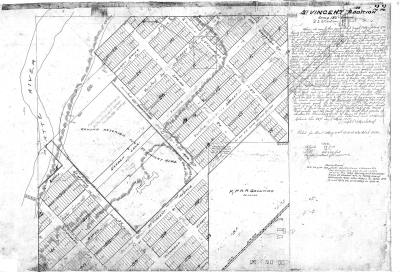 In 1881, the next section of Brighton Boulevard, roughly between 34th and 38th Streets, was platted as part of the Ironton subdivision of January 1881 and the Ironton First Addition of June 1881. The “Ironton” name was appropriate, for throughout the two Ironton subdivisions (and St. Vincent’s Addition too), several smelters and foundries were developed. Business such as Rocky Mountain Ore Production Works, Denver Rolling Mill, Colorado Iron Works (where The Source is today), Denver Ore Sampling Works, and the Grant Smelter Works dominated the area during the 1880s. By 1882, St. Vincent Street had been renamed Wewatta Street. 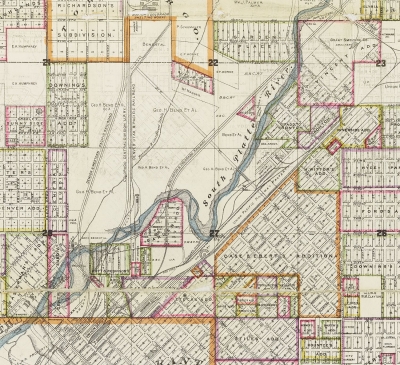 In the 1880s, the area was still largely undeveloped except for the industrial uses noted above, which were mostly found southwest of 34th and northeast of 41st. However, single-family homes on 25-foot lots were starting to sprout up in the area by the late 1880s. Robinson’s Atlas of 1887 shows several small houses scattered mostly along Wewatta and Delgany. Wood houses are color-coded as yellow and brick houses are pink. Just for fun, I’ve cropped a current Google Earth aerial image to the same extent as the Robinson map:

Many of the houses along Delgany Street between 36th and 38th Streets are still around and used as residences. Several others in the area have been converted to commercial uses.

Small homes from the late 1800s remain along the 3600 block of Delgany. Source: Google Street View.

During the 1800s and early 1900s, the area was fairly isolated by the Union Pacific railroad tracks, with the primary connection into the neighborhood via 38th Street. Connections to the rest of the city improved, however, in the early 1920s with the completion of the controversial Broadway Extension project that pushed Broadway north from its then-terminus at Welton Street and across the diagonal downtown street grid to Blake Street, where a new viaduct took Broadway over the railroad tracks and curved northeast to connect to Wewatta Street. This image of a document from the late 1910s promoting the Broadway Extension shows the proposed path of Broadway.

With the completion of the Broadway Extension project, Wewatta Street was renamed Brighton Boulevard by the Denver City Council in 1924.

The mix of industrial and residential uses in the area continued into the 1930s. Here is an aerial from 1933 showing the Brighton Boulevard corridor. Note the mix of single-family homes and gritty industrial/railroad uses. This is a big image—click, zoom, and scroll!

1933 aerial photograph showing a mix of industrial and residential uses along the Brighton Boulevard corridor. Source: City and County of Denver.

Into the post-WWII era, the residential uses were mostly overtaken by light industrial, commercial, and automobile-related uses. This 1992 aerial photo, cropped to the same extent as the 1933 aerial above, shows the loss of much of the 19th century housing in the area.

1992 aerial photo of the Brighton Boulevard corridor showing increased industrial and commercial uses and fewer residential uses compared to earlier in the century. Source: City and County of Denver.

Given the gritty, industrial nature of the Brighton Boulevard corridor and its relative isolation from the rest of the city, the area received virtually no infrastructure improvements from the city over many decades. Denver was content to allow Brighton Boulevard and its adjacent blocks to suffer with poor lighting and storm water drainage and a complete absence of sidewalks, curb, and gutter. This is the streetscape that still exists along Brighton Boulevard today:

That condition is about to change dramatically, and soon! With hundreds of millions of dollars of new development reshaping the River North area, the city is moving forward in 2016 with a complete reconstruction of the corridor’s infrastructure, paid for by $25 million in city funds (part of the North Denver Cornerstone Collaborative) and several million dollars from local property owners who voted to raise their taxes through a Business Improvement District and a General Improvement District to fund important upgrades to the project.

The best way to get a sense for what the new Brighton Boulevard will be like is to watch the following video, courtesy of the North Denver Cornerstone Collaborative and RNL Design, who produced the video.

Construction should begin later this year and be complete in 2017.

In Part 4 of our RiNo Infrastructure series, we will take a look at the plans for the new River North Park.