So now that we’ve covered the first post in the series, it’s time for the next episode. Though the last article was featuring a project by Zeppelin Development, Inc. , we are going to take a look at yet another of their latest ventures. Further building capacity within the neighborhood and diversifying amenities, Zeppelin Development has recently broken ground on “DRIVE”. 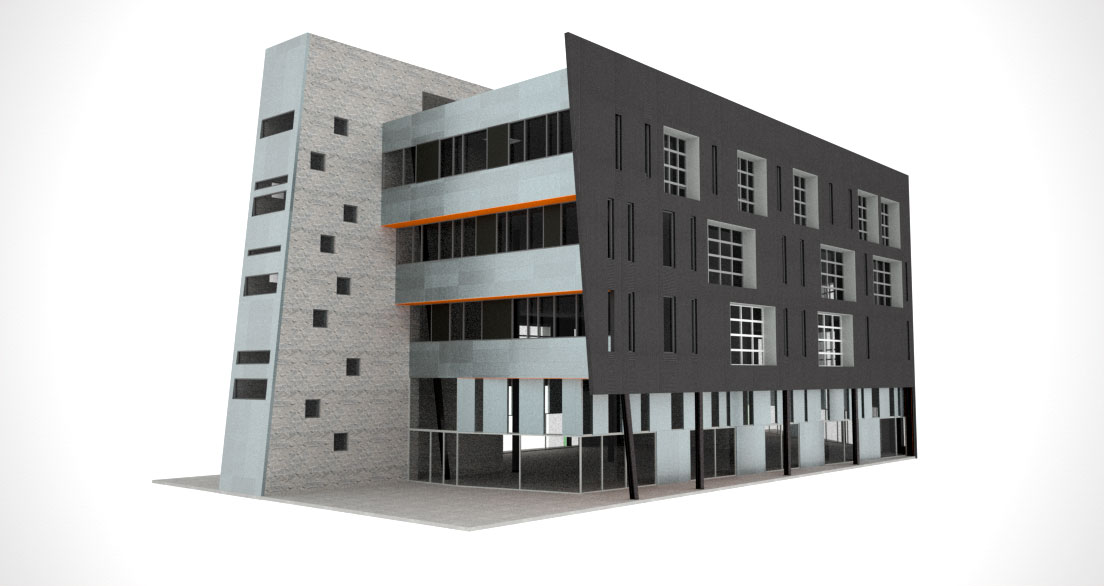 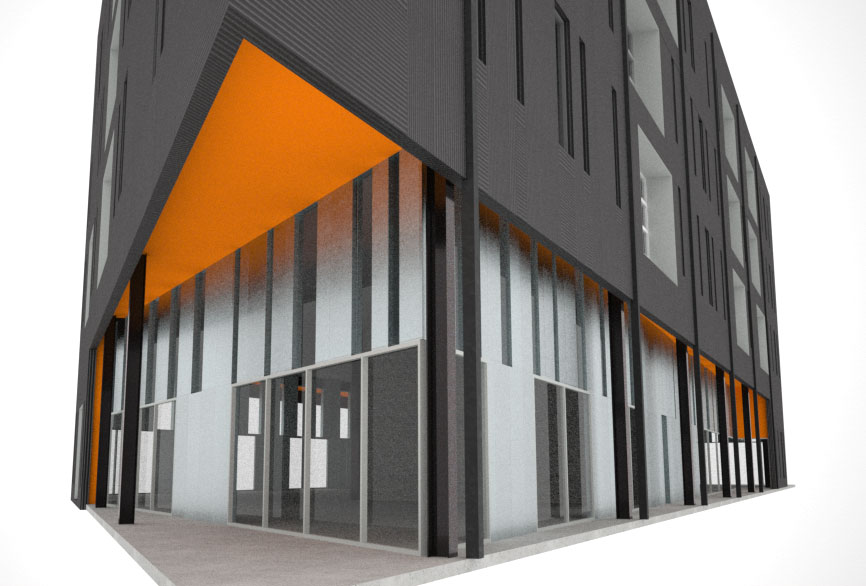 This concept, like others from their portfolio, will take a refreshing detour from the typical. DRIVE will be a 4-story structure that provides 20+ sleek, urban office spaces on the same site as Zeppelin’s mixed-use development, “TAXI“. As the first LEED-certified structure on the site, DRIVE will make a move to integrate the urban office to the outside environment. Through the incorporation of 40+ large garage doors lining the exterior, offices will open to the outdoors. Tenants of this project will have graduated to a new kind of work experience. As Kyle Zeppelin explained, “In many ways, it is the opposite of the typical office format that often includes — sterile corridors, overdone atrium lobbies without a purpose, and hierarchical spaces that often lacking in natural light and landscape.” This concept will drench inhabitants in natural light, give them an open-air office and offer them a view of the mountains. No longer will office workers need to massage their eyes back to life after they’ve frozen in the daily 8-hour winter of florescent light and no windows. This simple, but effective idea will increase sustainability while improving quality of life in the work environment. 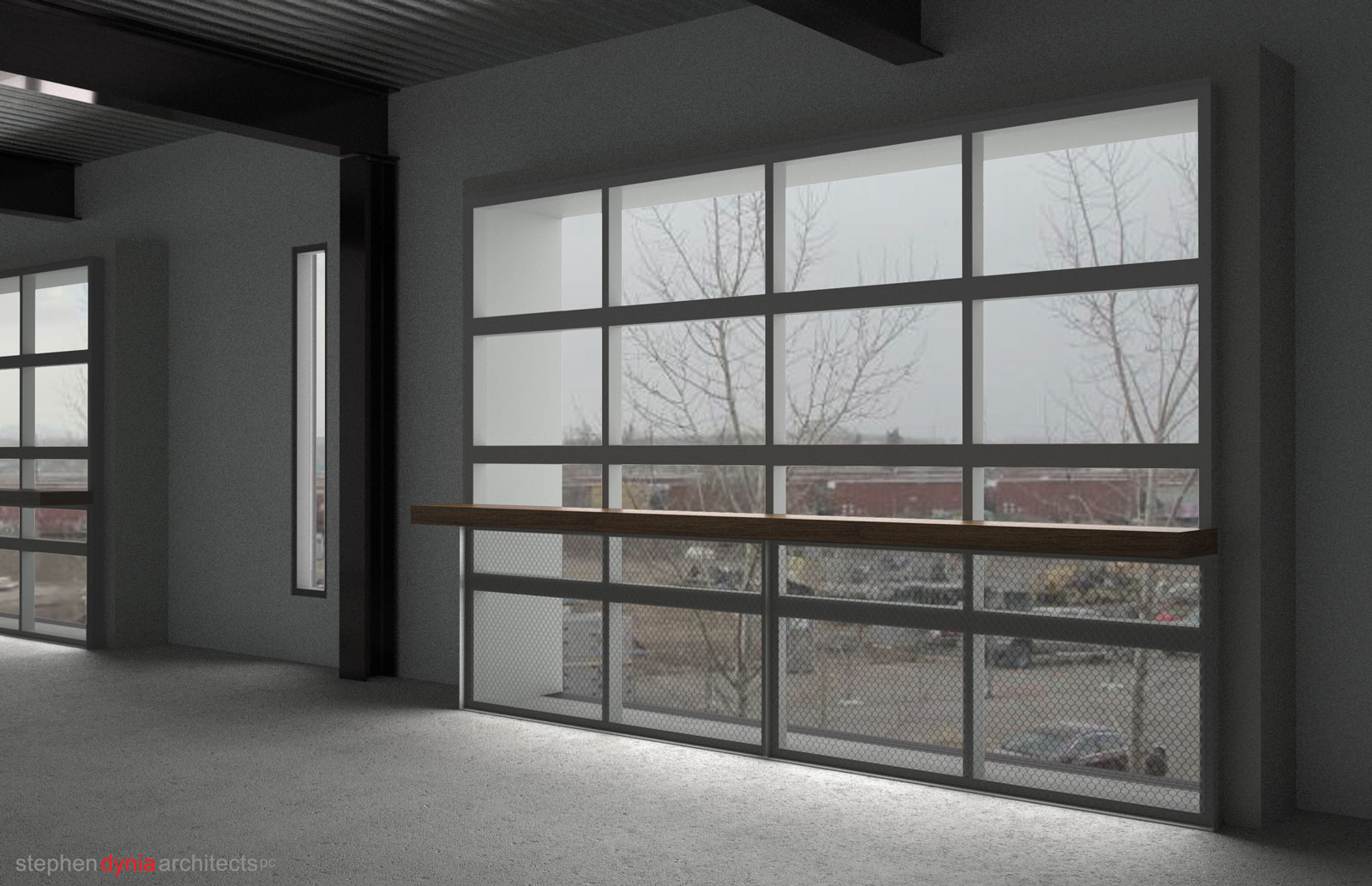 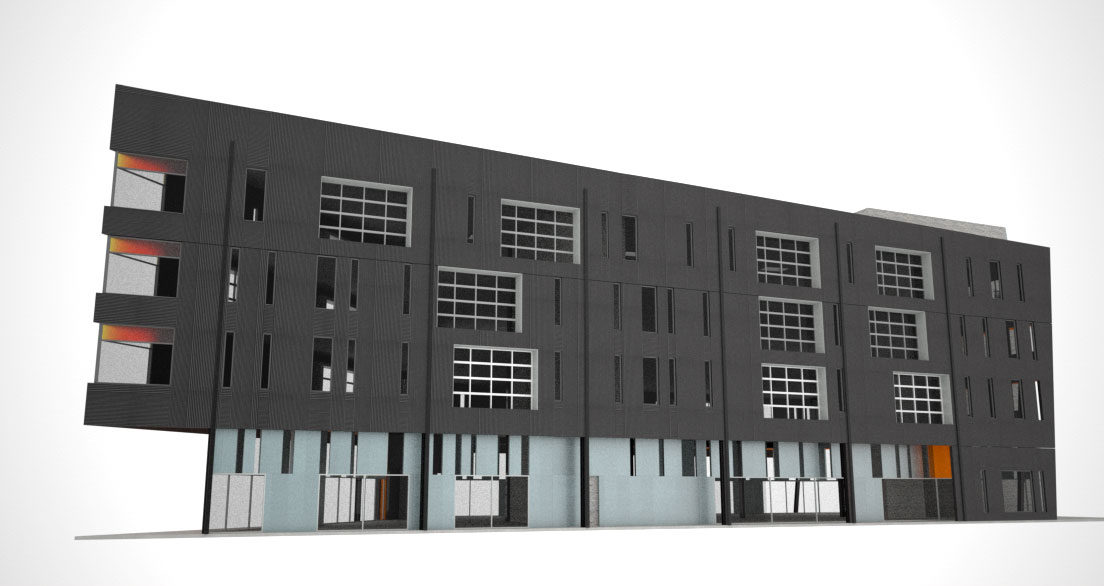 As DRIVE is added to the greater collection of buildings on the site, all of the facilities will benefit from the addition of new amenities. Included in the new building will be a 2,000+ square foot multi-purpose Café and event space. The function of this space will serve as a conference space significant enough to be used by the community, and for larger events which are not currently able to be accommodated. Also, a gourmet sandwich counter/salumi bar and an artisan coffee bar will increase activity in the space while providing an environment for tenants to detach from their formal work spaces.

The high-design rendered in the Drive development is the work of “FREIGHT” architect, Stephen Dynia. In addition, a collection of other design firms based in the TAXI development also contributed to the concept. BRS (Architect of record), Deerns (MEP), KL&A (Structural) and Groundworks (Landscape) all had a hand in this collaborative effort. Aside from the bold aesthetic crafted into the actual building, attention to detail was also afforded to landscaping. The grounds surrounding the structure will feature native plantings such as cottonwood trees and native grasses. The aim is to promote pedestrian and bicycle traffic over the use of cars. 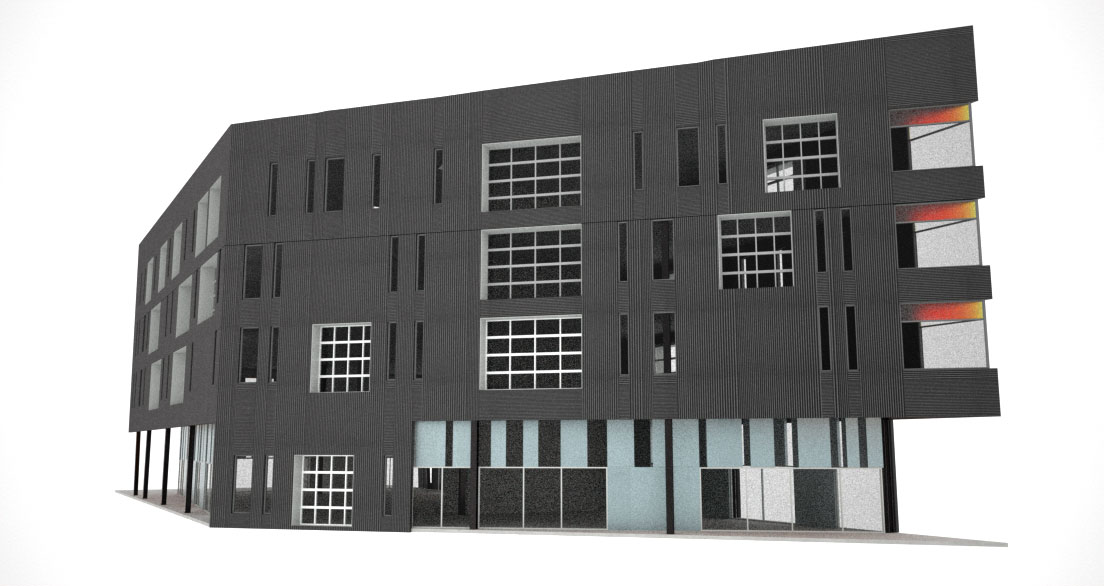 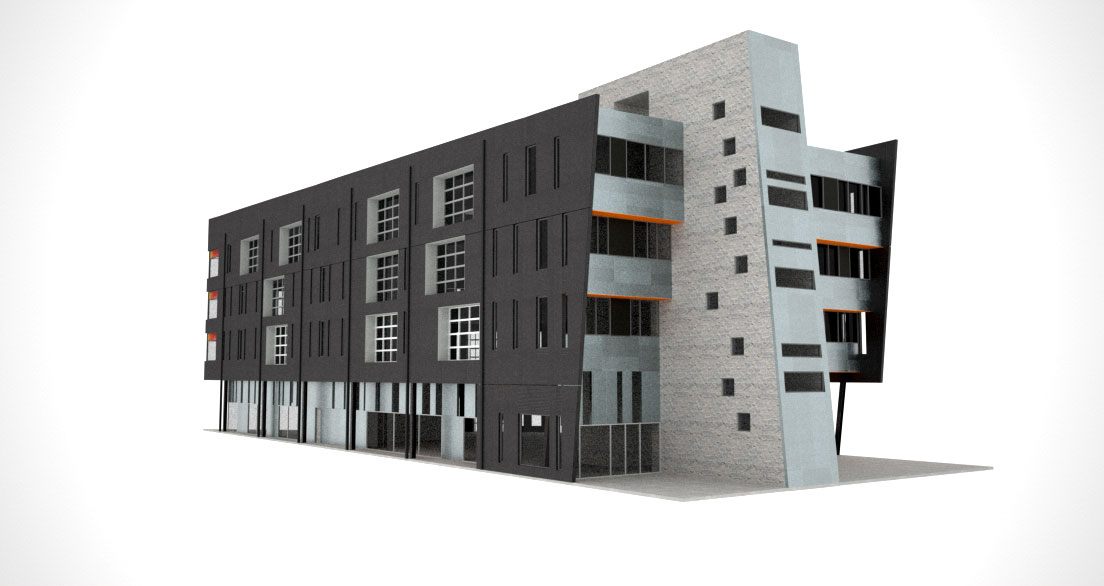 Within the past month, the project broke ground and the stair core has now made its way a few stories into the air. It is expected that DRIVE will be completed by October of 2012. Several tenants have already signed on and the project is filling up quickly. Zeppelin Development predicts that all leasable space will be spoken for by the completion date. 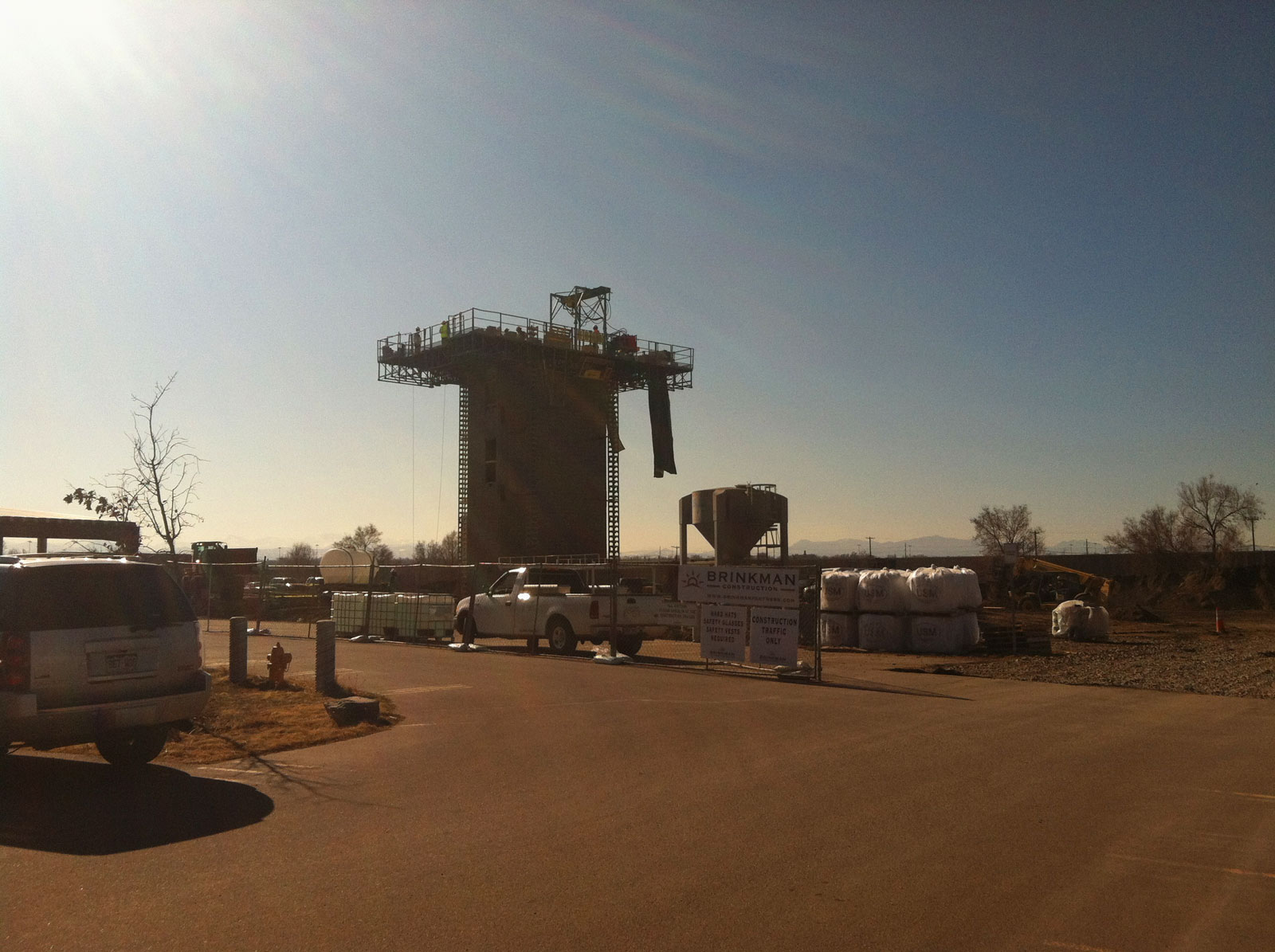 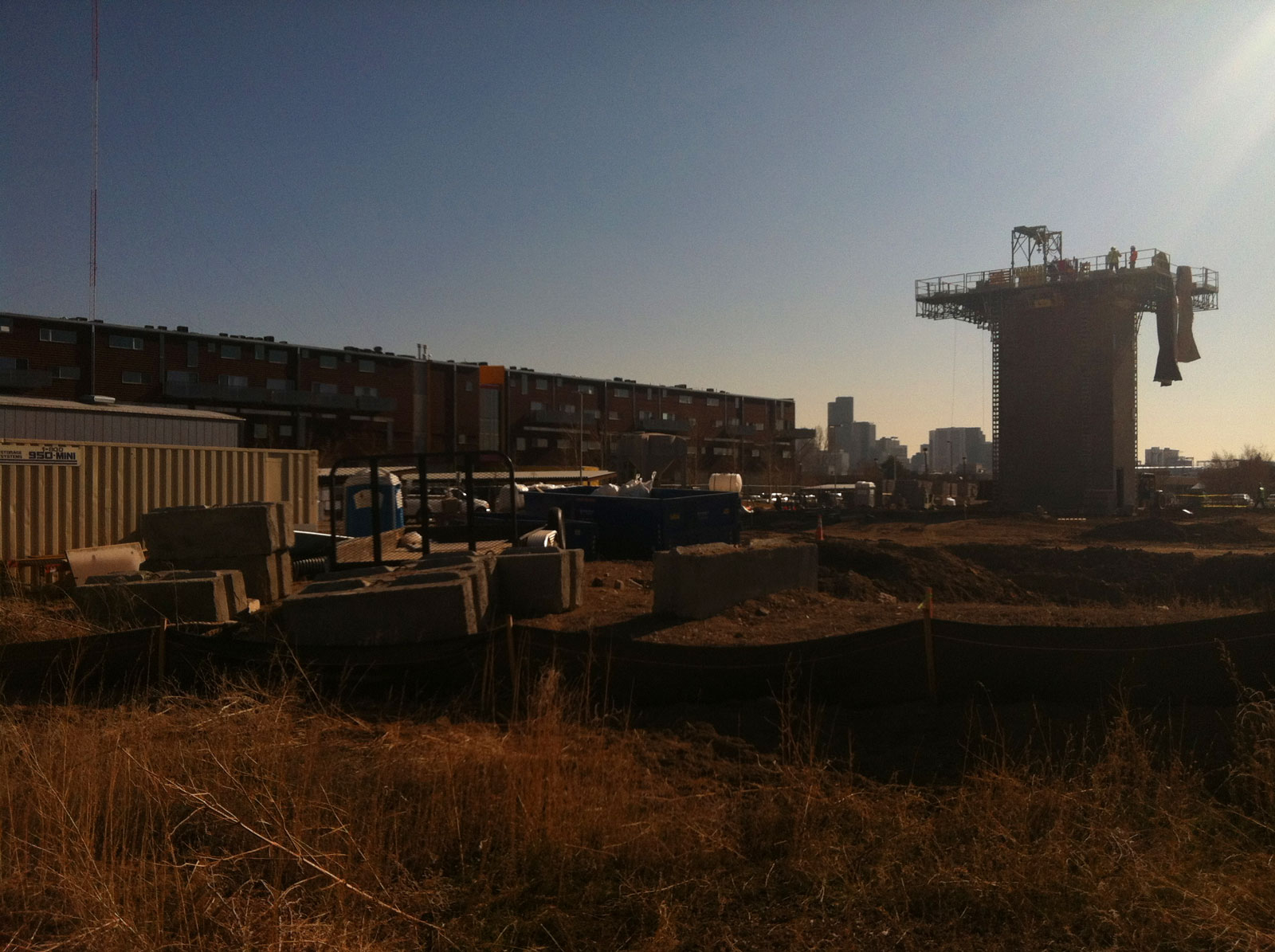 This project will be especially exciting to watch given contextual development prospects. Not only will DRIVE strengthen the foundation for other developments, like “The Source”, but it also helps to leverage investment in other efforts. One such effort is the proposal of a new pedestrian bridge and riverfront park adjacent to the site. Though still on the drawing board, these projects would begin to populate the area with support infrastructure for alternative mobility and recreation functions. Strengthening the relationship between TAXI, River North and ultimately the rest of the city, would likely propel River North on its current path toward gaining even more big-ticket projects.