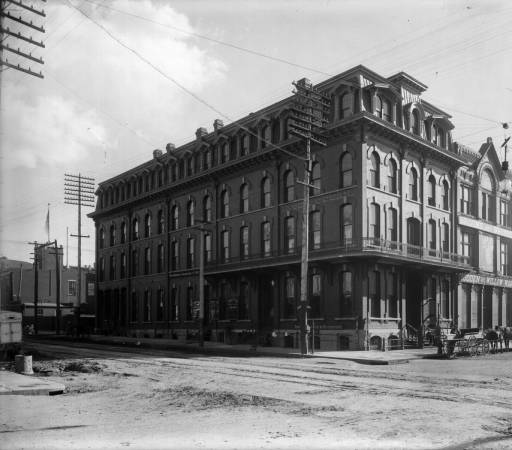 The Inter-Ocean Hotel, 1436 16th Street, graced the corner of 16th and Blake Streets for one hundred years. Opening to the public on October 29, 1873, the hotel was the creation of Denver pioneer Barney Ford—Colorado’s most prominent black businessman. William N. Byers, editor of the Rocky Mountain News, proclaimed it “the finest in the territory and the best appointed hotel west of Saint Louis.” He described the second floor as having “an abundance of bronze chandeliers, rich velvet drapes trimmed with satin and ‘yellow and black braid’, heavy bullion tassels and ‘costly lace curtains’”. In addition, the front desk “was semi-circular, behind which was a beautiful black walnut key rack and…close at hand [was] a patent anunciator with wires to every room [and] speaking tubes on every floor.”

The hotel sat diagonally from the American House, another major Denver hotel built by John Wesley Smith in 1868. Smith eventually purchased the Inter-Ocean in 1876. After the more opulent Windsor Hotel opened at 18th and Larimer in 1879, both the American House and the Inter-Ocean lost some stature, but joined the ranks of over 50 independently owned hotels that would eventually grace downtown Denver over the next century. While the Inter-Ocean never enjoyed any prominence among these hotels and failed to prosper as a top tier accommodation, it is remembered as one of Denver’s best examples of Second Empire style architecture. Its mansard roof and beautiful furnishings and decoration made it a site to behold as it rose upon the prairie in a city that was barely 15 years old. While the American House was razed in 1933, the Inter-Ocean managed to hold on until 1973, when its status as a low rent hotel for transients and those down on their luck led to its demolition for a parking lot. While preservationists lament the loss of one of Denver’s most well-known early buildings, the Inter-Ocean lives on in photographs and historic lore.