We saw the new Federal Blvd. bridge (albeit briefly and in a snowstorm) in our last update. Here’s some clearer shots of the bottom of the new structure which crosses over the light rail tracks, Lakewood Gulch, and the bike path. As mentioned in the previous update, the bridge is equipped with areas for the buses to pull off without disrupting traffic and drop passengers off. Major utilities are also enclosed on the bottom of the structure, as seen in the pictures below. Also, you may notice some of the first public artwork installed along the corridor underneath the Federal bridge across the gulch. More information on that will come in a later update. 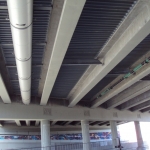 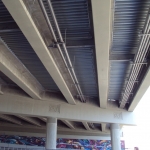 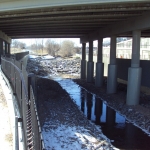 Here’s a quick look at some of the design detail on the bridge supports, as well as a quick glimpse of the walkway to the light rail station from the west side of the bridge, as mentioned in the previous update. This walkway makes Federal Blvd. safer for pedestrians and motorists alike as it allows people to cross Federal underneath the bridge to access the light rail station, rather than crossing in traffic. 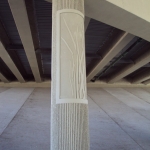 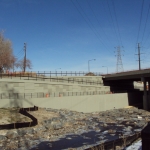 As you travel underneath Federal heading east on the bike path, you are treated with a great view of downtown Denver, as both Charles (Pug) and Joey (Basset Hound) will show you. 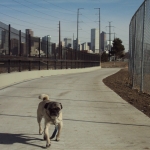 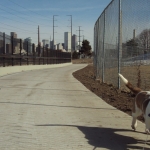 As part of the West Corridor, three new pedestrian bridges will be built across the Lakewood Gulch at Hazel Court, Tennyson, and Wolff Streets. We’ll see the Hazel and Tennyson bridges in today’s update and we’ll take a look at Wolff in the next. Located about five blocks west of Federal, the Hazel pedestrian bridge helps link both sides of Lakewood Gulch and gives residents a safe crossing above the light rail tracks. The only options – short of walking and crossing the creek on rocks – was to walk either east to Federal or west to Knox. 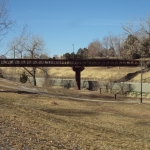 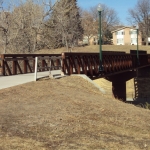 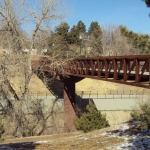 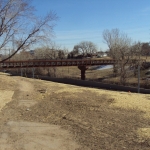 The Knox Station is nearing completion, following a lot of stormwater mitigation work. Knox Street was closed for several months as crews worked to replace the box culvert underneath Knox just north of 12th Avenue with a three-box culvert to more effectively move water during flood events. The Knox Station is a “neighborhood” station, similar to the Louisiana-Pearl Station on the Southeast Corridor, and will not have any parking provided. Knox has been reopened to traffic, complete with pull off lanes for buses similar to those seen on the new Federal bridge. 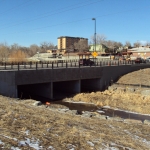 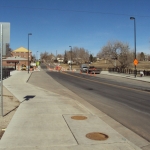 As mentioned before, a lot of stormwater mitigation work was done in this segment of the corridor, as well as a lot of tree plantings to replace those that were removed to allow for light rail construction. Large retaining walls also make sure that even during floods, the light rail trains are not in danger. 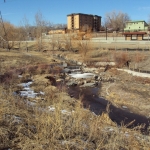 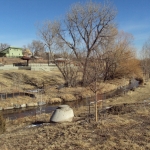 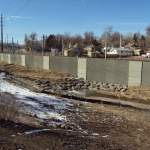 The Knox Station follows the same design scheme as will be evident along the rest of the corridor (we didn’t see the canopies and station design at the Dectaur-Federal Station because those have not been installed yet). The station is nearing completion – tracks have been laid, windscreens have been installed (and covered), and concrete is being poured. The grade crossing guards throughout the alignment will be complete prior to trains being tested along the corridor. 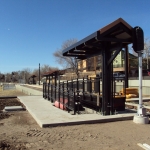 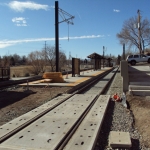 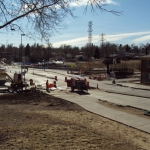 The Perry Station looks much like the Knox Station, and also is a “neighborhood” station with no parking provided. The station is a little further along in terms of construction, complete with light fixtures and most of the concrete poured. 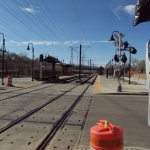 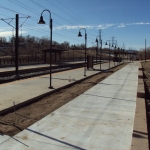 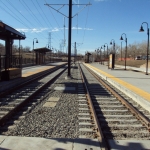 The Tennyson Street bridge, like the Hazel Court bridge,  helps link the West Colfax and Villa Park neighborhoods. The bridge isn’t open right now, but it will be open prior to the light rail opening expected in May 2013. The Tennyson bridge is longer than the Hazel bridge and has a nice double arch design built into the side. 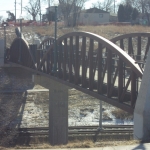 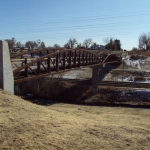 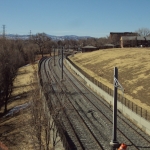 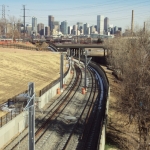 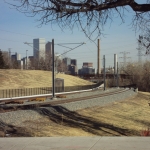 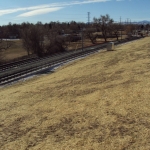 In the next update, we’ll focus on the Sheridan Station. Some major infrastructure has been completed there and redevelopment opportunities are starting to show themselves as the corridor comes closer to opening.