Time for a DenverUrbanism exclusive look inside the historic Denver Union Station’s transformation from a sleepy train station into a luxury hotel. RTD has partnered with Union Station Alliance to transform one of Denver’s most historic structures into a 112-room hotel. Union Station Alliance is a partnership of Urban Neighborhoods (of Dana Crawford fame), Sage Hospitality (Oxford Hotel), and Milender White Construction, among many others. Thanks to RTD and JG Johnson Architects, we have an exclusive look.

If you’ve been down near Union Station anytime within the last few months, it’s hard to miss the scaffolding. There is a TON of work going on at 17th and Wynkoop Streets, but with the notable exception of the massive scaffolding collection, a lot of the work remains hidden inside. 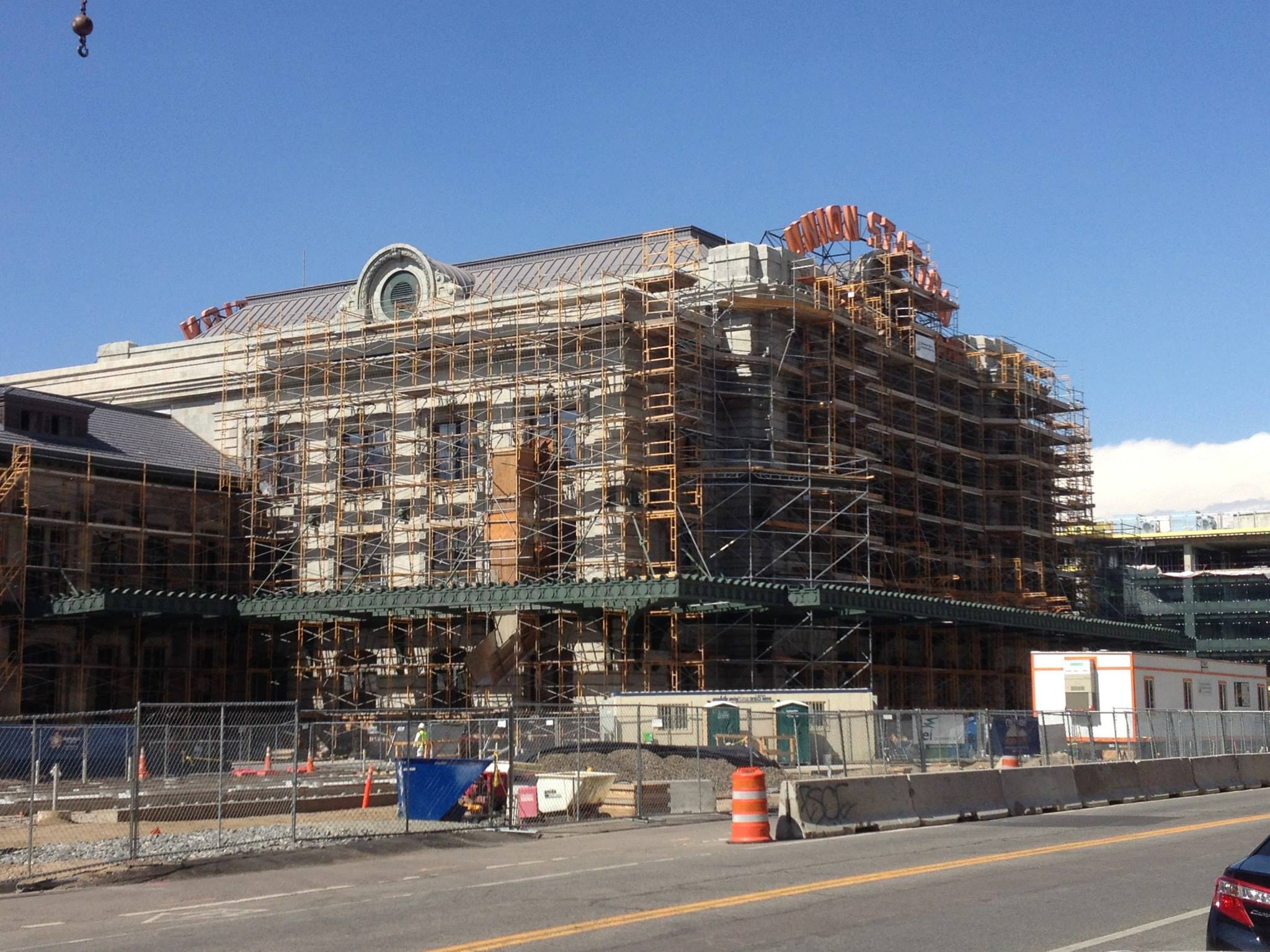 The canopy that surrounds much of the LoDo-front of Union Station will be maintained and restored, as evidenced in the pictures below. There will be patio space surrounding the building – nearly 20 feet worth. The canopy will have glass installed to allow some light through, but protect us from the elements. The nice part about the building being reinvented as a hotel is that crews will always be hand to make sure the canopy is clean and looking it’s best. 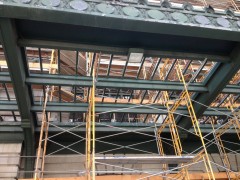 The main train hall room, formerly adorned with long wooden benches and steam heat, is completely filled with scaffolding. Crews are working to restore and refinish the walls to their former glory and will also be installing new light fixtures (replacing the absolutely abhorrent fluorescent lights that were there before) while maintaining the historic elements that graced the hall. The main hall will be a public space serving as a mixing bowl between hotel guests and outside visitors alike. Hotel check in will be on the second floor. 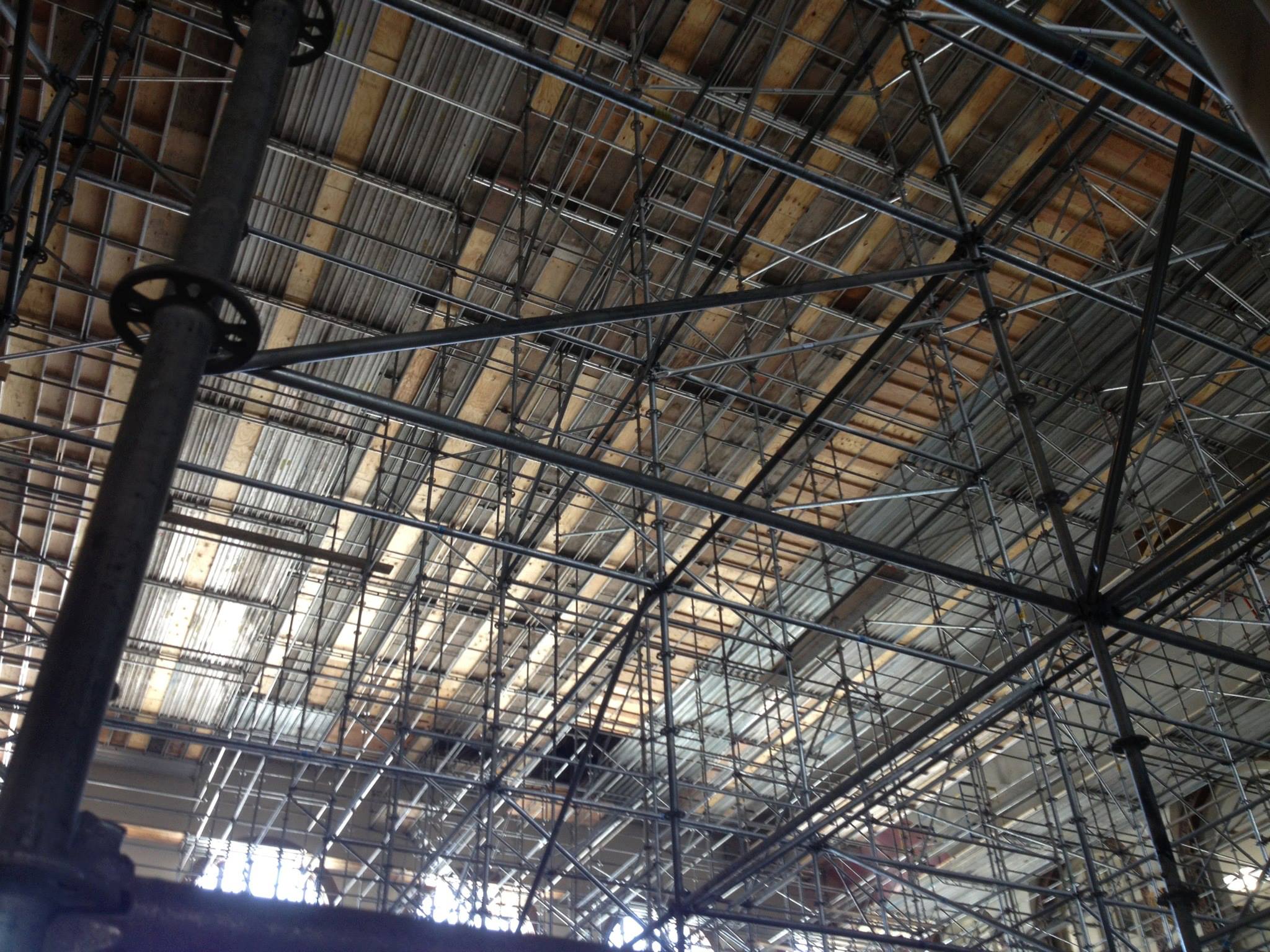 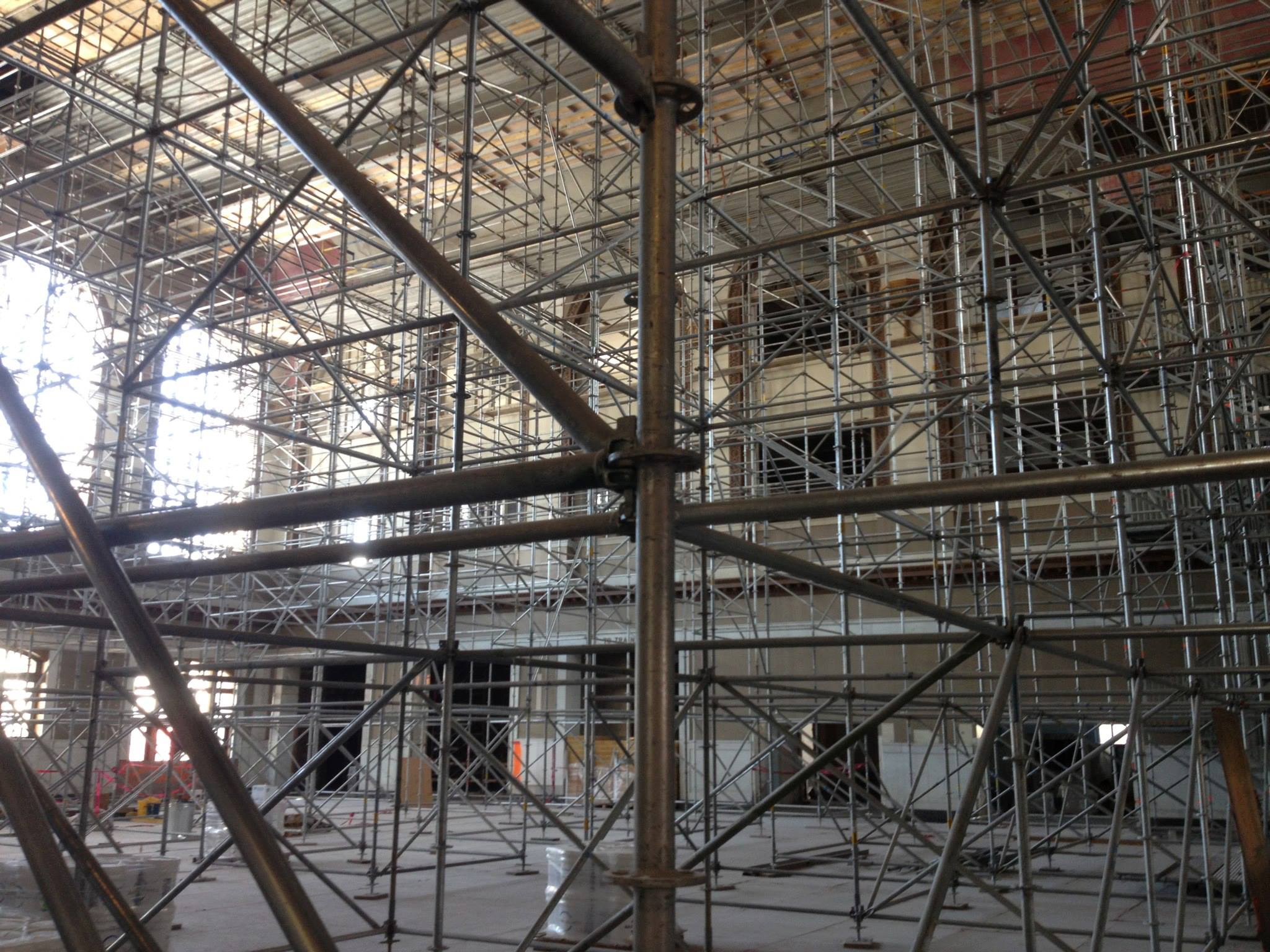 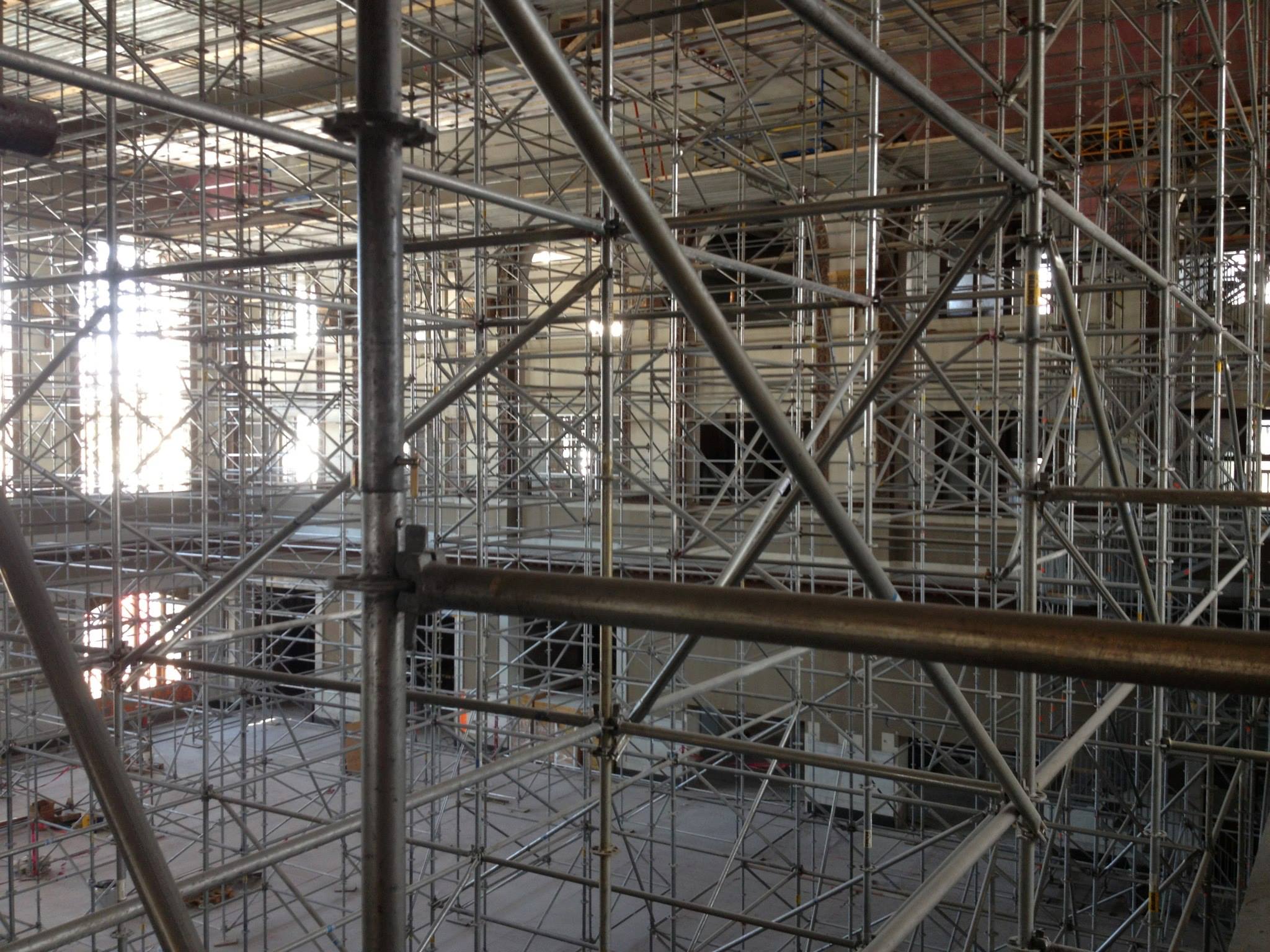 The hall was notoriously echo-filled and acoustically displeasing.  Crews are working to place noise dampeners along the ceiling to help reduce the echos that used to flow throughout the space. As you can see in the pictures below, the pink is a primer applied to the walls prior to the sound dampening panels, which are a grayish-tan color. 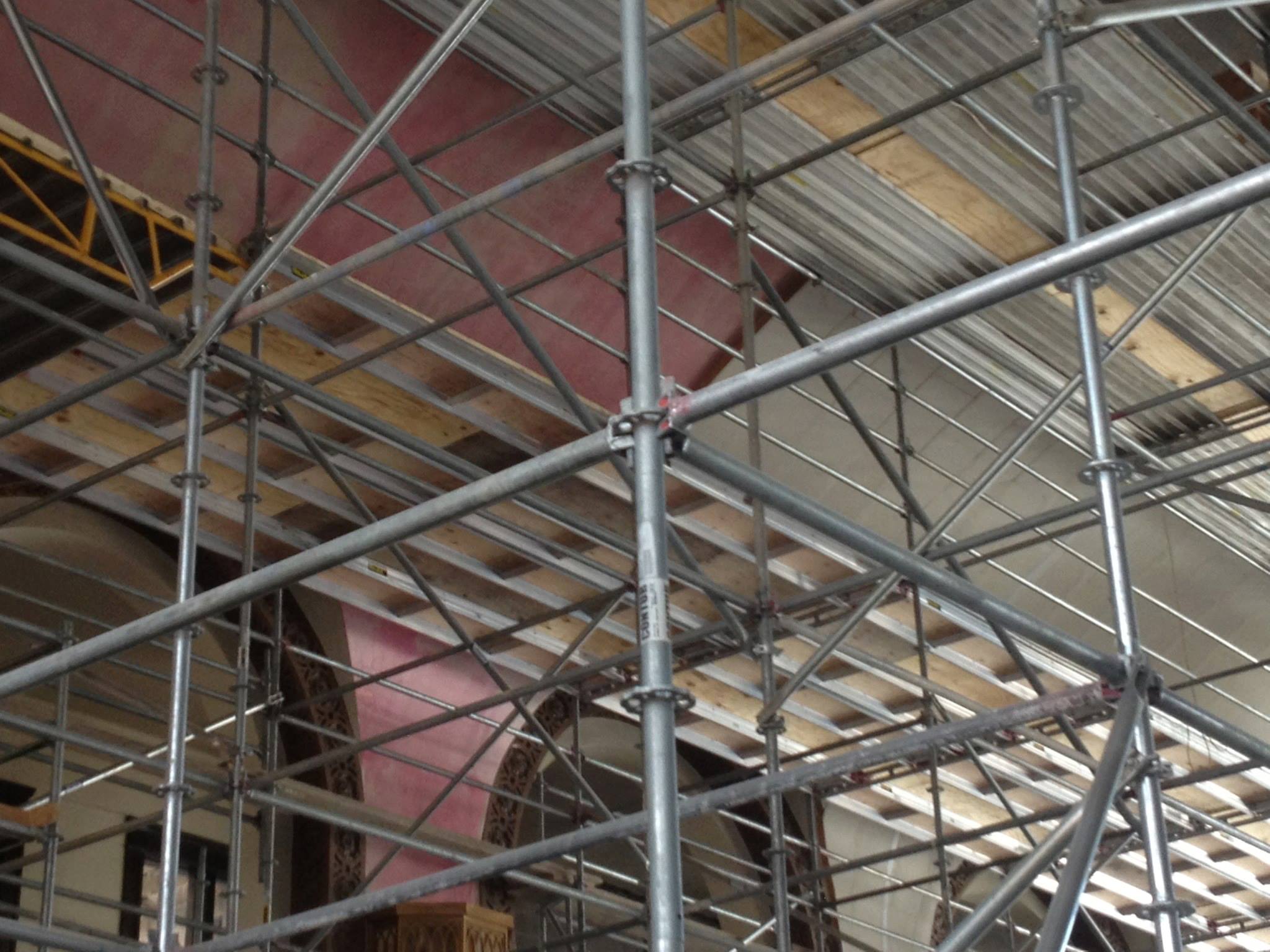 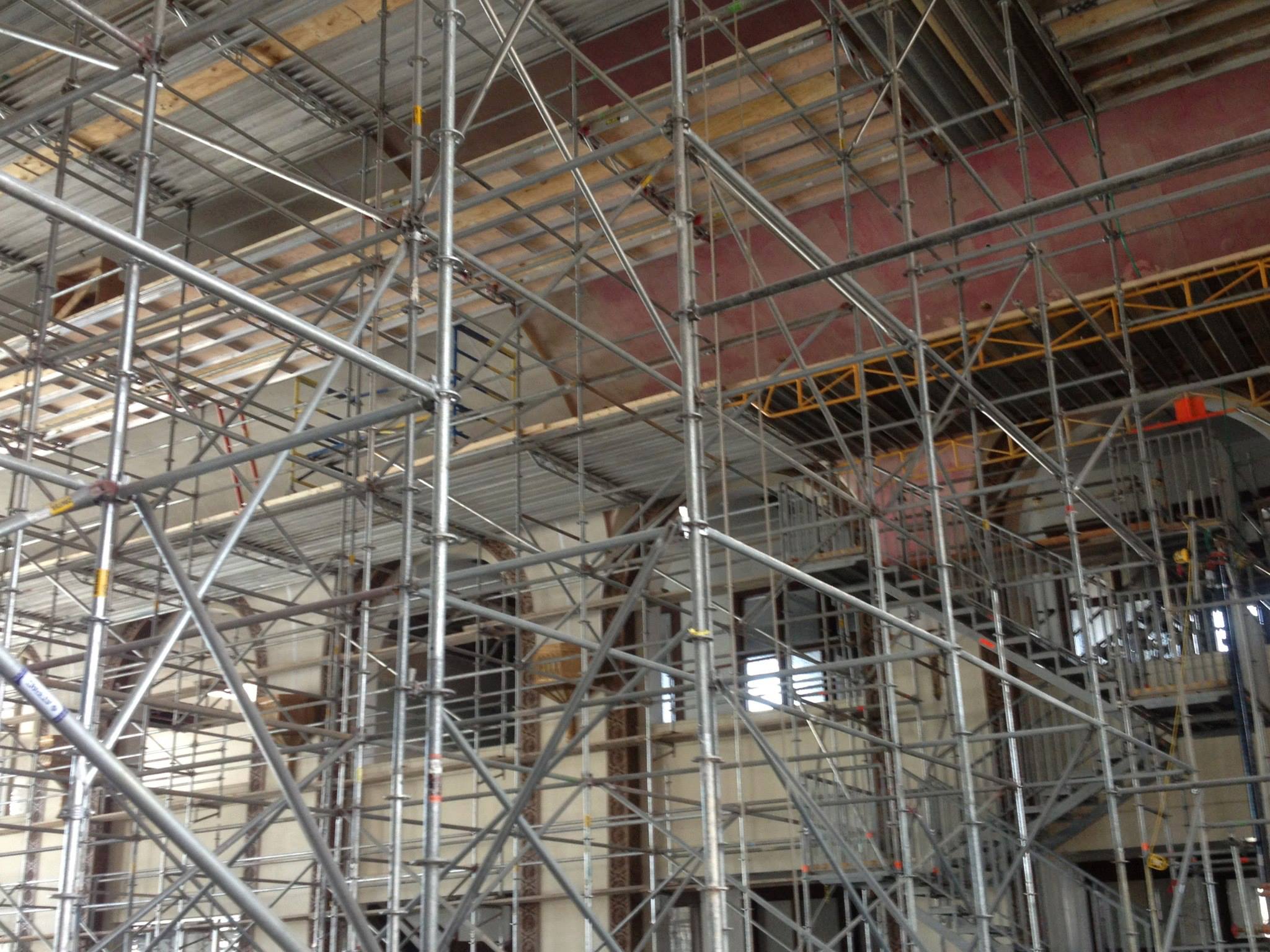 Just off the main train hall in what used to be the ticket office, crews are working to transform the space into what could be known as “The Terminal Room,” serving as a bar for hotel and downtown visitors alike. The Terminal Room was the name of a bar that was at Union Station during the railroad’s hay days – the name is a perfect shout-out to the building’s storied past.  The space is fairly skinny but runs the length of the train hall. It should make for a very cool bar and fit right in down in LoDo. 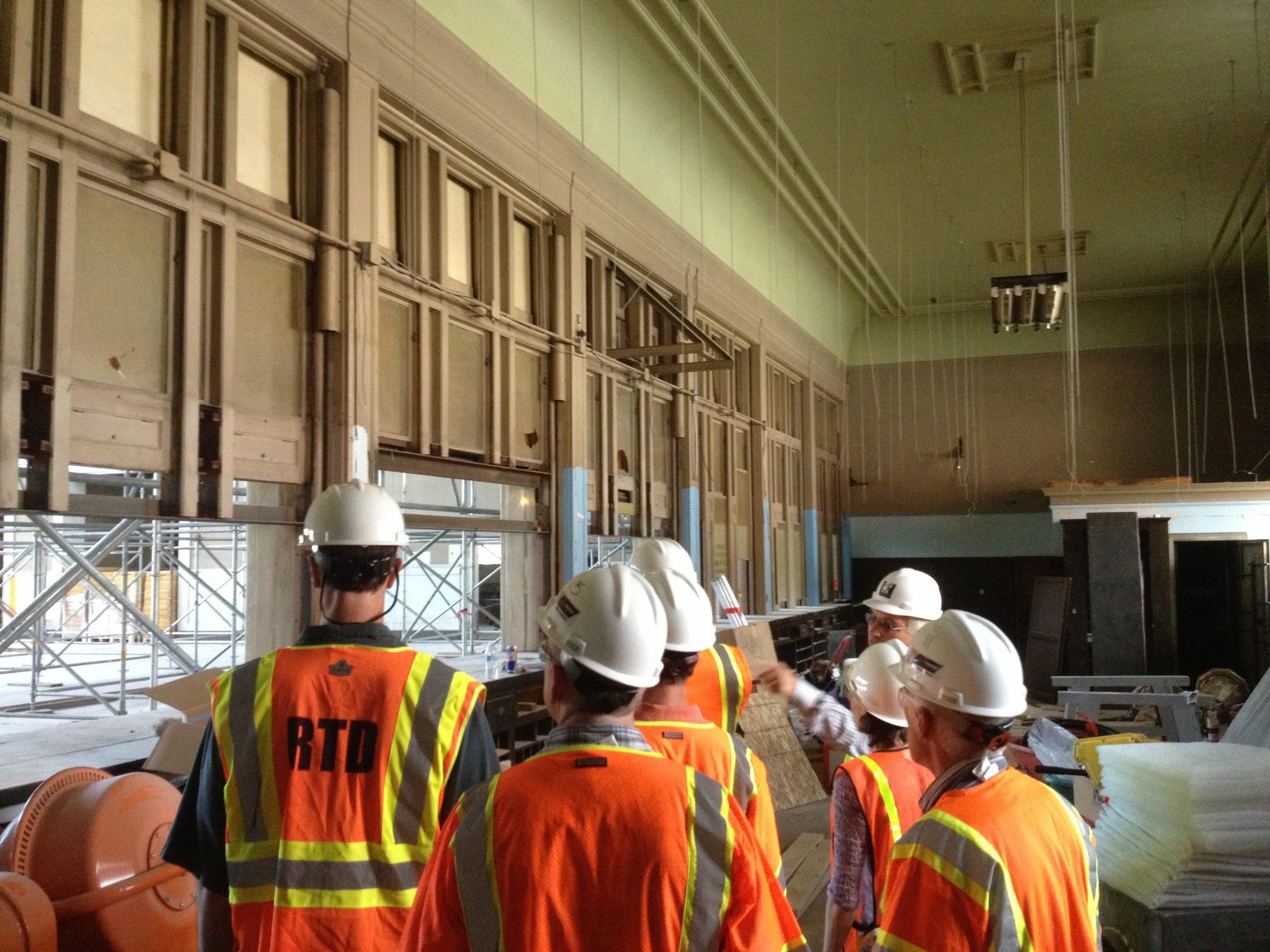 For the historic preservation advocates reading this, take comfort in the fact that it seems that Union Station Alliance and RTD have taken every effort to protect the historic elements within the building. From columns and staircase railings to arch detail and crown moldings, historic elements present before the renovation will still adorn the historic structure after completion. 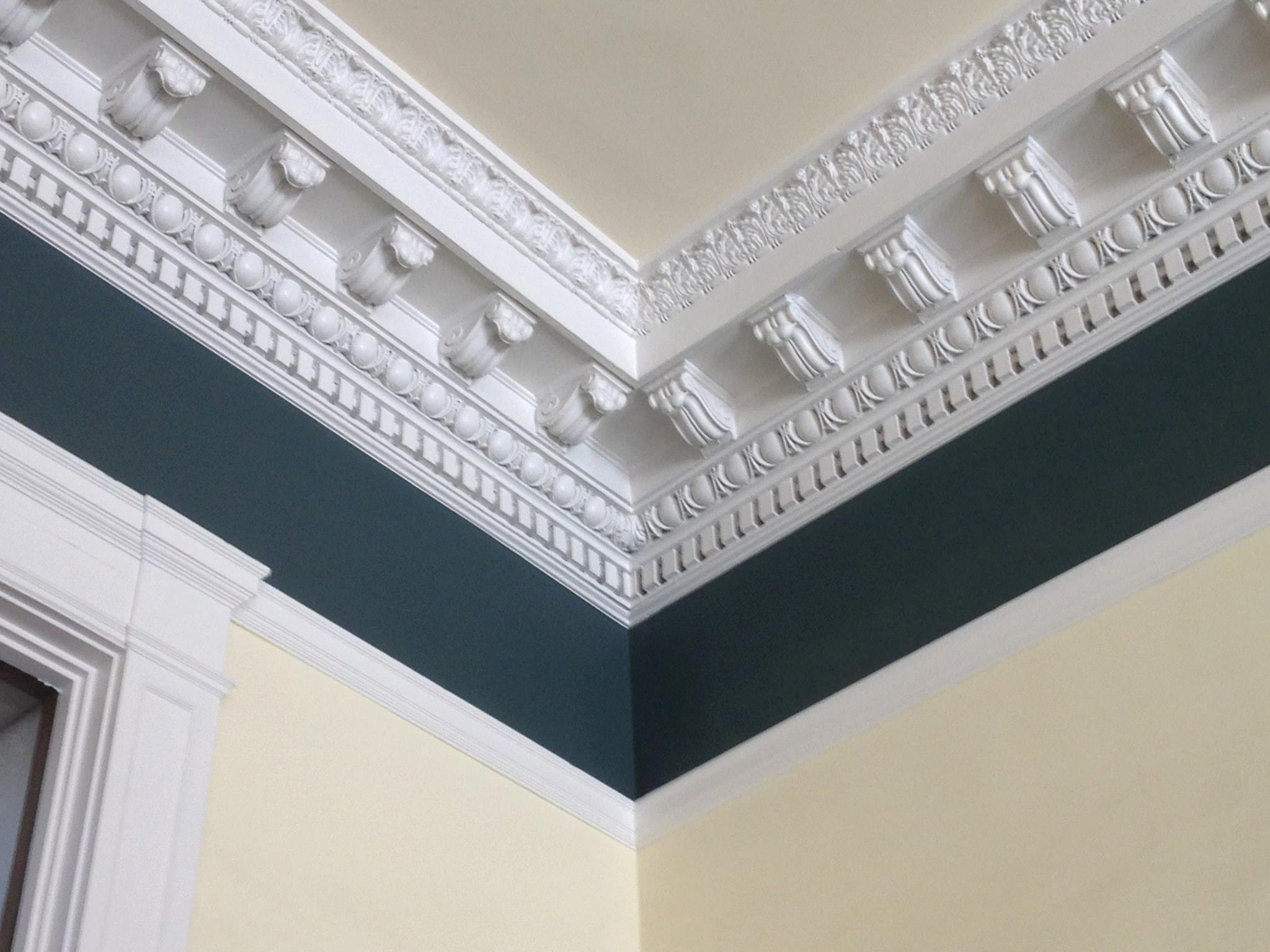 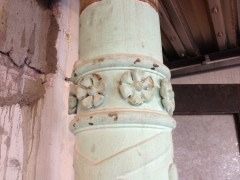 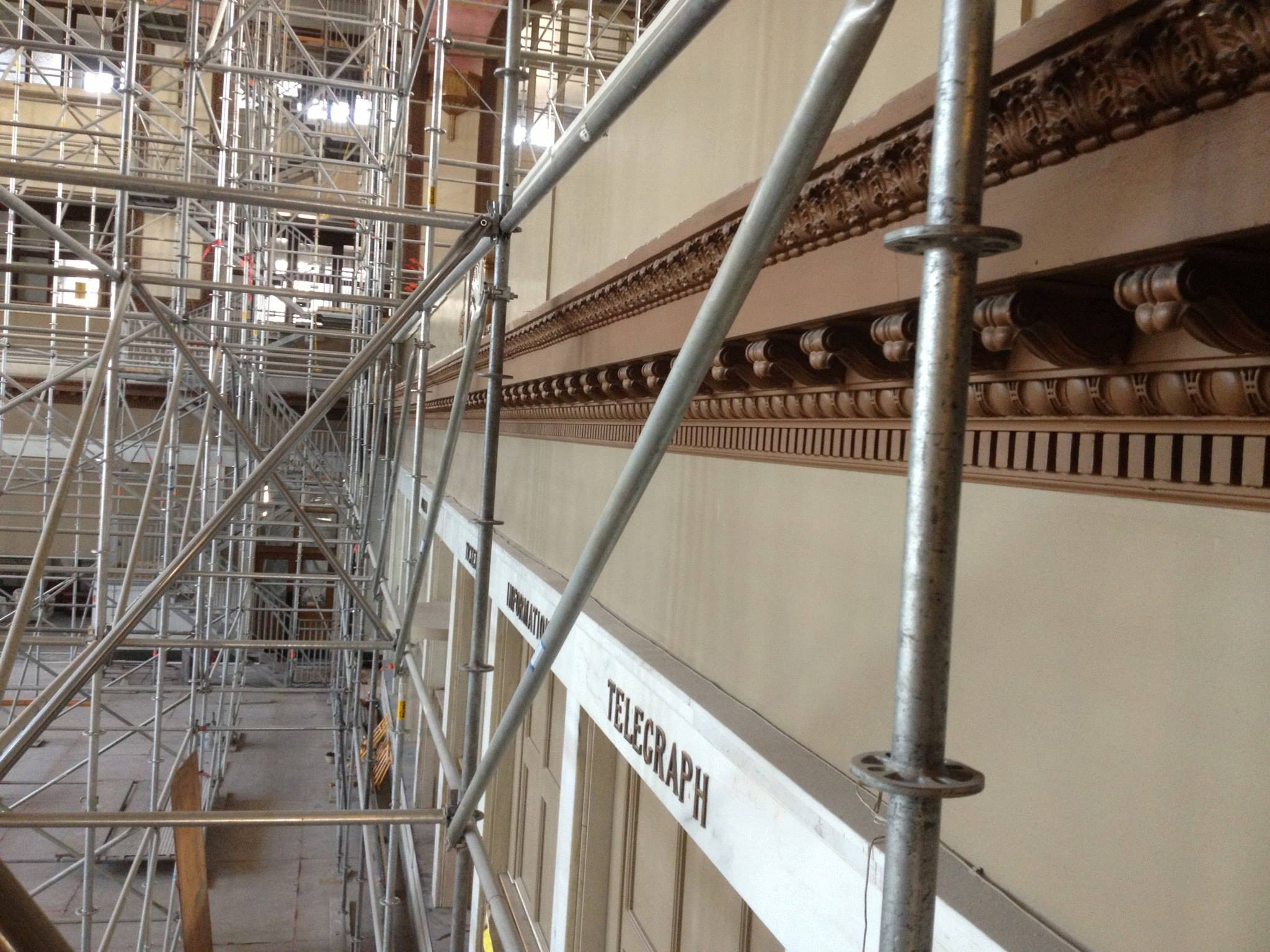 A casualty of modern building and safety codes are staircases such as those inside Denver Union Station that lead to the upper floors. Don’t fret – they’re not being removed or modified in any significant way, but there are other staircases being constructed that meet fire safety standards. To construct a stairwell in an existing structure is difficult, as you could probably imagine. There’s a lot of demolition and reconstruction as they are constructed. 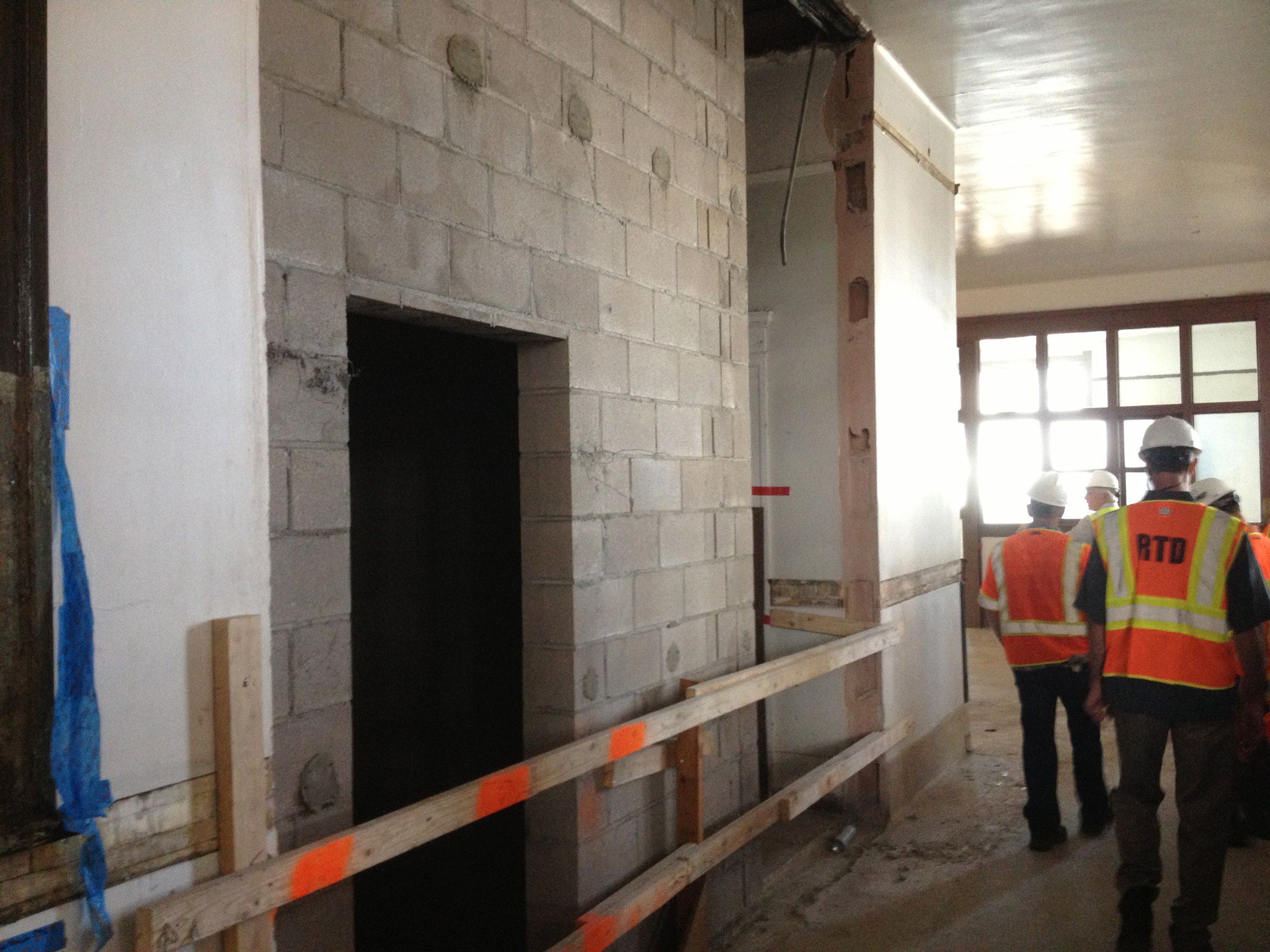 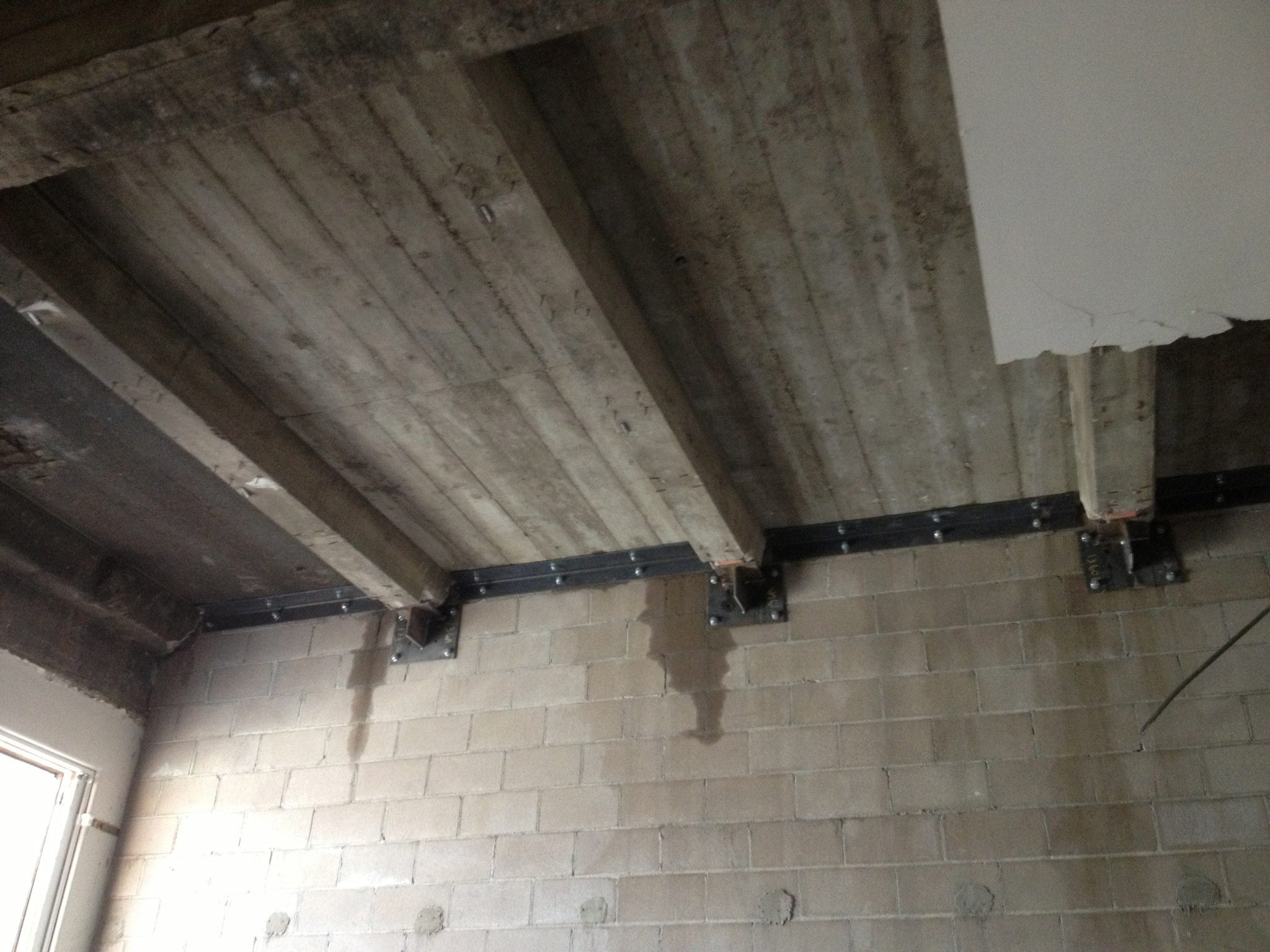 Denver Union Station has very ornate historic staircases leading to the upper floors. Luckily, these staircases aren’t going anywhere. They have been identified as historic elements so they are being preserved. As you can see in the pictures, crews are making every effort to ensure they make it through the renovation with no accidental damage. 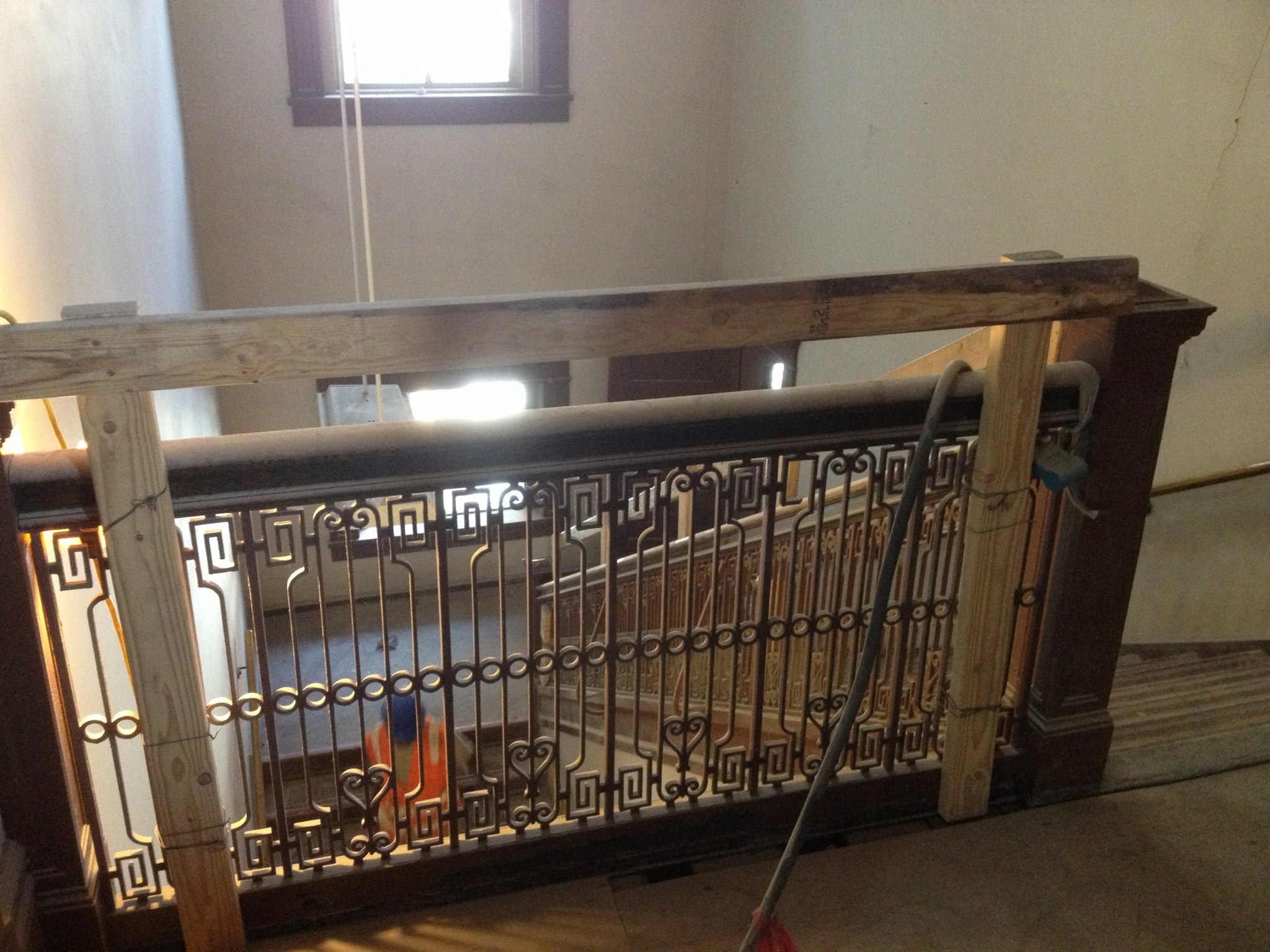 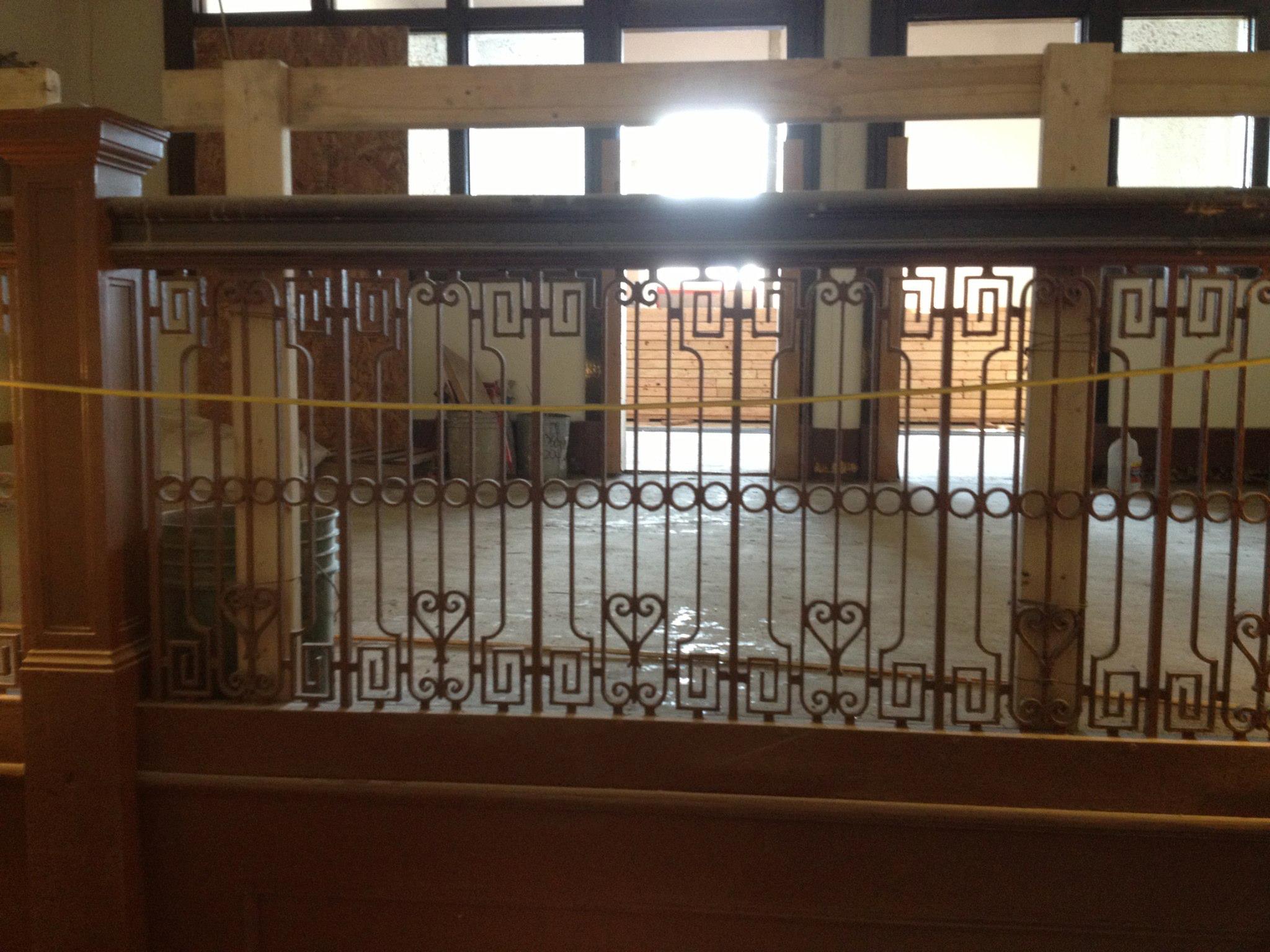 As I mentioned before, the hotel will have 112 rooms, 90 of which will be unique sizes (yes, 90 – that wasn’t a typo). Only 22 of the rooms will have a twin somewhere else in the building. Even the attic of Denver Union Station is being converted in hotel rooms. Not many have been up here before and you can see why in the pictures below. There are awkward roof lines and little ventilation. This will change as a few additional dormers are added to the building as the hotel rooms are constructed. The attic will host some of the larger rooms in the hotel as rooms will be longer to make sure that every room has a window, as required by code. Obviously, there’s a lot of work to do before that happens, but construction is well under way. The large, angled beams will be integrated into the hotel rooms, serving as a nod to the building’s historic past. 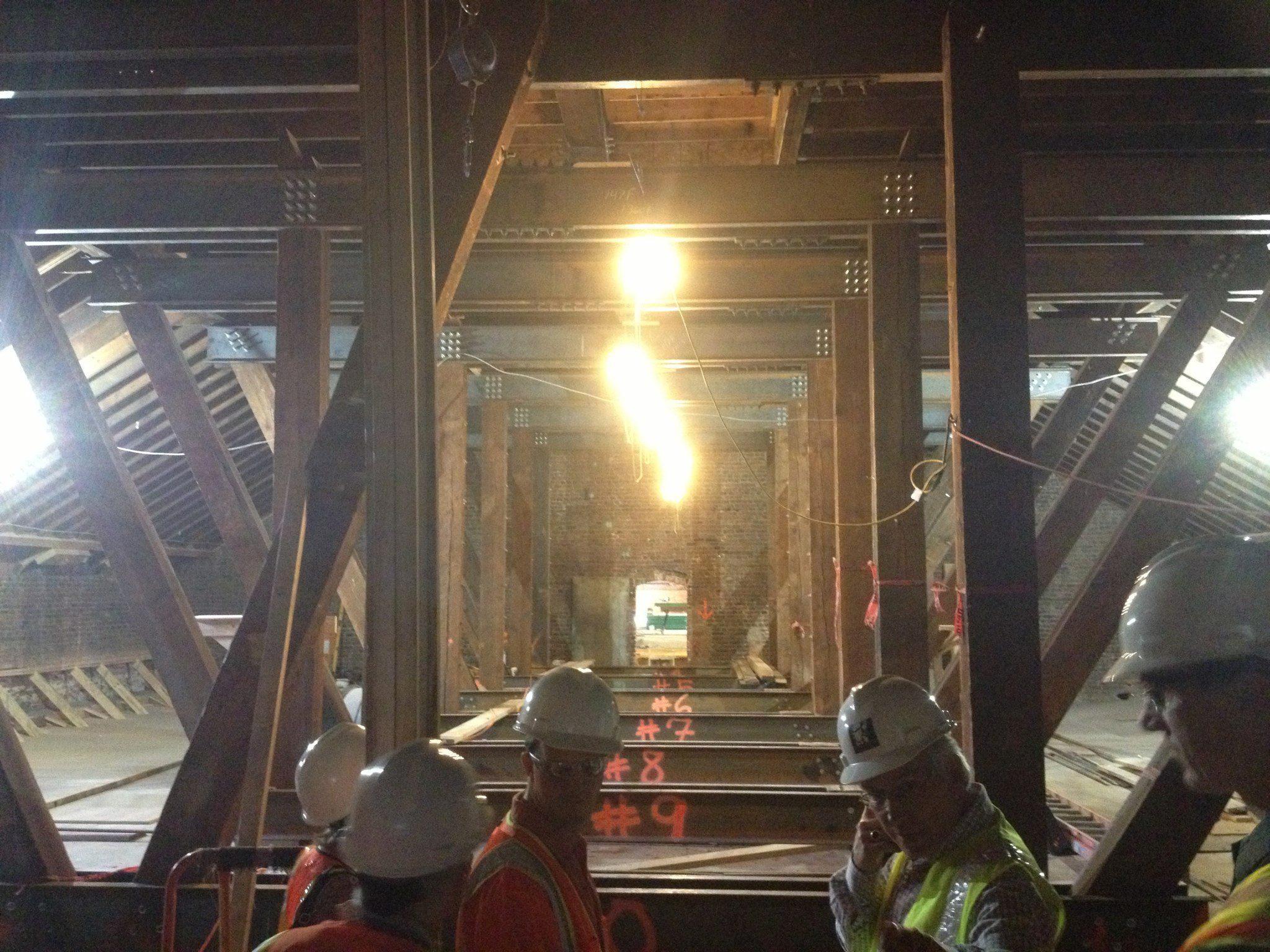 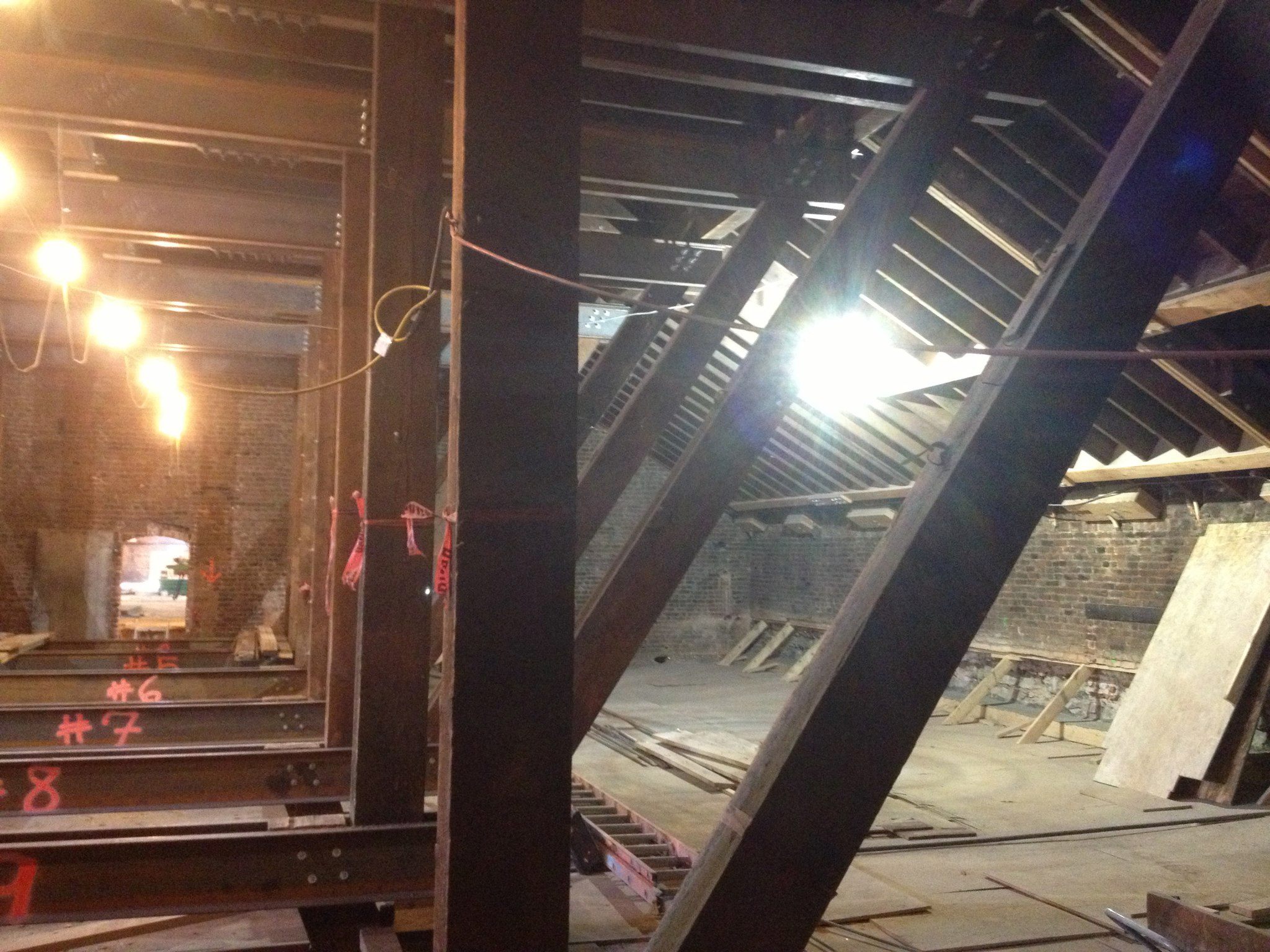 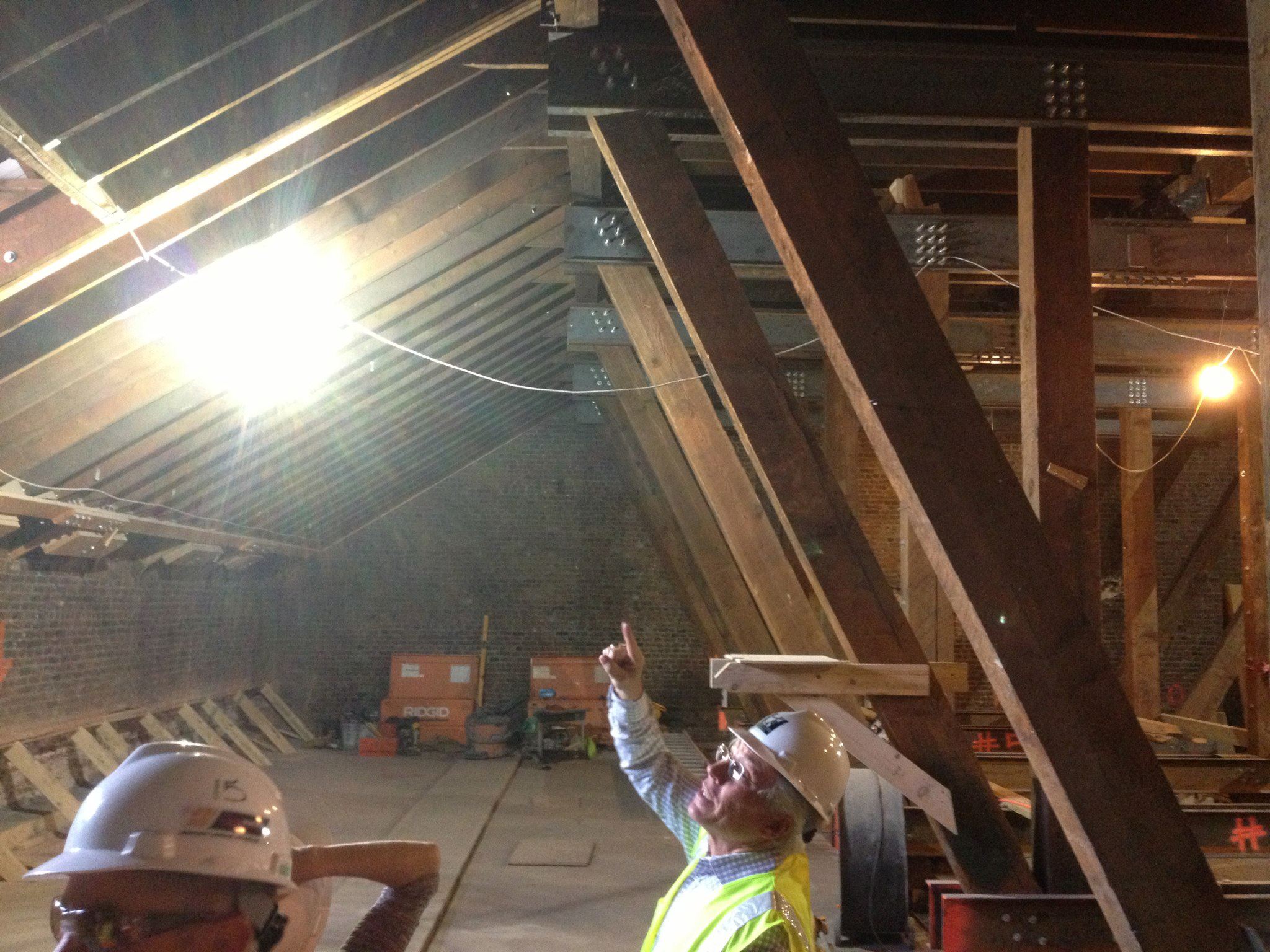 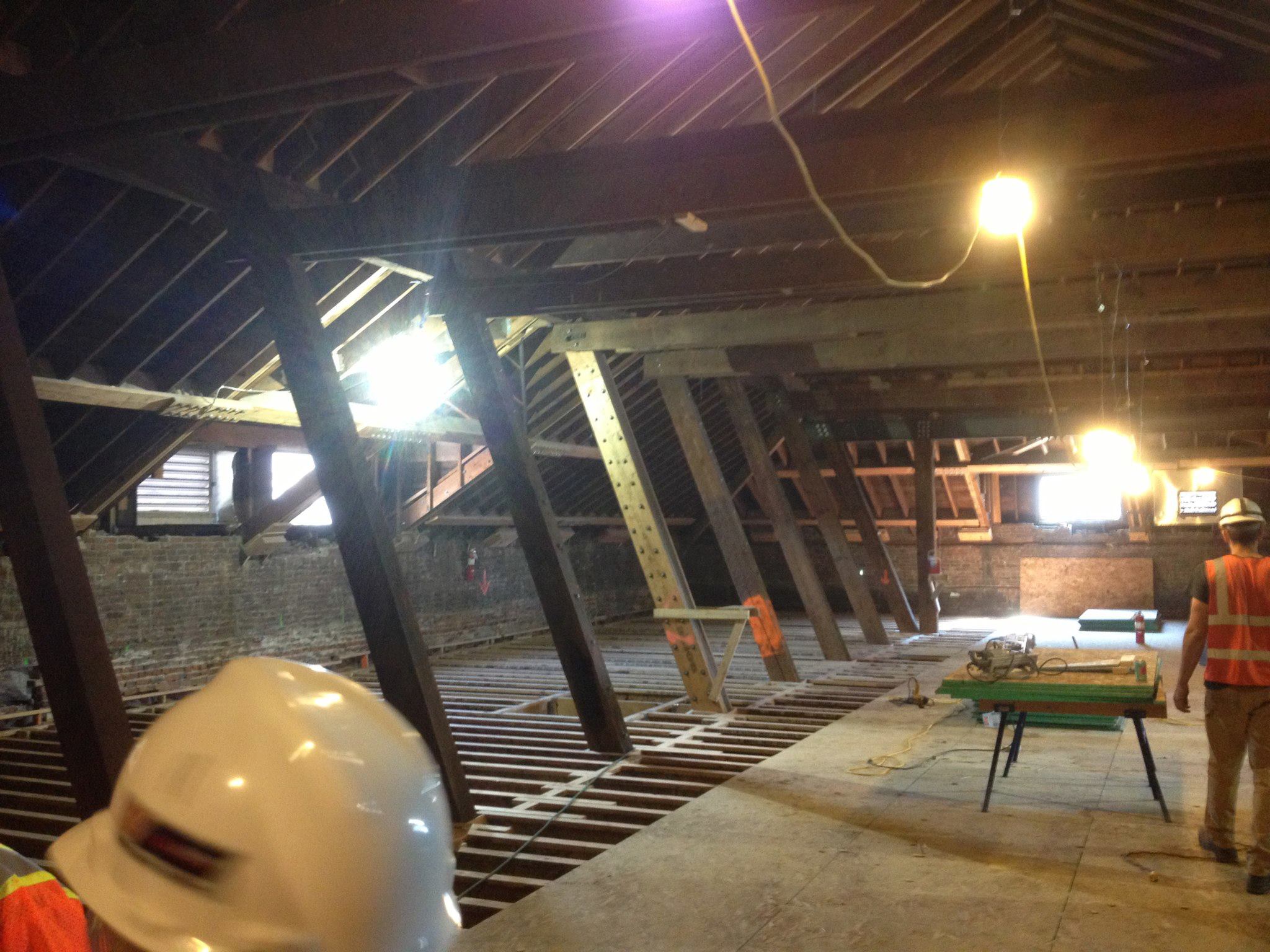 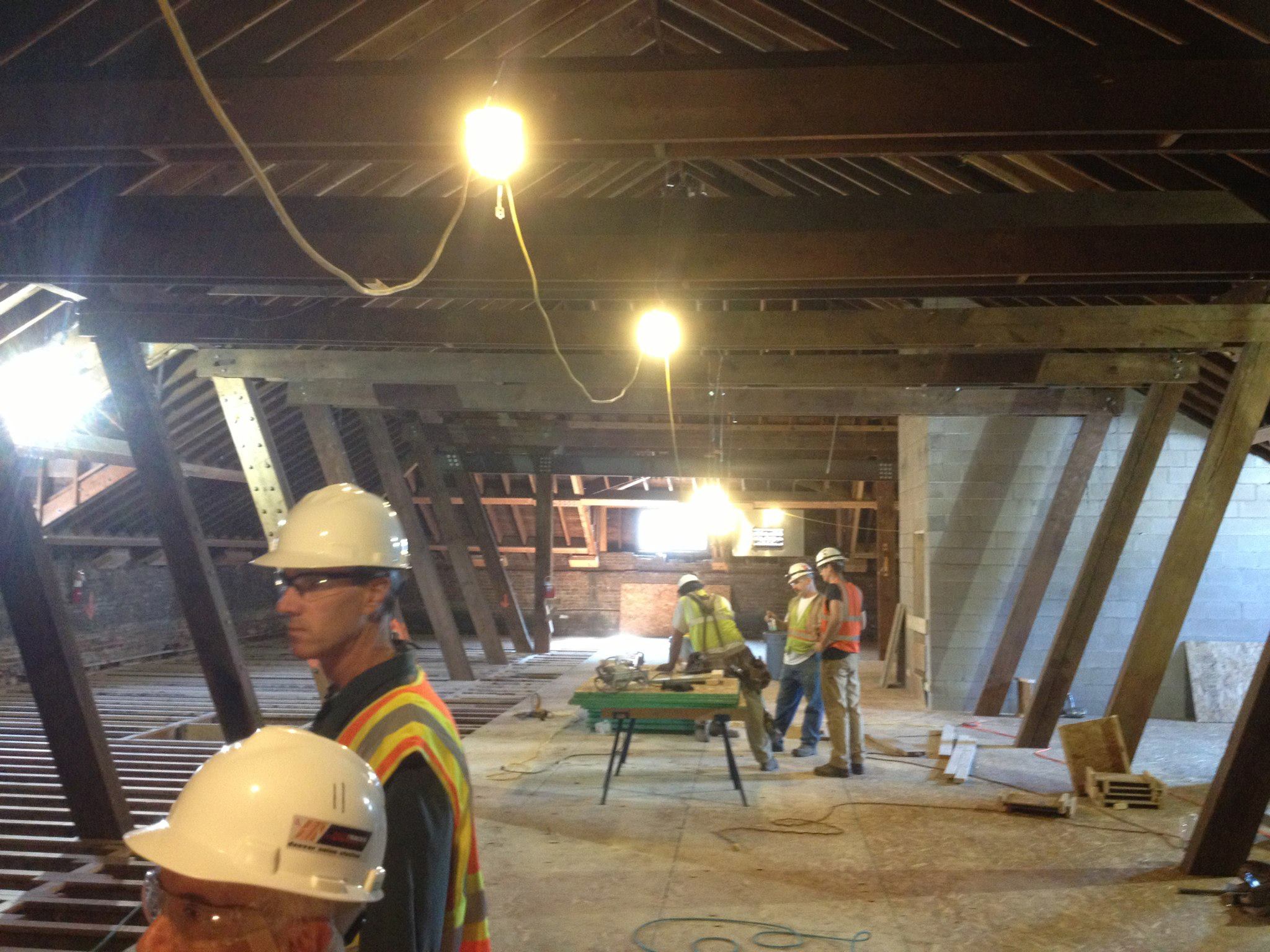 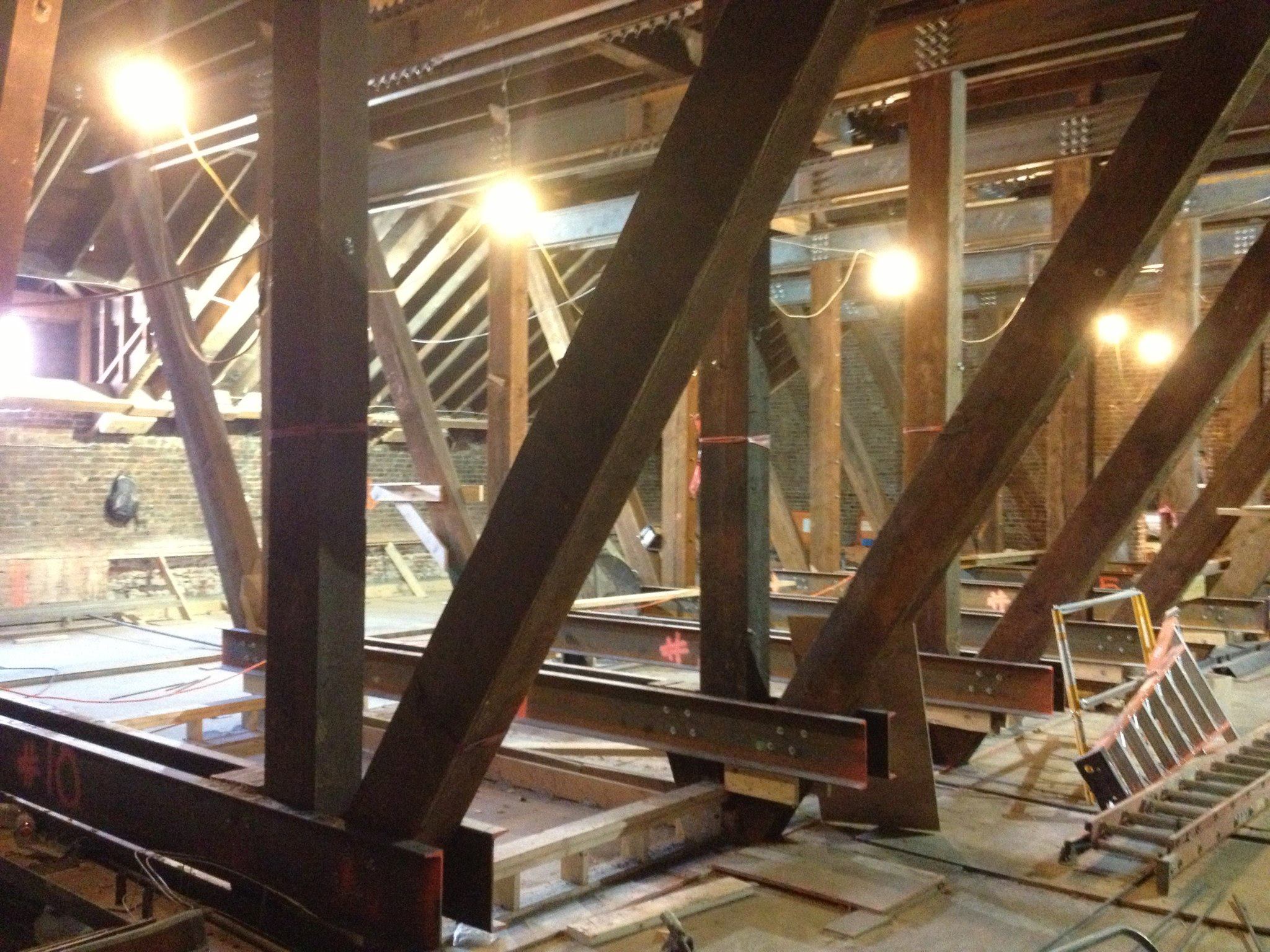 For those who have been in the basement at Denver Union Station may remember a space that looks very different than it does today. What used to be the home of the model railroad exhibit is being transformed into conference space and home to other essential hotel functions. Additionally, Amtrak will have administrative space in the basement. A lot of work has gone into shoring up the foundations down here as well. Crews have been busy installing reinforcing concrete and large steel beams to help support the structure above. A lot of excavation work has occurred as well to help clear the space, even turning up the bones of what Union Station Alliance believe was a horse – and no, they have no idea how that got down there. 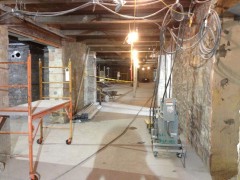 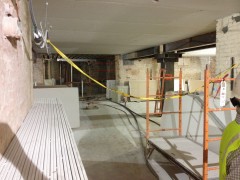 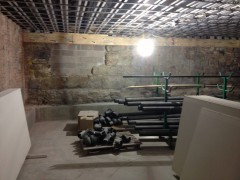 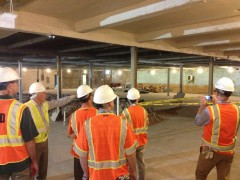 Retail is included as part of the Denver Union Station renovations. As announced by Larimer Associates in May, Denver favorites Snooze and The Kitchen will be opening locations at Denver Union Station in addition to a restaurant and market concept by Alex Seidel. These will be located on the ground floors of the north and south wings. Construction of the retail spaces has opened up the wing buildings into very large and inviting spaces. The posts lining the center of the room will remain as well. 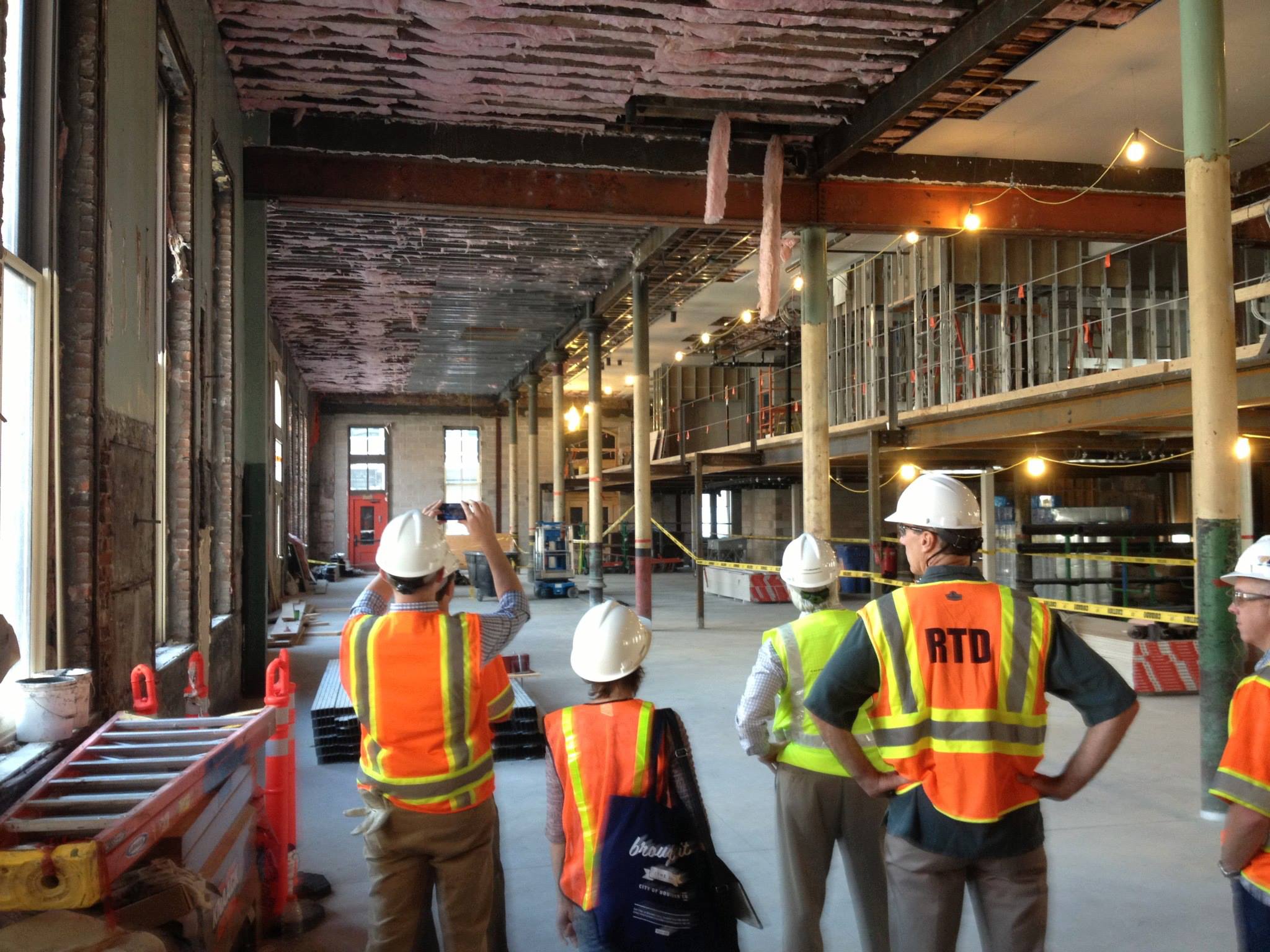 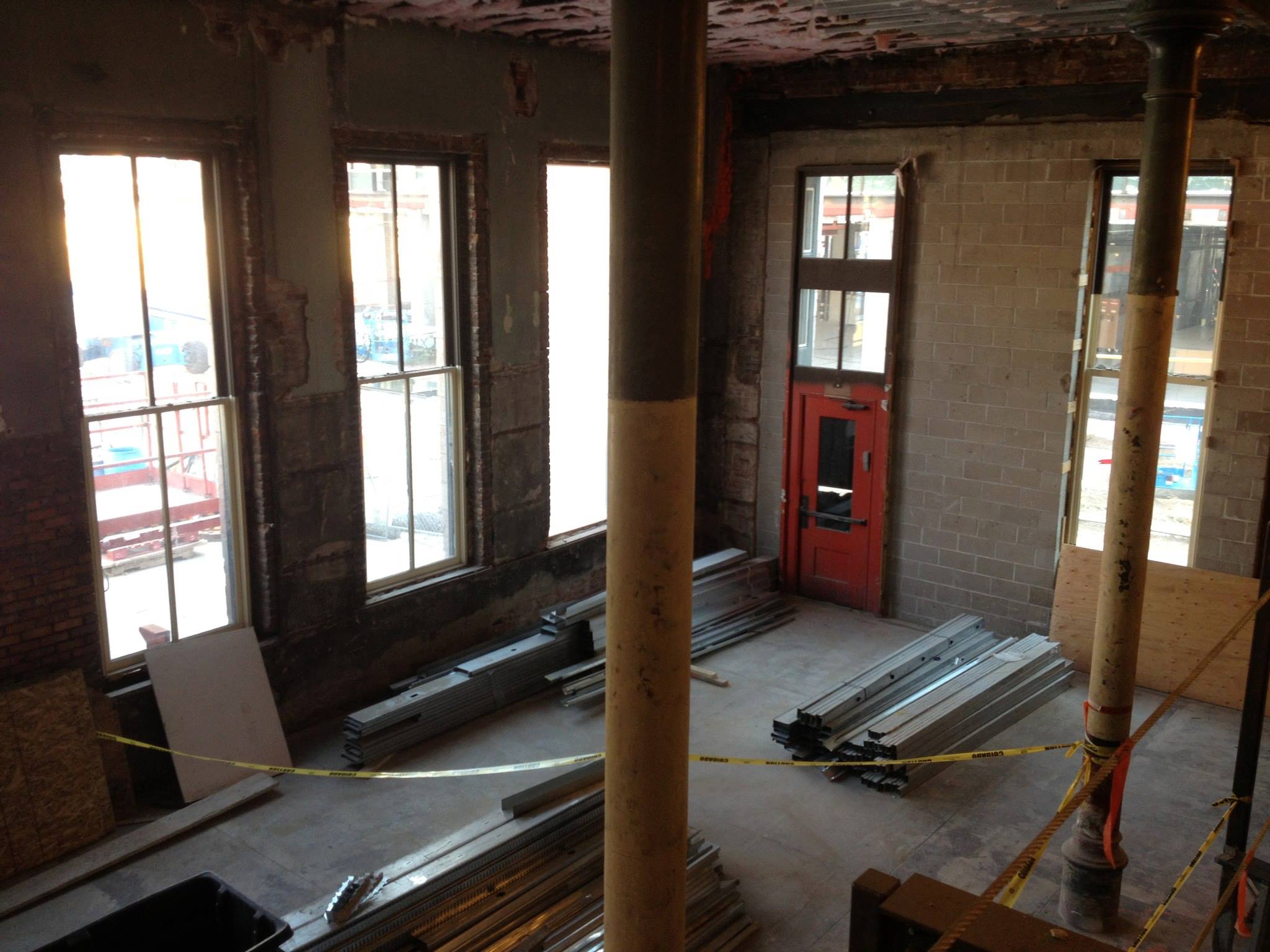 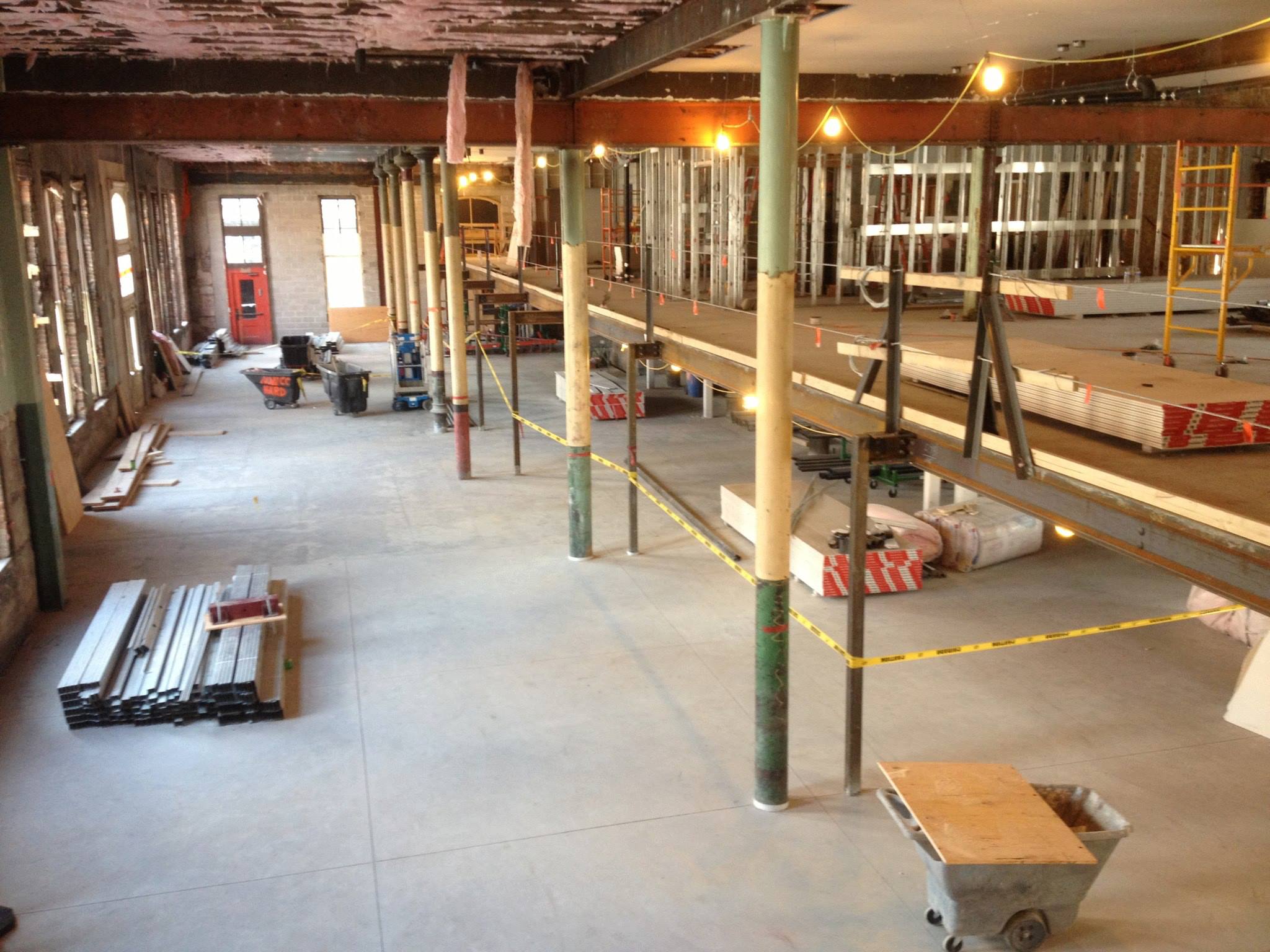 Construction will continue through the fall as rooms are constructed and the Union Station Hotel will open in the summer of 2014!