Is Zoning to Blame for Denver’s Housing Affordability Crisis?

It is well known that Denver is experiencing an affordable housing crisis. Home prices and rents have increased dramatically in recent years, resulting in a situation where half of Denver residents pay over 30% of their income in rent and a quarter pay over 50% (Denver 2015 Housing Report PDF). This is the situation in cities around the country and it has become severe enough to warrant scrutiny by the Obama administration. In September of this year, the White House released a Housing Development Toolkit (PDF) that reviews what the academic literature has to say about high housing prices and provides strategies that municipalities can use to mitigate the issue.

In summary, the report says that high housing prices have been brought about by supply constraints in the form of local land use regulation, namely zoning ordinances. Those ordinances that affect supply include limitations on building heights, restrictions on multi-family developments, maximum floor-area-ratios, minimum lot sizes, minimum building setbacks, parking minimums, historic designations, environmental protections, and bureaucratic holdups. As the housing market is at its core a function of supply and demand, artificially constraining supply through regulations reduces the elasticity of the market and pushes prices upward.

Aside from the basic increase in housing prices, the report says that increased income inequality, gentrification, economic and racial segregation, and long commutes are also consequences of current zoning practices. The report also cites a particularly striking study which concluded that the lack of housing supply in cities with strong job markets has produced a jobs vs. housing mismatch which has reduced the Gross Domestic Product of the entire United States by 10%.

So what is the situation in Denver? Denver’s form-based zoning code adopted in 2010 is a set of regulations outlined in a 1,200 page document and a zoning map. It consists of three-part codes (sometimes four) that specify what sorts of buildings are allowed in a given area. Each code combination can be looked up with the zoning code document to determine the type of development that is allowed in a given zone. An example is U-SU-B, standing for Urban context, Single-Unit houses with alley vehicle access, on minimum lot sizes of 4,500 square feet. 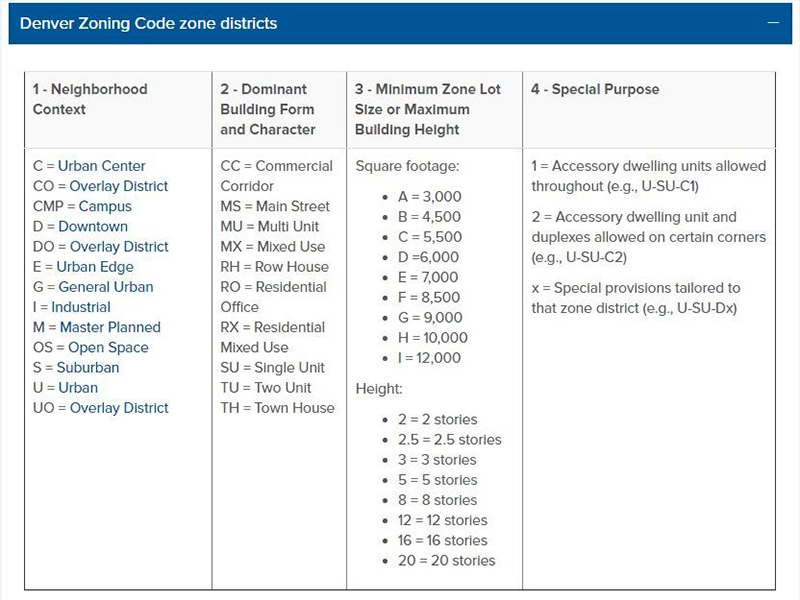 As it stands now, there are over 100 combinations of these codes in use today. If you wanted to visualize the code in terms of residential densities it would be difficult to do so given the many different zoning categories. Therefore I have created a simplified map of my own that consolidates all areas of the city where residential uses are allowed into just seven categories based on the maximum density. Keep in mind this is a map of where different residential densities are allowed based on the zoning, not necessarily where residential densities exist in the current built environment. Click on the image below to enlarge or click here to view/download a PDF of this map. 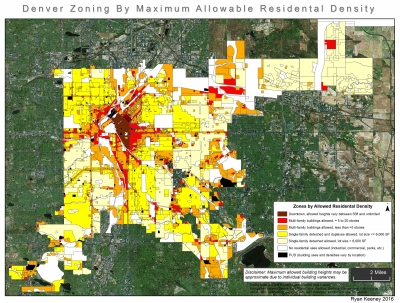 While the code is complex and contains many more nuances than what is shown in this map, I think it is a good place to start a discussion on this issue. I’ll leave it to the reader to conclude whether the density limits mandated by the code are appropriate, or whether or not the code as a whole is a chief cause of Denver’s housing crisis. But it is clear that the city’s current efforts to address affordable housing are only a drop in the bucket. To truly solve the problem, bolder approaches must be taken, and that includes taking a critical look at Denver’s land use regulations.