Walking in Denver Part 4: How Unsafe Streets Play Out at One Intersection

This is the fourth in a series of posts that will review the basics of Denver’s pedestrian infrastructure and new developments that may help you get around. In our first, second and third posts on this topic, we reviewed Denver’s sidewalk dilemma, the city’s primary pedestrian advocates, and factors contributing to Denver’s walkability. This week, we review the final element of walking in Denver: safety.

Denver has seen an uptick in pedestrian- and bicyclist-involved collisions in the past year—as of November 4th, 22 people have died on Denver’s streets. That’s about two deaths in the city per month, and we can all probably agree, it is 22 too many.

What are we doing about this? Mayor Hancock committed the city to Vision Zero last winter. Vision Zero is an international movement that believes that all traffic deaths are preventable. Started in Sweden, the movement has spread to the US and asks cities to commit to a goal of zero deaths on our streets. A simple way to think about vision zero is: what is the acceptable number of your friends and family that die while traveling? Zero is the answer, so zero should be the goal we set for everyone.

Mayor Hancock’s commitment means the city’s goal is to eliminate all traffic deaths on Denver’s roads. While this effort will involve all modes, pedestrians face greater risks by mile than drivers. Interventions that improve sidewalks and slow down cars will need to be a big part of getting to zero traffic deaths. 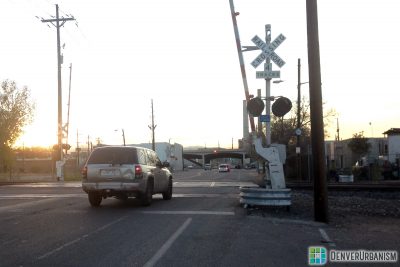 The vision zero coalition was formed  to support the City and County of Denver’s adoption of Vision Zero and the goal of zero traffic fatalities or serious injuries. The coalition’s lobbying recently led to an extra $500,000 in the 2017 budget for Vision Zero efforts to improve intersections outside of the city center. However, gaps remain between the city’s commitment and its budget priorities, as Streetsblog recently explored.

Public Data: As part of Denver’s Vision Zero efforts, it has published a public “crash dashboard” of traffic collisions. You can use this tool to look up how many collisions have happened in the past few years, at any intersection in the city.

Using this dashboard, we looked at 13th Avenue and Broadway. This intersection is a good illustration of why pedestrian environments are more complicated than you’d think, as discussed in our last article. On the surface, this intersection just south of the State Capitol, the Central Library, and downtown seems reasonably safe: wide, well-kept sidewalks allow the many pedestrians around to comfortably walk to many of the nearby destinations. To cross the intersection, pedestrians receive walk signals at every traffic signal cycle, allowing crossing on two sides of the intersection via wide crosswalks that are present at all four crossing areas. There’s a lot to walk to, nearby bus stops, and the wide sidewalks keep pedestrians reasonably well-separated from cars. It passes many of our walkability criteria.

Despite the wide sidewalks, this area is still dominated by cars. Broadway is five lanes wide where it hits 13th Avenue—not counting two parking lanes that make the road seem even wider, just north of the intersection. 13th Avenue has four lanes of traffic when it hits Broadway. That’s simply a huge area dedicated for automobiles.

Many pedestrian-car collisions happen when cars are making turns at intersections. At this intersection, pedestrians receive a walk signal when the light for parallel car traffic is green. This means that pedestrians are crossing the street while cars also have a green light to turn. The dashboard data tells us that six of nine of these pedestrian-car collisions occurred when the car was making a left turn, that is, turning from westbound 13th Avenue onto southbound Broadway.

On October 30th, Karina Pulec, a 28-year-old lawyer, was struck and killed at 13th and Broadway. The driver fled the scene, but turned himself in four days later. Pulec was crossing 13th Avenue when she was hit by the driver, who was turning left from 13th onto Broadway. We don’t yet know why Karina Pulec was killed, but as a Vision Zero city, we need to start highlighting each and every single death. Yes, drunk drivers, distracted drivers, and negligent drivers contribute to thousands of deaths each year. But the design of our streets also plays a part in protecting pedestrians from errant drivers and giving them a safer place to walk.