Forgotten Denver: The Train to Golden 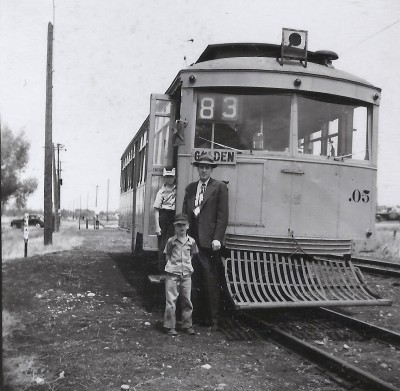 On the eve of the opening of the first completed line of RTD’s FasTracks transit expansion, it is a good time to pay homage to Denver’s storied history of streetcars and interurbans. During the early 20th century, Denver had one of the nation’s largest streetcar networks, consolidated under the name of the Denver Tramway Company or DTC (not Denver Tech Center!). It was ruled over by the streetcar titan William G. Evans, who had his headquarters in the Tramway Building, today’s Hotel Teatro.  The metropolitan system consisted of over 250 miles of track with an additional 40 miles of track on interurban lines to Golden and Boulder. By 1950, the last of the street car routes were abandoned as the Denver Tramway finalized the conversion of all its system to buses. The company morphed into RTD, or the Regional Transportation District, by 1974 and has been working to put back into place a cohesive system of rapid transit ever since.

The fascinating notion however is that we’ve been there, done that. What was seen as old and out-dated in 1950, is quickly gaining traction as an integral part of comprehensive metropolitan area transportation systems once again. Some Denverites around today can, in fact, still remember riding an interurban train to Golden or Arvada or Boulder!

In honor of the opening of RTD’s new West Rail Line, let us take a quick look at Denver’s past history of transit along this corridor. You might be surprised to learn that for years, RTD kept possession of the right-of-way that the old transit line between Denver and Golden once used. This helped facilitate the construction of the new line, since rail-based transit could more readily be returned to a corridor that had more or less never lost the shape of what it had been!  In 1890, the Denver, Lakewood and Golden Railroad was inaugurated. By 1909, the line was purchased by Denver Tramway and converted to an electric line. The line dropped off downtown at the Interurban Loop at 15th and Arapahoe. The nearby Central Loop took commuters to other parts of the city. If you were riding back to Golden, you’d look for the Villa Park/Golden car. Of course, Villa Park is the name of the neighborhood where the West Rail Line will once again be offering service, with stops at Knox and Perry, as it makes its way down the Lakewood and Dry Gulch greenways.

The Four Seasons Hotel now sits partially on the site of the Central and Interurban Loops near 15th and Arapahoe.  This streetcar is bound for Golden. Photo credit: Kevin Pharris

In Kevin Pharris’ new book, Riding Denver’s Rails, he captures some of the long-ago memories of riding the interurban between Denver and Golden and the impression it made on these young people, at the time:

Darrell P. shared some of his memories. “I rode [the interurban] from downtown Denver, the old Loop Market, to go fishing in Clear Creek. The thing that impressed me the most about riding it was when the motorman got it cranked up to its top speed, somewhere in what is now western Lakewood. The car would start rocking back and forth and you would wonder if it was going to jump off the track. It never did, of course.”

Bob P. shared some of these perceptions. “I am sure [everyone who rode the interurban would] remark about the wild ride. Though it had a wider gauge track than the similar streetcars, its ride was so fast and the roadbed so uneven we were sure the lurching would result in our being flung, spinning, tumbling far off the tracks. It was then that I first associated the words MORTALITY and ME. Anyway, it was cheaper than the rides at Elitch’s or Lakeside!”

Some lament the loss of the streetcar after World War II. It was abandoned in cities across the country in favor of the automobile. Investment monies were generally not available to maintain the system, and the public looked at rail-based transit as a tired relic of the past. Without public support, streetcars were pulled out in almost every part of the nation. Consider that this time period also saw the mass removal of another hackneyed and embarrassing reminder of our past: Victorian architecture! The new world would no longer travel at the creeping pace of the streetcar by buildings that had been around before humanity bested the atom; a new era was dawning—the age of the automobile and parking lot. Now we’re putting a lot of it back in place again. Let’s hope our future citizens and leaders will continue to be so forward thinking by offering residents a choice in transportation options and development patterns. 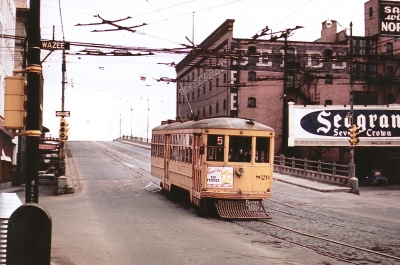 For more information on this subject, consult:

Or visit with Kevin at the Lakewood-Wadsworth Station Party on Saturday, April 27 to learn more about the city’s past transit history.