Time to take a look at the last station on our newest light rail line. The Jefferson County Government Center/City of Golden Station (quite possibly the longest station name ever) is located just to the south of the famed “Taj Mahal” Jeffco Courthouse at 6th Avenue and Johnson Road.

The station has a 705-space parking garage next to the platform for passengers. The garage is one of the nicest looking garages that RTD has constructed and it meshes very well with the architectural style of the nearby courthouse. The garage is ready for opening day – the spaces are already striped. 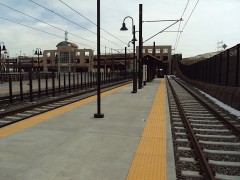 RTD has provided both racks and lockers for those who will be arriving or departing the station on their bikes. Easy connections to the Highway 93 bike path are ready to go to the north of the station as well.

One of the coolest features of this station is the tunnel created by constructing the garage over the tracks and into the hill to the west. The train come in on the first level of the parking garage, making this the only station in RTD’s light rail network where you can park above the train. Makes for some pretty interesting and unique sight lines as well.

Another very cool feature of this station is the fabricated concrete retaining wall to the west of the station. This was molded and painted to look like rock – I think they did an amazing job. There were several people fooled on the test trains I’ve ridden on.

DenverUrbanism will be West Rail Line-centric this coming week as we approach the opening. We’ll be taking a look at the history of the West Rail Line with Shawn Snow from History Colorado. Derek Berardi will give us a look at how some can live life without a car and focus solely on transit (including light rail). Ryan Dravitz will help us coast through biking along the West Rail Line. I’ll give a construction summary and what this light rail corridor could mean for the west side of metro Denver. Ken Schroeppel and Robert Wilson will keep us plugged in on the grand opening ceremonies and everything that goes on during the upcoming free fare day (April 27th). Make sure to check DenverUrbanism for the latest on the West Rail Line over the next week!