This is a special edition of my #cityforall blog series, prompted by discussions regarding Initiative 300 on 2019 Denver Municipal Ballot and the controversy surrounding Beloved Community Village.

I’m not an expert on homelessness; it’s a complex social issue that I don’t pretend to have a solution for. But I took it upon myself to talk to some folks who work with people experiencing homelessness and did some research on the zoning code that regulates our land use. I also did some “architectural doodles” to think through and illustrate how we could address the problems that I learned about.

Architectural doodle illustrating how a typical residential zone lot in Denver can accommodate a community of 11–14 individuals within “Urban House with ADU” building forms. 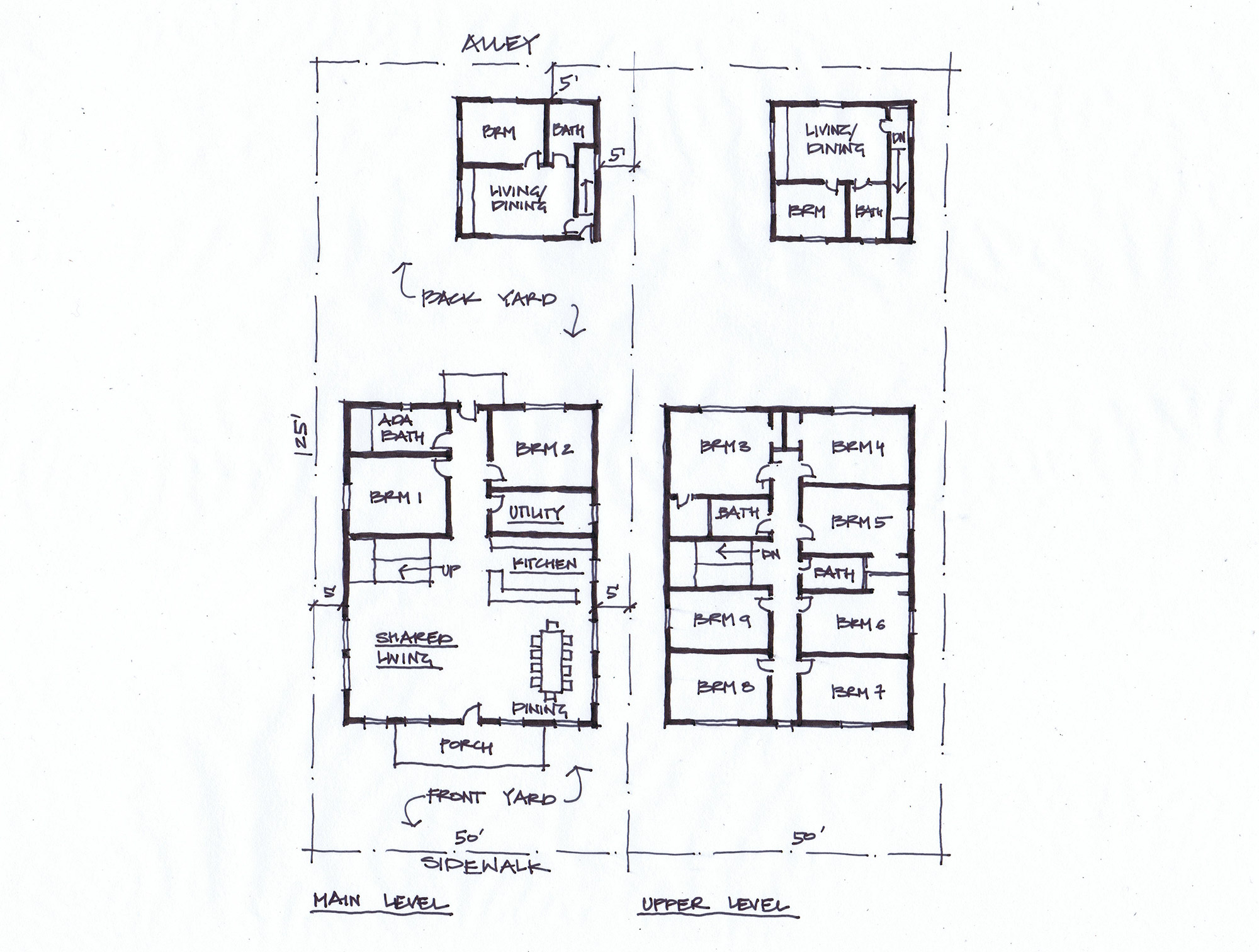 What I learned is that people with a history of homelessness need a sense of community but also autonomy. That’s why The Beloved Community Village is successful. People living there stay in individual tiny homes (bedrooms) but share common facilities such as restrooms, showers, and community space. They also self-govern. It gives them a sense of dignity and independence. However the “village” is subject to special permits, the structures have no permanent foundations, and residents have to go outside to use shared facilities.

So what if we used building forms that are already allowed in the zoning code to accommodate this type of group living arrangement? We could accommodate 11–14 individuals in a permanent structure. We could allow them to integrate into communities. They could live near transit, services, jobs, schools, and parks. From the outside, the structures would blend with the traditional residential architecture of Denver neighborhoods.

While this solution seems simple and logical, “Rooming and Boarding Houses” are not allowed in the Single Unit, Two Unit, or Row House zones in Denver’s zoning code, nor is the “Student Housing” use. The “Shelter for the Homeless” use is subject to limitations including (among others) a public hearing and committee oversight. All uses are subject to parking requirements.

And so students, low-income folks, and people who are trying to move out of homelessness are not allowed to share structures that are already permitted in Denver’s zoning code. Because our residential neighborhoods are predominantly zoned “SU” (Single Unit), Denver effectively regulates against these populations and prevents them from participating in the benefits of neighborhood living.

“The group living code is a major barrier to non-traditional and more community-based ways of living that often better accommodate people who have gone through the traumatic, alienating experience of homelessness,” said Nathan Hunt of Interfaith Alliance of Colorado.

“We’ve seen this with tiny homes, SROs, the Catholic Worker house, and other creative ways to create affordability with community. The same is true of parking minimums imposed on communities that typically don’t have vehicles and disproportionately use transit. We need cities for people—in all the shapes and sizes and lifestyle preferences people come in. It’s time to adapt the code to facilitate housing for all, and we can do that in ways that still keep the character of the city and neighborhoods we love.”