A common refrain from people who don’t want to see change in the way we handle our transportation system is that “people have cars and they won’t get rid of them.” Or, “it’s impossible to live in Denver without a car.” Or my favorite, “you can’t force people to walk and bike in some socialist utopia, they want to drive!”

All these arguments boil down to missing the forest for the trees. I put it forward that we don’t need to do anything so drastic as making cars illegal in order to affect commute share, only that we need to stop subsidizing one particular transportation mode—driving. 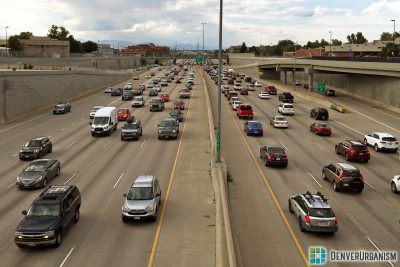 Driving and car ownership are subsidized in a multitude of ways, from expenditures in the general budget for street maintenance, to the zoning code that forces all housing to include car storage. We subsidize driving by designing our neighborhood streets to allow fast driving while discouraging walking and making bicycling dangerous. Our whole city has been configured to move cars at speed, store cars at every location, and generally make the lives of car owners easy and cheap.

I say that if we simply remove the many subsidies we provide to car drivers—that is, if the full cost of street damage done by cars was borne by drivers, if the necessary amount of parking was decided by the market instead of the city code, if neighborhood streets were designed to move people around their neighborhoods instead to move cars through them at high speed—then people would make rational decisions in response. They would live closer to work, walk and bike more to their needs, and neighborhoods would be developed with services that support nearby customers instead of giant parking lots and high speed arterials.

Increasing car-specific taxes to cover infrastructure maintenance holes currently plugged by general revenues would cause more people to re-examine their choices. Decreased opportunities to park would cause them to consider alternate travel modes more often. Lower speed limits or differently configured streets would cause them to look for conveniently placed services and jobs nearby instead of focusing their desires on huge driveways and tiny lawns.

Some people would inevitably choose, as is their right, to continue with their daily 15-mile commutes and drive to every necessity, but others would decide that maybe driving and searching for parking aren’t all they’re cracked up to be. Maybe they’d look for neighborhoods that support their lives instead of their driving habits. The best part is, we don’t have to force anyone to do anything; we simply build a city that works for people instead of for cars and then watch as our citizens make rational decisions regarding their own needs within the newer, more efficient system.