Walking in Denver Part 1: Whose Sidewalk Is It Anyway?

This is the first in a series of posts that will review the basics of Denver’s pedestrian infrastructure and new developments that may help you get around.

Denver has got some great places to walk to, from the Zoo to your neighborhood park; every neighborhood has somewhere to go by foot. Yet what makes a walk around the block possible? There’s a lot that goes into pedestrian infrastructure, and a lot of talk about sidewalks lately. This first part will look at the most basic building block of the pedestrian experience: sidewalks. Denver has some challenges with its pedestrian infrastructure, as DenverUrbanism wrote earlier this year.

What’s the big deal?
Around 250 miles of Denver’s streets do not have sidewalks. In addition, crowdsourced-mapping through WalkDenver’s WALKScope shows that 35% of mapped sidewalks in Denver are in poor or very poor condition. This problem isn’t unique to Denver either: Colorado cities are missing an estimated total of 6,000 miles of sidewalks while 8,600 miles of sidewalks need to be repaired. Statewide, we’ll need an estimated $134 million every year for the next 25 years to fill this sidewalk gap, according to a study released this summer by CoPIRG and SWEEP. 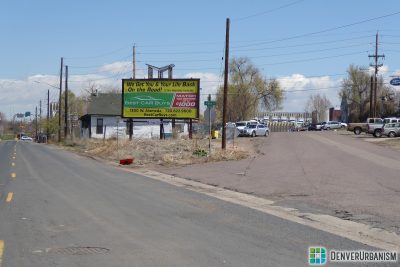 In Denver, problems stem from the fact that the city places responsibility for sidewalk construction and maintenance on adjacent private property owners. But requiring private property owners to pay for a public good hasn’t led to a great sidewalk network, because not all property owners know (or care) about this requirement and many may not have the disposable income to take care of it. The problem gets worse because the City of Denver does not commonly enforce sidewalk conditions and, as a result, many streets don’t have sidewalks or the sidewalks haven’t been repaired for decades.

Why do sidewalks matter?
Safety: An incomplete sidewalk network has a number of dangerous effects. A lack of sidewalks can force pedestrians into the street or to make unsafe crossings, leading to collisions and sometimes pedestrian deaths. People who use wheelchairs, or have other mobility limitations, cannot traverse heavily damaged sidewalks. At a city council meeting last year, some of Denver’s wheelchair users told of being shut-into their homes, unable to participate in society, due to poor infrastructure.

Health: The most deadly impact of poor sidewalks may be a more slow-acting threat: a lack of good sidewalks can serve as a barrier to physical activity. According to the CDC, 57% of Denver metro adults are overweight or obese and 16% report getting no physical activity in the past month. Obesity and overweight status has negative effects on overall health, in addition to massive costs for all of us. Medical expenditures attributable to obesity exceed $1.6 billion annually—in Colorado alone. 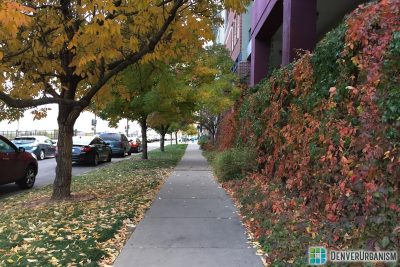 Happiness: On the brighter side, a recent Gallup-Healthways report found that cities that promote active living have happy and healthier residents overall. Denver’s well-being score ranked 13th among major U.S. metros. Sidewalks and safe places for people to walk (or run, or push a stroller) are a fundamental piece of the active living puzzle, opening up doors to walking as transportation, walking to transit, walking for exercise, and walking with friends.

Business: Sidewalks are good for business, too. Places with good walkability can command higher office and retail rents and can generate 80% higher retail sales, compared to places with fair walkability, according to the Brookings Institute.

Transit: Sidewalks are closely related to the success of our transit system. Mile High Connects, in a study on First and Last Mile Connections to transit, found that sidewalks were the most important piece of infrastructure connecting people to transit. The consistent underfunding and inadequacy of first and last mile connections has implications across Denver, such as reducing the use of our transit system and disadvantaging low-income and minority communities.

Lastly: a lot of our population doesn’t drive, despite what traffic on I-25 might tell you. Some seniors don’t drive, along with all children under 16, some people with disabilities, recent immigrants, and people who cannot afford car ownership or shared vehicles. Many other people simply choose not to drive, and walk, bike, or take transit instead. When you’re not driving, you’re relying on sidewalks and other public infrastructure more.

Sidewalks matter for every resident in Denver. Those in wheelchairs or those without cars may rely on them everyday. But sidewalks benefit those who drive too, since a walkable environment supports other investments and public goods like local businesses, transit, and community health. Often, they’re so integral to Denver’s great places that you don’t notice them till they’re not there.

Our next article will look at new developments in sidewalk policy and the key players involved.

Jenny Niemann is a graduate student in the University of Colorado Denver’s dual-degree in urban planning and public health. Her graduate work involves alternative transportation and healthy food systems and how the benefits of these sustainable city services can be accessed by households of all incomes. A native of the suburbs of Washington, DC, Jenny enjoys exploring Colorado’s growing cities and mountains by bicycle.