What exactly does it mean to be a Smart City?

The most exciting part for many urbanists, technology innovators, open data proponents, and transportation and social justice advocates may, in fact, be the lack of a clear answer. However, through recently announced support from the U.S. Department of Transportation (USDOT) and Transportation for America, Denver may be in the driver’s seat to develop their own, unique definition.

The idea of a Smart City—which received significant attention through the highly-competitive Smart Cities Challenge grant offered by USDOT in 2015/2016—is to leverage rapidly evolving technology to meet increasingly complex transportation challenges in urban centers. For instance, according to Transportation for America, 85 percent of the country’s total population now lives in urban areas. While this illustrates the immense demand for urban living and a renewed investment in our cities’ centers, it also underlines mobility challenges that arise with denser populations, such as continued dependence on manual, single-occupancy vehicles, as well as growing transportation disparities for low-income and minority groups, many of whom are technologically disconnected. 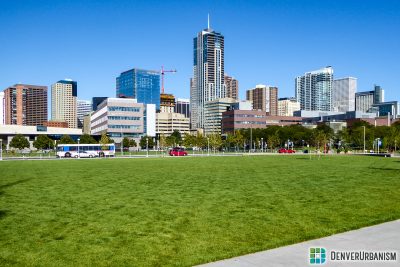 Overall, a Smart City looks to address these symbiotic challenges by seeking solutions that emphasize data collection and sharing to publicize successes and failures in transportation innovation; promote a willingness to take on risk and serve as a mobility incubator; leverage partnerships, both with cities and private industry, to fund projects and offer a maximize return on investment; and increase equity in problem-solving so that all people’s needs are captured, especially those who are transit-dependent.

The enthusiasm that the Smart Cities Challenge sparked, which garnered 77 applications from nearly all mid-to-large-sized cities in the U.S., demonstrated the urgency and opportunity cities feel in improving and maximizing their transportation systems for increasingly diverse populations. While Denver was one of seven finalists, the final award—an unprecedented $50 million—went to Columbus, Ohio.

However, October produced two new developments in the advancement of Smart Cities, both which recognized that 76 cities were left sitting on Smart City plans without the necessary assistance to propel them off the ground. As a result, USDOT announced an additional $65 million to cities for advanced technology in transportation, $6 million of which will be awarded to Denver to alleviate congestion through “connected vehicles.” This insinuates Denver’s desire to increase modes of transport—such as single-occupancy vehicles, buses, future automated vehicles, or car and ride shares—that are equipped with internet access and a wireless network. These advances would make possible communication between cars, public transit, and infrastructure like stop lights and nearby stores, all with the goal of providing an increased flow of information that increases the affordability, diversity and efficiency of mobility choices.

Additionally, a public-private partnership between Transportation for America and Sidewalk Labs just announced assistance via a new Smart Cities collaborative, with Denver selected as one of 16 cities nationwide, alongside the likes of Austin, Boston, Seattle and Washington, D.C. This collaborative of cities, which will incorporate Denver’s primary goal of increasing “mobility freedom,” will work to implement smart city policies, share best practices and pilot new programs in three key areas: automated vehicles, shared mobility and the utilization of performance measures and data analytics.

In recent years, USDOT, municipalities, and other public and private sector partners have fast recognized the growing perfect storm of urban conditions and technological advances that could lead cities to develop innovative solutions to move people more efficiently, affordably and equitably. James Corless, director of Transportation for America, notes that current changes underway will represent the biggest shift in transportation and mobility since the advent of the interstate highway system in the 1950s.

However, as with most innovation, cities must either get ahead of the curve and decide what transportation will look like for their city, or they will be left to be shaped by the decisions that other players make. With a population increase of more than 18,000 in 2015, and an additional 1.1 million people projected to move into the metro area by 2040, Denver has significant stake in the game.

Denver’s proactive stance toward becoming a Smart City—and more importantly, deciding what that definition will uniquely mean for Denver—is a critical step toward increasing mobility for all residents. And while the perfection that technological advances seemingly provide cannot be everything—the magnetism of our urban environment is created just as much by the necessity of navigating a city’s imperfect, messy conditions—technology will play a crucial role in determining how to tackle some of our biggest urban issues, including those of mobility, access, affordability, and equity.