Last Sunday, a section of Buckley Road in Aurora buckled due to the extreme heat we’ve been experiencing lately, according to a report by 9News. Here’s a photo of the damage, courtesy of 9News: 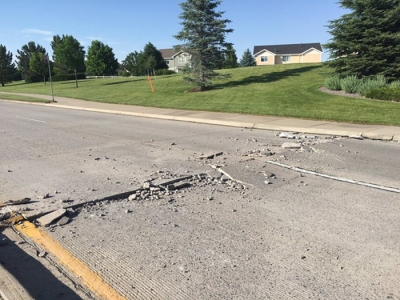 Of course, this is a major public safety issue. Drivers could lose control of their vehicles if they sped over the broken concrete unaware, potentially injuring themselves and others and causing damage to vehicles and property. So, the street was immediately blocked off and street crews were quickly dispatched to fix the situation. By Monday afternoon, road repairs had been completed and the street was reopened. While this particular incident happened to be in Aurora, it could have just as easily occurred on a Denver street, and Denver Public Works would have responded similarly if it had.

And then there are sidewalks—you know, the streets equivalent for pedestrians. If a Denver sidewalk has crumbling concrete or buckled joints that pose a serious trip hazard to pedestrians, does the city of Denver fix the situation as quickly as they would if a street had suffered similar damage? Have Denver Public Works crews rushed into my neighborhood to fix this sidewalk segment down the block from me? 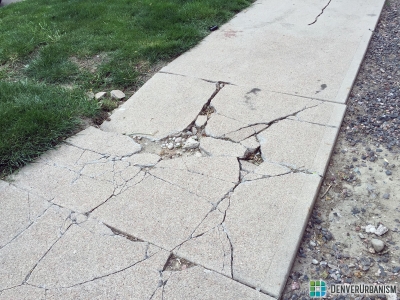 Of course they have not. In Denver, private property owners are responsible for maintaining the sidewalk adjacent to their property, even though the sidewalk is located within the city-owned public right-of-way. Damaged sidewalk segments like the one pictured above can be found ten thousand times over throughout the city, yet there is virtually no enforcement of the city’s sidewalk maintenance policies. According to Streetsblog Denver, the city cited only 16 property owners in 2015 for failing to fix the sidewalks in front of their property.

The solution is not better enforcement of the current policy. The current policy itself is absurd. Can you imagine if the city took the same policy approach and required property owners to fix the potholes in the streets in front of their homes? What we need in Denver is for the city to treat sidewalks as critical transportation infrastructure that’s on equal standing with streets, with the city taking responsibility for the construction and maintenance of our public sidewalk network.

Fortunately, there is strong interest in doing just that, thanks to groups like WalkDenver. The city recently launched the Mayor’s Pedestrian Advisory Committee and District 6 City Councilman Paul Kashmann is leading the Council’s new Sidewalks Working Group to “determine policies and funding mechanisms that will improve our pedestrian infrastructure while making paying for sidewalks less burdensome than our current system….” Even the Denver Post agrees that the status quo is unacceptable.

In my opinion, a citywide sidewalk fee that would generate dedicated revenue for the city to take over the construction and maintenance of all public sidewalks is the most comprehensive and equitable solution. But regardless of whether you support a sidewalk fee or a different approach, if you believe the city’s current policies abdicating responsibility for Denver’s sidewalks are unacceptable, please contact Mayor Michael Hancock and Councilman Kashmann and let them know that. You should also plan to participate in DenverMoves: Pedestrian and Trails, part of the city’s new Denveright planning initiative.

Walking is the default mode of human transportation. You’d think Denver would make having an outstanding pedestrian network its default transportation priority.