The rapid transformation of Denver’s River North (RiNo) District from industrial thoroughfare to successfully modish commercial, residential and artistic district took another major step this past week with the groundbreaking of the Brighton Boulevard Corridor Redevelopment on October 13.

Hosted by Mayor Michael Hancock, City Council President Albus Brooks—whose district includes RiNo—and the RiNo Art District, the redevelopment project will be completed in four phases and is touted by the City of Denver as another critical opportunity to revitalize Denver’s downtown neighborhoods in an increasingly competitive and vibrant urban environment.

Located along the northern strip of Denver that inelegantly connects downtown to the I-70 corridor, Brighton Boulevard and its history is nearly as old as Denver itself, with its first developments taking place in the mid-1870s. By post-World War II, the boulevard was primarily sprinkled with industrial, commercial and automobile businesses, which over time slid from a cohesive streetscape into an area wrought with growing inattention and vacancy.

In more recent years, as nearby streets in RiNo—primarily Blake, Walnut, and Larimer between 25th and 34th streets—began to receive city-wide attention for their artistic, gritty vibe and potential as a collective haven for innovative businesses, restaurants and galleries, Brighton Boulevard began to develop in a similar yet distinct pattern, one that favored creative and eclectic mixed-use spaces such as The Source, Industry and nearby Taxi across the South Platte River.

However, despite the success of its several artisan markets and shared spaces, Brighton Boulevard still lacked many aesthetic, safety and transportation features necessary to make it more attractive for investment that could result in a proliferation of residential, commercial and business use. Such amenities include improved sidewalks, adequate street lighting, landscaping and infrastructure, such as bike lanes, that encourage multi-modal transit. 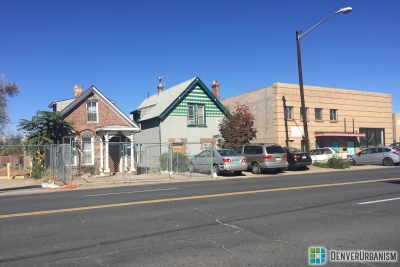 This will soon change with the now-launched redevelopment project, which will take place in four distinct phases, the first of which will address improvements from 29th to 40th streets, including the addition of six signalized intersections at 29th, 31st, 33rd, 35th, 38th and 44th streets; 80 on-street parking spaces; sidewalks on both sides of the boulevard; a continuous bike lane in both directions; pedestrian crosswalks; street lighting; and light fixtures, benches and native plant landscaping. Further, it should be noted that an affordable live/work and mixed use building for creatives is being developed at 41st Street and Brighton Boulevard so as to preserve the artistic character that originally made RiNo an attractive place for investment.

Phase one of the project—which includes three distinct stages of construction to tackle the noted improvements—is anticipated to take 18 months to complete, with the final stages of landscaping wrapping by Spring 2018. Kiewit Infrastructure Company out of Omaha, Nebraska will serve as the builder.

The final three phases of the redevelopment—not yet slated with many hard dates, but which will address 40th-44th streets, 44th-47th streets, and 47th Street to Race Court—includes addressing the part of Brighton Boulevard that serves as an underpass underneath I-70 (in concurrence with the I-70 reconstruction), as well as the fourth and final phase coinciding with enhancements made via the National Western Center Master Plan. Construction for this final phase is expected to begin in 2019.

Typically, the largest hurdle that public infrastructure investments of this size face is coming up with the financing to realize its intended vision. However, that river appears forged for Brighton Boulevard, with a committed $26 million investment from the City and County of Denver, including $2.5 million proposed in 2017 alone. The Brighton Boulevard Corridor Redevelopment will also benefit from an additional $3 million raised by the RiNo General Improvement District, which is responsible for financing the pedestrian-scale lighting, plantings and benches along the boulevard, in addition to maintenance costs once the project is completed.

Overall, this contribution signals a significant financial bet for the city, with Brighton Boulevard being one of largest Capital Improvement Funds projects in the city’s 2017 proposed budget. Comparatively, other capital investments projected for 2017 include sidewalk gaps and safety repair budgeted at $2.5 million; bike infrastructure at $500,000; South Broadway multi-modal improvements at $470,000; and traffic signal infrastructure across Denver at $3.6 million. For further comparison, one of the highest-profile expenditures for 2017—increased funding for the development and rehabilitation of affordable housing—may include $5 million from the city’s reserves, but will primarily be funded by $10 million garnered from new tax and impact fees.

Overall, the city’s vision for Brighton Boulevard sees residents and visitors no longer needing to make do with an underdeveloped backdoor in and out of downtown, but rather having access to a mainstay gateway between the airport and the urban core that lends itself to increasingly vibrant residential and commercial uses. With the opening of the University of Colorado A Line earlier this year, including the 38th and Blake commuter rail station that lies adjacent to this project, we are eager to see if the intended return on investment occurs, and look forward to monitoring its progress.