Now that the A-Line to Denver International Airport is up and running, the number of people passing through Denver Union Station has increased. This is making the corner of 17th and Wynkoop—the historic station’s downtown-facing portal and popular tourist photo-taking spot—busier than ever, with bikes, cars, taxis, pedicabs, tour buses, delivery trucks and pedestrians seemingly navigating the intersection at the same time. This slow but continuous dance of people and their transport machines gives the corner an urban energy that reflects the vitality of the Union Station district and Downtown Denver. However, the standard crosswalks, bike lanes, and other design and regulatory elements in place at the intersection were too minimal, confusing, ineffective and/or biased in favor of the automobile.

In fall 2015, my fellow Union Station Advocates board members and I decided to push for pedestrian and bicycle safety improvements to the 17th and Wynkoop intersection in anticipation of the A-Line launch and the other FasTracks lines opening later this year. We held a public meeting and spread the word about the issue, as described in my post from last October, 17th and Wynkoop: Downtown’s Most Important Pedestrian Intersection? Fortunately, Denver Public Works shared our views on this and put a rapid-response team in place to plan, design, and implement a package of high-visibility, lower-cost improvements for the intersection in just a couple of months! Public Works was very responsive and great to work with—particularly planner Riley LaMie who led the planning effort—and, just in time for the A-Line opening, 17th and Wynkoop has been upgraded to a much more pedestrian/bike-friendly intersection. Here are a few before-and-after shots:

The new crosswalks are certainly more visible, and the painted bulb-outs with bollards significantly shorten the pedestrian crossing distance. The new painted bulb-outs also prevent cars wanting to make a right turn from illegally using the parking lane as a right-turn lane by squeezing between the sidewalk/curb ramp and cars stopped in the through lane. The project also included new parking-lane signs that clearly designate passenger loading zones along the Wynkoop Plaza side of the street: 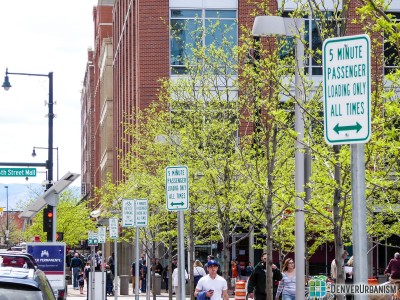 Despite these new signs and street markings, motorists still find ways to do dumb things, like stopping right in the middle of the bike lane to let passengers out…

…or driving on the bike lane between traffic and the parked cars:

Nevertheless, these are wonderful improvements that clearly communicate that pedestrians and bicyclists have the priority at the intersection of 17th and Wynkoop!

Shouldn’t every intersection in the city look this good?