With the 2014 opening of the Denver Union Station project, it seems like the epicenter of Downtown shifted dramatically to the northwest. In many ways, Union Station now feels like the heart of Downtown, and this is before next year’s launch of RTD’s new rail lines and the completion of almost a dozen more infill developments in the area.

As expected with the great success of the Union Station project, the streets and sidewalks around the station have become busier. One intersection in particular—17th and Wynkoop—stands out. Due to the huge appeal of Wynkoop Plaza and the iconic station’s architecture and mix of uses, the corner of 17th and Wynkoop has blossomed into a thriving public space, with pedestrians flowing across the street to and from the plaza and station building. Pedestrians are increasingly “owning” the intersection, and driving a vehicle through there now requires some patience.

The fact that pedestrians feel empowered to confidently occupy the crosswalks and control the tempo of the intersection through their movements is a strong indicator of a successful urban place! At Union Station Advocates, we couldn’t be more thrilled with this situation as it’s exactly what we had hoped would happen. I and other urbanists in Denver believe that the intersection of 17th and Wynkoop is perhaps now the most important pedestrian intersection in all of Downtown Denver. We need to nurture and grow that condition.

Before continuing, let me be clear about an important point: Cities are for people, and especially in downtowns pedestrians must be given the highest priority in the use of the public realm. Downtown Denver was declared a “pedestrian priority zone” by Denver City Council in October 2007; the Downtown Denver Area Plan identified “A Walkable City: Putting Pedestrians First” as one of five vision elements; and the Downtown Denver Pedestrian Priority Zone Plan identified Wynkoop as a Transformative Street—the highest pedestrian-quality street type. Prioritizing the pedestrian is especially important around transit stations, and there are none bigger or more important in the city than Denver Union Station.

Back to 17th and Wynkoop: Unfortunately, not all drivers approach the corner with deference to pedestrians. There are still drivers and bicyclists who operate through the intersection with disregard to pedestrians, particularly when making right turns from Wynkoop to 17th or vice versa. The 2016 launch of the A Line, B Line, and G Line will significantly increase pedestrian activity on Wynkoop Plaza and at this intersection. We need to make sure 17th and Wynkoop and all of the streets around Union Station are well-prepared to maximize ped/bike mobility and safety and appropriately manage cars, taxis, tour buses, valet services, and all other transport options. 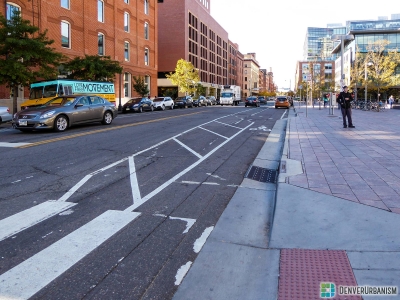 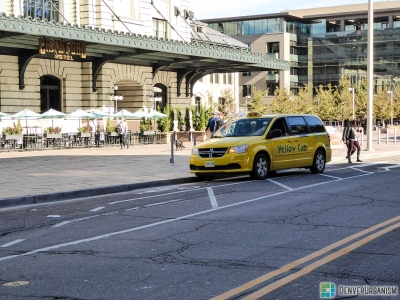 Taxis and other vehicles routinely block the bike lane along Wynkoop Plaza.

Currently, 17th and Wynkoop has the standard crosswalks, signs and other public right-of-way design elements you might find at any regular downtown intersection—nothing that would indicate the importance or pedestrian focus to the corner. With as many as 100,000 people a day expected to flow through the Union Station Transit District once all of RTD’s lines are up and running, it is critical that we proactively plan for the happy onslaught of pedestrian traffic around the station. 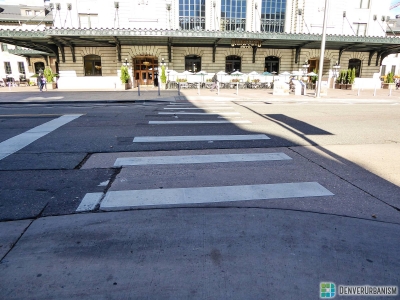 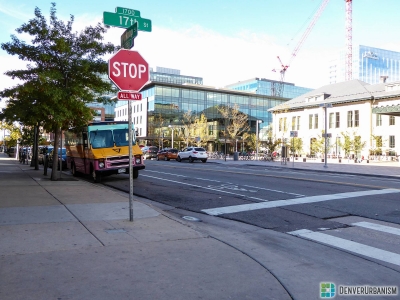 To that end, Union Station Advocates will be holding a special public meeting to talk about options for improved signage, street striping, lighting, parking controls, and other design features that could be installed both in the short-term (before the A Line opening in April) and in the medium- and long-term. We will be exploring options for not just 17th and Wynkoop, but 16th Street and Wewatta Street as well.

Here are the meeting details:

Please stop by to learn what some of the design and regulatory options might be and to give your feedback on how you think pedestrians, bicyclists, and vehicles of all types should be managed around Union Station. Representatives from Denver Public Works will be there to hear your ideas and to provide additional information.