Back in 2010, I was on Google Earth one day wandering over the planet’s surface—a surefire way for many hours to slip by for geography geeks like me—and had the latitude/longitude grid turned on and noticed that the 105th Meridian West cuts directly through Denver Union Station. In fact, it pretty much runs right through the dead center of the station’s front facade. At that time, my fellow Union Station Advocates board members and I were focused on the preliminary designs for Wynkoop Plaza and so I suggested that we should advocate for a public art project that embeds a line marking the path of the meridian across the plaza. Everyone thought it was a cool concept, but it was too early in the plaza design process and we didn’t get much traction on it, so we let the idea go for the time being. 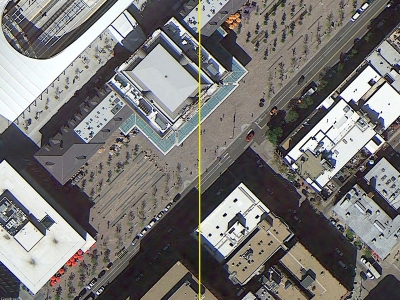 Over one weekend in October 2014, workers embedded a 1-inch-wide stainless steel strip into the granite pavers. My crazy idea from 2010 had become a reality! 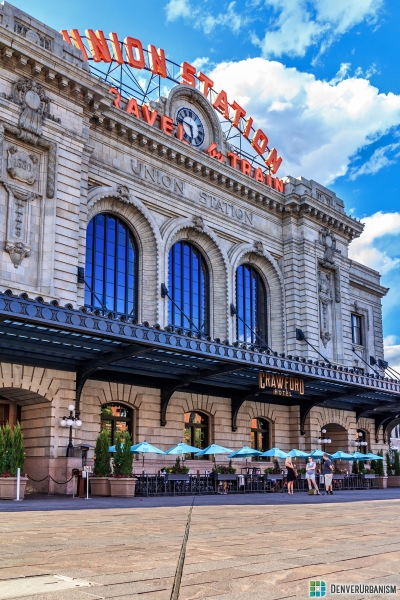 The next issue to work on was the interpretive sign. Virtually no one would know what the line in the plaza represents unless we had some type of sign or marker explaining the situation. After several months of contemplating where the sign should go, what it should look like, how big it should be, etc., we finally settled on a sign to be mounted inside the south entry lobby of the historic station a few steps from where the line crosses in the plaza. I then did a bunch of research, learning more about meridians and time zones than I ever thought I’d know, and wrote the text and developed the graphics for the interpretive sign. My friends and fellow blog contributors Ryan Dravitz and Derek Berardi helped out. Ryan provided the photo and Derek did the graphic design and layout for the sign. Dana Crawford and her team that manage the historic station paid for the interpretive sign and its installation. 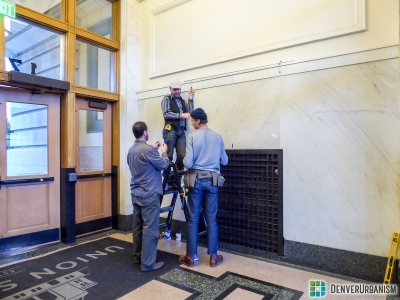 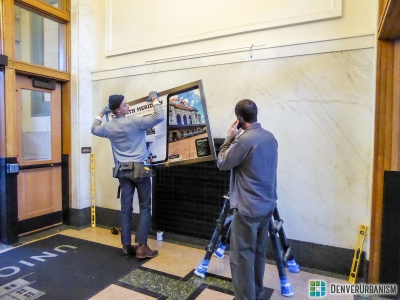 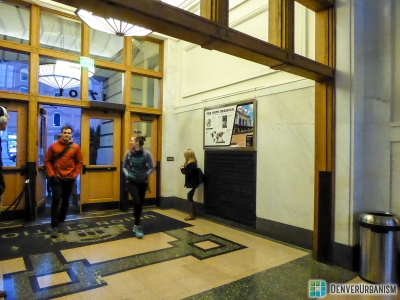 The 105th Meridian West may not be as famous as the Prime Meridian at Greenwich or the Four Corners when it comes to imaginary lines you can visit, but it is a fun curiosity and interesting part of Union Station’s history. I hope next time you’re at Denver Union Station you’ll check it out! Here’s a PDF of the interpretive sign if you aren’t able to make it to Union Station to see it in person. The sign includes a full list of people and firms who helped make the project possible. Thank you to all who had a part in the process!