Exciting news, Denver ped/bike advocates! As part of the new Lawrence Street protected bike lane project, a new floating bus stop is being installed at the corner of Lawrence and 16th Street. Here’s a photo from Friday: 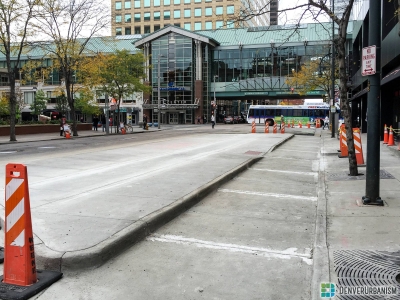 The new bike lane will run between the sidewalk and a new bus stop island that’s “floating” in the street separated from the curb. This creates a much safer environment as it allows bicyclists and buses to avoid weaving around each other near bus stops. Pedestrians, however, must cross the bike lane to get to the bus stop island, so both bicyclists and pedestrians must proceed with caution. To help with that, “Ped Xing”, “yield arrows”, and “zebra-stripe crosswalk” markings will be installed within the bike lane, and “Look!” markings will be installed on both sides of the pedestrian crosswalk ramps, as shown below: 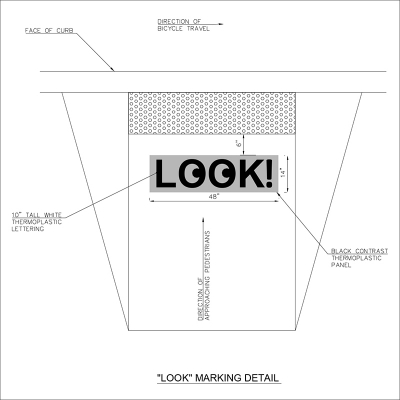 Look! crosswalk markings will be installed at floating bus stops along Lawrence Street in Downtown Denver. Source: City and County of Denver

Floating bus stops of similar design will also be installed at the 18th/Lawrence and 20th/Lawrence intersections.

These aren’t the first floating bus stops in Downtown Denver. They are used in several locations along RTD’s free Metroride route.

It’s great to see Denver is finally stepping-up its game when it comes to more progressive and legible ped/bike/transit infrastructure within the city’s public rights-of-way!