Note: Now that the big series of Doors Open Denver previews have concluded, we are temporarily returning these three popular bicycle posts from March back to the top-of-page position to facilitate more discussion.

Bike Lanes on Low-Volume Side Streets

The case for concentrating our bike network planning on smaller, side streets is one that is equally as compelling as the case for focusing on large streets. However, that is not to say that we have to simply choose one option or the other.

Take Portland, for example: a city home to one of the most comprehensive bike networks in the country. They have focused much of their energy on public greenways: transforming small, low volume streets parallel to larger thoroughfares into neighborhood bike lanes. These greenways are more than just sharrows; they’ve actually built infrastructure into the streets. But they provide a safer bike route for people who don’t want to blow through at 25 mph. Additionally, this low-stress network connects all types of people on bikes to some of the city’s larger, more robust bike lanes and infrastructure such as the recently unveiled bike/ped/transit-only Tilikum Crossing Bridge. 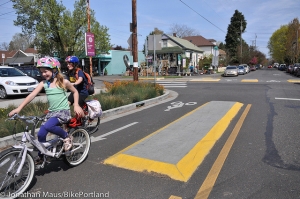 *Example of one of Portland’s public greenways, courtesy of Bike Portland (source)

Focusing on smaller parallel streets such as Grant or Bannock isn’t just an option apart from Broadway, though. Actual infrastructure (buffered lanes) on these streets can provide necessary support for larger infrastructure projects in the city, such as Broadway. They provide a safer (both perceived and actual) route for the “interested but concerned” potential bike riders in the city as well as vital access for shorter trips.

According the 2009 National Household Travel Survey, 43.1% of vehicle trips in the US were three miles or less. If we were to create a system of “neighborhood greenways” to support larger, more intensively built bike lanes like the ones proposed on Broadway and Brighton, we encourage biking to people who are just running daily errands in their own neighborhoods. That keeps more cars off roads like Broadway and expands access to non-traditional bikers.

The debate over bike network planning on large versus small streets is an important one, with many successful examples of both. But, in the end, they two are not mutually exclusive. We need both types of infrastructure to create a robust and equitable network, which in the end, is everyone’s goal.