Denver, along with a number of US cities, is in the midst of a renaissance. Fueled by migration patterns in which young adults and baby boomers are choosing to move into cities for more sustainable lifestyles, Denver is growing and the people moving here are more and more inclined to walk and bike and take transit rather than rely on single occupancy vehicles for transportation. The result has been an increased vibrancy and quality of life for many urban neighborhoods. As more and more people have chosen to walk and bike for transportation in the center city neighborhoods, we have also seen an increase in conflicts between motorists and other users. 2013 has seen a rise in pedestrian/auto accidents, and I hear often of the frustration experienced by motorists as people on bicycles cruise through stop signs and lights without stopping.

In response, the city launched an awareness campaign this spring on the premise that people on bikes and people who are walking are hard to see so all users need to pay more attention.  Bright yellow billboards and spoke cards with rules of the road were produced and distributed throughout the city. Downtown Police districts increased patrols ticketing cyclists for not obeying stop signals and motorists for dangerous driving. While these efforts have their place and undoubtedly do some good in changing behaviors for people, at least temporarily after receiving a ticket, they are not going to change the behavior of the majority of people when riding bikes. For this to happen, it’s essential to understand why people on bikes ride the way they do. Why does a person who would never dream of running a red light in a car think little about briefly scanning an upcoming intersection and then riding through a stop sign or red light? As an urban cyclist, I see this behavior every day, and breaking the law is common among people riding bikes in Denver.

This is not the case in all cities. When I have visited European cities, I rarely see a person on a bike run through a stop light. So what’s the difference? The European cities have built infrastructure that allows people on bicycles to get to their destination in an efficient manner without compromising safety. In Denver, we have spent decades designing bicycle routes and paths for recreation, but only recently for transportation. The majority of our bike routes are on quiet side streets with slow speeds and frequent stop signs. This is fine if you are out for a Sunday ride to the park. But if you are actually trying to get somewhere fast, like to work or a date or school, the constant starting and stopping motions increase travel time and energy expenditure to the point that many people on bikes will no longer obey the stop signals.

To demonstrate this, I performed a little test of travel times on East 16th Avenue versus East 17th and 18th Avenues from Denver’s East High School to Broadway. East 16th Avenue is the designated bike route with bike lanes, low auto traffic volumes, and stop signs or stop lights at the majority of intersections. East 17th and 18th Avenues are the parallel one-way arterial streets designed to move auto traffic quickly.

For the test, I road both directions on 16th, 17th and 18th Avenues three times and took the average speed I was able to travel, the time it took to travel the distance, and the number of times I was required to stop while following all traffic laws. The results are summarized in the table below:

The impact on cyclist behavior is easy to understand if you think about how you choose your route when driving a car. Imagine if you had to drive a 10 mile commute to work using side streets with slow speeds and stop signs every other block. At some point, the constant starting and stopping motion would become annoying. This is why people in cars do not choose to drive through residential neighborhoods for long distances. They find the arterial roadways where they can move quickly and smoothly through the city to reach their destinations. Well, people on bikes want to do the same thing. Unfortunately for people on bicycles, choosing to ride on an arterial roadway can be frightening and dangerous and very annoying to fellow road users in cars with the capability of moving at much higher speeds. So, as any species that has made it this far along the evolutionary chain, people on bikes in Denver have adapted to their environment. Far more people still choose to drive rather than bike or walk because our infrastructure does not yet support biking and walking as viable forms of transportation.

Most of the approximately 2.5% of us who do bicycle for transportation have adapted to ride the safer quiet streets in an efficient manner. This means treating stop signs and stop lights as yields. Doing so is illegal in Denver, but cities such as Breckenridge, Aspen and Dillon and the entire state of Idaho have changed their laws to make this behavior legal. In Idaho, where the law has been in force the longest, accident rates between motorists and cyclists have decreased, with accident rates dropping 14.5% the first year after implementation of the law (click here to open a PDF report documenting this statistic). Instituting the Stop as Yield law or Idaho Stop Law as it’s sometimes called, is one option for increasing compliance with the law. Just change the law to more closely match the existing behavior. This does not mean people on bikes could blow through stop signs and lights. It would still be their responsibility to yield to pedestrians and auto traffic when applicable. The drawback to this option is that having different laws for different road users can be confusing and can create a sense of unequal treatment.

Another option for addressing the issue is to engineer our bike routes in a way that makes the safest route the fastest route. Two engineering options are currently being used to accomplish this in cities around the world: bike boulevards and protected bikeways. Bike boulevards are quiet streets that have been engineered to encourage bicycle traffic and discourage auto traffic by turning stop signs toward intersecting streets, installing auto traffic calming tools such as roundabouts at intersections, and adding signage and markings that clearly denote the bicycle priority of the street.  In this scenario, the route that feels safe—quiet neighborhood streets—becomes the fastest route. The result is a street where people on bicycles can move quickly through the city without constantly starting and stopping on a street that is quiet and free of fast-moving auto traffic. Denver will see its first bicycle boulevard installed this coming year along Knox Court in Southwest Denver.

The second engineering solution is to create a system of protected bikeways on arterial streets. A protected bikeway is usually located on a busier street and has a vertical separation component between the auto traffic lanes and the bicycle traffic lanes. In this solution, the fastest route becomes a safer route. The increased separation between the cyclists and the motorists encourages people who would usually choose to bike on quieter streets and run the stop signs for efficiency to, instead, bike on arterial roadways that are designed to move traffic quickly through the city without the need to constantly stop and start every block or two. Denver has started installing its first substantial bikeway along 15th Street in Downtown Denver. The facility is scheduled to open the week of August 26th if all goes well. 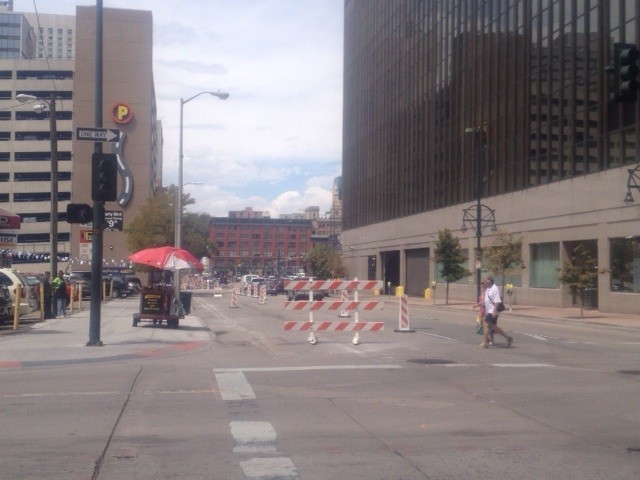 Construction has begun on Denver’s first bikeway along 15th Street through Downtown Denver.

If these two pilot projects for moving people on bikes quickly and safely through the city can lead to a system of fully connected bikeways and bike boulevards, then people on bikes in Denver may just adapt again to ride legally on infrastructure that recognizes that they, just like people driving and walking, want to get to their destination in the most efficient way without compromising safety.

Infrastructure that fails to recognize this very basic concept is the root of the bicycle law non-compliance problem in Denver. Ticketing people on bikes and running promotional campaigns is like chopping the head off a weed. Unless you address the root of the problem, the solution will be temporary at best. Implementing a system of bicycle boulevards and protected arterial bikeways is an essential part of the solution. I trust that with the installation of the 15th Street bikeway and the Knox Court bike boulevard, Denver is pedaling in the right direction.