There are significant advantages and disadvantages to building bike lanes on streets like Broadway and Brighton. From the perspective of bike advocates, the most obvious advantage is the visibility of the lane as a political victory. The effect of claiming one of Denver’s most important arterials is resounding. It sends a message, loud and clear, that bikes matter; that people on bikes deserve part of the road; and that, as a transportation mode, they’re just as important as people in cars.

Check out this protected bike lane in Vancouver. It’s beautiful, and has increased bicycle traffic along this route by 19% per year since 2010–but are we willing to build this intensely on our major arterials? 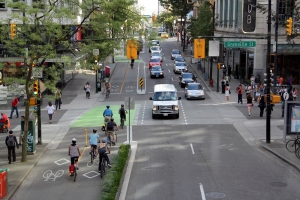 How much work and investment does it take to build a good bike lane on Broadway? And if the lane only attracts people who are already biking, what have we really accomplished? As I wrote in my last post, any new bike lane that a family with kids doesn’t feel comfortable riding in, is insufficient—plain and simple. The sheer infrastructure that building such a lane on Broadway would require, would be monumental and expensive. A three-foot buffer with plastic bollards-style lane like 15th Street simply isn’t good enough. Have you ever seen families biking on 15th Street? I haven’t.

That is the downside of building bike lanes on major streets: the lanes have to be much more intensive in order to account for existing high-speed, high-volume traffic, and guarantee safety–real and perceived. Overall, they are more expensive to build out entirely, and take a long time to build because of all the engineering and traffic considerations. But, they connect people on bikes directly to their destinations, while facilitating more low-speed traffic (bikes and pedestrians) on retail corridors.