MARCH 5 UPDATE: JG Johnson Architects has finalized the renderings for Turntable Studios.  The three photos posted below include the final sign design and color scheme for the building.

Denver’s first micro-apartment building is under construction! The project is called Turntable Studios, and its introduction to Denver’s rental housing mix marks an important step toward expanding the affordable housing options for would-be city dwellers.

Micro-apartments (also called micro-units or micro-housing) have been part of the housing mix in dense international cities like Hong Kong and Tokyo for decades, but they are just starting to catch on in the U.S. Though the maximum square footage varies depending on the source, most authorities consider a one-room apartment unit that is between 150-350 square feet to be “micro.”

There is a reason that micro-apartment development is on the rise. According to a 2012 report from the U.S. Census Bureau, the proportion of single-person households in America has increased by 10% from 1970, and presently accounts for more than a quarter of all households. This rise in single-person households coupled with steadily increasing housing prices has created a new real estate market segment that appears quite willing to sacrifice square footage for affordable rents and desirable urban locations.

Though the concept has not yet reached Middle America, fast growing cities like Boston, San Francisco and Seattle have been offering micro apartments for several years now. Their introduction to the rental market has presented a challenge to city planning departments, who have no previous experience guiding policy decisions that speak to the unique housing arrangement that places kitchen components within mere feet of sleeping quarters. Nevertheless, the demand for affordable urban units in the U.S. is undeniable and Denver will soon have its first offering, courtesy of Nichols Partnership.

Probably best known locally for developing the Spire condominium building downtown, Nichols Partnership is in the midst of adapting the former VQ Hotel building next to Sports Authority Stadium at Mile High into 179 apartment units that will range in size from 330 square foot studios, to 820 square foot 2-bedroom units.

Originally erected in 1967, the 94,000 square foot, 13-story cast-in-place concrete structure stands out because of its unique design. It is shaped like a silo, with the elevator bank at its center and 16 hotel rooms per floor spoking out from the circular hallway.  Each of these rooms is being converted to an apartment unit, complete with a kitchen (featuring full-sized refrigerators and built-in microwaves), a full bathroom with a sliding barn door, and living / sleeping area. 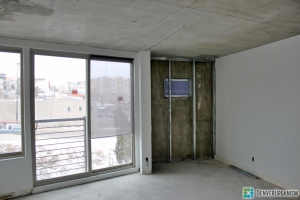 Because of the limited square footage, the unit floorplans had to be carefully arranged. Nichols Partnership  tested the design with a real-life mock-up unit, to ensure the spaces were laid out to maximize livability for the future tenants. 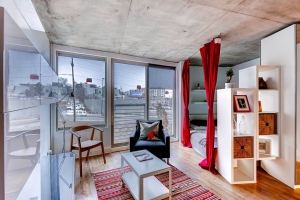 The windows are being re-glazed and each unit will feature a Juliette balcony, so that tenants can open up their doors and enjoy their remarkable view of downtown Denver. 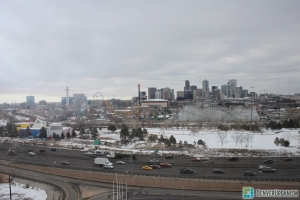 Turntable Studios will offer a variety of amenities, such as a fitness room, swimming pool, and community room on the first floor, along with additional storage space for tenants.  The hotel’s former top floor restaurant space will be converted into penthouse apartment units and a common area. The development prioritizes access to multi-modal transportation, with plans for 144 covered bike racks, and its proximate location to I-25 and two light rail stops.

Property management company Boutique Apartments is already accepting inquiries for the project, which is scheduled to begin leasing in June, 2015.

Be sure to check back for updates, as we will certainly be keeping an eye on the development of this exciting new addition to Denver’s housing mix! Thanks to Melissa Rummel and Jodi Kopke for the tour!