Boettcher Concert Hall was built in 1978 by Hardy Holzman Pfeiffer Associates with the late acoustician Christopher Jaffe as the home for the Denver Symphony Orchestra, now the Colorado Symphony Orchestra (CSO). Boettcher, a part of the Denver Performing Arts Complex (DPAC), the second largest performing arts complex in the U.S., is considered to be an architectural gem and period piece from Denver’s golden age of big-city architecture.

The Boettcher Concert Hall seats more than 2,700 people in five kinds of seating areas,  and was the nation’s first symphony hall in the round designed to place the audience close to the stage in a unique environment: 80% of the seats are within 65 feet of the stage. Boettcher’s walls are canted at a slight angle to disperse sound and prevent flutter echoes. On each curved surface of the hall is a wave-like band, approximately four feet high, technically called an undulating acoustical facia. These facias diffuse, reflect and channel sound throughout the venue. The seats in Boettcher are custom-designed, made from steam-bent plywood with their backs varying in height from 42 – 48 inches. Paul Goldberger, writing in the New York Times, called Boettcher a surprisingly warm room and loved its unconventional design with the orchestra smack-dab in the middle of the hall, allowing the audience to feel as if it is sharing with the orchestra the role of participant in a joyous ceremony.

Here is an image of the Boettcher Concert Hall, courtesy of Doors Open Denver. 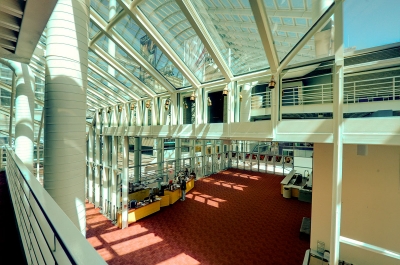 Boettcher currently requires repairs to its mechanical, plumbing, and heating systems, and the city of Denver, with minimal available budget combined with the potential loss of the CSO as a permanent tenant, has changed its focus from renovating Boettcher to a broader DPAC site analysis.