Each of the Library’s three spacious levels has a unique purpose. Level 1 has an entry gallery with exhibitions, conference and meeting rooms, study rooms, an area for children, teens and adults and a collection of more than 45,000 books, magazines and audiovisual materials. Level 2 hosts the Collection Archives and Research Library, as well as a gallery. Housed in the Archival Collection are more than 150 collections which showcase stories of African American musicians, gold miners, cowboys, homesteaders, politicians, physicians, educators, artists, business owners, religious leaders, scholars and everyday hard-working pioneers. Additionally, Young and old students, scholars or the merely curious can have access to the original personal and professional papers, artifacts, photos, and scrapbooks of great African Americans who shaped the West. Visitors to the the library also do not want to miss the Level 3 Western Legacies Museum and Exhibit Space highlighting African Americans who settled in the West. These exhibits tell stories of ranging from early pioneers to present-day heroes, where the public may follow the footsteps of African Americans who settled the West.

Here is an image of the Blair-Caldwell African American Library, courtesy of Doors Open Denver. 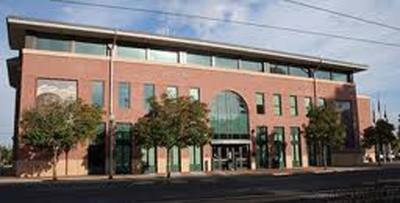 The Blair-Caldwell African American Research Library is the gateway to Five Points and the Welton Street Historic District. The building merges with Sonny Lawson Park via a plaza connecting the two. The Blair-Caldwell AARL is conveniently located immediately across Welton Street from the light rail, and parking is available next to the building. The long three-story brick and glass building with enclosed porch is known for the views of downtown from atop the grand stairway, large bronze and mosaic reliefs on the front facade, and portraits of namesakes Blair and Caldwell. Modeled after Brunelleschi’s Pazzi Chapel in Florence, Italy, The Blair-Caldwell AARL displays traditional masonry forms and modern detailing combine to create a handsome, dignified structure.
Several artists were selected to create unique works of art for the Blair-Caldwell AARL. Two 15-foot bronze and mosaic reliefs representing the noble strength, bearing and pioneer spirit of African American men and women in the West are located in the large niches on either side of the front facade of the Library. These striking sculptures were designed by internationally renowned artist Thomas Jay Warren. Renowned artist Yvonne Muinde was selected to create the mural just inside the library in the entrance foyer.