This past weekend, the West Colfax Business Improvement District (WCBID) celebrated the near completion of a mobility improvement project on West Colfax Avenue between Federal and Sheridan Boulevards. The project, which has been in planning and development for nearly three years, includes new pedestrian-scale signage, seven artist-designed bus shelters and entry monument signage on both ends of the corridor. The project aims to encourage pedestrian traffic and mass transit use on West Colfax and throughout the surrounding neighborhood by connecting people to local parks, light-rail stations and other destinations such as the new Denver Library branch set to open on West Colfax in early 2015.  All aspects of the project incorporate the WCBID’s logo therefore helping to create a brand for the up-and-coming West Colfax corridor. The “W” logo can be seen on the entry monument shown in the photo below. 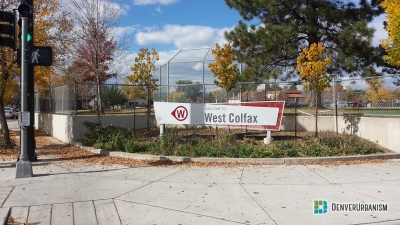 Funded by the Denver Office of Economic Development the new signage, bus stations, and branding is also intended to help jump start additional redevelopment along the corridor. Together with bicycle signage also being installed throughout the neighborhood, these new elements form a wayfinding system that is designed to comprehensively connect pedestrians and bicyclists to neighborhood assets. Together with the bus shelters, these directional signs and enhanced transit amenities support WCBID’s efforts to encourage pedestrian and bike transport in West Colfax and create a more healthy, dynamic and  interactive community culture that will support local businesses.

While this project certainly isn’t as monumental as the recent reconstruction of 14th Street downtown or as pretty as improvements to South Broadway or North Tennyson Street, for example, there is certainly something unique to be seen here. I believe that the exciting thing about this project (unlike so many other pedestrian improvement projects) is that it anticipates the pedestrians rather than simply acknowledging an existing pedestrian presence. As it exists today, there is very little pedestrian traffic on West Colfax, but with new developments coming online including Mile High Vista at Colfax and Irving and the redevelopment of the St Anthony’s hospital, there is potential for more pedestrian traffic in the near future. Additionally, acknowledging and enhancing what little pedestrian traffic is already on the street goes along way toward encouraging more pedestrians to make their way onto the corridor. Putting just a few more people in front of existing businesses and empty storefronts just might be the ticket that sparks additional redevelopment.

Here’s a closer look at the components. 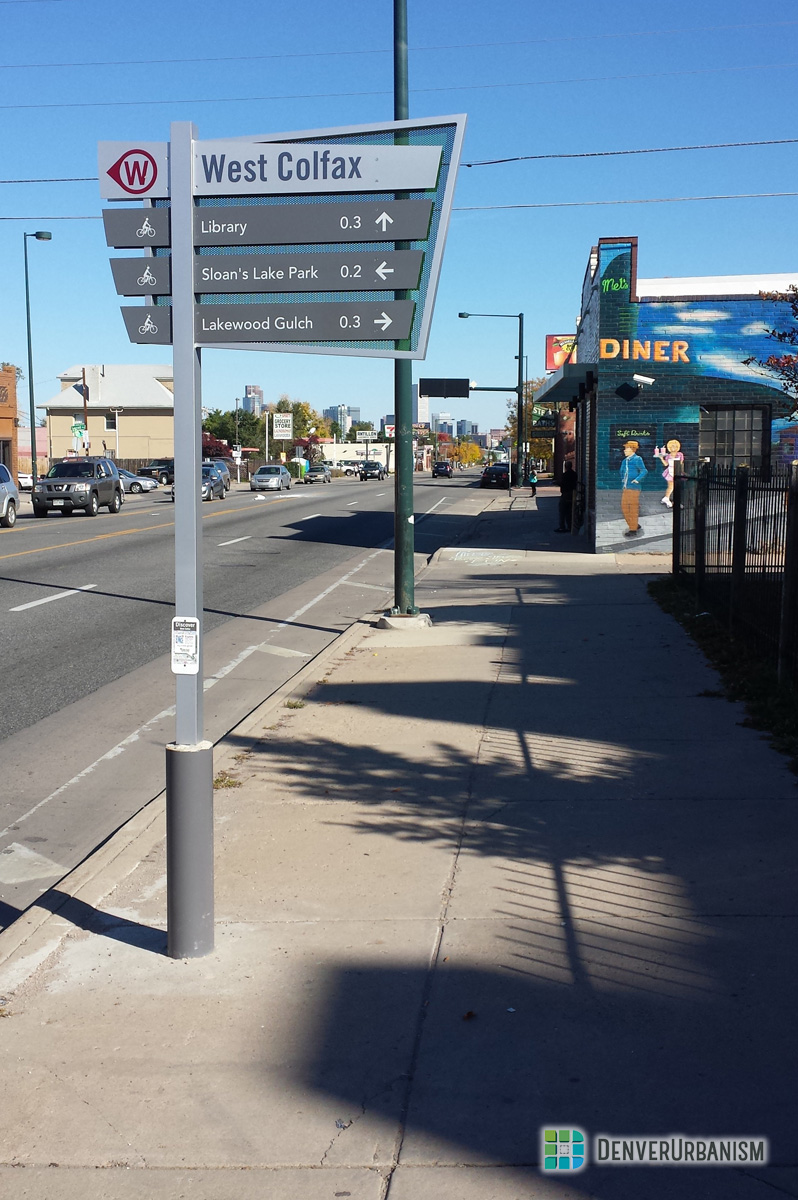 The wayfinding signage (above) and entry monuments designed by Tom Rodgers with Hyperform Design Cooperative (as part of a larger master plan for the corridor executed several years ago) are designed to reflect the rich history of mid-century “Googie” signage on Colfax Ave while also giving the corridor a bold modern look. The entry monument on the east end (pictured earlier) replaced an existing, but tired, welcome sign located at Colfax and Irving, while on the west end of the corridor, Dan Shah of the WCBID somewhat miraculously managed to convince the Walgreen’s corporation to mount an identical sign on the concrete wall surrounding their parking lot at the intersection of Sheridan and Colfax. The wayfinding signs are located on both sides of Colfax Avenue and occur on nearly every block throughout the corridor. They help to continually reinforce the theme set up by the entry signage. 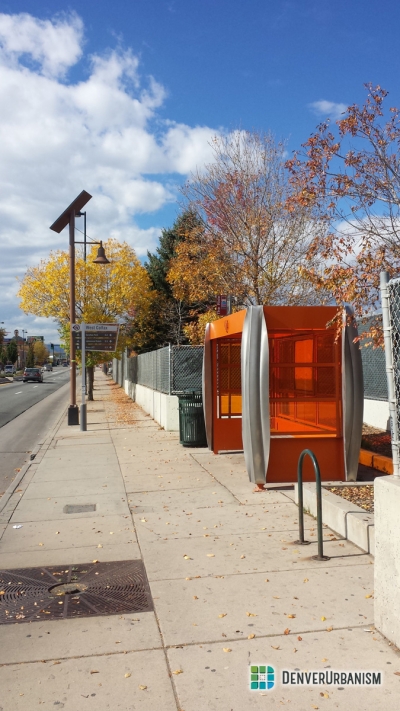 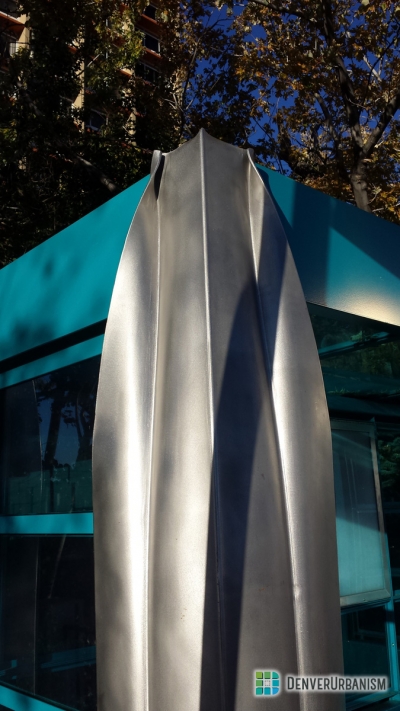 The bus shelters, designed by local artist Emmett Culligan, also pay homage to the mid-century modern car culture with their unique “inflated” stainless steel columns and bright colors (as seen in the pictures above). Each of the seven shelters is painted a different color of the spectrum and has matching plexiglass panels. As you travel down West Colfax from east to west the stations are placed in spectral order from red to purple. Interestingly enough, however, the shelters aren’t actually new. In order to complement the WCBID’s other sustainability goals (you can see the solar streetlight in the photo above) the BID and the artist worked with RTD to refurbish and place seven identical bus shelters along the corridor. This was no easy task as only three of the shelters already existed on West Colfax. In order to create the rest of the set, RTD and the BID swapped out three non-matching shelters from West Colfax with matching shelters elsewhere in the system and pulled one more matching shelter out of storage. A pretty amazing feat if you ask me. Once the refurbished shelters were placed on site, the artist simply mounted his inflated stainless steel tubes to the corners of the existing shelter to finish off the new look (the “inflated” tubes are made by blowing compressed air into extremely hot steel to create the “air-stream” like forms).

So next time you’re traveling by on West Colfax (in whatever transit mode you happen to be taking) check out the new bus shelters and wayfinding signage. And maybe (if you’re so inclined) linger a bit and imagine a fully revitalized corridor complete with shops, restaurants, new housing and, most of all, healthy and sustainable pedestrian street life. It’s not so much of a distant future.