Gas Is Suddenly Cheap(er), and the Reason Is Bigger Than You Think

Gas prices have fallen below $3 per gallon in much of the US, and the explanation isn’t the simple seasonal differences that always make gas cheaper in autumn. The bigger reason: US oil shale deposits are turning the global oil market on its head. 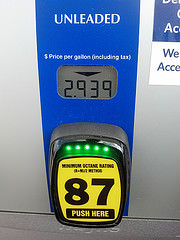 How did cheap gas happen?

In the simplest terms, supply is up and demand is down.

But that’s not enough to explain this autumn’s decline, since gas hasn’t dropped this low in years. China is also using less gas than expected, but that’s also only part of the explanation.

The bigger explanation seems to be that supply is also up, in a huge way. North American oil shale is hitting the market like never before, and it’s totally unbalancing the global oil market. Oil shale has become so cheap, and North American shale producers are making such a dent in traditional crude, that some prognosticators are proclaiming that “OPEC is over.”

It’s that serious a shift in the market.

The annual fall price drop will end by Thanksgiving, just like it always does. Next summer, prices will rise just like they always do. Those dynamics haven’t changed at all.

Likewise, gasoline demand in China and the rest of the developing world will certainly continue to grow. Whether it outpaces or under-performs predictions matters less in the long term than the fact that it will keep rising. That hasn’t changed either.

But the supply issue has definitely changed. Oil shale is here to stay, at least for a while. Oil shale production might keep rising or it might stabilize, but either way OPEC crude is no longer the only game in town.

Of course, oil shale herf=”http://www.businessweek.com/articles/2013-10-10/u-dot-s-dot-shale-oil-boom-may-not-last-as-fracking-wells-lack-staying-power”>isn’t limitless. Eventually shale will hit peak production just like crude did. When that happens it will inevitably become more expensive as we use up the easy to refine reserves and have to fall back on more expensive sources. That’s a mathematical certainty. But it’s not going to happen tomorrow. In the meantime, oil shale isn’t very scarce.

So the bottom line is that demand will go back up in a matter of weeks, and the supply will probably stabilize, but at higher levels than before.

What does this mean?

Here’s what it doesn’t mean: There’s never going to be another 1990s bonanza of $1/gallon fill-ups. Gas will be cheaper than it was in 2013, but the 20th Century gravy train of truly cheap oil is over.

Oil shale costs more to extract and refine than crude oil. Prices have to be high simply to make refining oil shale worth the cost, which is why we’ve only recently started refining it at large scales. Shale wouldn’t be profitable if prices dropped to 1990s levels. In that sense, oil shale is sort of like HOT lanes on a congested highway, which only provide benefits if the main road remains congested.

So shale can only take gas prices down to a little below current levels. And eventually increased demand will inevitably overwhelm the new supply. How long that will take is anybody’s guess.

In the ultimate long term, oil shale doesn’t change most of the big questions surrounding sustainable energy. Prices are still going to rise, except for occasional blips. We still need better sustainable alternatives. Fossil fuels are still wreaking environmental catastrophe, and the fracking process that’s necessary to produce oil shale is particularly bad. It would be foolish in the extreme for our civilization to abandon the progress we’ve made on those fronts, and go back to the SUV culture of the 20th Century.

There will probably be lasting effects on OPEC economies. The geopolitical situation could become more interesting.

In the meantime, enjoy the windfall.