In a formerly quiet west-side neighborhood, there is a building boom underway. In the area bounded by 20th Avenue, Federal Boulevard, Colfax and Sloans Lake Park approximately 10 single-family homes have recently been scraped, not to make room for “McMansions”, but rather to make room for new 2-3 story, multi-unit townhome projects. Thanks to recent zoning changes, relatively large lot sizes and low land values (compared to the Highlands neighborhoods further north) and shifting demographic trends (i.e. young professionals who no longer desire the “house with a big yard” that their parents had), this neighborhood is suddenly undergoing a major architectural make-over. While there are certainly numerous pros and cons to this type of redevelopment, one aspect that I find somewhat unfortunate is the loss of a very unique land development pattern in Denver. While most neighborhoods in Denver were built with rectangular blocks, this area of town has square blocks with a “carriage lot” in the middle.

Back in 1872 when the Potter Highlands (a thirty-six-block residential district bounded by Federal Boulevard, West 38th Avenue, Zuni Street and West 32nd Avenue) was platted it was laid out in square blocks rather than the rectangular ones that predominate the Denver street grid. According to Historic Denver Inc., “this arrangement allowed for houses to face all adjacent streets and to contain a carriage lot (or carriage turnaround) in the center of the block. Many blocks still have communal garages; others have incorporated the central lot into the adjoining properties. About thirteen of Potter-Highlands’ thirty-six blocks still have a distinct central lot.” This distinct block pattern was extended a few blocks north and east of the Potter Highlands and is only replicated in a handful of areas of Denver: Parts of Jefferson Park, Sunnyside, a 15-block portion of South Park Hill and this portion of the Sloans Lake and West Colfax Neighborhoods. The following aerial photo shows clearly shows the relationship between the carriage lot blocks and the standard Denver blocks platted later. 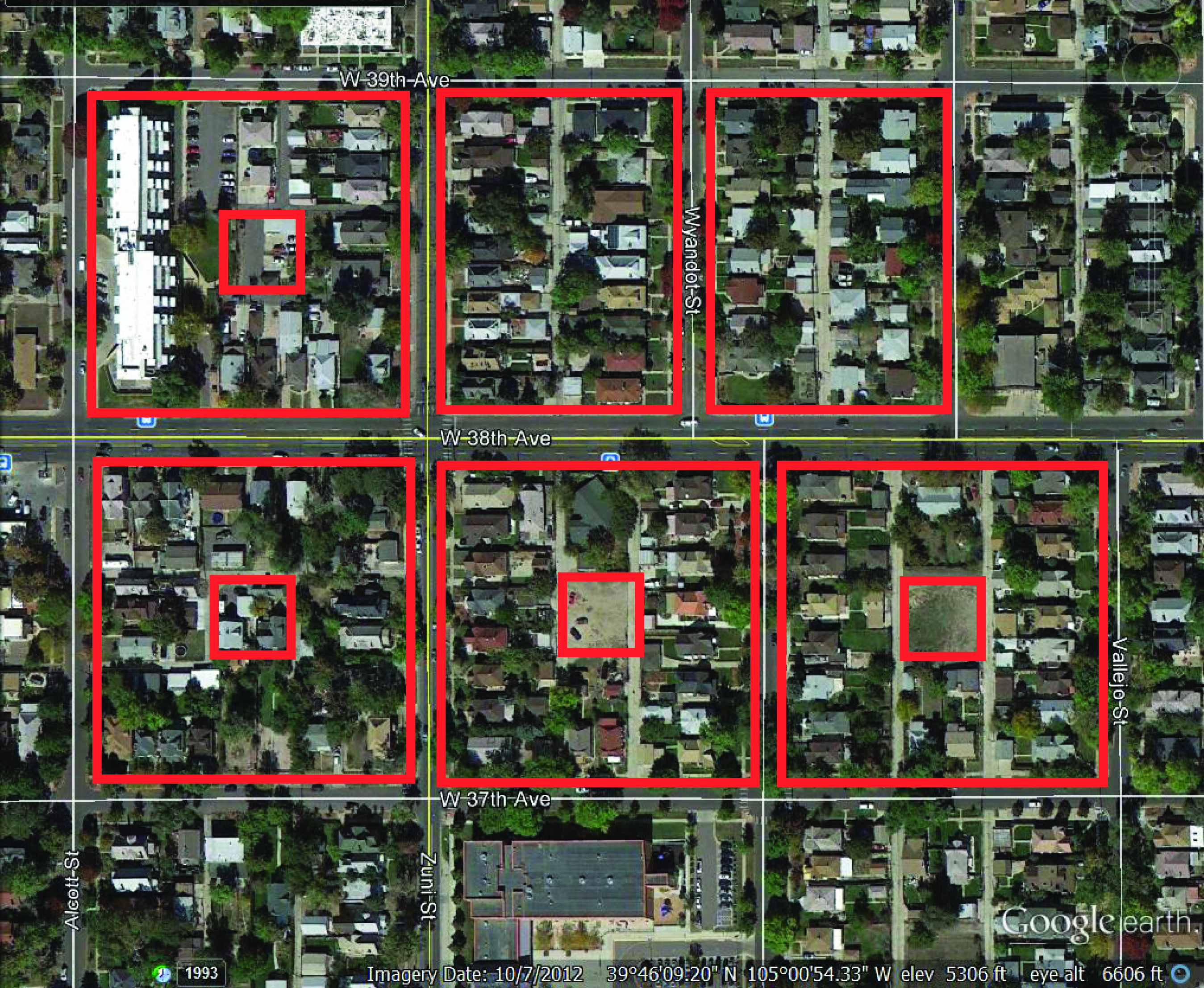 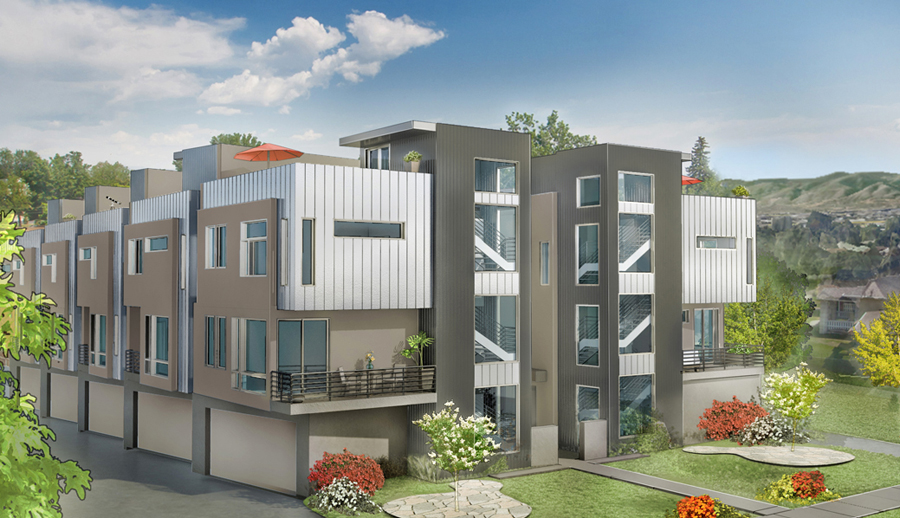 Over time many of these carriage lots have been purchased by adjacent landowners and incorporated into larger yards, paved over for church or school parking lots, or in some cases developed into single-family properties in the middle of the block. Many still remain, however, in various states of use: some are simply open gravel lots, some have become more naturalized over the years with trees and grasses, one that I found still contained an old stone garage (that I imagine once contained horses and buggies). In a few cases, however, they’ve been turned into more informal public space. The photo below shows one that has been turned into a community garden. 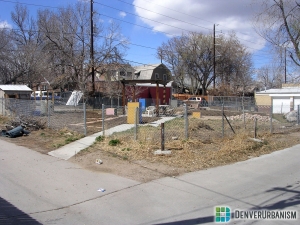 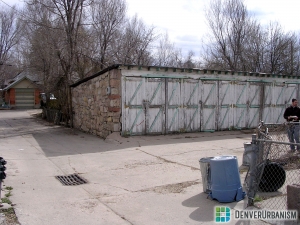 Unfortunately with the new zoning allowing for greater densities in the Sloans Lake/West Colfax section of this square grid, developers have their eyes on these parcels. One has recently been purchased by the adjacent land owner for potential redevelopment and another one that was divided between two land owners long ago is now being built and paved over to make way for the Park Place XII townhomes, a 3-story, 12-unit project that will dominate the center of the block as shown below. In the last few weeks, the unit to the south has also been scraped, likely to meet a similar fate. 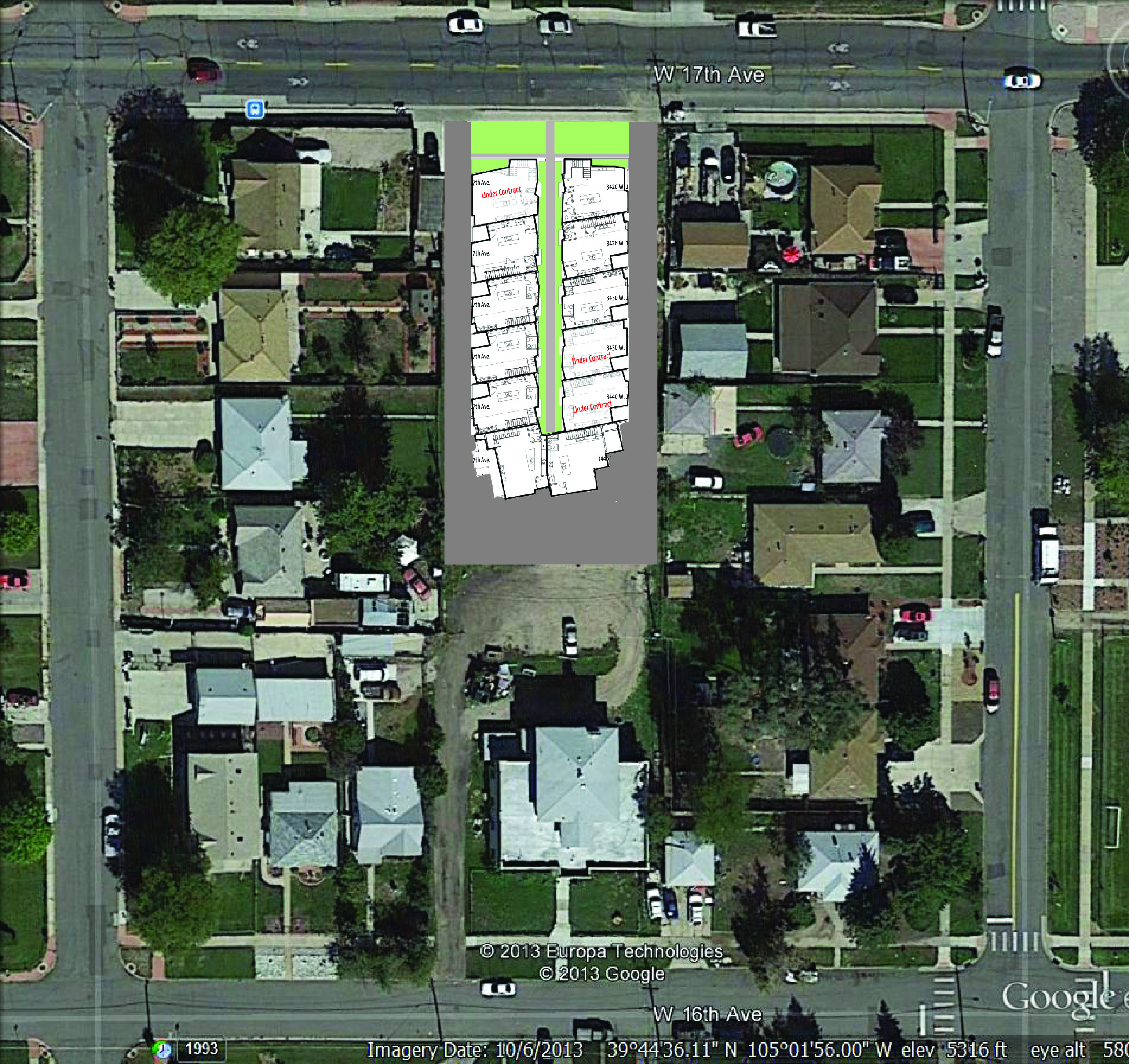 While were gaining density, and increasing land values in the area, I’m afraid we’re also losing an interesting fragment of Denver history, and an opportunity to create more public open space within the community (something that a good number of people in the neighborhood are calling for in light of the new development boom). Since these lots are publicly owned, they could easily be developed into community gardens, dog parks, pocket playgrounds, and communal places of refuge. If we, as a city, invested in a few of these parcels instead of selling them off to the highest bidder, we might not only preserve a piece of Denver history but create places for this new generation living “without yards” to run their dogs, meet their “blockmates,” grow some vegetables or simply relax and enjoy nature away from the din of the street. With two-three story houses on all sides, many of these carriage lots feel like little enclosed courtyards, and could be wonderfully comfortable and enjoyable open spaces: a pleasant surprise to those who find them and/or seek them out. Until then, I encourage you to seek out and explore this relatively unknown piece of Denver’s urban fabric. Check them out before they disappear.