Stop Driving Your Car Around Denver…Drive Somebody Else’s!

In the past few months, Denver has gone from simply having car sharing to fully embracing it. In a city once dominated by Subarus, most people are likely having the dizzying zebra stampede effect with blue and white Smart cars. Some very exciting changes have occurred in Denver that have paved the way for car sharing to become more efficient and useful than ever before in the Mile High City.

While car sharing is not new to Denver, the trend of using it en masse certainly is. This form of transportation came on the line in 2009 in Denver and was originally introduced by eGo. The original concept was to pick up a car in a designated lot throughout the city (normally in a private parking lot). However, the introduction of some game-changer policies/permitting have enabled on-street parking to take car share to the next level. Now, car share companies have the ability to purchase permits which allow them to rent designated spots throughout the city (this traditional model is utilized in the case of car shares that must be rented and returned to the same spot like eGo or OccassionalCar). The other option (in the case of Car2Go) is to permit each individual car with an annual fee and allow them to float to any non-permit parking or meter free-of-charge. The cost of this permit supplements lost meter revenue.

Making it easier through policy for these companies to function in the city has resulted in more cars to drive, but has also made for a diversity of car share models to choose from. As alluded to above, eGo CarShare, OccassionalCar and the future Zipcar service all function on the principle of picking up a car at a designated location, making your trip, and then returning it back to the same location once finished. As this more traditional model expands, even Hertz and Enterprise have placed cars at designated locations around town. These cars are often found to be most convenient during a trip that would take you beyond a 10-15 minute ride. Perhaps your monthly Target trip or a cross-Metro ride make the most sense as they often have an hourly rate.

If you are looking to hop across a few neighborhoods, Car2Go might be for you. With this service, you have the ability to pick up any one of their 300 cars and drop them at a location that’s most convenient for you. This is more a one-way option than a round-trip. If you live in a core neighborhood, it’s unlikely that you’d have to walk further than 4-5 blocks to access a Smart car. Something to consider is that while a cab might cost upwards of $15 (after tip) traveling from South Broadway to Union Station, Car2Go’s $0.38 per minute fee can be expected to cost about a third of that price. 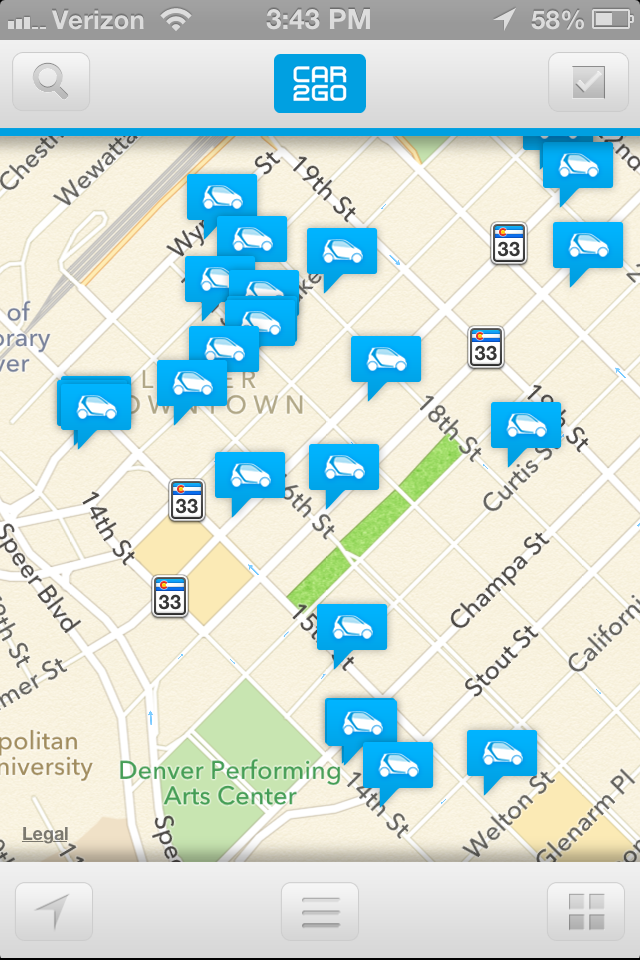 So now that you have a concept of what is available, let’s look at why this is so important for Denver, and for you:

With an ever-increasing mix of transportation diversity, car share continues to make Denver a more accommodating place for the urbanite. Building transit lines and heavier infrastructure takes time, money and public input/planning. Being auto-oriented and very user-friendly, this option deviates from a dedicated line of any form and really opens up the street grid to go just about anywhere in the central neighborhoods. Another perk is that many of the car models used by car shares are fuel-efficient or hybrid, reducing environmental impact. Lastly, sharing one car between dozens of people means fewer cars on the road, rather than every person having their own.

As Robert Ferrin, Parking & Planning Program Administrator with the City of Denver, puts it, “We normally see that this service has the ability to save people money.” Though each company has its own rules and operations, most of them offer a form of insurance, taking that burden off your monthly expenses. Gas is normally part of the deal and refueling can even result in free ride credits. Also, oil changes and general maintenance are no longer your problem. You no longer have to pay meters or deal with paying for a private spot of any sort. The service is also cheaper, and often more accessible, than a taxi. One last benefit is that having the knowledge you are paying for every minute you spend in a car has a way of making you want to drive less. With that, there’s more of an incentive to walk or bike to places within a half-mile or so, rather than paying (and thus keeping more people off the road by encouraging walking/biking).

There are a number of benefits to reap from giving car sharing a chance. It’s the perfect addition to a car-free or single-car household. Paired with a Bcycle membership, or really any other alternative mode of transportation, car share has unlocked a significant portion of Denver’s urban domain. There’s no denying that it’s still easiest to get around our city by car, and now you have a cheaper option to drive without owning (or parking) an automobile!