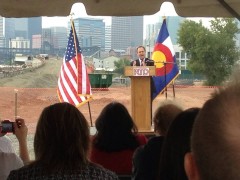 Every speaker spoke of the importance of regional cooperation and how integral the decades spent developing relationships and coordination directly lead to a regional take on a mega-project such as FasTracks. Combined with the relative brevity of everyone’s speeches, it was nice to see the representatives thanking each other and talking of how their respective jurisdictions have worked well together, and not just beating their own chests or tooting their own horns over their individual contributions to the project. 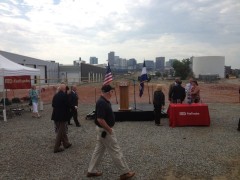 The event was held just behind the Denver Police Department facility at Park Avenue and Globeville Road, site of the Gold Line and Northwest Electrified Segment’s approach into downtown Denver, prior to crossing the South Platte River bridge. As you can see in the pictures above, the skyline provided the perfect backdrop.

Only three more (short) years until the project is complete!!