It’s time to look at both the Platte River Bridge and the Decatur-Federal Station along the West Corridor. The Platte River Bridge is located just west of where our last blog posting ended across Zuni Street near the power plant visible off I-25 just south of Sports Authority Field at Mile High. While the bridge isn’t a feat of engineering or nearly as visible as the CML Bridge we looked at last week, it’s undeniably industrial and somewhat “gritty” look fits well in the area. While the bridge does look somewhat similar to the much larger basket-handled tied arch bridge spanning 6th Avenue out near the Denver Federal Center (seen this West Corridor update), this smaller bridge is much more angular compared to the very smooth curves of 6th Avenue Bridge. Like the 6th Avenue bridge, this bridge is made of “weathering steel” and will not be painted. The protective oxide coating that forms will negate the need for paint and will not threaten the structural integrity of the bridge. Crews are moving forward with laying ballast (rocks beneath the tracks) and securing track as well. 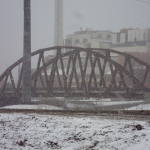 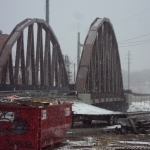 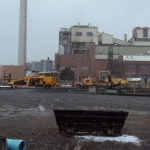 As you travel west across the bridge, a lot of drainage improvements and site work is nearing completion. Crews have worked to clear an old Denver Public Works facility to make room for the train, as well as realigning a bike path and the creek flowing through Lakewood Gulch, which meets up with the Platte River just north of the bridge. The work spans the area between the Platte River and essentially Federal Boulevard. 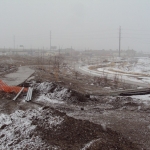 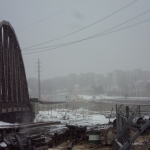 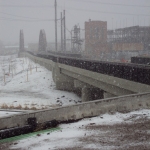 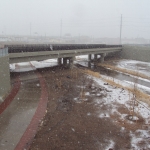 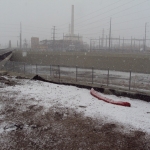 As part of the improvements that have occurred in this area, the Decatur Street bridge crossing the creek has been rebuilt. The tracks cross Decatur Street at-grade as they approach the Decatur-Federal Station platform. 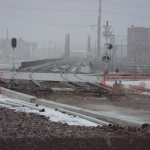 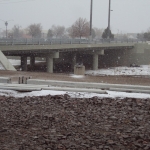 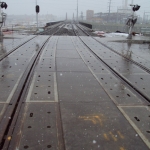 The Decatur-Federal Station will be the second station to serve Sports Authority Field at Mile High – the other being (obviously) the Sports Authority Field at Mile High Station. The Decatur-Federal Station will have the standard RTD station amenities: a main canopy shelter with additional canopies over the disabled access ramp platforms, two ticket vending areas, and bike racks and lockers. This station, the other serving the the football stadium, will boast turnstiles for Broncos games. Crews are moving towards installation of all those amenities, but as you can see below, there’s still a lot of site work to be done before that can happen over the next few months. 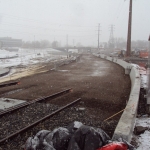 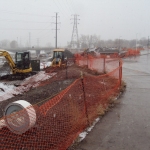 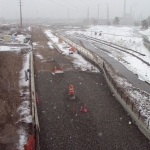 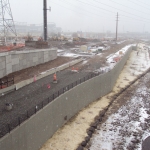 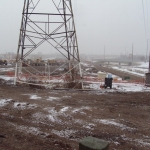 The area near the station platform will be raised a bit away from the gulch, which is prone to dangerous flooding during heavy rains. This is where a mother and her 2-year old son were caught up in a flash flood about five years ago. Unfortunately, the child was swept away and later drowned while the mother was rescued. As you can see, both the light rail platform and bike path are raised away from the water to ensure that a similar tragedy isn’t repeated. 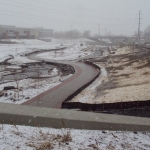 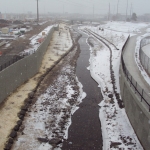 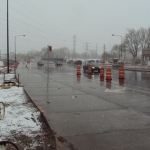 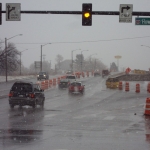 In the next post, we’ll take a look at the work occurring throughout the Lakewood Gulch and Sanchez Park as well as the Knox and Perry Stations.